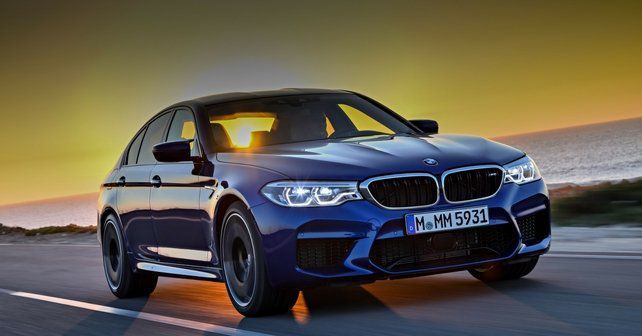 The horsepower wars mean that the brand new BMW M5 gets a full 600 horses. And to reign in all that power, it also gets all-wheel drive for the first time. So what, then, happens to the driving experience? Well, to find out, we strap ourselves into the driver’s seat and hold on for dear life!

The E34 M5 from the mid-90s will forever be remembered for its role in the Hollywood blockbuster Ronin, as it left lesser cars on the streets of Paris in its wake with the rev needle bouncing off the redline – while Robert De Niro’s character gave chase. The fact that the M5 ended up on its roof did nothing to dampen the impact made by this machine as it scythed through traffic and into our hearts. Fortunately, BMW had all the M5’s – through the generations – lined up for us to sample in Portugal when we arrived to try and tame the latest fire-breathing monster conceived by BMW’s M-division. 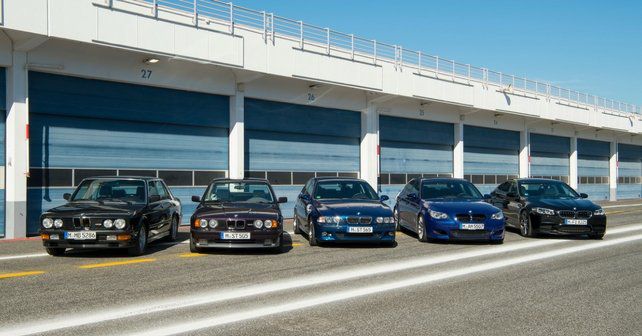 The first-gen, the E28, from the mid-80’s feels like a proper homologation special – with an engine straight out of the first M car, the M1. The second-gen, the E34, also gets a 3.5-litre straight-six – but it feels just mildly fast by today’s standards. It gets a beautifully long throttle pedal that allows you to modulate the delivery of each of its 340 horses. The E39 from the late 90s is the first M5 to get a V8 under the bonnet. 400 horses, a 6-speed manual gearbox, rear-wheel drive and a beautifully balanced chassis – what’s not to like? The E60 had polarising looks, but made up for this by being fitted with an F1-inspired V10 producing over 500 horsepower. Unfortunately, the SMG single-clutch gearbox – also F1-inspired – blunted the driving experience. The previous-gen, the F10, was the first M5 to be turbocharged – its 4.4-litre V8 producing 570 horses. It was fast, undoubtedly, but also felt a little heavy when you got hard on the anchors. Not to mention the fact that you had to be careful with your right foot with the electronic safety net turned off – since all 570 horses are transmitted through the rear wheels.

Our drive started at the Estoril racetrack, by the Atlantic coast in Potrugal – which also happens to be the most westerly point in Europe. Estoril is a former Grand Prix circuit, and a technical one at that. So we set off in groups of three, with the lead car being piloted by BMWs DTM star, Bruno Spengler. Bruno talked us through the first lap on the radio, and when he was confident that we were able to comfortably follow in his (rather swift) footsteps, he flexed his right foot that little bit more – and the floodgates well and truly opened. The car was in 4WD Sport, with traction control and four-wheel drive engaged, but the manner in which it powered out of corners was simply brutal. The grip levels, and the urgency – both on the power and on the brakes – was simply gobsmacking! 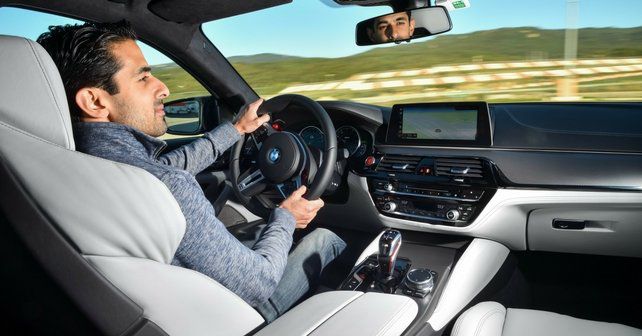 I asked a BMW engineer, subsequently, how they manage to make big and heavy cars like the new M5 – which weighs almost two tonnes – feel half its size, especially at the track. His answer was quite simple. They focus on the immediacy of the response – i.e. no delay between the input from the driver and response from the machine. And that’s something they’ve achieved in spades in the M5. You can simply flick the car through the tight chicanes at Estoril the way you would any two-seat sports car, and the M5 responds instantly. If you had tried that with the previous generation M5, you would have been very aware of its mass in the lateral transitions. Not in the latest car though. You would think, then, that the ride would be brutal on the road – but it just isn’t.

In fact, after our session at the track, we spent some time on the broken country roads along the coast, and found the suspension surprisingly compliant. This being an M-car, you can set up the suspension, transmission, engine and steering individually. With everything, but the motor, set to comfort, it’s a surprisingly comfortable car on the road. Still brutally fast – kidney-bruising, neck snapping fast – but comfortable and compliant all the same.

Even more surprising than the compliant suspension – which, of course, will still be firm at best on our roads – was just how good the four-wheel drive system actually was. So much so that I never felt the need to switch to two-wheel drive. The safety net provided by the four-wheel drive means that you can simply floor the throttle with abandon at the exit of corners and let the system deal with putting all of its 600 horses down to the road – leading to instant scenery-blur. The four wheel drive system is so good, in fact, that you can induce stomach churning acceleration at the exit of every corner – both on the road and track. The central transfer case, with a multi-plate clutch, distributes drive fully variably between the front and rear axel. The rear end also has an electronic differential that is fully variable. So, if you select MDM (M Dynamic Mode), it allows the perfect amount of slip at the rear to induce a single lock of counter steer – just so you can feel fully engaged – before reigning it all in and transferring drive to the front wheel to pull you out of corners. But it’s the manner in which it does this that is so impressive. It doesn’t blunt power in a ham-fisted manner like traction control systems of yore. Between intentionally-induced slip and transfer of power to the front wheels, it’s completely seamless in its operation – all of which means that its stupendously fast in any situation. On the highway, if you gently depress the throttle pedal – to accelerate from 80km/h, say, to the 120km/h limit – before you know it the digital speedo is indicating 180km/h, and rising fast! 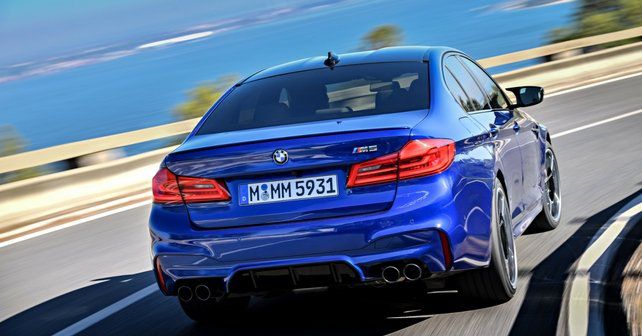 The top speed is rated at over 300km/h, with the optional M-driver’s package. We certainly achieved north of 250km/h on the main straight at Estoril, and the M5 was as stable and comfortable as any car could possibly be. Even when you got hard on the brakes from that speed, it was adjustable and tactile. Thanks to the ceramic brakes, there was simply no fade whatsoever. In fact, the car was completely faultless despite being driven as hard as we could muster for a couple of hours straight.

The only fault I could find with the M5 – with the exception of the steering being too thick in your hands (I’m not sure why the M-division feels overly thick steering wheels denote ‘sport’?) – was that perhaps the new M5 is too fast (if there can be such a thing)! Unless you’re on the Autobahn, you can’t possibly revel in the hyper speeds its capable of. And unless you’re on a track, you can’t possibly get anywhere near its stupendous limits.

This was, of course, in stark contrast to its predecessors – which we got to sample side-by-side. The older M-cars are nowhere in the same realm in terms of speed, but they’re tactile, chuckable and adjustable on the road – which makes them involving and fun to drive. The latest M5 is no less fun, it’s just that you’re doing double the speed limit to get anywhere near exploring its performance potential. 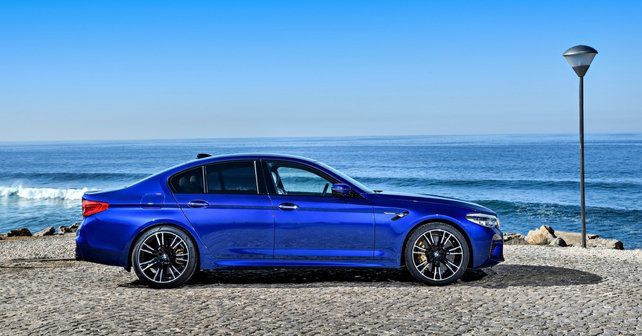 But, if you want a machine that defies physics, breaks all performance barriers for a hyper fast saloon, and simply looks the business, you better start saving fast. And that piggy bank simply isn’t going to do it. You better take a crash course in crypto-currency trading if you want any chance at the kind of windfall that could possibly put this car in your garage. Oh, and you have till Auto Expo in February next year… Happy Trading!

X-Factor: Supercar grip & speed, as well as luxury car space & comfort – all in one package.