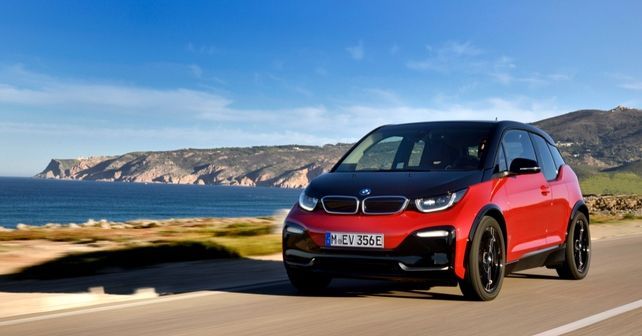 Four years after its launch, the BMW i3 still looks like the future of motoring. Nevertheless, it’s been recently refreshed – and it’s soon to be heading our way.

We first drove the BMW i3 four years ago in Amsterdam, right after it’s global launch. And rather than driving like a washing machine on wheels – as do some other EVs – it actually drove very much like a BMW. And since it’s an EV, it produces full torque and power at zero rpm – so it’s quite quick off the line. Its carbon fibre-reinforced passenger cell means that it’s light, which only adds to the performance. And since the battery pack is in the floor, the centre gravity is low and the handling is very good. All of these traits make it feel like a proper BMW – and not one that has to resort to flying the green flag to make up for its dynamic shortcomings.

But fly the green flag it does. In pure EV form (in Europe, it also comes with a range-extender petrol engine), not only is it a zero-emissions vehicle but the production process is also quite green. You see, it uses a lot of recycled plastics, renewable materials and natural fibres wherever possible – such as in the cabin. In fact, over 80% of the surfaces visible to passengers are made from recycled materials or renewable resources. BMW is also experimenting with other, even more sustainable materials, such as recycled textiles to be used for seat covers and insulating mats, as well as recycled waste sea plastic for several interior and exterior parts. 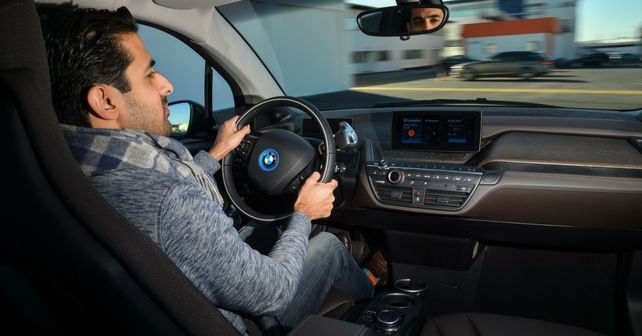 In addition, the manufacturing process is also highly innovative and advanced. In fact, when BMW first launched the i3 four years ago, they became the first company to industrialise the use of carbon fibre in the manufacturing process. This helped them develop the carbon-core of the flagship 7 Series as well. And, till today, they remain the only automaker to use carbon fibre in mass produced vehicles – if you can call the 7 Series and i3 mass-produced that is.

This time, we were in Portugal to try out the i3s – the new sporty variant of the i3. It gets a little more power, as well as stiffer suspension with especially developed springs, dampers and anti-roll bars. Plus, the ride is dropped by 10mm over the standard car. It also gets a Sport mode that sharpens the throttle response and steering. On top of that, there’s also a Dynamic Traction Control (DTC) mode that enables a little bit of slip at the rear when you’re really pushing.

Sure, you wouldn’t think that an EV would lend itself to being hustled about, but that’s exactly what BMW DTM racing driver Bruno Spengler was doing at a purpose built track that had ben set up in the parking lot of the Estoril racetrack in Portugal. One section had even been wet down to demonstrate how the DTC mode reacts when instant torque meets low adhesion! When I got behind the wheel for a couple of quick laps, I was quite impressed as the i3s was more than happy to fly through the cones.

What happens when you put a racing driver behind the wheel?

But when Bruno got behind the wheel, I was simply amazed that an EV could be hustled in the manner that BMWs DTM ace was doing. He was flinging the car this way and that with complete abandon, and the i3 was simply taking it all in its stride. The slim tyres (175/55 R20 in front and 195/50 R20 at the rear) have so much more grip than you could possibly imagine. The chassis is completely planted, and the power delivery is quite addictive. The only trouble is that it offers no feel whatsoever so you only realise where the limits are by pushing until you simply can’t anymore. All said and done, though, the performance is so much more than you expect from an electric city car. 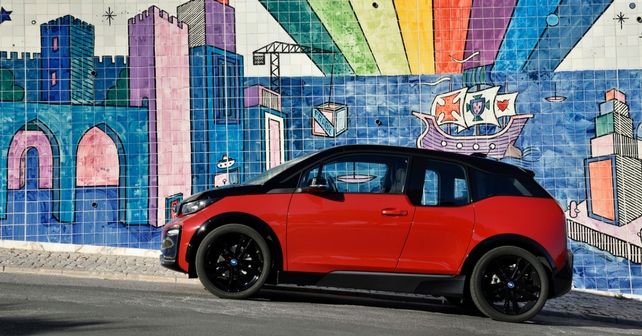 There are some limitations though

It does have its limitations though. If you push too much for too long, the i3s resorts to a kind of a safe mode that cuts power to preserve the batteries. If you ask the batteries to deliver all their available juice for extended periods of time, they overheat and have to be cooled down by cutting power. The liquid cooled high-voltage lithium ion cells are tightly packed together, so thermal management is still seemingly a work in progress. Of course, if you want to attack a country road, you would buy a hot hatch – not an EV! The i3 is, of course, aimed as a city car – and it does that job very well indeed. The turning circle is impressive, and you only really need to use one pedal to accelerate and brake in the city. The aggressive regenerative braking to charge the batteries means that it feels like you’ve applied the brakes as soon as take your foot off the gas. This takes some getting used to, but effectively means that you never really need to touch the brake pedal in the city – unless you need to come to a quick stop that is.

The i3 silently sliced through the tight lanes of the old quarter of Lisbon, with a turning circle that was especially impressive. The ride, however, on the stiffer suspension of the i3s, was punishing on the broken streets of Lisbon. The standard i3 too feels a little stiffly sprung, but far better suited to our conditions.

Heralding an EV revolution in India?

It’s no secret that, in India, we don’t have the infrastructure in the form of charging stations to support the electric car revolution, which the government hopes to herald. But every market has to start somewhere, and so the likes of BMW and Hyundai already have plans to launch full EVs in India in 2018. In fact, expect BMW to launch the standard i3 (which has also just been refreshed) at the Auto Expo in February 2018.

So, all you early adopters out there better start making space for a BMW ‘Wallbox’ in your driveway in order to charge your future electric car. The charging time takes anywhere from 40 minutes on a 50kW fast-charger (for an 80%) charge to as much as 12-hours from a standard 220V domestic power outlet. With a 7.4kW wall-box that charging time can be dropped to under three hours. The range in everyday driving is claimed to be 200 kilometres. And, even if you factor in stop-and-go traffic with the air-conditioner on (which can, at times, even cut that range in half), you should be okay for your daily commute at the very least. 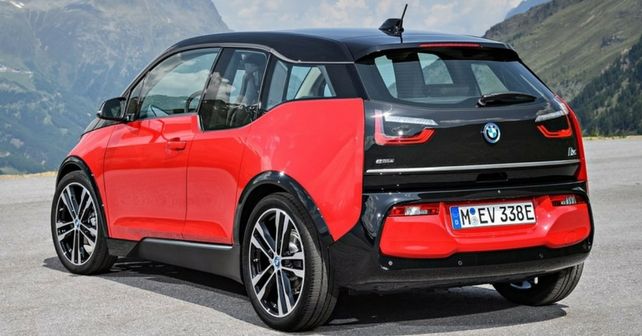 So, if you’ve been waiting for an EV that not only looks cool (from the back, the i3 looks like Darth Vader’s helmet with its tail lights embedded into the black tailgate), but is also fun to drive – in the city at least – look no further than the new i3.

With the meagre benefits that an electric car receives, as a CBU, the i3 will be expensive of course – but it’s a start. The road to an electric car future is a long one, and the i3 goes quite some way towards making that future more acceptable – interesting even – than any other EV on the Indian market so far.  So, stay tuned for more in a few months’ time.

Range: Up to 200kms in everyday driving

X-Factor: The i3s does its best to live up to the blue-and-white propeller badge on the bonnet – so it’s an EV that won’t put you to sleep from behind the wheel.