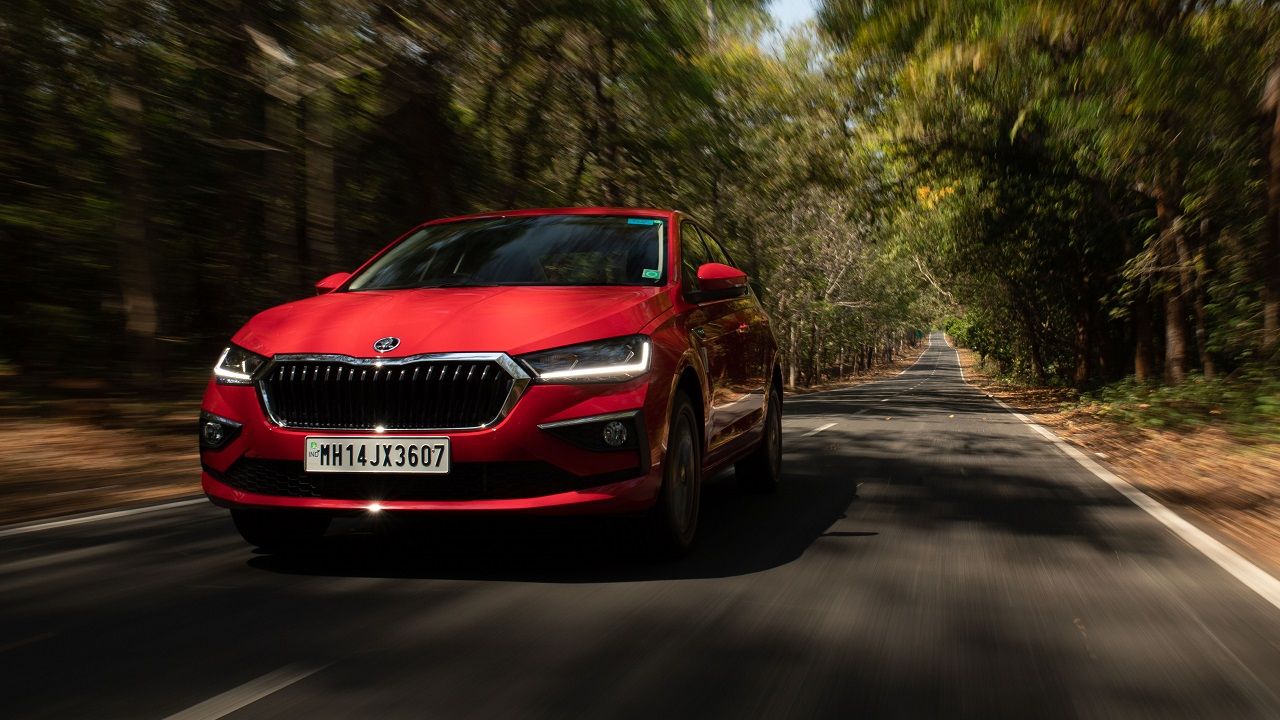 With the swanky new Slavia, Skoda wants to make sedans great again. But can it really happen, or will the Slavia get lost in the sea of high-riding SUVs? We drive the 1.0 TSI version to find out!

Betting on a sedan to win car buyers at a time when SUVs rule the day is like hoping Ukraine to defeat Russia in the ongoing war. An improbable and highly unlikely scenario, but then who doesn’t fancy a great underdog story? With the Slavia, Skoda India is hatching a similar plan. It's swimming against the SUV tide, and despite all the odds, the Czech carmaker is determined to make sedans great again.

On the face of it, Skoda does seem to have done its homework properly with the Slavia. Based on the same MQB A0 IN underpinnings as the Kushaq SUV, the brand-new sedan replaces the ageing Rapid and comes across as a formidable package – the Slavia’s got a stunning design and a potent duo of TSI engine options on offer, and it promises to be an involving car to drive. In addition to that, it’s also got a spacious, well-equipped, and practical cabin. But are these traits good enough to rid Indians of their SUV obsession? 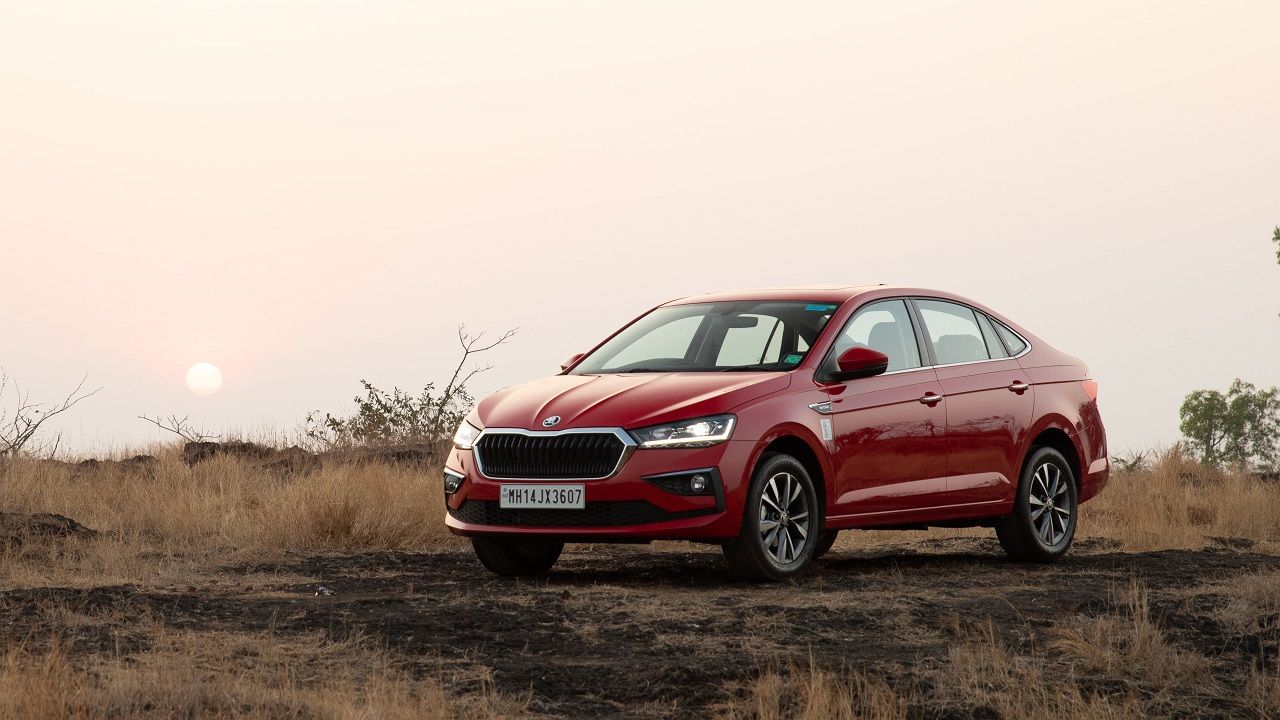 First things first, the Slavia is one handsome-looking sedan. The design is clearly inspired by the fourth-gen Octavia, which means that the Slavia also looks distinctive and European. At the front, you’ll notice Skoda’s signature butterfly grille with chrome treatment around the edges, while a sleek pair of LED headlamps give it a mini-Octavia-like appearance. The bonnet has sharp creases, giving the car a beefy and masculine appeal.

In terms of dimensions, the Slavia has the longest wheelbase (2,651mm) amongst the competition, and it’s also the widest sedan in the segment. The side profile is quite classy and elegant – as it should be on a Skoda. Bold and prominent character lines run across the length of the car, and a slanting coupe-like roof is one of the main design highlights. There’s a subtle use of chrome, and it’s quite tastefully done. The 16-inch wheels do look a size smaller though, but considering our road conditions, 17-inch wheels would have been overkill – both for the life of the alloys and the ride quality.

Another thing that’s clearly evident is the Slavia’s high-ground clearance of nearly 180mm. Not everyone will like it, but then that’s something of a necessary evil while designing a sedan meant for Indian roads. You can’t win ’em all!

At the back, it’s a familiar sight, as the Slavia’s rear end is bold and distinctive. You get a pair of upmarket-looking split LED taillamps with crystalline effect, and there’s big bold Skoda lettering running across the width of the boot lid. That said, the rear design is probably my least favourite bit – from certain angles, it looks a little out-of-place and slab-sided.

Overall, though, if you talk of the design in general, the Slavia looks very premium, attractive, and ‘pricey’ – a scaled-down Octavia, if you will. And this is something that buyers of this segment will definitely appreciate and like about this sedan. 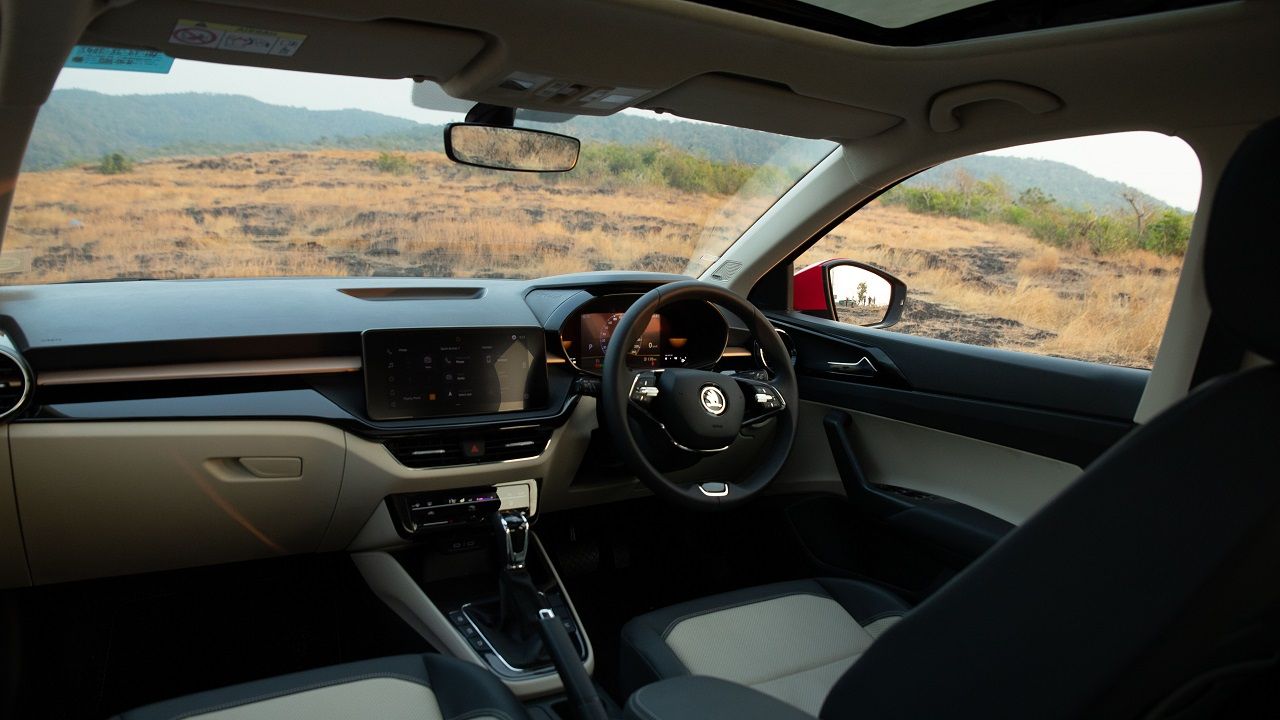 When you step inside the cabin, it’s a familiar affair. The overall design and layout of the dashboard are similar to the Kushaq. The interior has a dual-tone black and beige colour combination, which goes well with the car’s premium positioning. Everything feels well put together – the overall fit-and-finish is great, and the cabin is large, spacious, and practical.

Taking centre stage in this top-end Style variant is the same free-standing 10-inch touchscreen infotainment, with wireless Apple Car Play and Android Auto. As expected, it’s quite intuitive and works beautifully. The screen offers crisp visuals, and the display is super-responsive. The two-spoke leather-wrapped steering wheel is similar to that of the Kushaq. And in terms of features and equipment, the Slavia is as well-equipped as its high-riding sibling. You get ventilated front seats, climate control with a touch panel, two USB Type C ports, a sunroof, a wireless phone charger, and more. That said, the Slavia’s interior gets a couple of crucial updates over the Kushaq. For instance, the top variants of the Slavia come with a virtual cockpit digital driver display, which is identical to the one offered in the VW Taigun GT, and the ac vents are now round. Another big update is the new roof liner, which is of better quality and looks more premium than the Kushaq’s.

On the safety front, the Slavia gets dual airbags, electronic stability control, and traction control system as standard on all variants. The top versions get six airbags.

The front seats are supportive and feel quite comfortable over long drives. However, they don’t come with electric adjustments, and we think that it’s a bit of a miss. At the back, the seats are comfy, and there’s loads of legroom. The slanting roofline does eat into the headroom, and passengers above 5’10" will find the roof too close to their heads. There are rear ac vents as well as two USB Type C ports. The transmission hump is nearly flat, and there’s a headrest for the middle passenger. Three passengers can sit comfortably on short drives.

The Slavia’s party piece is its boot space, which has a massive volume of 521 litres! In comparison, the Kushaq’s cargo space is only 385 litres. So, in terms of space and practicality, the Slavia has a clear advantage over its sibling.  What’s more, in terms of driving experience, as you’ll see, it’s even better! 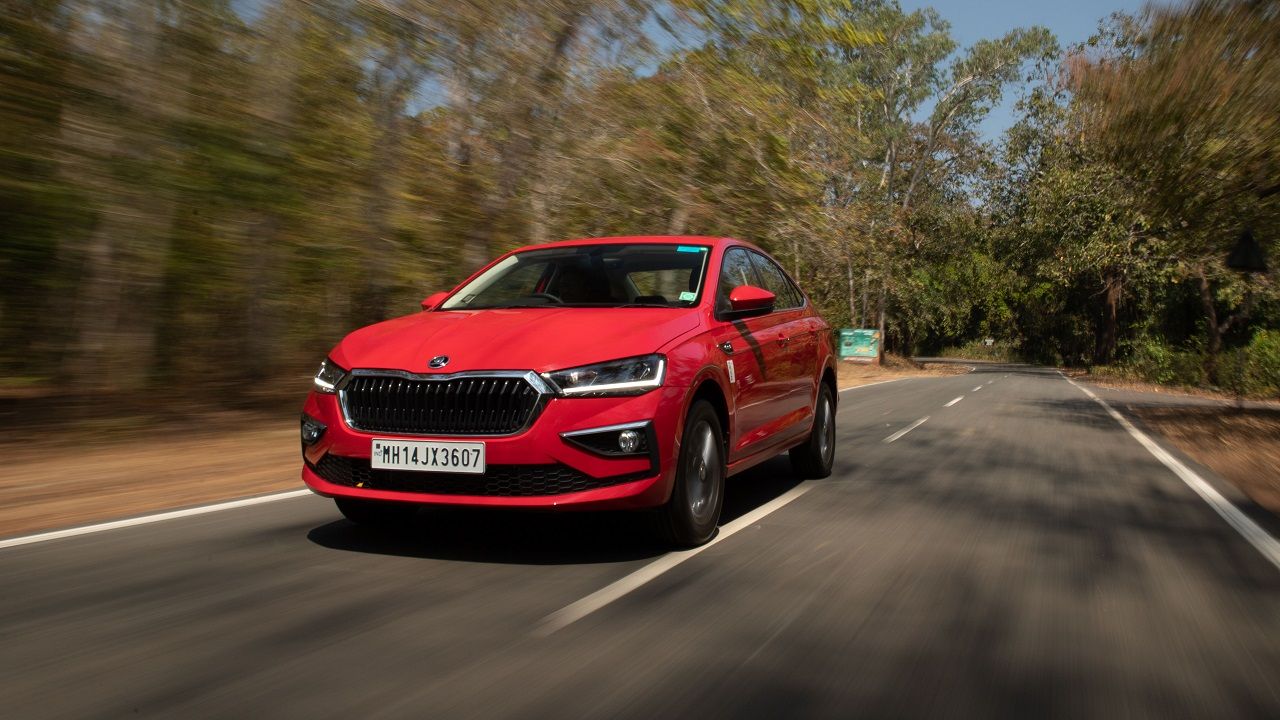 On offer with the Slavia is the same set of TSI turbo petrol powertrains that does duty in the Kushaq and Taigun. A three-cylinder 1.0-litre and a four-cylinder 1.5-litre unit. Gearbox options include a six-speed manual, a 6-speed torque converter automatic (1.0 TSI), and a seven-speed DSG (1.5 TSI). We got to experience the 1.0 TSI AT and 1.5 TSI MT on this occasion. However, in this review, we’ll only focus on the smaller engine, which Skoda says is going to be the mainstay of the Slavia range.

Since it’s a familiar unit, you more or less know what to expect from this 999cc mill. Performance is more than adequate, and despite the fact the Slavia is slightly heavier than the Kushaq, the 1.0-litre version never feels underpowered. There are mild vibrations at idle, but once you start moving, the engine runs smoother. Below 2,000rpm, there’s a hint of turbo lag, but after that, its progress is rather brisk. As we already know, the mid-range (3.500 – 5,500rpm) is where torque delivery is the meatiest with this engine, but the top-end is also quite strong. Since it’s a free-revving unit, it’s also quite engaging to thrash the motor. Despite being a three-pot motor, it never feels strained.

Shifts are seamless and well-calibrated on the six-speed auto, and you also get paddle shifts to take control. In daily driving, the torque converter actually does a better job than the dual-clutch automatic, as it’s doesn’t lurch in lower gears. When driven enthusiastically, it doesn’t quite have the get-up-and-go attitude of the DSG though.

How does it ride and handle? Excellent! The ride quality is pliant – in fact, the Slavia rides like a bigger, more expensive sedan. At low speeds, you’d feel it’s a tad firm over bumpy roads, but the ride is never unsettled or bouncy. The Slavia glides over broken roads with aplomb. The high-profile rubber and a relatively softer suspension setup do undoubtedly help the Slavia, albeit body roll sets in early when you push it hard in corners. But the good thing is that the Slavia feels confident, planted, and under control all the time. It no longer feels nose-heavy or prone to understeer like its predecessor. Its turn-in is quite sharp, and the steering offers a decent feel and feedback. Not saying it's an outright thriller around corners, but then it’s not a lousy handler either. The Slavia is beautifully balanced, and its ride-and-handling sets new benchmarks in the segment for sure. 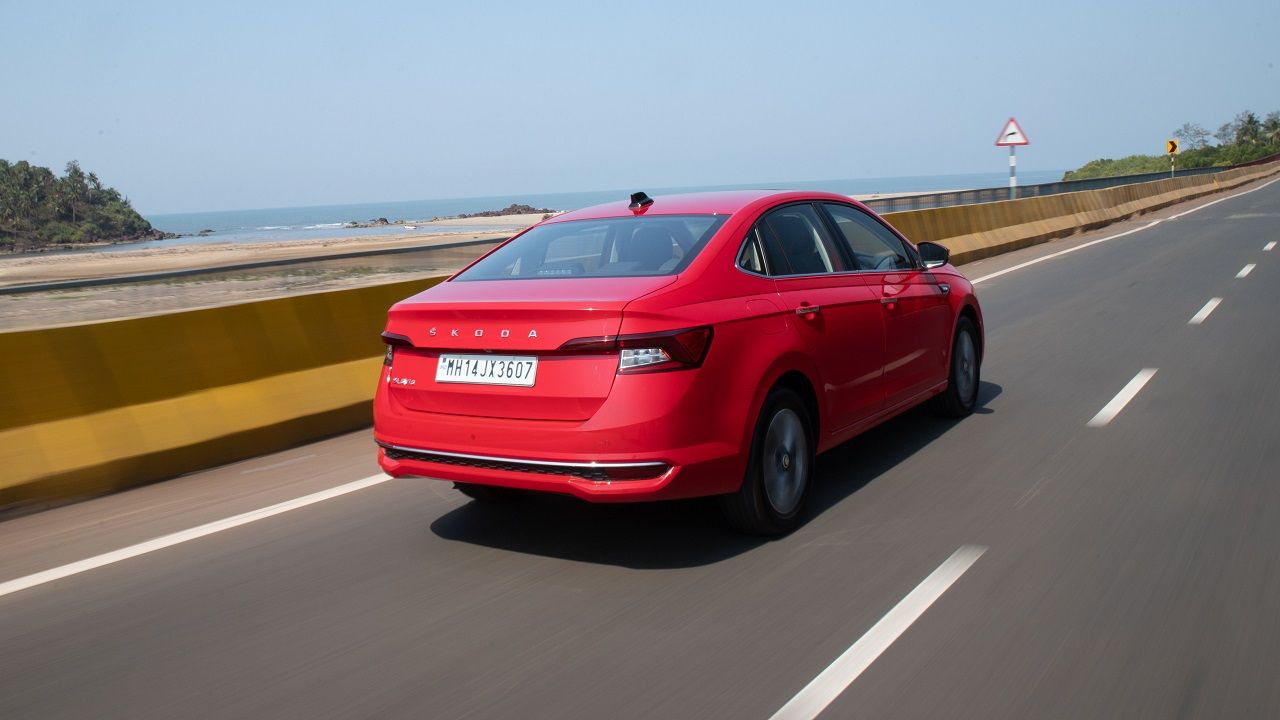 With the Slavia, Skoda has done a tremendous job. And as it claims, there’s still a case for the good old three-box sedan in our market, provided the product ticks all the right boxes. From what I can tell, the Slavia has everything going for it – it looks handsome, the 1.0 TSI motor has enough pull, the driving dynamics are excellent, and it’s a practical, comfortable, and sensible car in every sense of the term. It’s a complete package and one that can definitely rid you of your SUV obsession with its charm and capabilities.

However, if you think the 1.0 TSI version is underwhelming and believe you need more power and excitement in your life, you should be opting for the more powerful Slavia 1.5 TSI. Check out its first drive report here: Skoda Slavia 1.5 TSI MT Review

X-Factor: Quick, handsome, engaging to drive, well-equipped, and practical – the Slavia is a complete sedan in every sense. 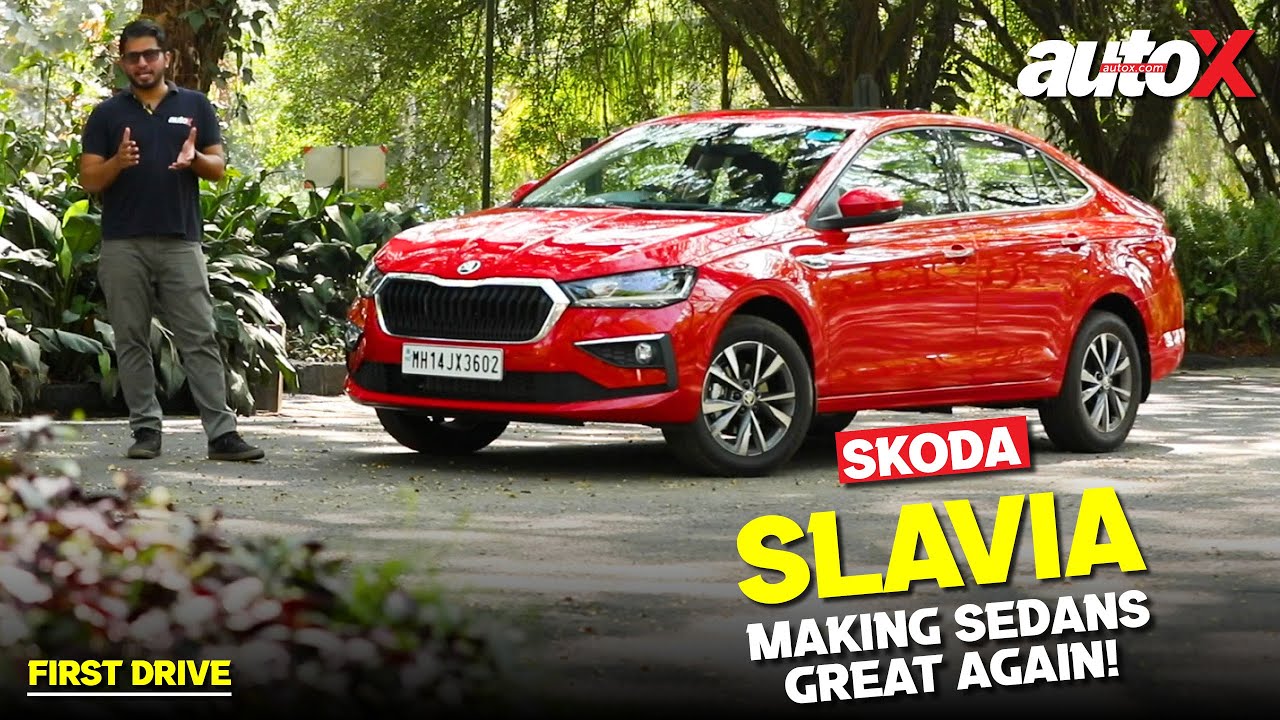