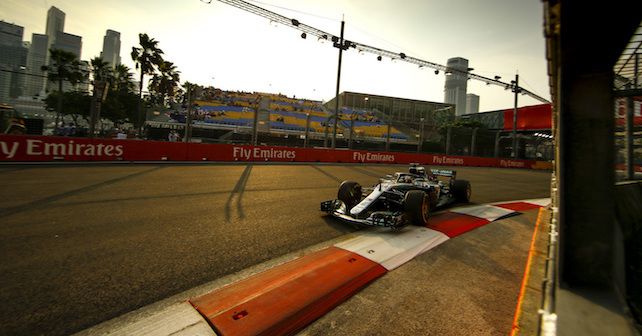 Lewis Hamilton of Mercedes AMG F1 set a stunning time of 1min36.015sec around the 5.063km, 23-turn Marina Bay Street Circuit to claim pole position for the Singapore Grand Prix. Stunning not only because the time set was over three seconds faster than last year's pole time, but because Ferrari and Sebastian Vettel had looked very strong.

Vettel and Ferrari's title chances had taken a big hit in the previous round, the Italian Grand Prix at Monza, where Hamilton and Mercedes beat them against the run of form and have appeared to have the fastest car. However, mistakes by Vettel (including at Monza) have seen Hamilton open up a 30-point advantage to the German as the two race to become only the third F1 driver in history to win five drivers' championships.

Vettel couldn't even manage to make it to the front row of the grid as he had to abandon his effort to beat Hamilton's time and was bested by Max Verstappen of Red Bull-Renault, who qualified second with a time of 1min36.334sec. Vettel was almost 0.3 seconds behind Verstappen.

Just behind Vettel on the second row of the grid was Hamilton's teammate Valtteri Bottas while Vettel's teammate Kimi Raikkonen was fifth fastest. Verstappen's teammate Daniel Ricciardo was sixth fastest.

Verstappen's presence on the front row of the grid could lead to fireworks at the start of the race tommorow on account of the 20-year-old Dutchman's aggressive driving style as well as potentially desperate attempt by Vettel to try and hit the front of the field.