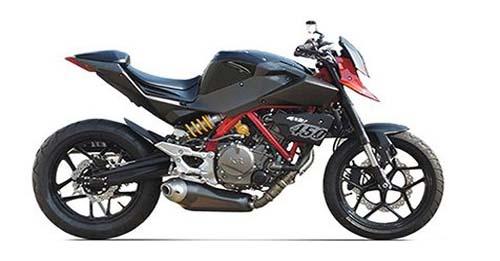 Hyosung GD450 is not launched in India yet. Information on this page is tentative.

Hyosung took the wraps off the GD450 at the 2015 EICMA in Italy. The GD450 is a middle-weight naked streetfighter that will be placed in between the GD250 and GT650N. As for the prototype, it looks snazzy and aggressive in its stride.

The GD450 will be powered by a 450cc single-cylinder engine capable of churning out 49bhp of power 48Nm of maximum torque. The engine will be paired to a six-speed manual unit.

There is no word on the official launch date of the Hyosung GD450 in India. We expect them to unveil the production-spec model in the next couple of months for a slated launch by year-end. Hyosung is likely to price the GD450 in the vicinity of Rs.2 lakh. At the said price, the GD450 will compete against the KTM 250 Duke and Royal Enfield Himalayan.