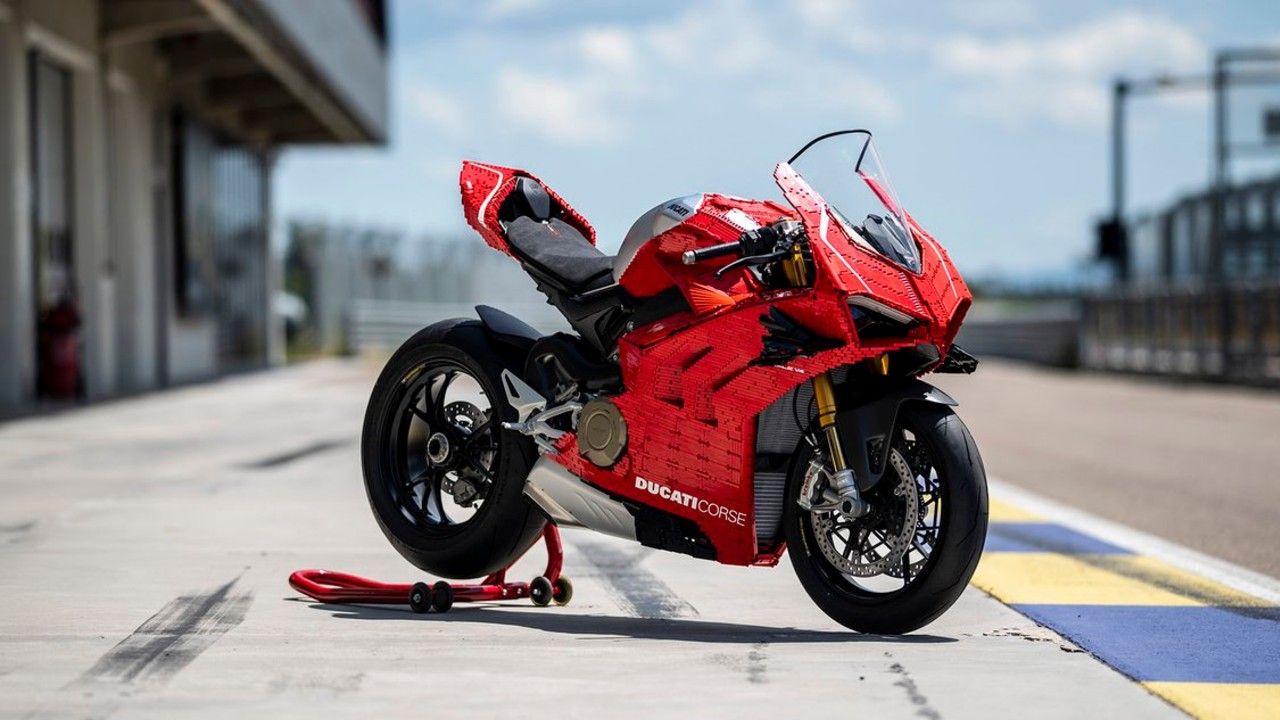 Built using 15,000 Lego Technic bricks, this Ducati Panigale V4 R replica weighs 180kg – just 8kg more than the original. Unlike most other Lego models, this one-of-a-kind unit, has a fully functional engine underneath

Lego has gained the reputation of offering model kits for some of the most iconic vehicles out there. Just a few months back in April, Lego launched the Technic Ducati Panigale V4 R set. While that one is for mere mortals to build and be happy, there are some who need a bigger challenge. How about a 1:1 size fully functional replica? Lego artist Riccardo Zangelmi has just built the full body work of the Ducati Panigale V4 R out of Lego bricks. He unscrewed the existing fairing and other body work from the motorcycle and replaced the panels with Legos. This Lego Panigale V4 R has a 998cc V4 unit hiding behind the body work – one that can do more than 300km/h. It took more than 400 man-hours and 15,000+ Lego pieces to build the 1:1 Lego Panigale V4 R. With Lego bodywork, the Panigale V4 R tips the scale at 180kg – 8kg more than the actual Ducati.

Speaking about his creation, Zangelmi said, “Taking part in this project of LEGO Italia and Ducati was the most exciting professional challenge I’d ever faced. It pushed me well beyond any limit and I succeeded by crossing the finishing line as part of a team. I approached the project as an official pilot of the Borgo Panigale Company, giving it my all on the track, looking for and overcoming new challenges. I was the first to look at the two motorbikes side by side, and I am happy to have captured the DNA that characterizes both LEGO Technic and Ducati, recreating with bricks the motorbike that is symbolic of Italian excellence”.

The Lego Ducati Panigale V4 R 1:1 replica was unveiled by MotoGP rider Andrea Dovizioso, together with Paolo Lazzarin, General Manager of LEGO Italia and Claudio Domenicali, Ducati CEO. This isn’t the first time Lego has built a 1:1 replica of a popular vehicle. Last year, the Danish toy maker brought together 1 million Lego elements, 2,300 motors and 4,000 gear wheels to build a life-size replica 1:1 of the Bugatti Chiron. What’s more, they even managed to fit in a 5bhp/92Nm electric powertrain in it.