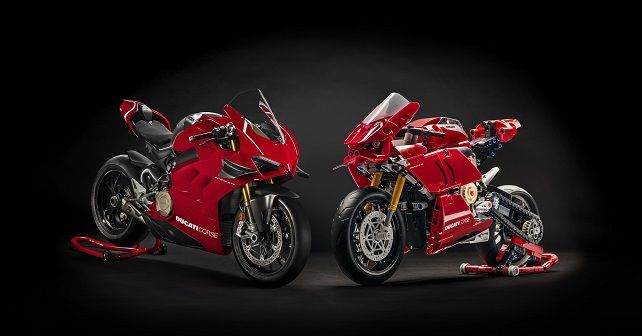 The Ducati Panigale V4 R is one of the finest motorcycles in the world at the moment. Not to mention, it’s a very special and rare motorcycle and comes at an eye-watering price tag – when it was launched in India in 2019, it was priced at a whopping Rs 51.87 lakh (ex-showroom)! With that kind of money, the Panigale V4 R is obviously isn’t for everyone. But, just in case you can’t stop obsessing over the V4 R and want one badly, Lego has revealed their version of the Panigale V4 R, which is, surprisingly, quite affordable at just 60 euros (Rs 5,000)! Sure, it’s a bit too small and doesn't pack the real bike's 217bhp V4 engine, but then it’s almost as cool as the original bike.

The latest product from Lego is the Technic Ducati Panigale V4 R, which is a spectacular brick reconstruction of the original motorcycle. The Technic V4 R is the first Ducati motorcycle by Lego, and that makes it all the more special. The motorcycle measures 32cm in length, 16cm in height and 8cm in width. As you would expect from a Lego product, the attention to detail is phenomenal and every panel on the Technic V4 has been carefully crafted to match the features of the original bike. From the V4 engine to its bodywork, suspension to brake discs, everything on it has ‘faithful’ details to the real version. The bike also comes with a two-speed working gearbox.

The Technic Ducati Panigale V4 R is made up of 646 pieces and it’ll be available in Ducati dealership and Lego outlets as well as on online stores of both the brands from June 1, 2020. Of course, you don’t have to fill in lengthy forms or need a driving license to get this version of the Panigale V4 R home, however, do make sure that you are over 10 years old – physically that is.