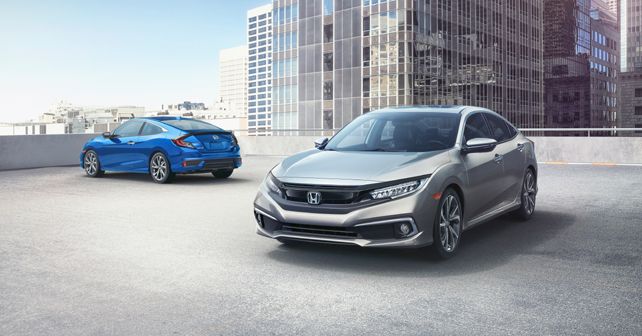 The refreshed 2019 Honda Civic coupe and sedan have been unveiled in the United States, and the sedan is likely to reach India by 2019.

A few months ago, during the 2018 Auto Expo, Honda had announced its plan of launching three new cars in India in FY19. Out of the three, the new second-gen Amaze has already hit the streets, the new CR-V is slated for an October 2018 launch and the third one is the new Honda Civic, the 10th generation facelift to be precise. The refreshed 2019 Honda Civic has been unveiled in the United States and India too. Indian is bound to get the same model later in 2019.

The new car gets a few stylistic upgrades. At the front, there's now a piano black-finish upper-fascia ‘wing’ instead of the chrome bar that was seen on the pre-facelift Civic at the Auto Expo. The front bumper has also been reworked, which is more angular now with chrome accents, and at the rear, a new chrome strip garnishes the bumper. Completing the list of cosmetic updates is a new set of alloy wheels.

Talking about the interior, the refreshed Civic gets Honda's updated seven-inch touchscreen infotainment system bundled with Android Auto and Apple CarPlay connectivity. No other changes in the interior are expected on the India-bound model. However, in terms of safety, the new Civic will get Honda Sensing as standard across all variants, which includes a host of crash-preventive features such as collision warning and mitigation system combined with autonomous braking, lane departure warning and adaptive cruise control, to name a few.

For the Indian-spec model, Honda is expected to introduce the Civic with two engine choices7 –  A 1.8-litre, 140bhp petrol motor and a 1.6-litre diesel engine which develops 120bhp and produces 300Nm of torque. The diesel engine on the Civic will be the same as that on the new CR-V, but the state of tune isn't confirmed yet. As for the gearbox, the diesel might be paired with a nine-speed automatic, keeping in mind the growing demand for automatics in India.

As per Honda's current plans, expect the 2019 Civic to reach the Indian shores by the first half of 2019.