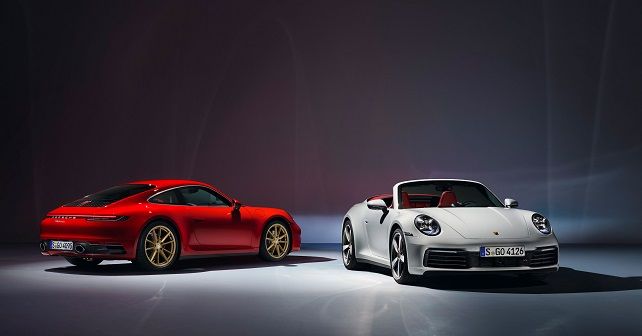 Nearly a year after the launch of the eighth-gen 992 911 Carrera S, Porsche has now launched the 'base' Carrera version of the sports car.

If you’ve been saving to buy a 911, you’re in for good news – Porsche has made the road to own the latest-gen model of its iconic sports car a bit easy for you. They’ve launched a new ‘base’ version of the new 911 that will sit below the Carrera S. Naturally, it’s called the Carrera – just like the old days – and carries a lower price-tag.

The 911 Carrera features the same 3.8-litre six-cylinder turbo engine as the Carrera S, but in this application, it’s been detuned and produces 380bhp and 450Nm, as opposed to 444bhp and 530Nm in the S. Porsche says that's because of the smaller turbo compressors in the Carrera. Power transmission duties are carried out by an 8-speed PDK dual-clutch automatic, which sends the drive to rear wheels. A manual version is expected later on.

While it may seem to have a little less power compared to the S, the new Carrera is more powerful (+15bhp) than its predecessor. Performance wise, it’s pretty quick for a ‘base’ model. 0 – 100km/h is dismissed in 4.2 seconds (4.0 seconds with Sport Chrono Pack), and its top speed is 293km/h.

In terms of equipment, the Carrera gets smaller 19-inch alloy wheels at the front and 20-inch alloys on the rear axle. Braking duties are carried out by smaller 330mm brake discs with four-piston callipers. Apart from this, the Carrera gets individual tailpipe covers to make it different from the S version. Inside, standard equipment is identical to the S though, which means it gets the same 10.9-inch touchscreen display and Porsche Wet Mode for safe wet weather driving.

The base 911 Carrera is available in both coupe and cabriolet forms. Given the fact that the Porsche 911 Carrera S is already on sale in India, it’s quite likely that we’ll get the more affordable version here soon. In global markets, the new Carrera costs around Rs 10 lakh less than the S. Expect it to have a similar price difference in India – the Carrera S is priced at Rs 1.82 crore (ex-showroom).