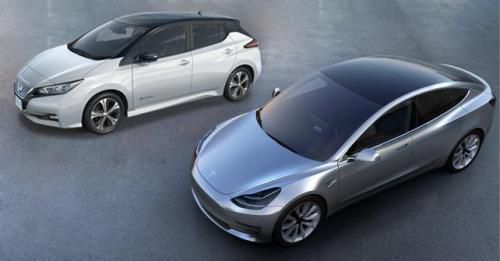 Nissan’s new Leaf EV is now more competent than ever before. And it's closer to the trending Tesla Model 3 more than ever before. So here is a look at how similar these electric cars are to each other, despite the fact that both these cars are very different in nature.

Nissan Motor has revealed the brand new Nissan Leaf, one the best-selling electric vehicles on the planet. However, the cult following of Tesla around the world begs the question how does this modern Japanese EV fares against Elon Musk’s idea of affordable electric mobility.

As the new Nissan Leaf will be sold mostly in America, Canada, and Europe, buyers are likely to compare it with the Tesla Model 3. What both cars have in common, apart from being fully electric, are actually quite a lot. At the moment, Nissan has only revealed details the most basic powertrain option that will be available, which is why it makes the most sense to see how it stacks up against the base model of the Model 3.

Overall, both cars are similarly designed in terms of layout of the drivetrain and power storage. They both come equipped with a lot of technology, autonomous driving, and really clever gadgets. However, when you take a closer look, they both are quite different as well.

The Tesla Model 3 is a much larger vehicle compared to the Nissan Leaf. The Model 3 is longer, wider, and it has a longer wheel base and is designed to resemble a fastback. With the Leaf, Nissan has kept with their theme of a small electric car in the shape of a hatchback, and is, therefore, taller than the Tesla.

When you look at all the technical stuff, you will notice that the Tesla gets a bigger battery pack, more power, and more torque. It even has a much higher top speed compared to the Nissan. When it comes to fast charging, the Model 3’s charging capabilities is also quicker. However, when it comes to drivable range, Nissan claims that the new Leaf can go for 28kms more than the Tesla on a full charge. This probably down to the fact that Nissan has designed the Leaf more as a city car for congested urban areas, and Tesla’s target audience are Americans who want and need a more powerful vehicle to drive around not only in the city but also on the highways.

Having said all of that, you would think that the Tesla has outshone the Leaf and sent to the middle of yesterday. Though Nissan hasn’t officially announced the price, I failed to mention that the Nissan Leaf will not cost nearly as much as the Tesla. How much less is the only thing that remains to be seen.