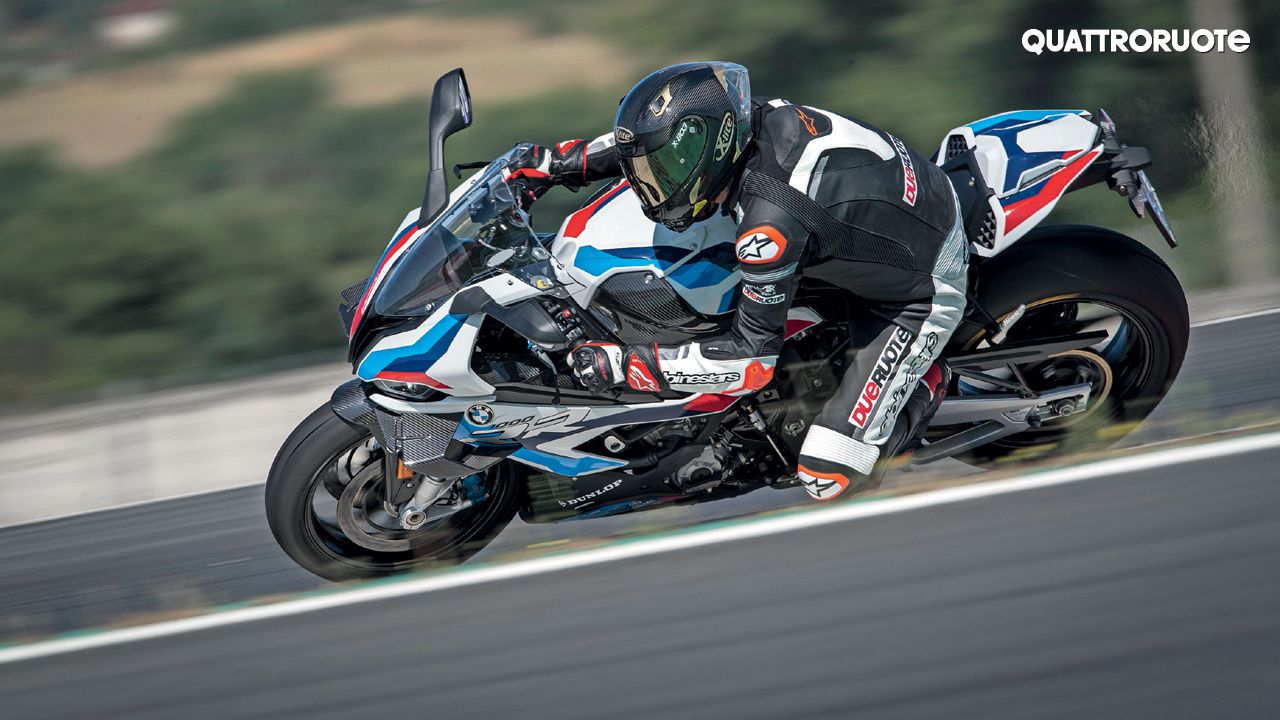 The letter that represents the most powerful and sporty BMW cars has officially made its debut on a motorcycle that has everything in excess – performance, equipment, refinement, and, yes, also price.

The S 1000 RR – BMW’s first true superbike – arrived rather unexpectedly back in 2008. Even more unexpected, however, was the way in which it immediately placed itself at the top of the category, causing its Italian and Japanese competitors to panic, thanks to an extraordinary engine, a perfect chassis, and cutting-edge electronics. Lethal on the track and usable on the road, the S 1000 RR opened up a new line of adrenaline-pumping motorcycles in Munich – from the naked S 1000 R to the crossover S 1000 XR.

But there was a gap in the line-up – something was missing, something extraordinary, something that could not only set enthusiasts’ hearts racing on the track but also face the most prestigious hyper machines without any reverential fear.

So, to fill this gap, BMW decided not only to draw heavily on its racing experience but also to use, for the very first time, the letter ‘M’ on motorcycles. Now, it’s no ordinary letter, for it has always been synonymous with the highest-performance products in BMW’s line-up of cars.

And it was only a matter of time before BMW Motorrad got access to the M-badge though. But for that, it had to come up with a motorcycle that could justify the M-badge. Unsurprisingly, the skunkworks of the Motorrad division rolled out the BMW M 1000 RR – the M-version of the S 1000 RR. And good lord, what an M product it is!

On one hot morning towards the end of July, we found ourselves in Vallelunga (Italy), staring anxiously at a spectacular row of the M 1000 RR ready to test our skills and our level of training. Yes, you read it right, for you can’t be anything but humble against the extraordinary might of these Hypersport monsters!

The M 1000 is indeed extraordinary – it would be a gross mistake to think of it as an ordinary S 1000 RR with special features. The innovations here are many and, often, so radical that they make it profoundly different from its standard sibling.

Let’s start with the engine, which focuses primarily on weight reduction. So, what do we have here? Longer and lighter titanium connecting rods from Pankl, titanium valves, Mahle forged pistons, thinner finger rocker arms, and optimised combustion chambers. The compression ratio has increased, and to make the Bavarian inline-four inhale and exhale better, there are CNC machined ducts and an Akrapovič titanium exhaust system. And yes, it comes with BMW’s ShiftCam tech with variable valve timing.

The M’s engine develops slightly more power than the standard version – 5bhp to be precise, making it a total of 209bhp – but the torque is unchanged at 113Nm. Its torque delivery is more aggressive though, especially between 6,000 and 9,000rpm – in this rev band, the engine offers a more vigorous thrust. The gear ratios are also shorter, which means that a slight flick of your wrist is enough to blur the world around you.

The M 1000 RR continues with the ‘Flex Frame’ of the S 1000 RR, with the engine as the stressed member. But that’s not to say that it hasn’t been modified at all. The rake and trail have increased to 23.6° and 99.8mm, respectively, from 23.1° and 93.9mm of the S 1000 RR. The swingarm, which is now longer and lighter, offers the possibility of adjustment up to the height of the pivot point and works with a fully adjustable monoshock. The front features a 45mm Marzocchi fork. The M 1000 RR doesn’t feature a semi-active suspension system.

The braking system has been produced by Nissin to BMW’s specifications and sports the ‘M’ logo. There’s also a wonderful pair of carbon rims that embellish the overall appearance of the motorcycle. The latter also helps bring down the weight of the M 1000 RR by 5kgs to 192kgs in running order. 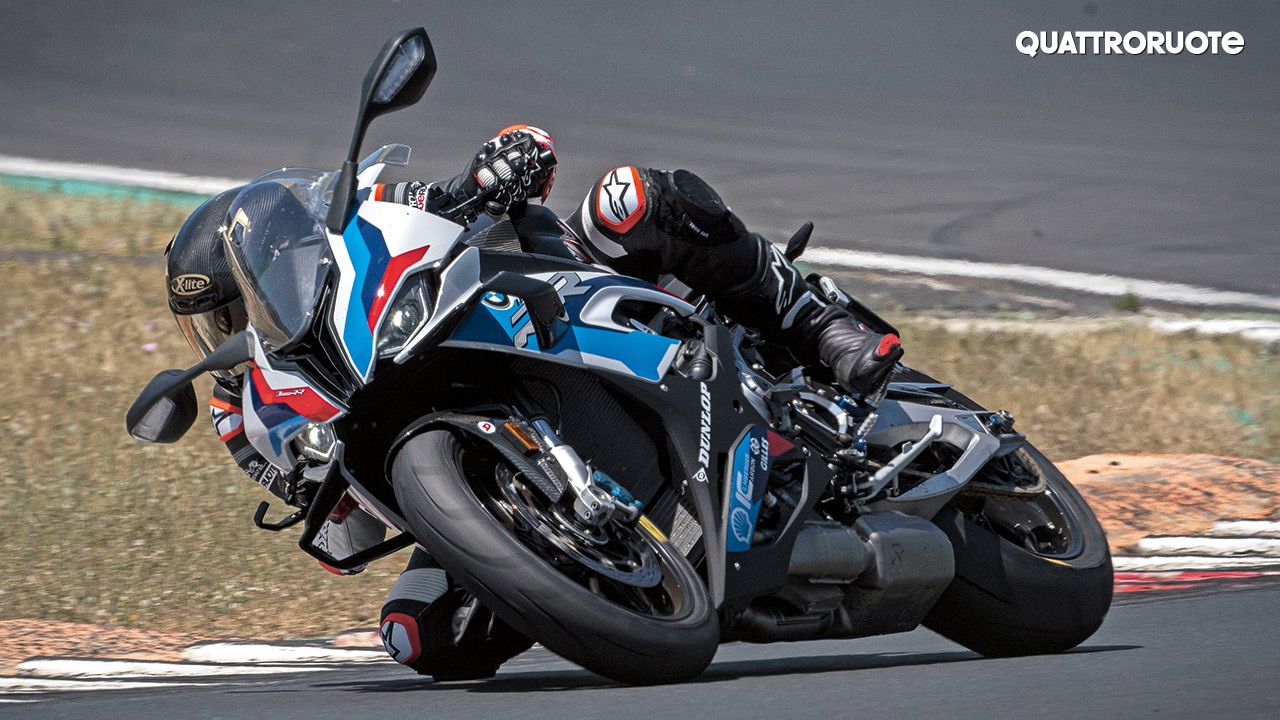 The M 1000 RR is very similar to the S 1000 RR, but it does stand out with its fins, anodised parts, and colour schemes – all of which make it look more aggressive.

Aesthetically speaking, it’s not that different from the S 1000 RR, except for the fact that it has a more pronounced and protective fairing and the now indispensable front ‘wings’, capable of producing over 16kgs of downforce at 300km/h. The result is as impactful as can be expected, thanks also to the optional aesthetic M package (our test bike had one), which adds many details in carbon and machined aluminium.

After riding the S 1000 RR for a bit for reference and to warm up, it was time to go speed dating with the M 1000 RR just for a couple of rounds, in which we were to understand if the new German beauty is as effective as it is fascinating. Fortunately, we don’t usually go wrong in trusting our first impressions.

At once we recognised its similarities with the S, but, at the same time, it was clear that everything here works in a more harmonious way like a refined and well-rehearsed orchestra religiously following the cues of the conductor.

All the work that has gone into improving the engine produces the desired result – it goes up the rev band with vengeance and offers a very precise throttle response. It never exhibits, not even for a moment, even the slightest hint of hesitation. 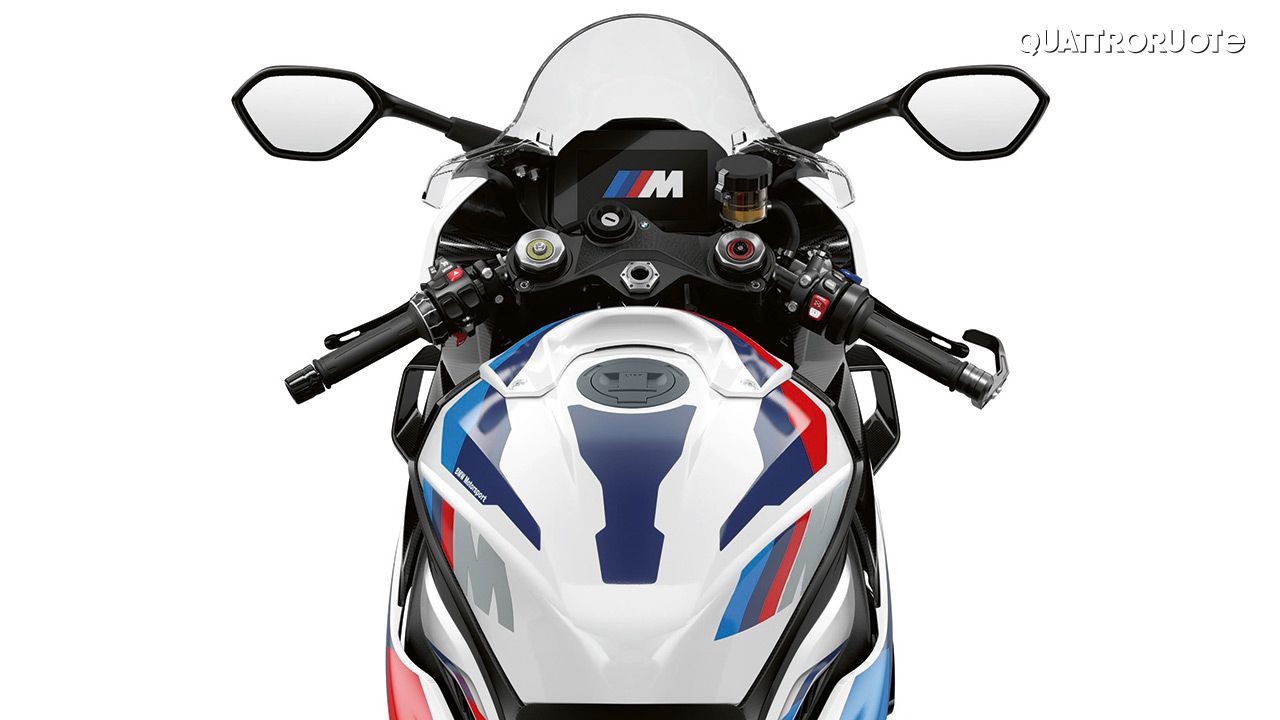 In addition to the engine and component upgrades, the M 1000 RR has slightly different geometry – an effect of the fork plates, with dedicated offset, and less inclined headstock, which results in a longer trail (now 99.8mm). The 12mm longer swingarm also increases the wheelbase to 1,457mm.

Before trying to discover the point of entry of the limiter, we decided to enjoy its brilliant mid-range pull up to 13,000rpm. The M makes its way on the tarmac with ease and offers its stratospheric performance to the rider in a manner that’s gentle and unabrupt. Riding it without worrying about the stopwatch is an experience worth having if you are someone who truly enjoys riding. It is very fast around bends and likes to maintain the line with a sense of obstinate determination.

The mechanical suspension transfers everything that happens between the wheels to the rider in a precise and rigorous manner, without filtering anything. During the test, it was only at the exit of the second curve of the track, on the fast left, that the BMW underwent a slight but prolonged swaying partly because we were hanging on to the handlebars and partly because of a very free rear setting.

In the second lap, after gaining a little confidence, we were able to witness the M 1000 RR’s racier side, which was marked by an explosive predisposition to reach the top of the rev counter and accompanied by the wild roar of the Akra exhaust.

It was then that we realised the brilliance of the electronics package, with 6-axis inertial platform and every possible riding aid system. There are seven riding modes, three of which (Race Pro) are fully customisable. The traction control intervention (with 14 levels!), throttle and engine brake response, anti-wheelie, and ABS intervention level can all be adjusted.

As mentioned earlier, there are three ‘Race Pro’ modes, which BMW test riders had already set. The first one was more controlled, and the last one was free from any kind of intervention. However, it was the middle one that satisfied us the most, for it effectively minimises the intervention of electronic controls in the M 1000 RR. However, when they do intervene, they do so imperceptibly – in fact, if it were not for the continuous switching on of the traction light on the Race screen of the 6.5-inch TFT panel, you wouldn’t even know about it.

Now, it was only towards the end of the test that we further restricted the intervention of the traction control to enjoy the exhilaration that the Dunlop D 213 GP Pro tyres are capable of offering. It marks a perfect balance between resisting the bursts of torque from the four-cylinder screamer and launching an outright assault.

The use of the carbon rims significantly reduces inertia during direction changes. In fact, this German beast is nothing short of a missile – it flies from one curve to another. The braking is powerful and always up to the mark – it never exhibits any signs of stress. The new BMW M 1000 RR, then, is a true SBK replica, which is always ready to fight with the most exotic versions of its competitors. 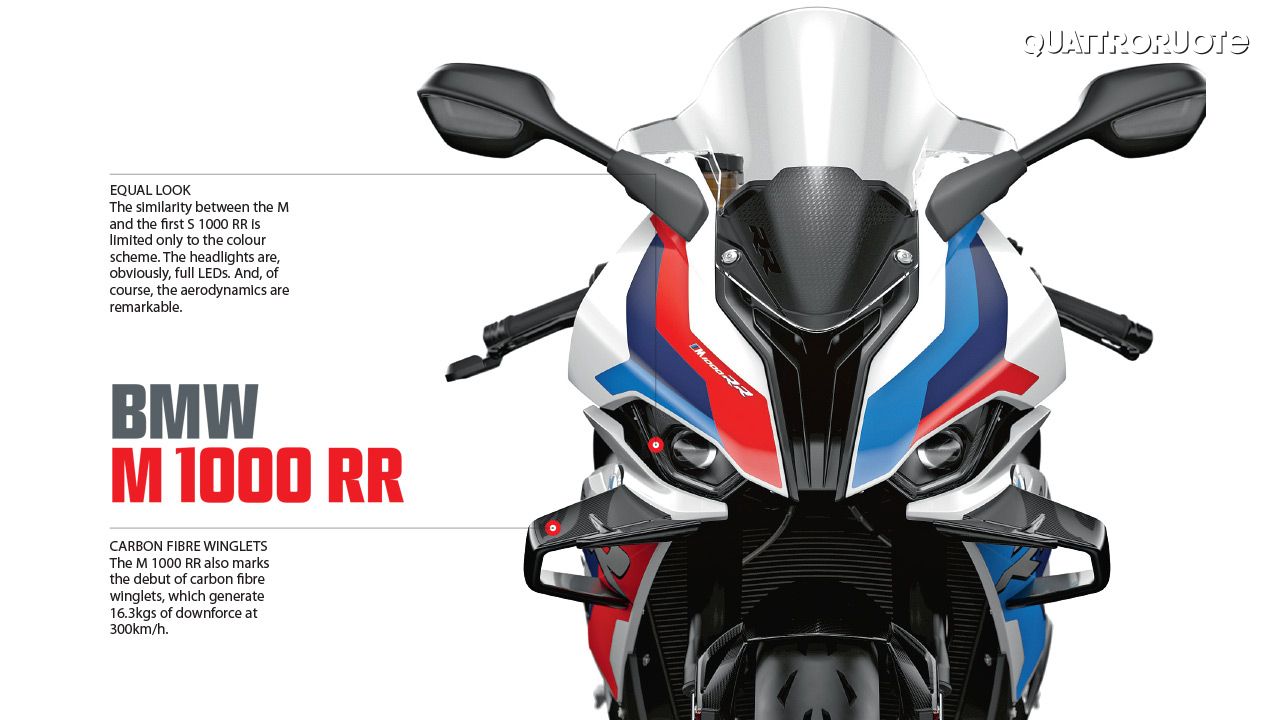 An exclusive bike in every sense of the word, it demands ₹42 lakh in India, to which you can add the M Competition package, which includes special parts in carbon and aluminium at a premium of ₹3 lakh. Now, it may seem a bit much, but ride the bike with the package, and you won’t be able to help yourself from being completely enthralled and mesmerised by it.

The M 1000 RR retains everything good in the S 1000 RR, on which it is based – the engine, which, even if it no longer has the power advantage that made it famous when it first appeared, is still amongst the top of the class; the electronics, which instil great confidence in the rider because of the way it manages all the power and its general usability. In fact, the bike’s general usability is such that despite its positioning as an authentic race-replica, it is, perhaps, the most enjoyable hyper bike that can also be used every day, even though it lacks the versatility of a sport-tourer or a crossover. 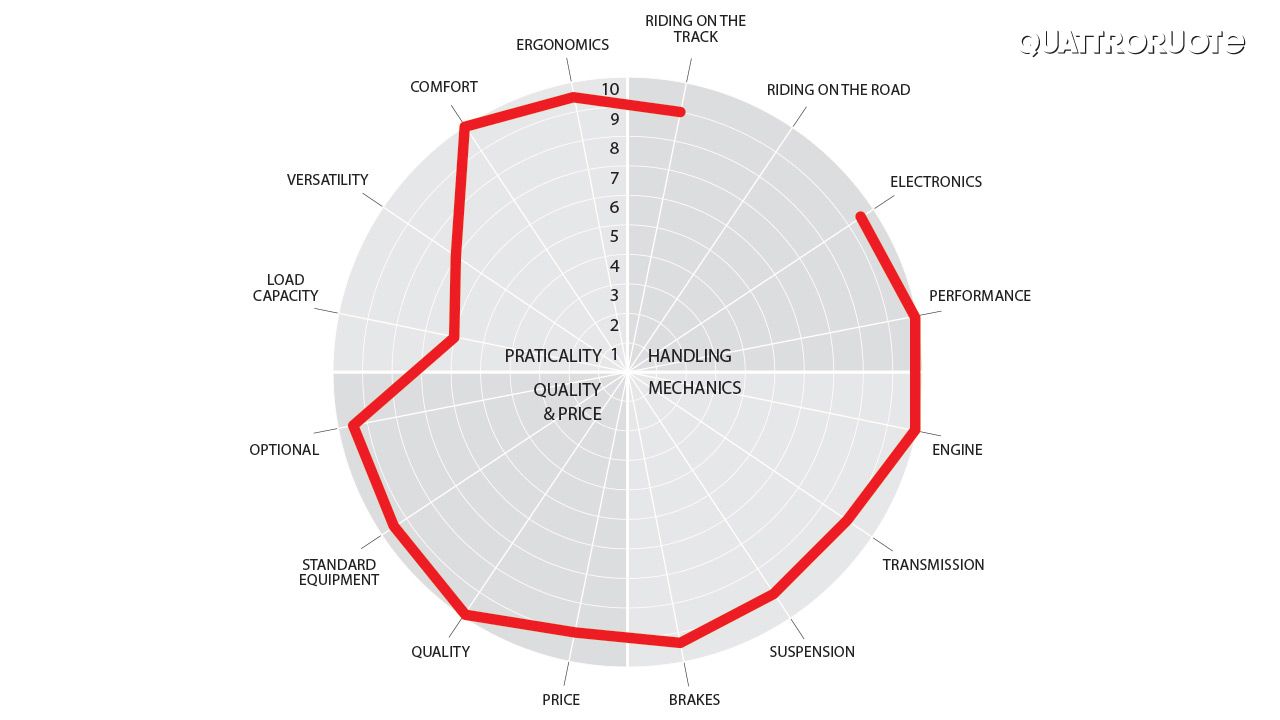 Essentially an ‘M’, it features top equipment, brilliant build quality, and, unsurprisingly, an exorbitant price tag. The radar above, obviously, favours the right side, where it is just a bit short of being perfect. However, overall, the M 1000 RR is on the same level of brilliance as the latest road superbikes, like the Ducati Panigale V4 S, Aprilia RSV4 Factory, and Honda CBR1000RR – something that’s hardly surprising, given the level of sophistication that the category now enjoys. Of course, it is increasingly difficult to find places where you can exploit this performance (even on the track), but people buy these motorbikes for their undeniable charm. And this means that choosing one over the other is simply a matter of taste. 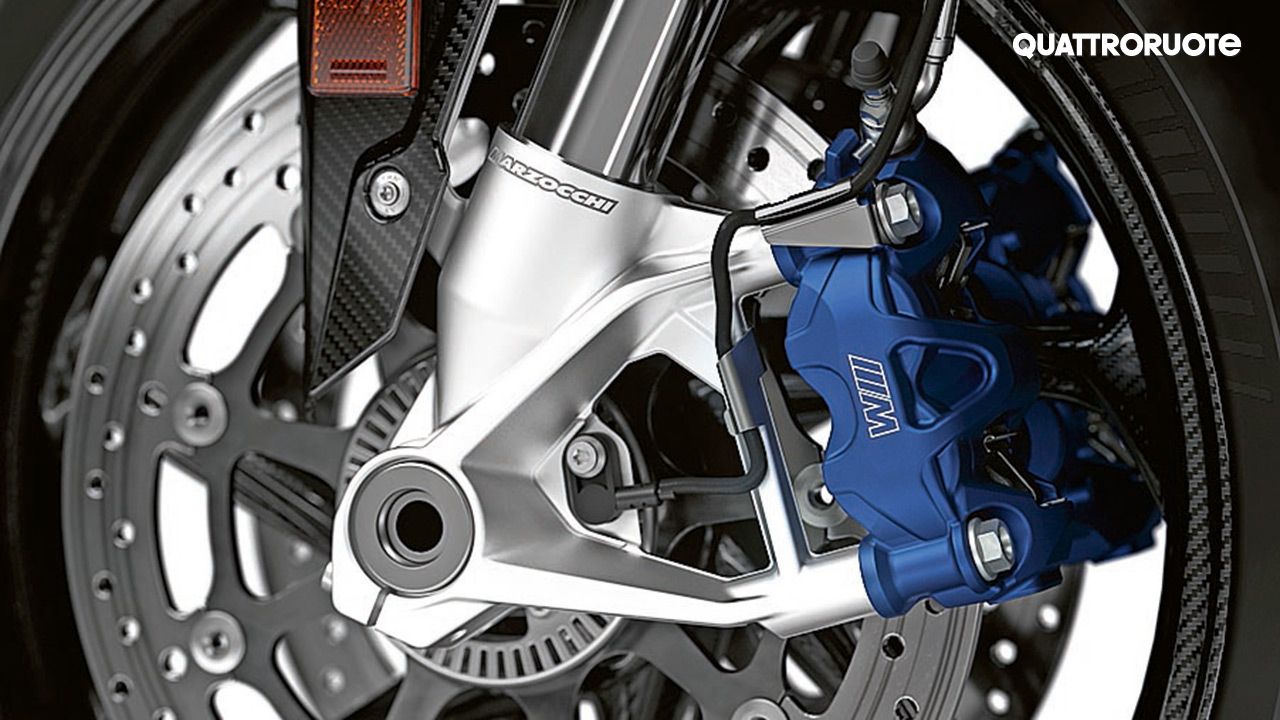 Above: Like BMW’s sportiest cars, M-branded callipers are marked by the letter ‘M’ and painted, in this case, in blue. They are manufactured by Nissin to BMW’s specifications and are stiffer and lighter, have pistons coated in zinc-nickel, and come with a certain grade hydraulic fluid. Below: The carbon wheels weigh 1.7kgs less than the aluminium wheels of the S 1000 RR, and the black and blue CNC footpegs are optional. 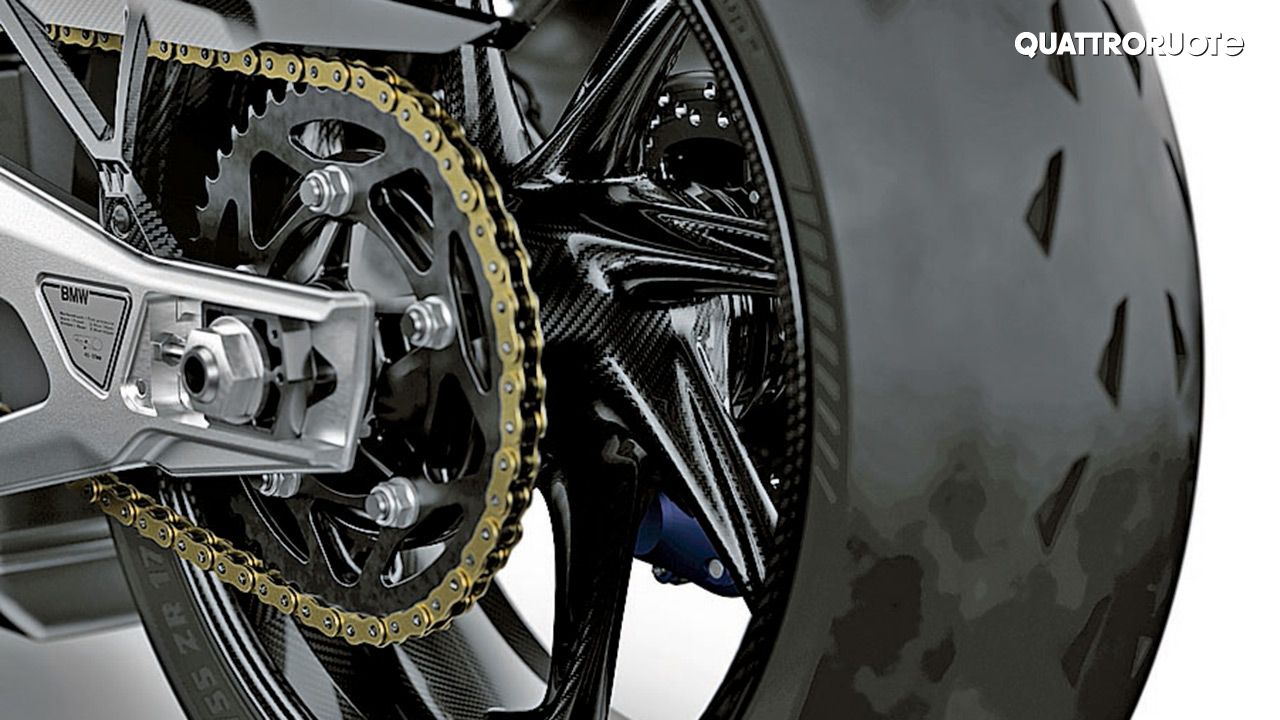 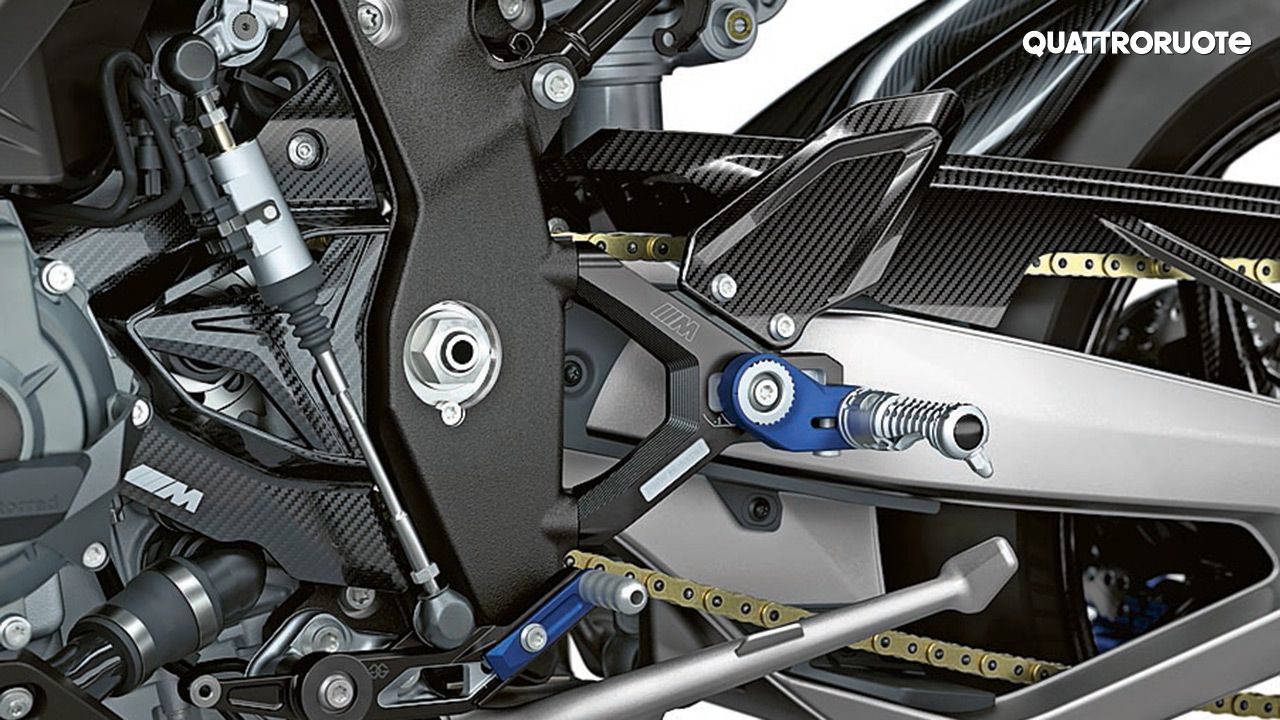 Electronic Controls (manageable by the rider)