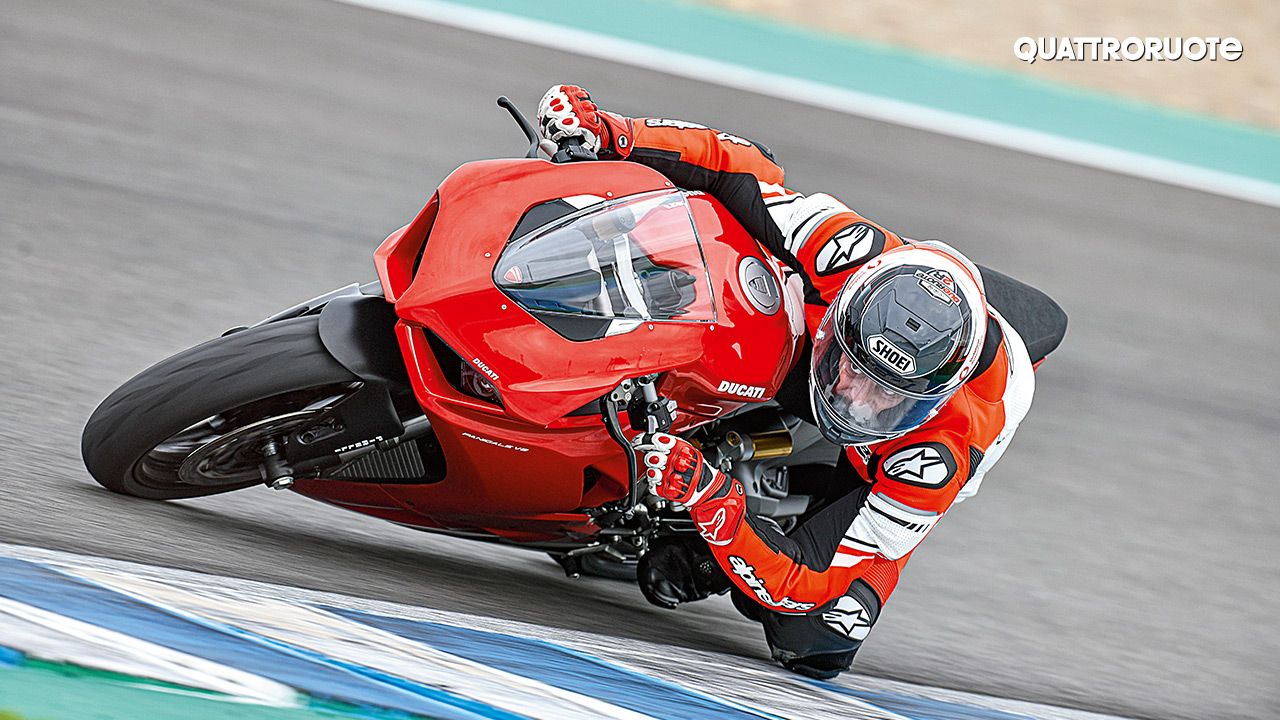 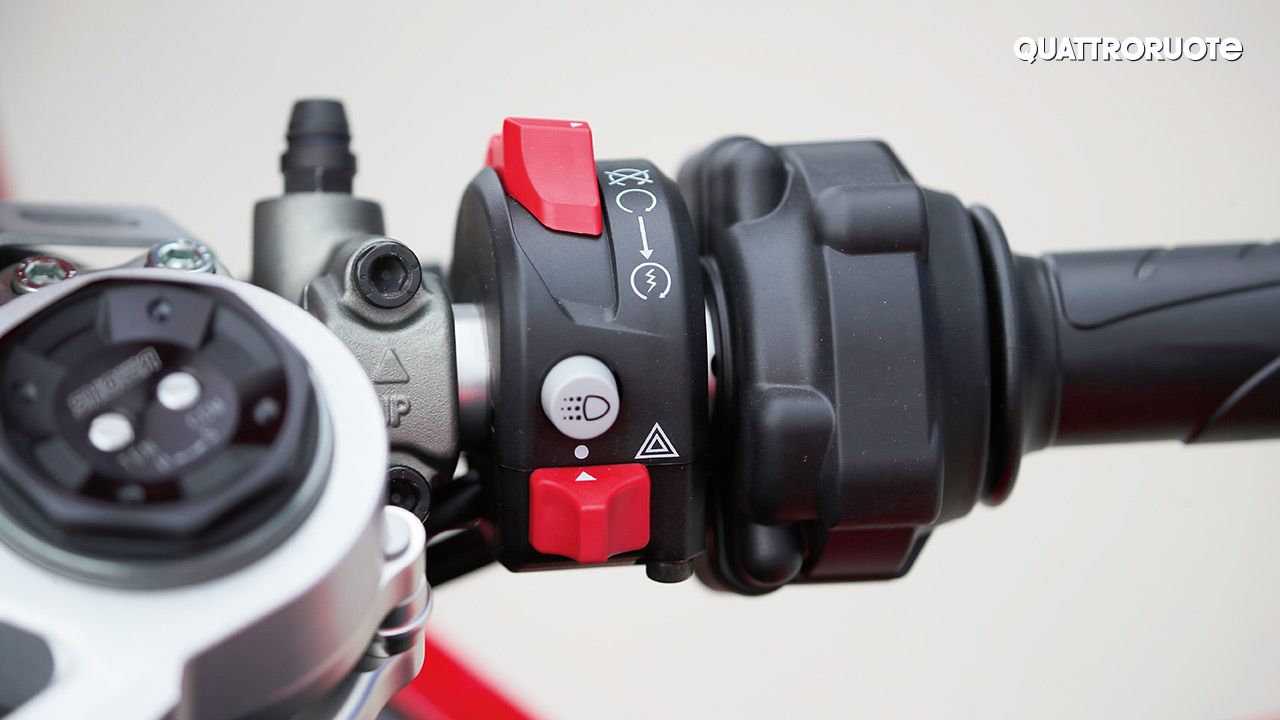 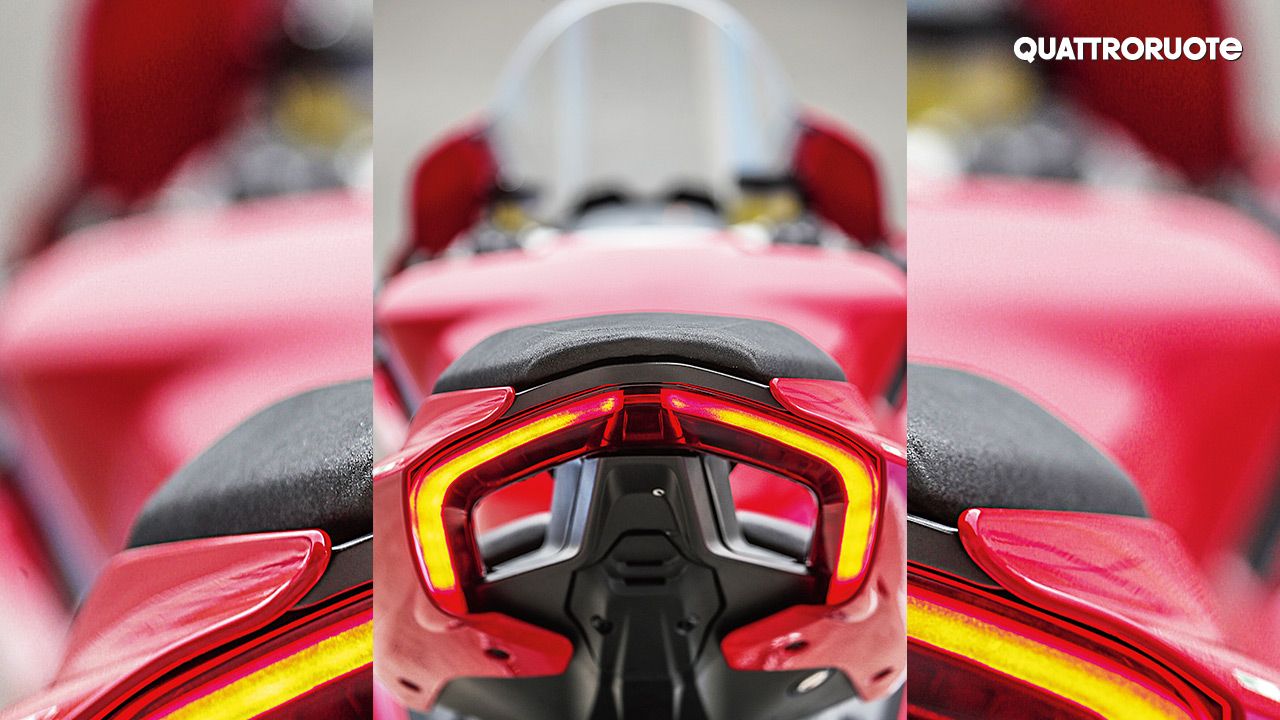 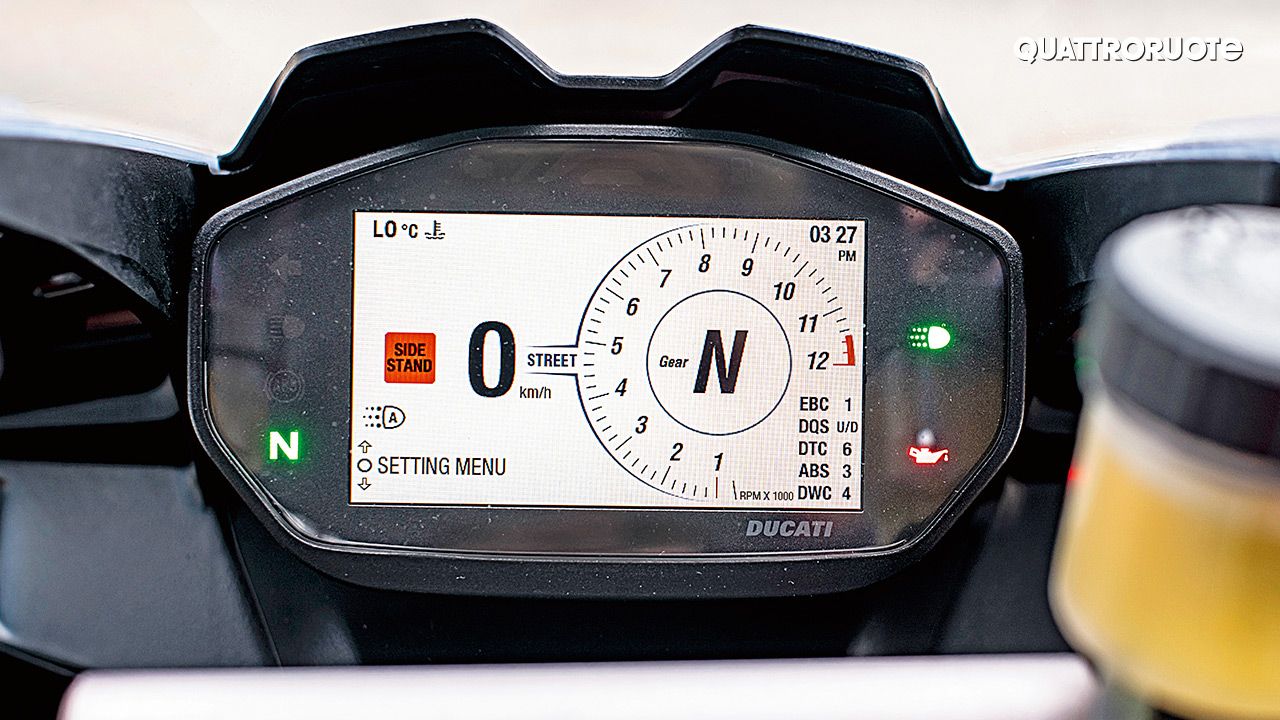 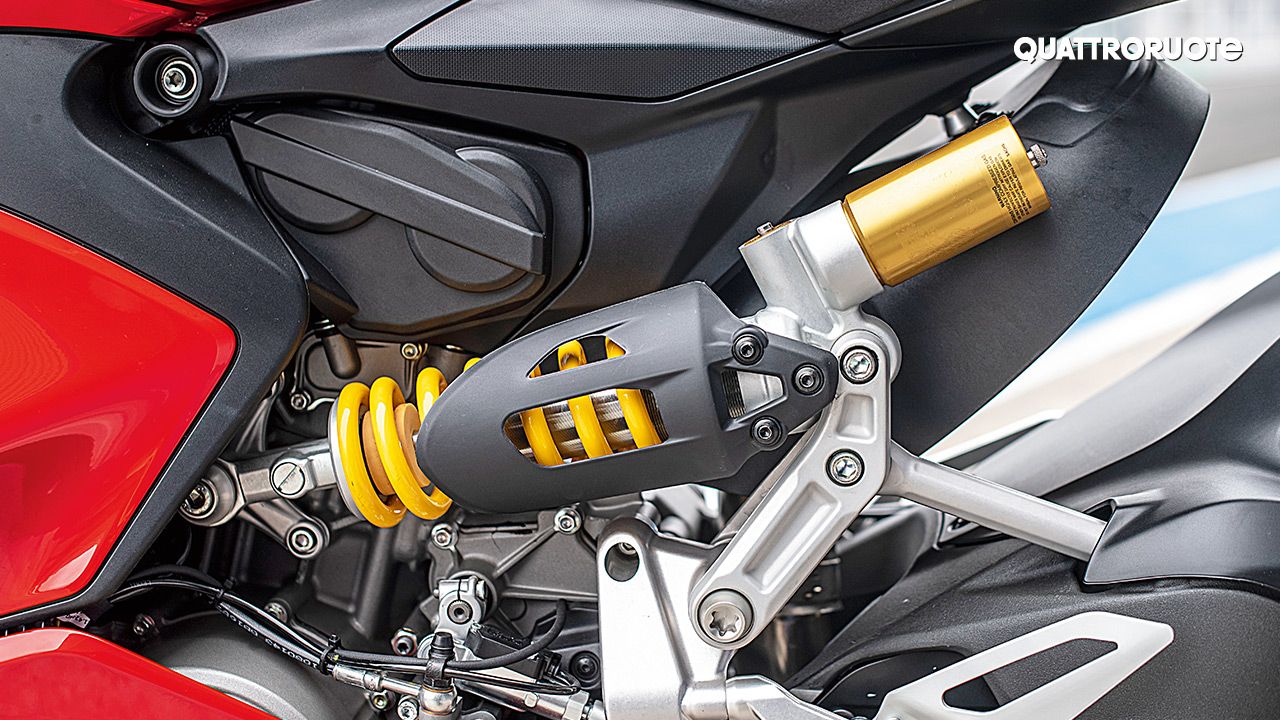 153bhp, 176kgs, and the unique, unmistakable design of the Panigale V4, what’s not to like? The latest twin-cylinder Panigale is not only brilliant on the track but also blows your mind on the road.

Big sports bikes of 200-plus horses are like an ‘all-you-can-eat’ dinner. You get up from the table, all swollen and puffy, and, then, at night, you regret it all. It’s too much of everything. In short, pure excess. The Panigale V2, on the other hand, is like a good old plate of lasagne – Bolognese, of course. It has lots of flavours, and all in the right amount to make you want to go for an encore, once you leave the table.

More Controls
Two numbers – 153bhp and 176kgs! What do they mean? In terms of riding, they simply mean that you can open the throttle without terror and without feeling your arms being torn off. Plus, in this specific case, there are controls, which have been updated and improved – now, there is also an inertial measurement unit (IMU), which, with its invisible presence, monitors traction control, wheelies, and ABS. 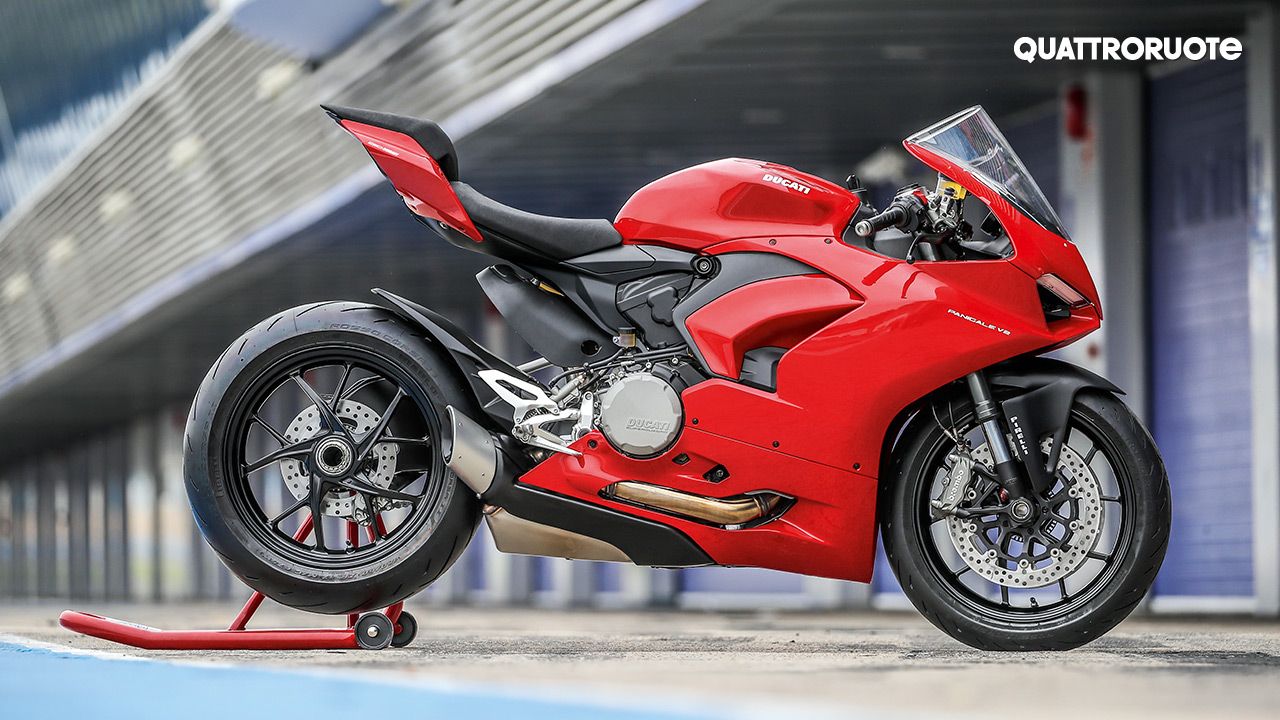 The new V2 – yes, we are talking about the Panigale V2 – also features a bi-directional quick-shifter, a single-sided aluminium swingarm, and under-engine exhaust, which you almost can’t see (but hear), and a very clean fairing, with a large air-intake framed by LED lights at the front, which proudly stands out. The overall design is a brilliant example of formal cleanliness, without even a hint of a superfluous touch. Yes, you can spend hours looking at the new Bolognese sports bike, which, from every angle, offers nothing but a sense of amazement and awe because it’s not only beautiful but also compact, neat, and well-proportioned.

The rear tyre (180/60) also adds to the lightness of the bike. And I don’t mind the way it is tuned to that slender, upward-leaning rear, completely free from a pair of overlapping exhausts, which, on the previous Panigale 959, cluttered its otherwise clean profile. The V2 also has room for a passenger, however, I can’t assure you that carrying one is a good idea. What I can tell you is that the space is rather cramped. However, you can enjoy it plenty on your own, and that’s enough. Believe me, I’m telling you this from experience – after four laps on the Spanish circuit, I was enjoying it so much that they would have had to shoot me to make me leave! 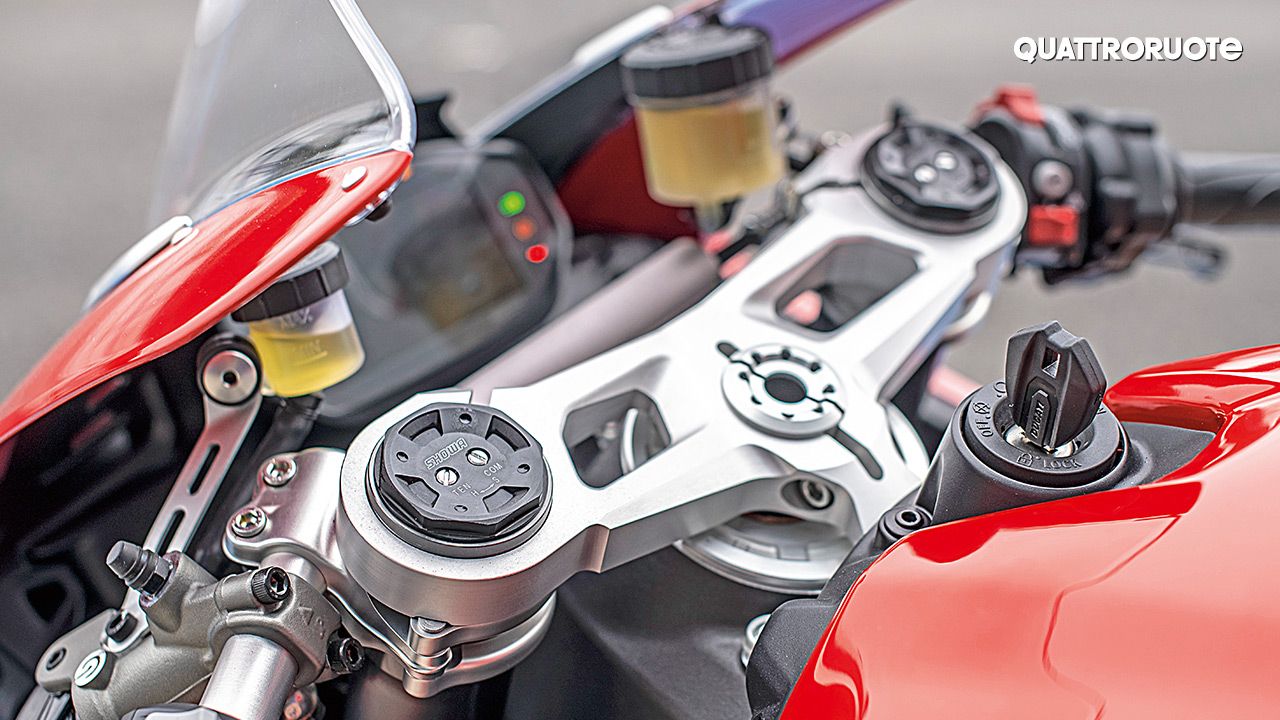 Can’t Get Enough of It
It’s a fact – you really can’t get enough of it. And the interesting part is that you don’t get tired at all. The moment you swing your leg over it, you find yourself at complete ease. The narrow tank allows you to squeeze it between your legs easily, and the wide handlebars and footpegs sit at the right height to make sure that you don’t have to contort yourself.

Also, you don’t have to lean forward, instead, you find yourself sitting on a motorcycle that’s not only compact but also inviting and comfortable. In short, it readily allows you to embrace every aspect of it.

The twin-cylinder sounds a little husky, but not rude or intrusive. At first, the 153bhp of the twin-cylinder seems a bit lazy – up to 5,000 rpm, the thrust is quite calm, even after adopting the most extreme engine mapping. But, once you cross this mark, you find yourself flying until the limiter kicks in, which you must know how to anticipate – at first, it will seem like a case of coitus interruptus – simple because the twin from Bologna has so much to offer even beyond 11,000rpm, but it’s silenced in a somewhat abrupt manner.

However, you can make peace with it by moving to the next gear, without pulling the clutch and without losing too many rpm’s. The quick-shifter (bi-directional) is part of the rich electronic equipment as standard and ensures very smooth and fast gear changes. You should, however, be careful to not leave your foot resting on the selector – the control is, in fact, quite sensitive.

In the meantime, you can enjoy the chassis, suspension – which is not too rigid and very precise – and the braking system, which refuses to give up even after numerous laps. If you can’t find anything wrong with the suspension setup, let me spot a niggle for you – you may like to have a little more support from the fork during the most extreme braking manoeuvres. The fork, however, is fully adjustable, which means that you can tune it to suit your riding style.

The engine brake control (like that of ABS) can be set to three levels. With both on the middle level, riding is a pleasure without any invasive intervention from the electronics, which, however, remain alert and active at all times. The traction control is excellent – it’s now predictive, and its interventions are timely and very soft. 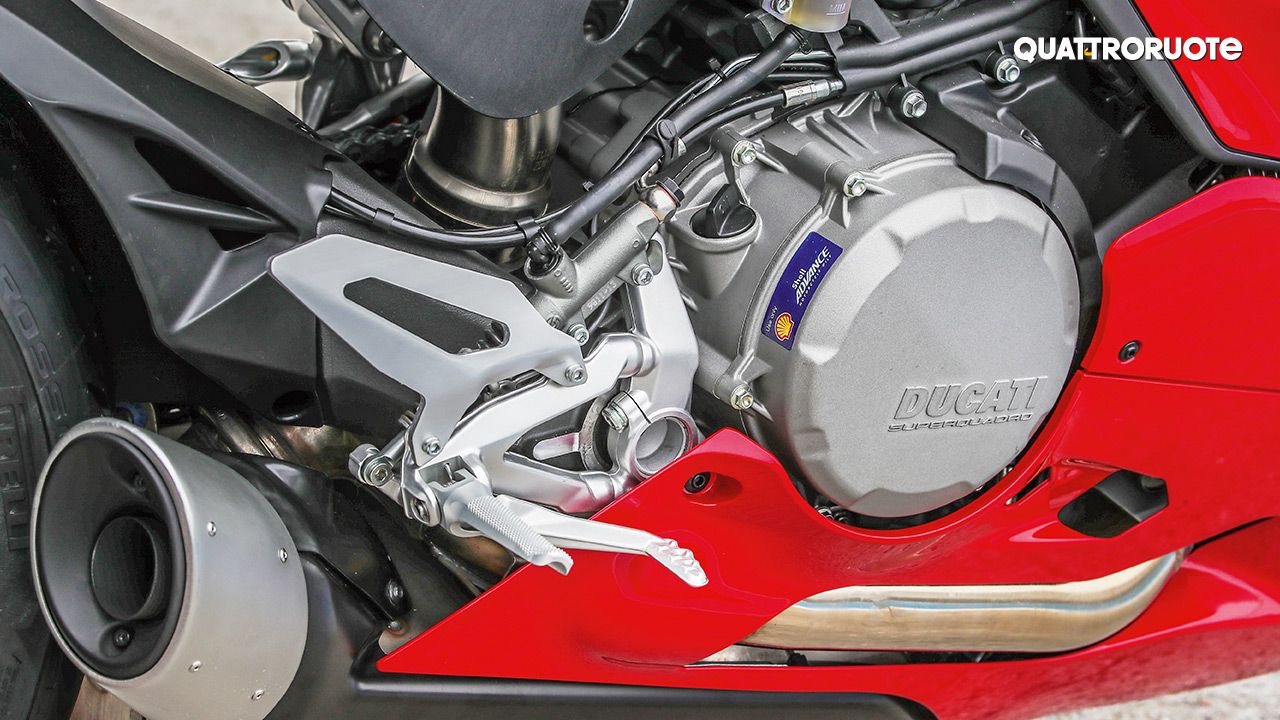 More Taste than Trouble
Lightning-fast in changing direction and extremely stable while attacking corners, the new Panigale V2 will make you feel at ease if you're used to low-power machines and will make you enjoy the ride if you're familiar with high-powered machines. As already mentioned, you can open up the throttle while exiting a corner, without any terror of being catapulted who knows where. And before you know it, you’ll find yourself knocking on the next curve, and, believe me, you’ll enjoy every bit of it – not to mention the fact that its progress on the straights is exciting, to say the least.

As I’ve already said, very aggressive braking makes the fork pump a bit, but it’s not too much of a problem – it’s just a matter of finding the right setup. The bike, in the meantime, doesn’t slow down for long – a light flick of the wrist, and off you go. Thanks to its weight of just 176kgs – it becomes 200kgs with fuel – it feels even more agile. Open the throttle, and the bike seems like an extension of your body – albeit a very expensive extension at a price of Rs. 16.99 lakh, ex-showroom – but an enjoyable one without a doubt.

Smaller to whom?
Meaner, more powerful, and even more beautiful! Compared to the previous 959, the Panigale V2 has improved inside and out. And it’s BS6 compliant 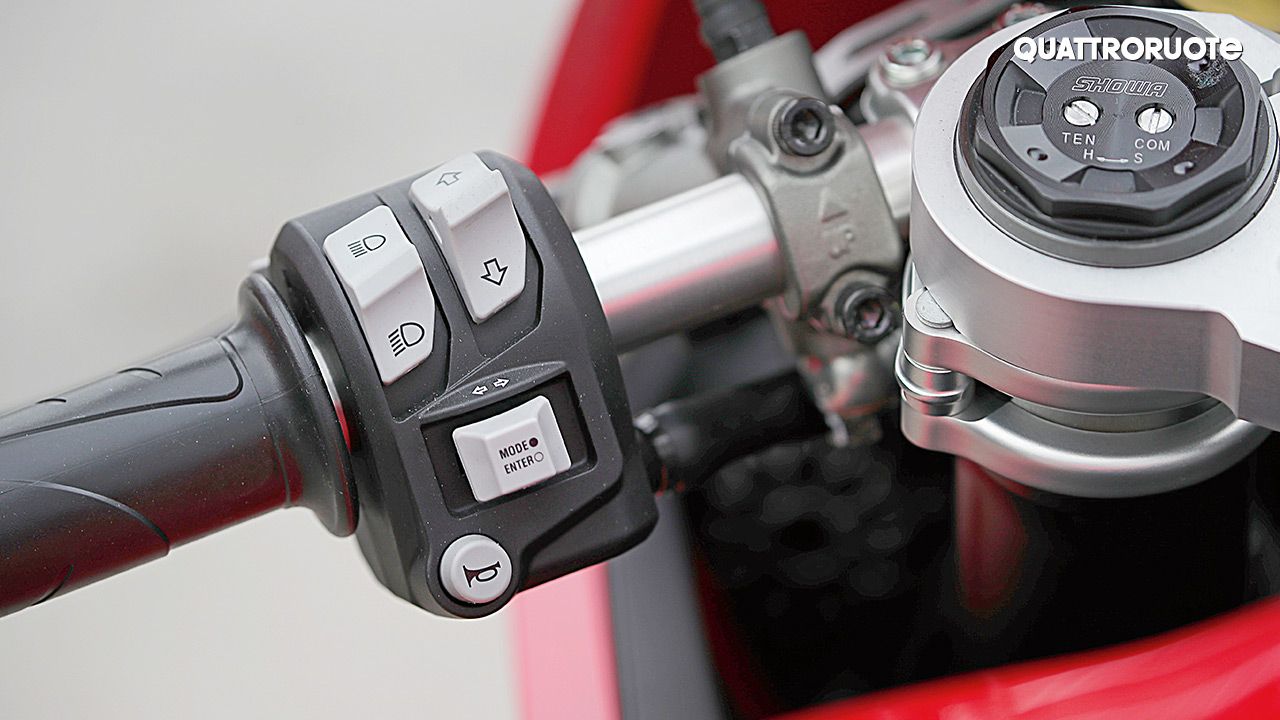 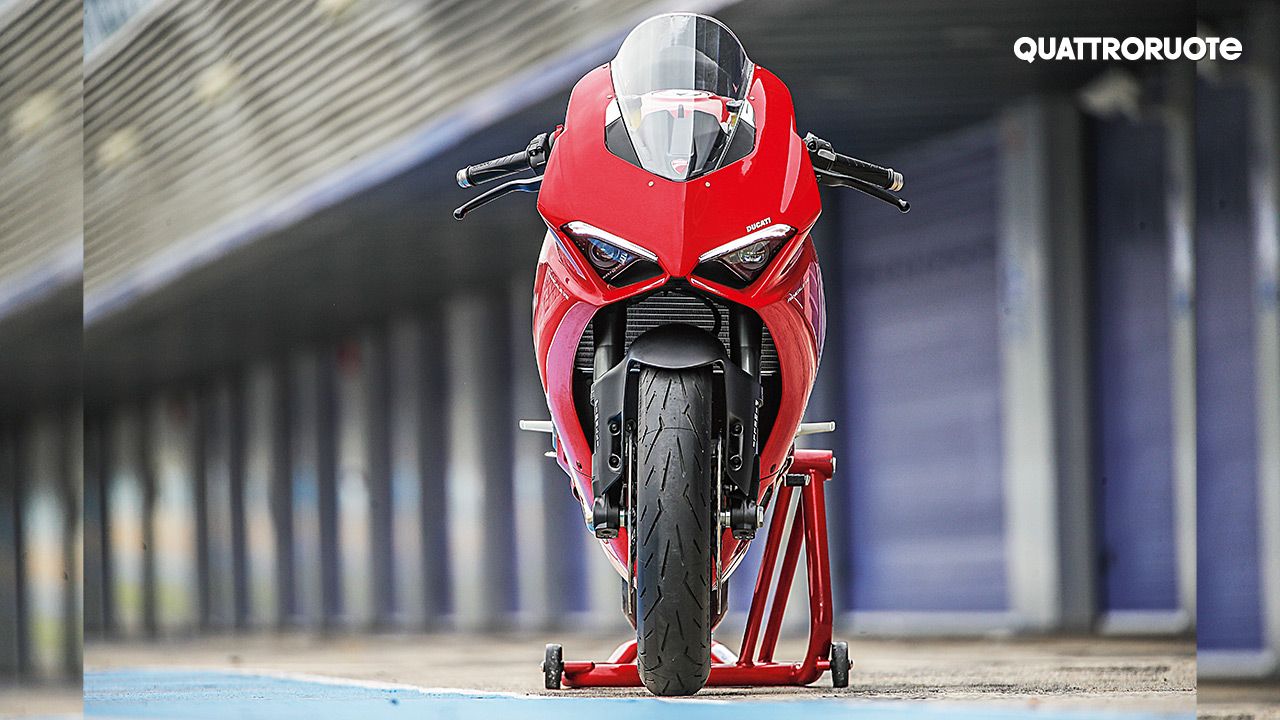 Sinister Look
Double-camber plexiglass, LED lights, and voracious air intakes, which powers the new airbox. The breathability of the twin-cylinder has improved and so has the combustion, thanks to the new injectors 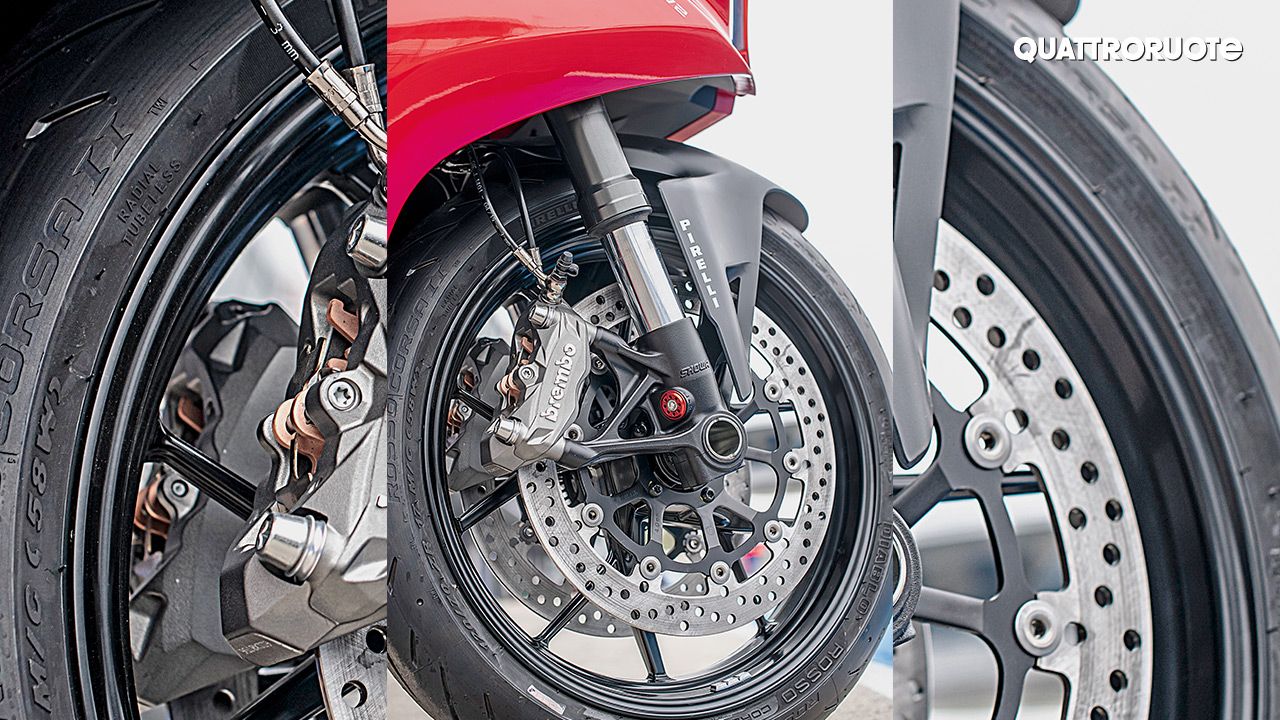 Beyond The Average
High-level equipment for the Panigale V2. Above, the front brake system with the 320mm dual-disc system from Brembo, with radially mounted callipers. ABS cornering is standard and works in conjunction with the inertial platform. On the top right is the fully adjustable SACHS mono-shock along with the new aluminium single-arm. Below that is the unique exhaust silencer, placed under the engine for mass centralization. 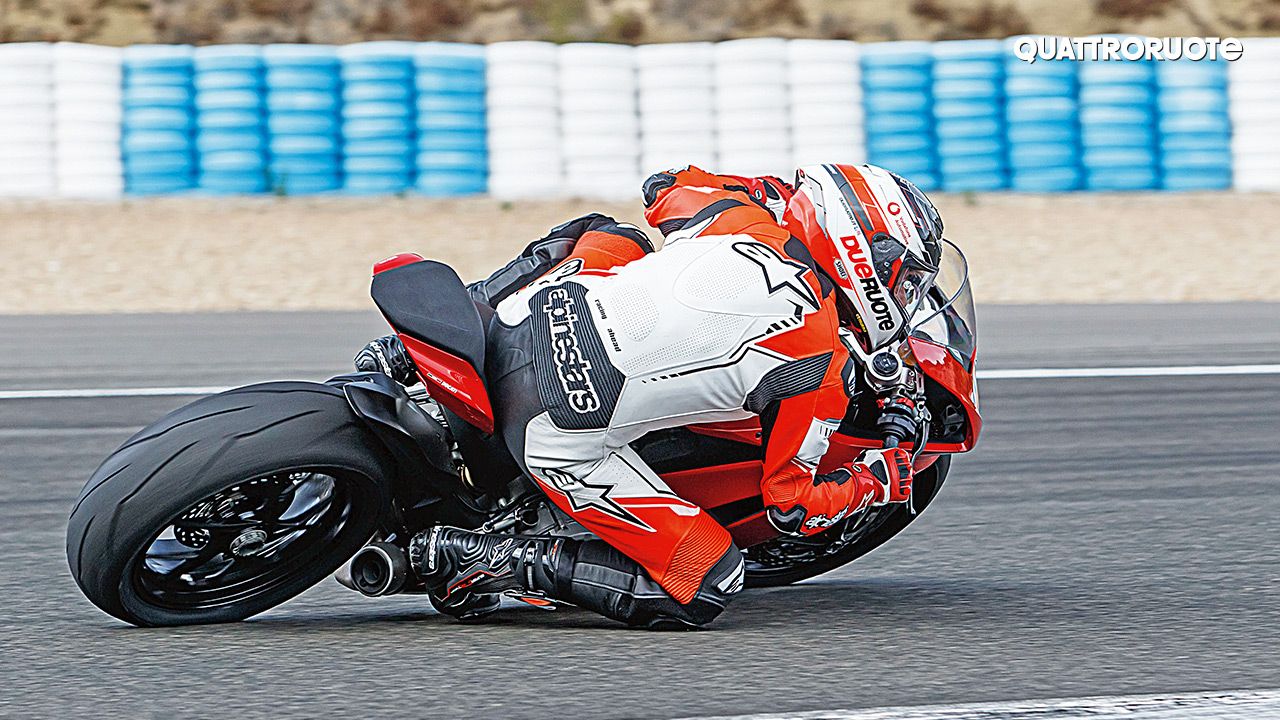 Open the throttle, and the Panigale V2 will feel like an extension of your body