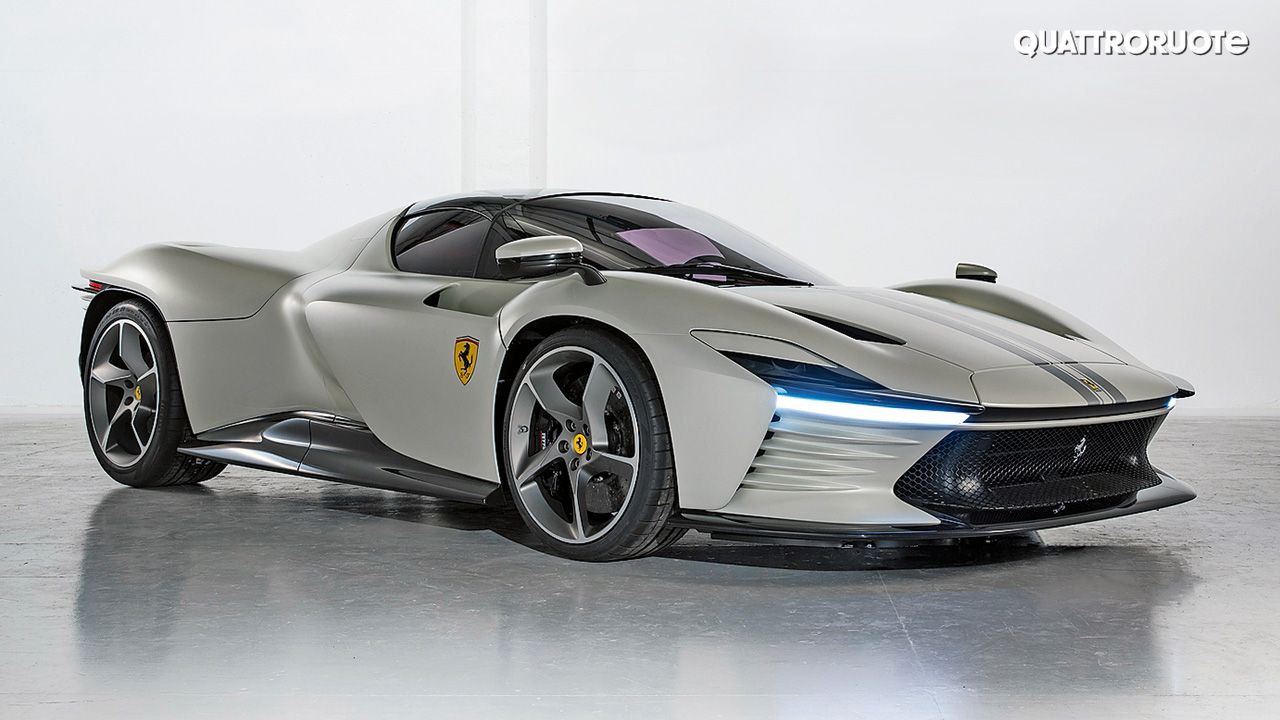 Inspired by Ferrari’s late 1960s racing prototypes, the Daytona SP3 is a unique and refined car, with a V12 that develops a whopping 829bhp. Its designer, Flavio Manzoni, tells us more about it…

The credit for making the Daytona SP3 a reality belongs to Ferrari Design Director Flavio Manzoni and his team. After witnessing the unveiling of the Icona worldwide, about a month ago, reserved for a circle of a happy few, and after having studied and admired it, we wanted to hear from the people who conceived it. Because if it’s true that every new Ferrari engages with the past, as seems to be the case with the SP3 – as it was for the Monza SP1 and SP2 that preceded it – there must be something more than what’s apparent.

Now, the reference to its history is incessant and inherent in the very name, Icona, which was given to the program. And what a history it is! The Daytona’s soul comes from the turn of the 1970s, which, for many, is the golden age of Ferrari’s Sport prototypes – like the ones that triumphed in the 1967 24 Hours of Daytona.

Now, the SP3 is an ideal link between the past and the future, considering Ferrari’s expected return to the top class at Le Mans in 2023 with its hypercar. 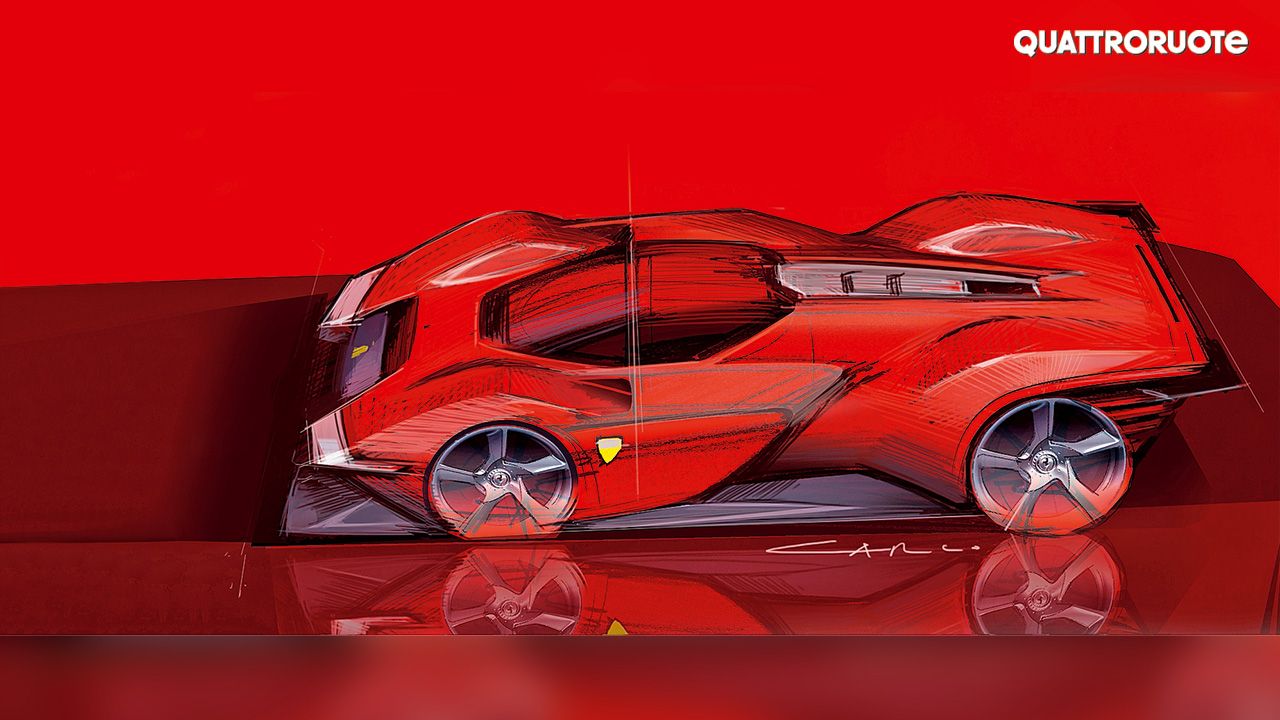 The Daytona SP3 (above, a sketch) is the brainchild of Flavio Manzoni, Ferrari’s Design Director (below). The car’s racing origins are evident – a profiled nose, an advanced passenger compartment, ‘sloping’ sides, and a long tail, like that of the Sport prototypes of the past. A spectacle for the eyes and the senses, it will be limited to only 599 examples. 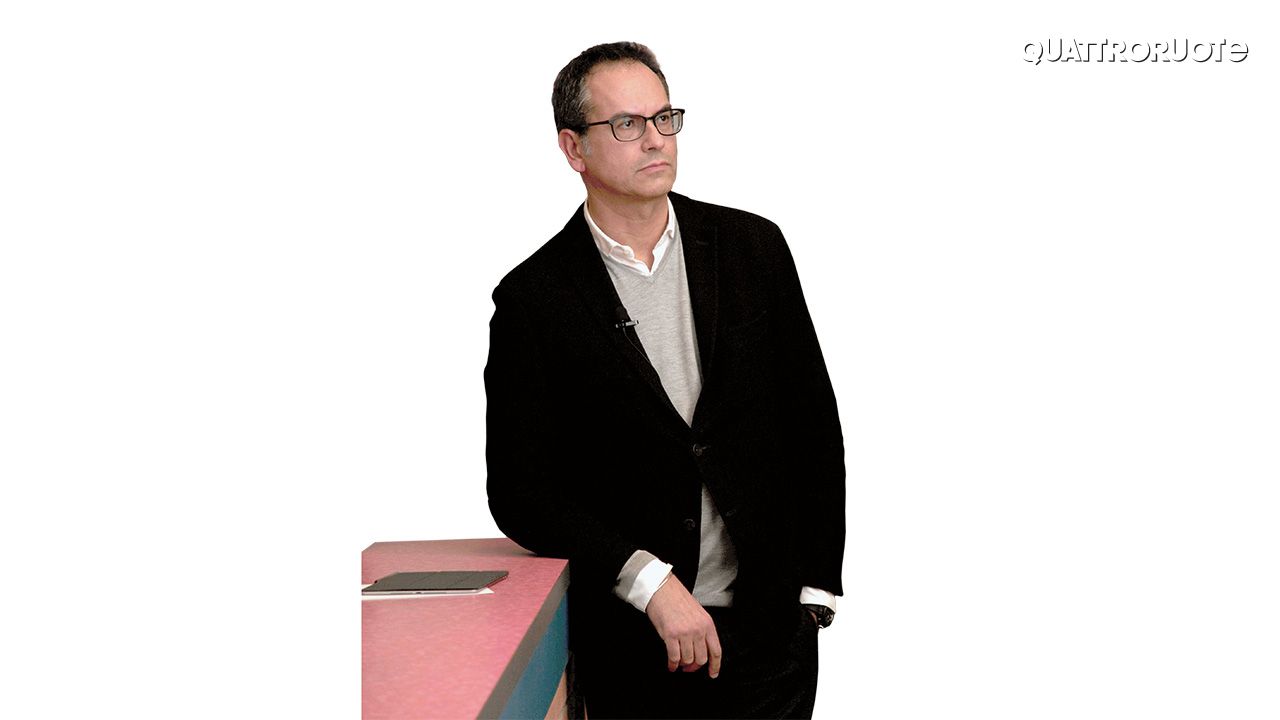 Once we have identified the source of its inspiration, it’s now time to see how that inspiration was realised and integrated into a modern-day car – a task accomplished by Manzoni and his collaborators – Carlo Palazzani for the exterior and Fabio Massari for the interior – in synergy with technicians and engineers from Maranello, who used a non-hybridised 6.5-litre V12 engine with a 9,500rpm redline.

‘In designing the Daytona SP3,’ says the Sardinian designer, ‘we did not resort to the style of a specific model but started from the idea of what a modern, sophisticated, sculpturally shaped Sport prototype could be. We looked at several models – from the 330 P3/P4, which inspired generations of designers, to the 312 P and the 512 M, cars that have contributed to creating aesthetic benchmarks. Although designed for racing, they have a very strong identity and, at the same time, are beautiful. It’s this spirit that we wanted to incorporate into the design of the SP3, without regressing to the retro styling – something that Ferrari cannot afford.’ 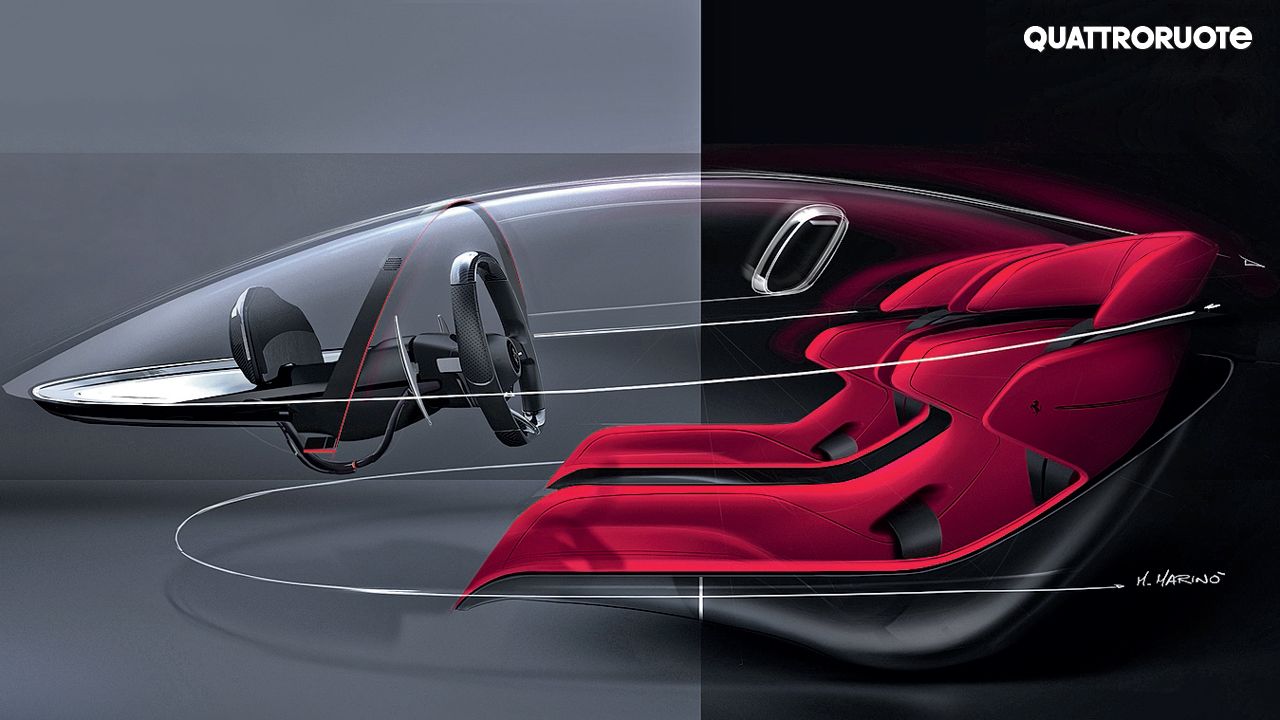 So, what traits from the past were infused into the Daytona? ‘When you look at those cars, perhaps, the first thing that strikes you are volumes and proportions, such as the dome of the 330 P3/P4, which we incorporated with the vertical line of the windscreen (see above) and which gives the ‘cab-forward’ look; on the other hand, the inspiration for the side panel came from the taut, vertical side of the 312 P and 512 M. Then there are the aerodynamic carbon fibre ‘flicks’ placed under the front headlights and on the rear fender, which recall the 330 P3/P4 and the 350 Can-Am, but they also have a very precise aerodynamic function.’ All this makes you wonder how the company’s top management reacted upon receiving the first sketches of such a powerful car. 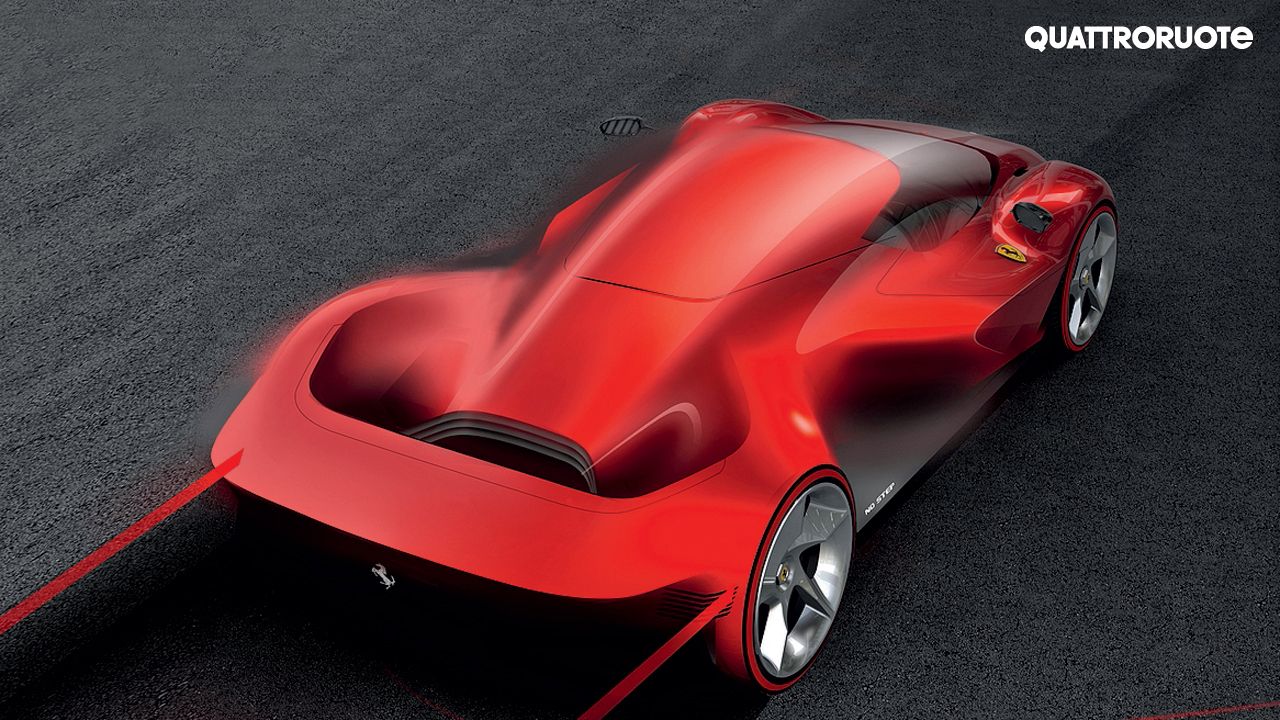 Manzoni stops us immediately. ‘Although we had developed some really strong solutions in the early stages of the project, the idea of the prototype sports cars was immediately approved by the entire management, who were enthusiastic about it, which made our work easier. Equally strategic was the phase of updating the ideas from the past.’ The designer continues, ‘At the root of the project lies a deep knowledge of our past, but, also the search for new forms, carried out with absolute freedom of expression. My team has solid artistic training that allows them to grasp the most complex nuances, so as to create an original, unique design. For us, the form must always follow the function, and even with a car that comes from a more ‘design-driven’ approach than the rest of the range, synergy with the technical departments, especially the aerodynamicists, is essential to achieving the best possible result.’ 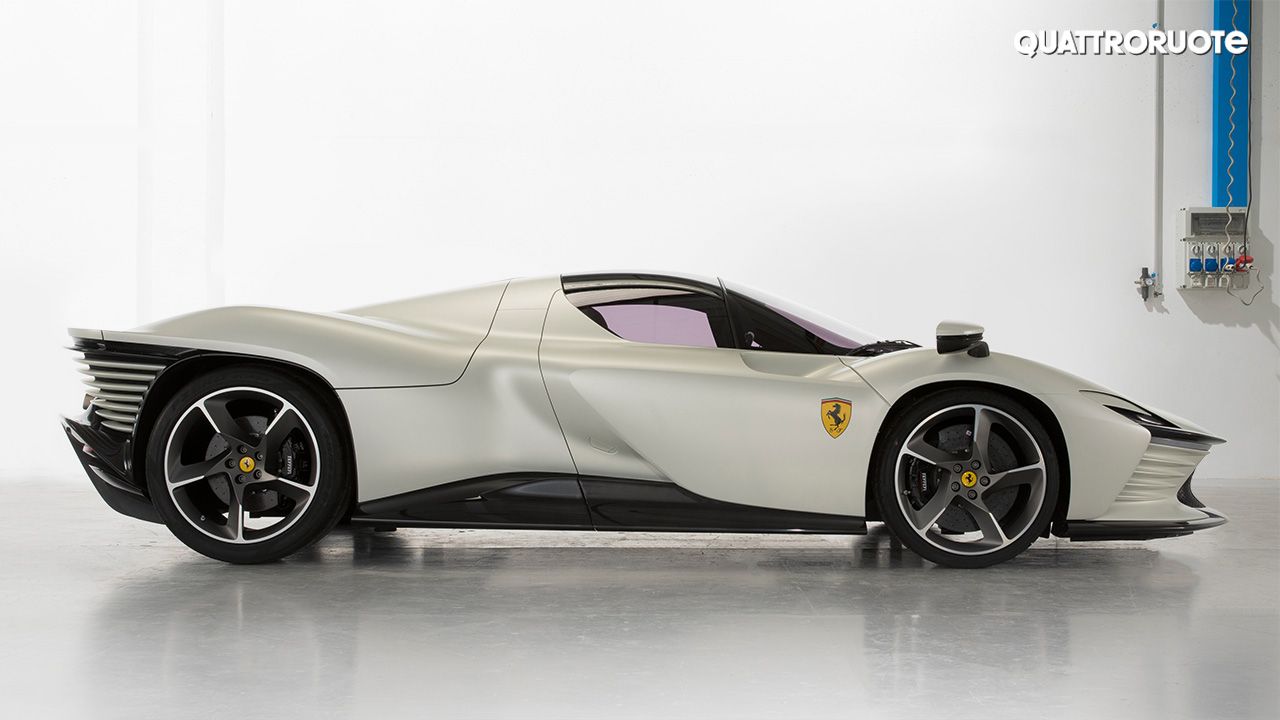 Indeed, the Daytona SP3 can afford a few privileges compared to the stock Ferrari. ‘The Icona models give us a unique opportunity to develop the style with fewer engineering constraints,’ says Manzoni, ‘and so, after the Monza SP1 and SP2, with the Daytona SP3, we were able to carry out a design-driven project, striving to achieve pure beauty. An example of the freedom granted to us is the adoption of the ‘eyelids’, which recalls the effect of the retractable headlights of some models from the past. The complexity and additional weight would not have been acceptable on a production car. But on the SP3, they serve an important stylistic function, so they were welcomed with enthusiasm. Another example is the rear-view mirrors mounted on the front fenders, which are reminiscent of those on the Sport. In this case, however, it was a solution shared with the aerodynamicists because it made it possible to create the air intake on the top-front part of the door. The purity of the shapes required a great deal of work with the technicians to keep the lines as clean as possible – the result is the lowest coefficient of drag for any Ferrari, using only passive aerodynamics’. 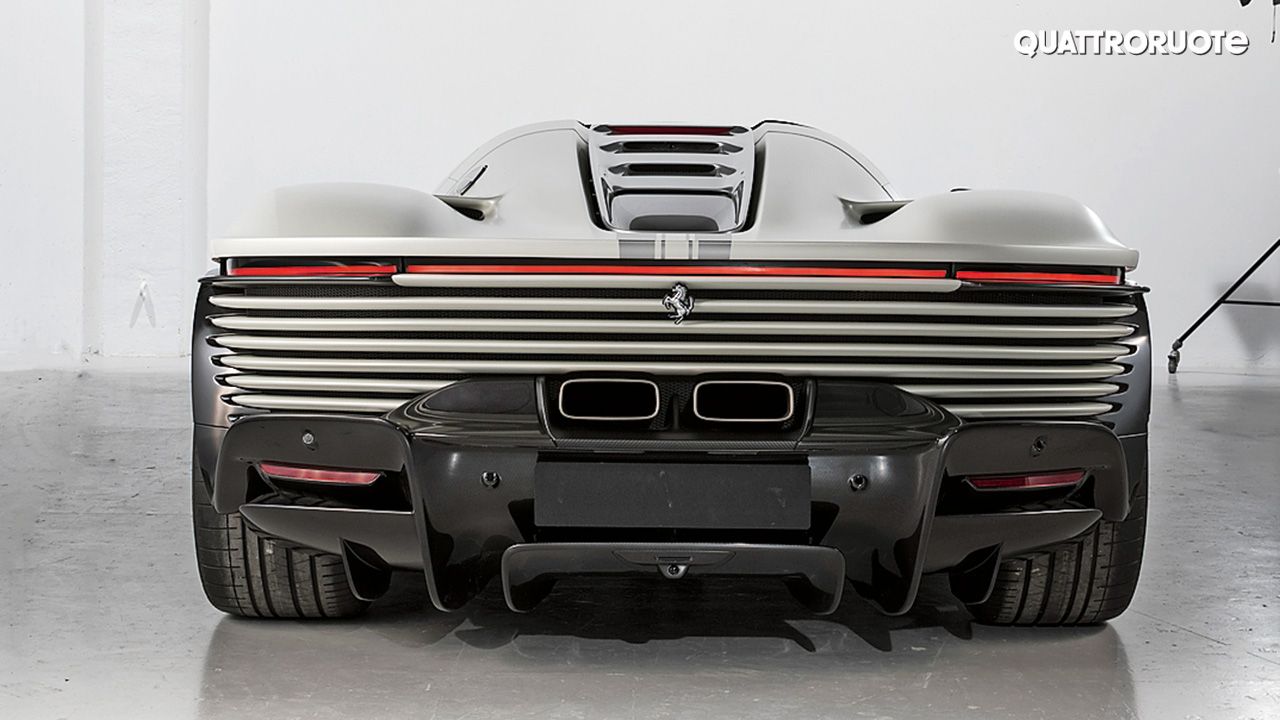 And those rear slats... ‘They are another example of the freedom we were able to exercise. On a production level,’ concludes Manzoni, ‘the composition of the rear bumper elements is incredibly complicated. However, we defended it strongly – these horizontal profiles on the rear serve to extract heat from the engine compartment and allude to the horizontal side vents of the 330 P3/P4 and the blades of the Pininfarina P5. But, above all, they allow us to create a pure, monolithic volumetric effect.’ 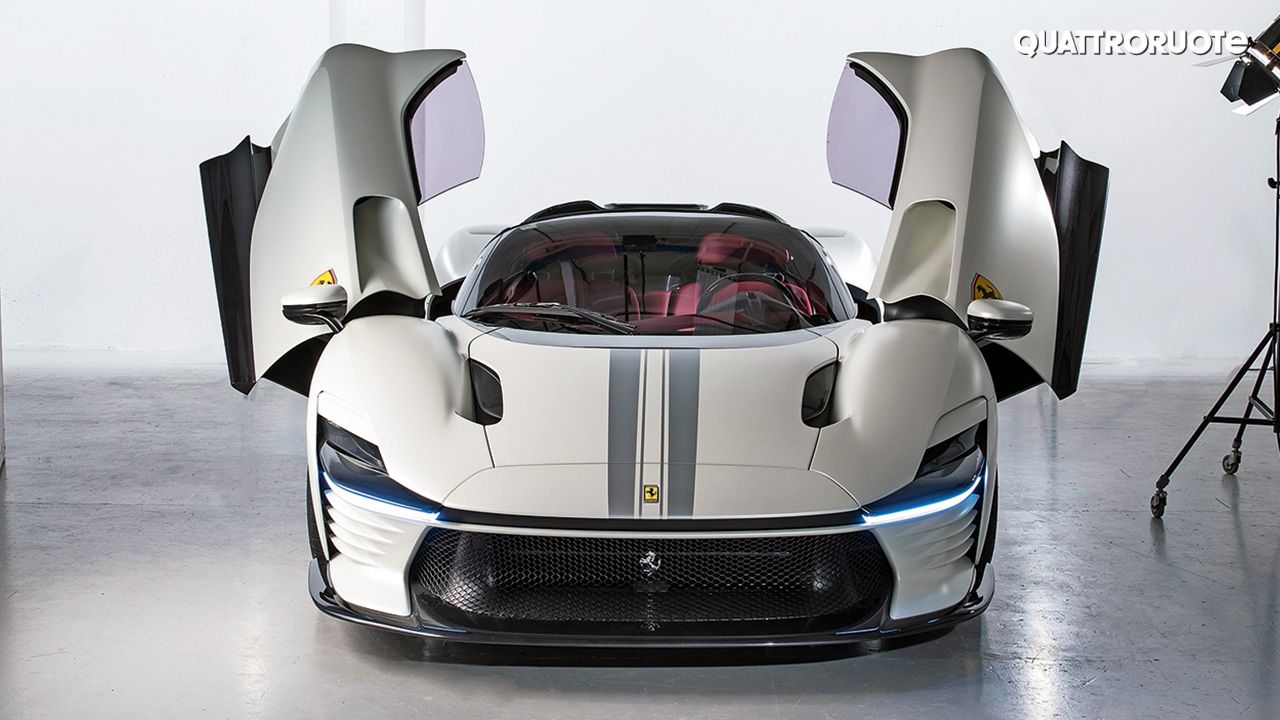 The light clusters are equipped with movable eyelids. The sinuous mudguards are impressive, on which the racing-style rear-view mirrors stand out. The SP3 here is in the Targa version, with a removable hardtop. 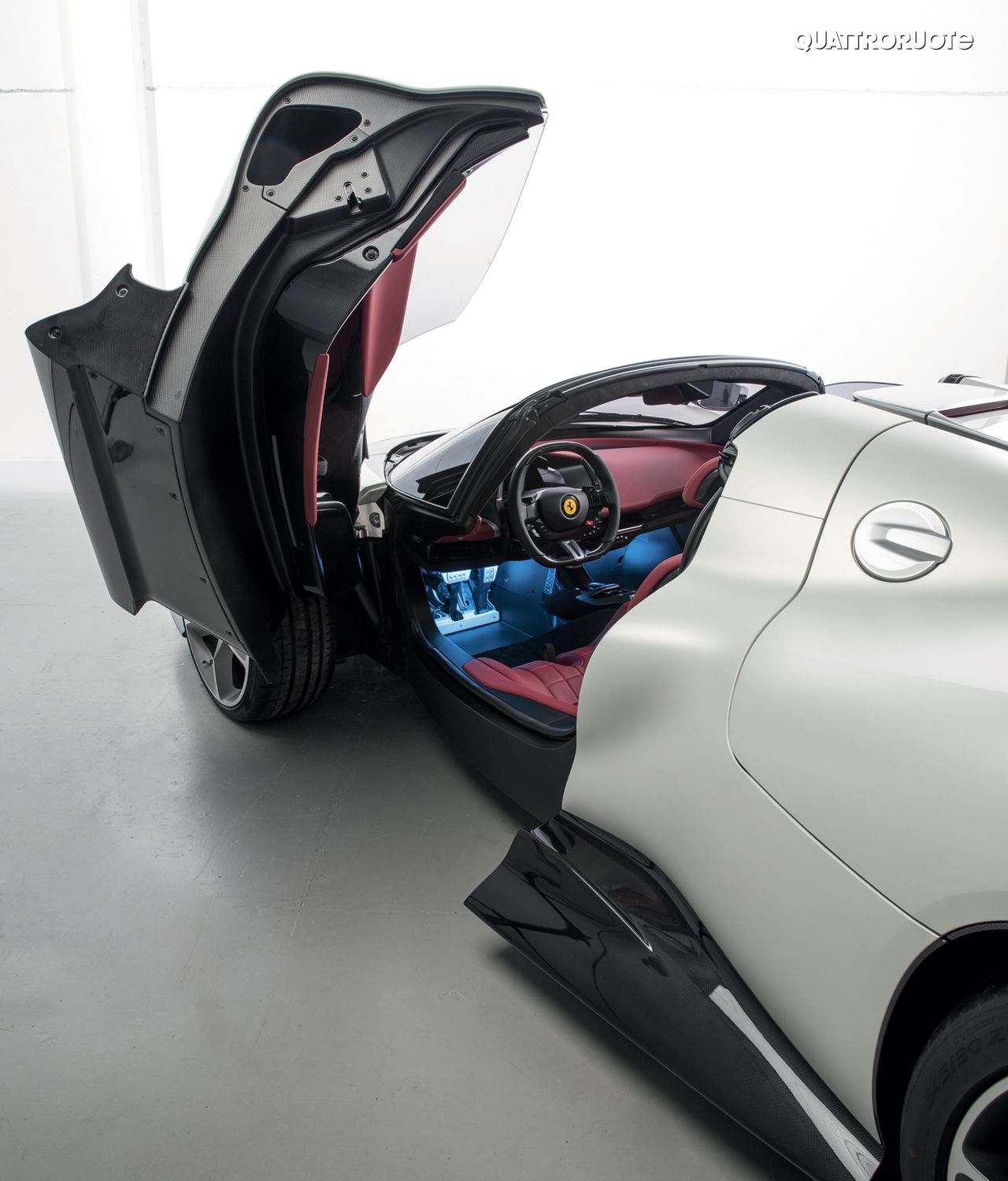 Above: part of the running board is integrated into the door. Below: The V12’s intakes and back vents; the 20-inch front wheels (the rears are 21-inch) 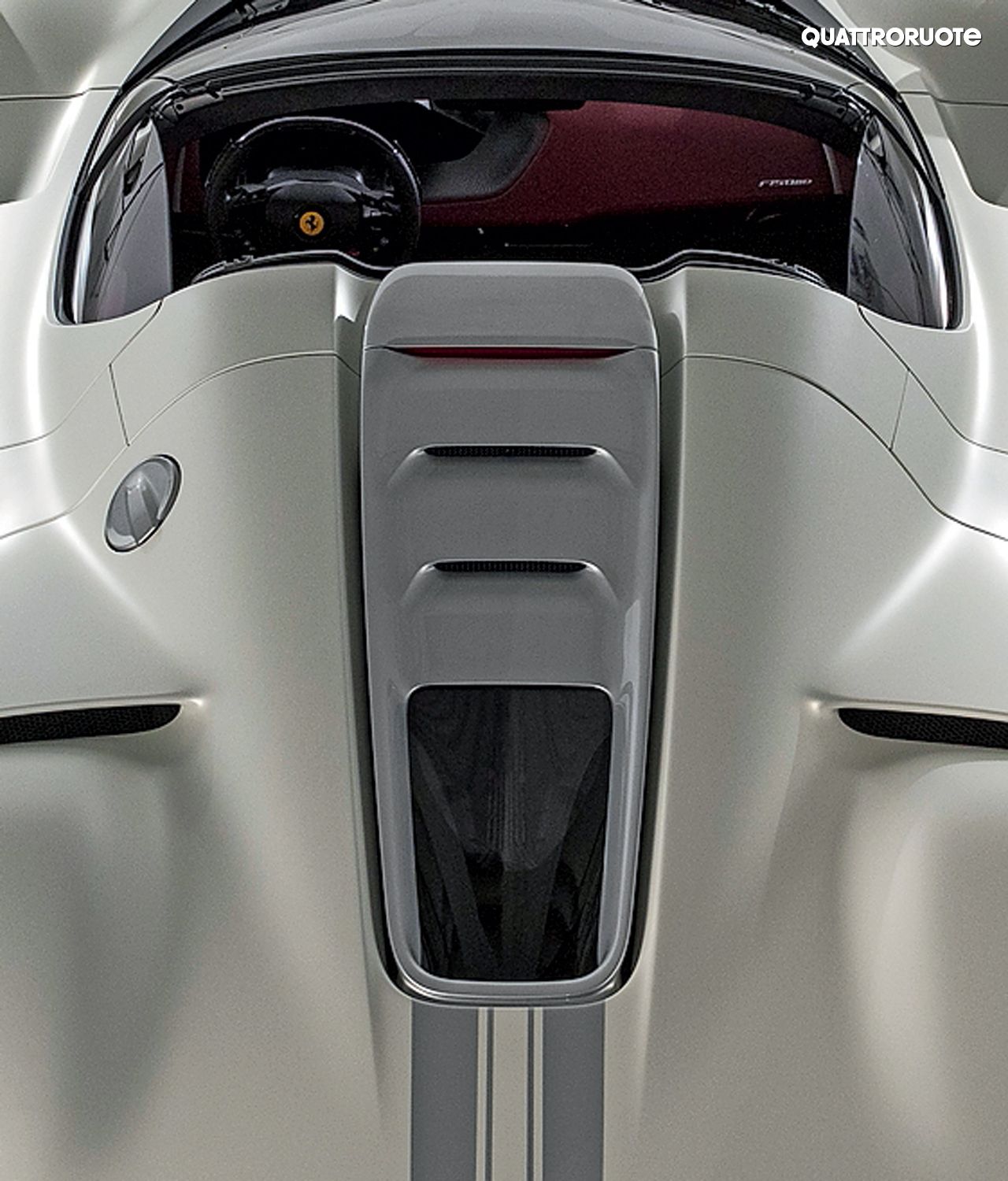 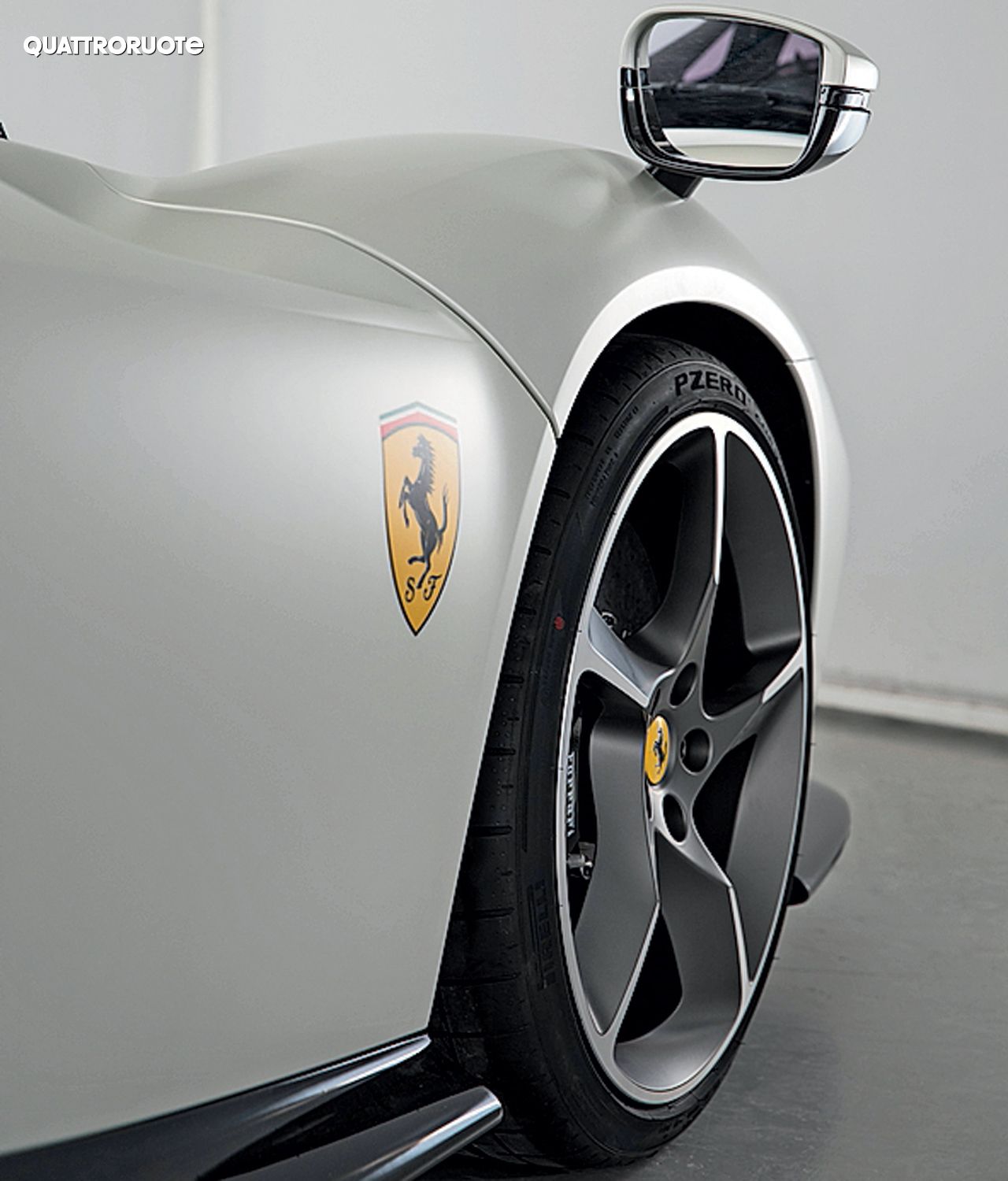 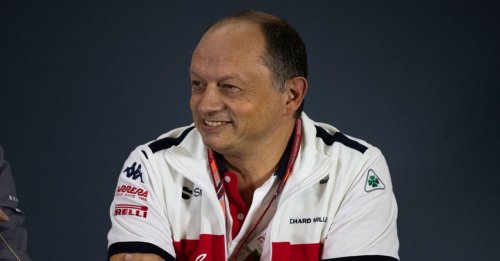 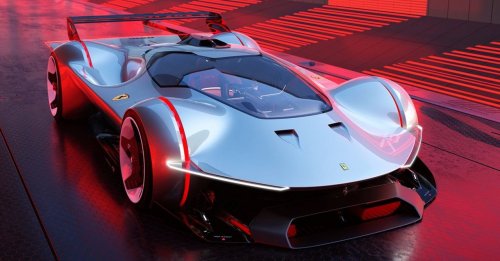 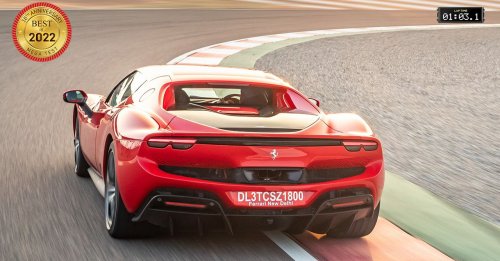 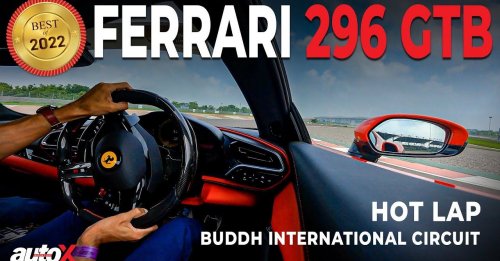