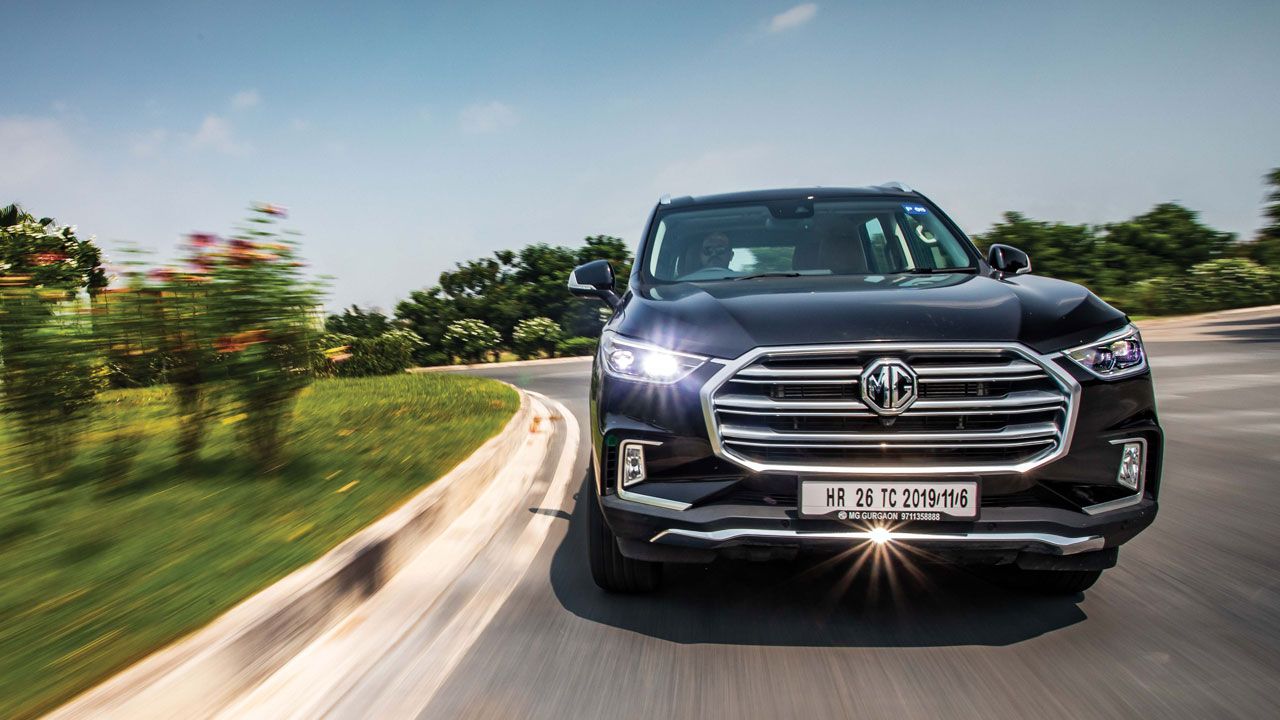 The MG Gloster is big, butch, spacious, and loaded to the gills with features. But, given the Toyota Fortuner’s absolute dominance in the full-size SUV segment, will the Gloster really be able to shake up the establishment?

Challenging the high and mighty isn’t everyone’s cup of tea. This is true in all aspects of life. Take automobiles, for instance. If a manufacturer wants to challenge an established leader of the market, it not only needs confidence but also a product that’s attractive enough to tempt customers to choose the challenger over the established leader.

And that’s where MG Motors come in, whose whole approach to the Indian market has been anything but ordinary. Despite the Chinese ownership of the brand, it has effectively projected and promoted its British roots, which, along with an appealing television campaign, has helped it to carve out a distinctive niche for its products – the Hector and the ZS EV.

Now, to further its presence in the Indian market and establish itself in the premium segment, MG has now come up with its latest SUV – the Gloster, which is much larger than the brand’s other products and will be the brand’s flagship offering in the Indian market. While MG is yet to announce the pricing of Gloster, given its size, features, and positioning, there’s no doubt that it’s aimed squarely at the Toyota Fortuner, with the intention of eating away at its market share. 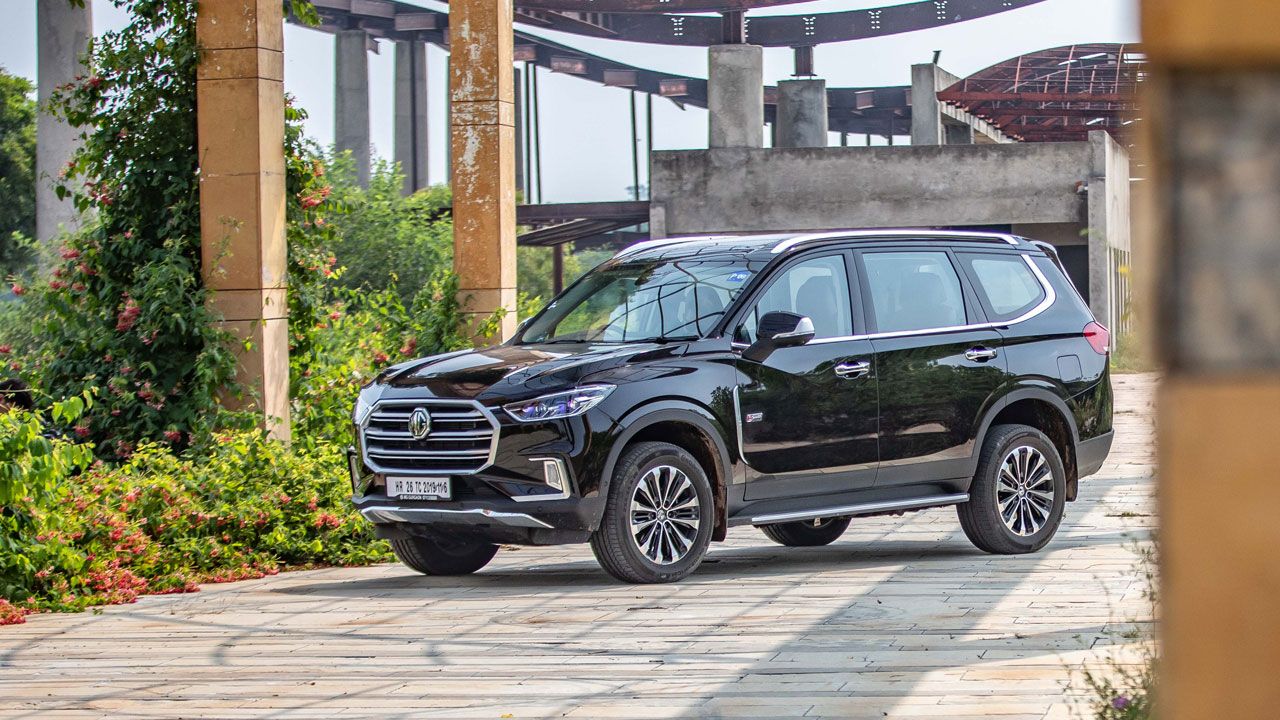 And to drive this point home, MG has made the Gloster larger than both the Fortuner and the Ford Endeavour. At a length of almost 5 metres, the Gloster is huge in every sense of the word. The design of the Gloster is also quite unique, but certain elements of the design do seem to be inspired by the BMW X5. This is particularly evident when you look at the dash and centre console layout.

One of the highlights of the design for me is the restrained use of chrome, which makes the SUV look more elegant and less ostentatious.

With well-proportioned front and rear overhangs, when viewed in profile, the Gloster looks quite balanced, which gives its design a sense of unity. But that’s not to say that its design doesn’t have any shortcomings. For instance, despite its 19-inch wheels, wearing 255/55 tyres, they still look a tad too small for its mammoth size – it would look better with 20-inch wheels! The massive Gloster badging and its quad tailpipes at the rear are also a bit too much in your face for my liking. I think that a simpler and more restrained design would have made it a whole lot better, for the current rear-end design gives you the impression that the Gloster is trying too hard to be unique and stand out – something that it doesn’t really need to do.

The biggest highlight of this SUV – an aspect that gives it a clear edge over the competition – is the sheer acreage of interior space that it offers. With its humongous size, cabin space in the Gloster is enough to comfortably seat six full-size adults. The second row of the Gloster is a nice place to be in, for it offers lots of headroom, legroom, and shoulder room. And the panoramic sunroof adds to the airy feel of the cabin. However, it’s the 3rd row of the Gloster that surprises the most – even a six-foot-tall adult can sit there with room to spare. This aspect of the SUV is certainly unmatched by its rivals.

Now, this spacious interior comes at a cost – a heavily restricted boot space. With all three rows in use, the boot space of the Gloster is comically small, which could be a problem on long road trips, especially if you have more than four occupants on board. 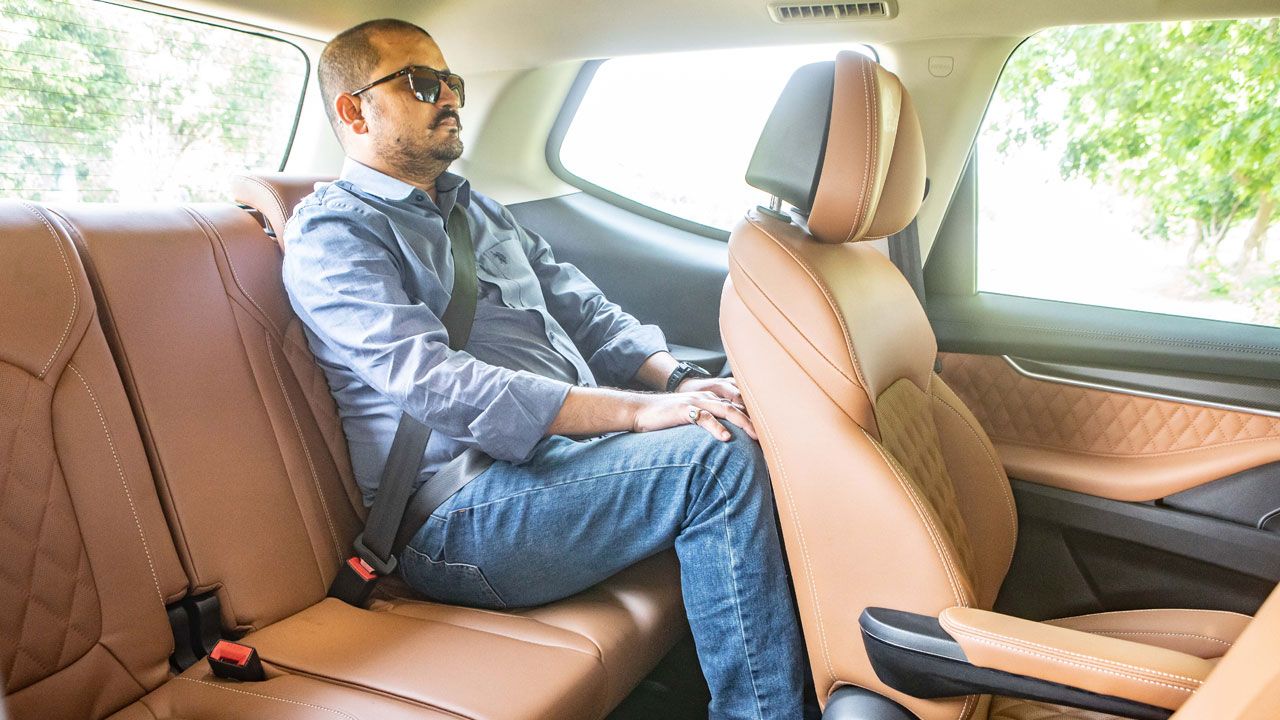 LOADED TO THE GILLS

While it’s definitely ahead of its rivals in terms of space, it’s in terms of standard features that the Gloster really boggles your mind. To give you an idea, the official specifications sent to us at the time of our test drive ran into several pages – the iSmart connectivity suite features over 70 features (let that sink in for a minute)! These features include the ability to start the car remotely, receive over-the-air (OTA) updates, and many other connectivity, personalisation, and convenience features. Many of these iSmart functions, such as controlling the sunroof or changing the cabin temperature, can also be performed via voice commands.

The large 12.3-inch touchscreen works quite well and features Apple CarPlay, Android Auto, and the Gaana app, which allows you to play a wide variety of music. Facing the driver is an 8-inch colour screen in the instrument cluster, which is well executed and offers a lot of information. The Gloster’s interior feels quite decently built and has a good quality finish. The seats are large and comfortable, even during long journeys. The Gloster also offers a lot of safety equipment, including front, side, and curtain airbags, traction control, ABS, and EBD.

The Gloster is also the first vehicle in its class to offer Automatic Driver Assistance Systems (ADAS), which work automatically to mitigate chances of mishaps on the road. This includes Autonomous Emergency Braking, Lane Departure Warning, and Adaptive Cruise Control. Many of these features are only available on cars that cost multiple times the expected cost of the Gloster – the prices of which will be announced sometime in mid-October. 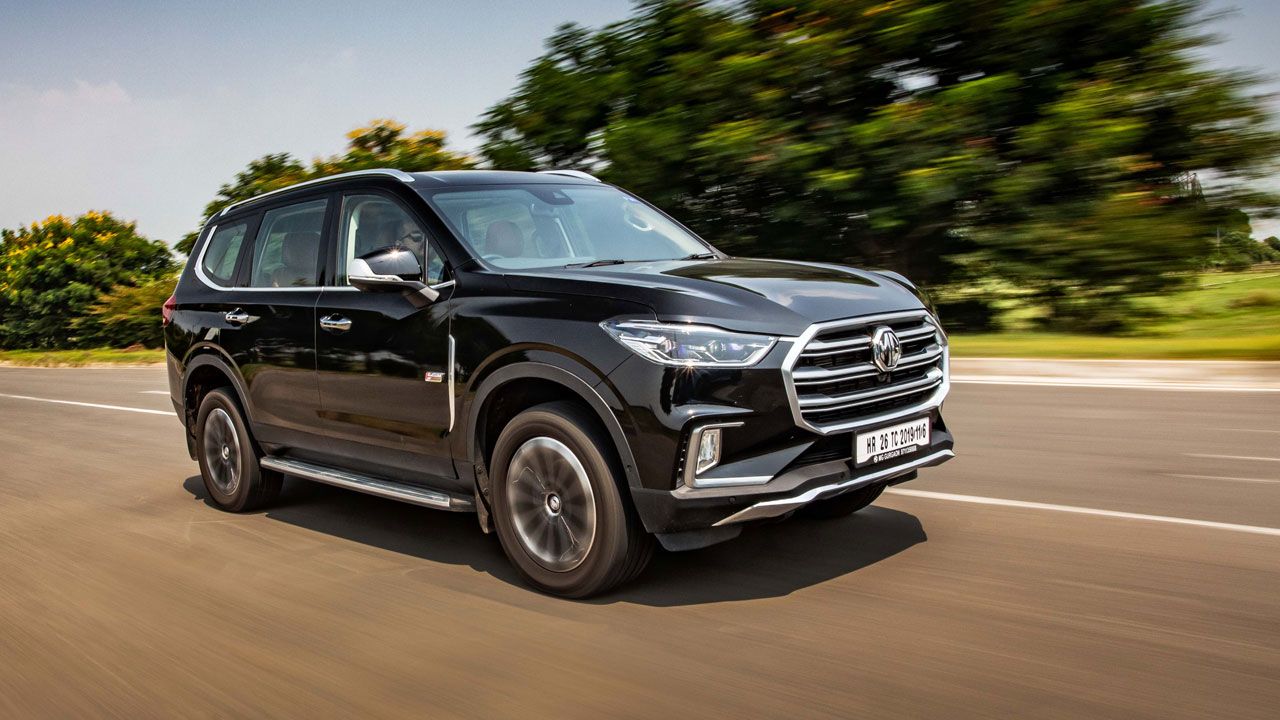 The moment you start the engine, you can’t help but be impressed by the refinement of the Gloster’s engine. The engine noise is very well controlled inside the cabin. Powering the Gloster is a 2-litre twin-turbo diesel engine, which produces 215bhp and 480Nm of torque – expect a single turbo, lesser-powered version of this engine, to power more affordable versions of the Gloster in the near future. The engine is mated to an eight-speed automatic gearbox, which shifts very well and is quite seamless in its operation. The Gloster also offers different driving modes and a lockable mechanical differential to helps its off-roading ability.

In terms of driving, however, the Gloster is somewhat of a mixed bag. Don’t get me wrong, with 215bhp, 480Nm, and a slick gearbox, the Gloster moves reasonably quickly, especially for a vehicle of its size. And under light load conditions, its performance is adequate, if not earth-shattering. However, at low revs, especially in traffic, the Gloster’s engine is slow to respond and needs a heavy throttle input to get it moving with urgency. It almost seems as if there’s a flat spot in the power delivery, especially with part throttle inputs. It can be frustrating if you’re trying to quickly aim for a gap and have to wait for the engine to wake up and respond.

On the other hand, the Gloster’s ride quality is quite fantastic – it handles all kinds of road conditions very well. Regardless of the speed or the road condition, the Gloster handles everything with ease, keeping occupants comfortable at all times. But, if you’re planning to drive the Gloster enthusiastically, let me tell you that because of its size and weight, its body roll is very pronounced and can be a bit disconcerting on tight, winding roads. Also, I’m not sure about its performance under a full load, given its already heavy weight. 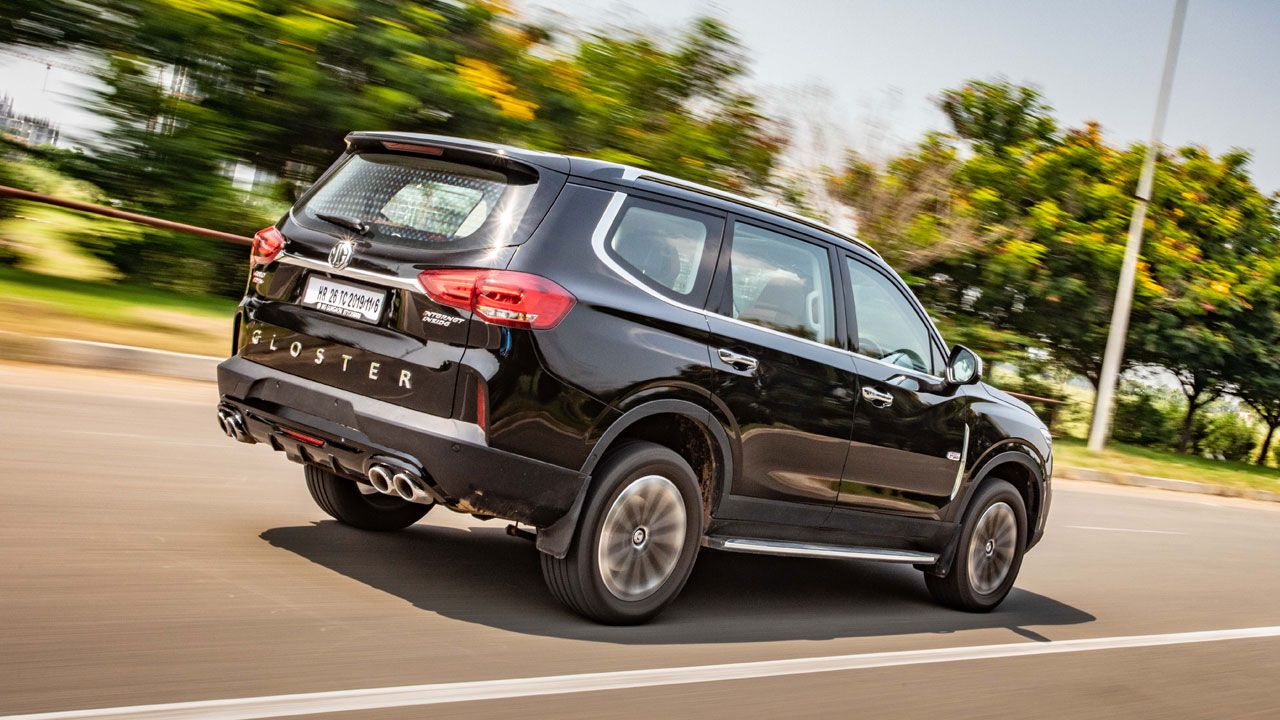 Now, when you’re trying to compete in a segment dominated by a Toyota product, the price and value aspect becomes a crucial component. And this will be critical for the Gloster too. The Gloster has an edge over its competition in term of size, design, space, and features. But it could do with a slightly more powerful engine to increase its high-speed cruising ability and also a rear-view camera with improved resolution.

All told, the Gloster is a great move by MG. It offers a good mix of refinement, space, and decent off-road ability, with its 4WD hardware. And while it’s not exactly a driver’s car, for the most part customers will be chauffeured around – enabling them to revel in the sheer extent of space and comfort available in the cabin.

So, if priced well, it could certainly make a noticeable dent in the Toyota Fortuner’s market share, given the fact that the Fortuner has been around for a few years now and is need of a mid-life refresh. And it’s here that the Gloster really shines, with a product that’s high on tech and design. 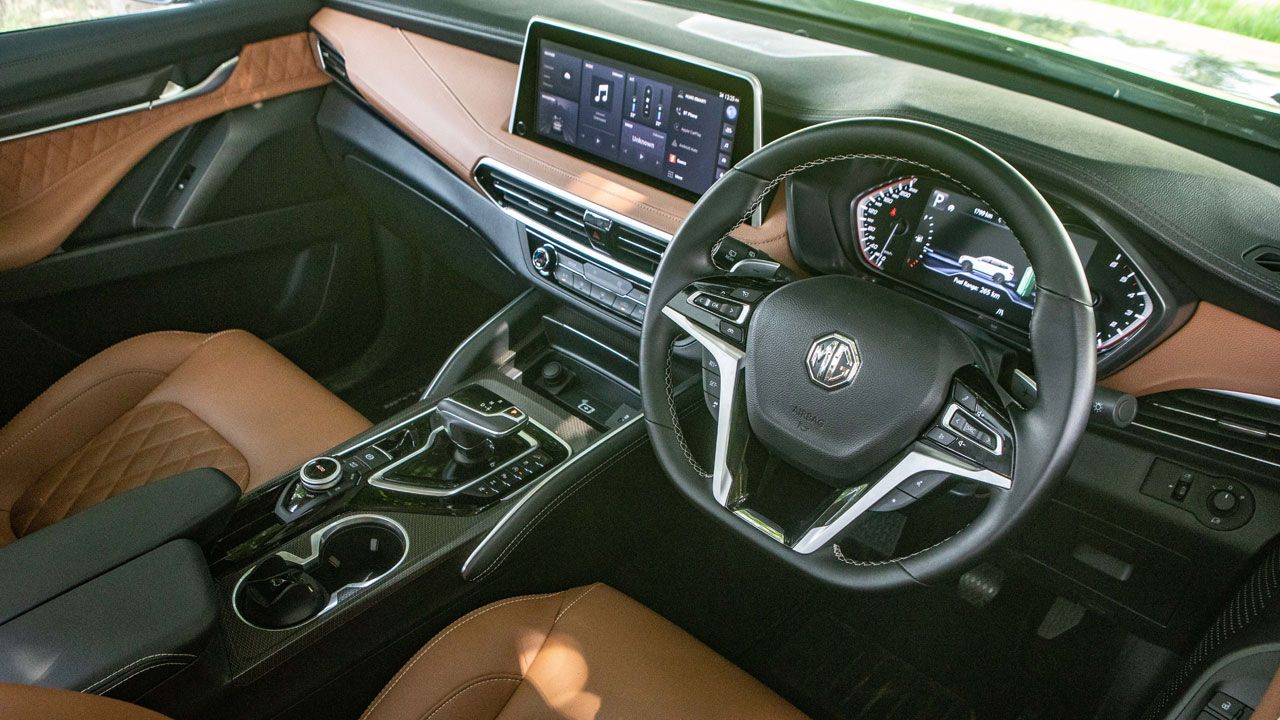 X-Factor: With its comfort, space, and features, the Gloster makes one hell of a case for itself. 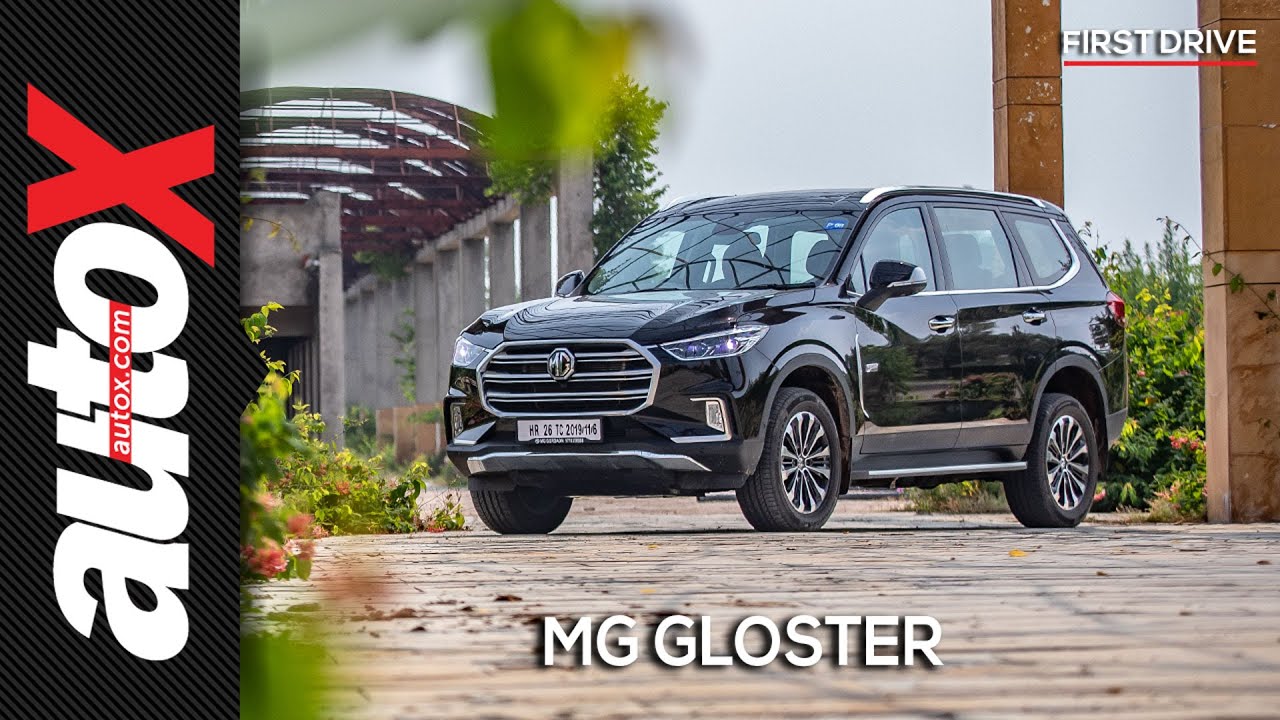 Design is not up to the mark

Im employee of MG gloster is not worth for money.. People who are all think for glostor please change your mind.. U will get better feature in other comapany than MG..I jus shared my opinon