Take a quick glance at the collection of motorcycles that we had at the Buddh International Circuit for our ‘Best of 2017’ awards, and you’ll see that premium bikes have soaked up much of the limelight this year. Of course, moto maniacs with a million bucks to spend are loving the availability of options, but the truth is that their tribe is very small in the grand scheme of things. There’s a large group of enthusiasts who keep a close eye on the affordable performance segment – a space that, over the years, Bajaj has become synonymous with. The Chakan-based bike maker once again did what it does best with the Dominar 400 – so much so that it stands right up there amongst the big guns. 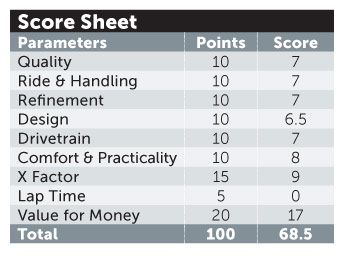 Despite being based on the engine of the KTM 390 Duke, the Dominar 400 feels extremely different from its Austrian sibling – in a good way too. The engine produces 34.5bhp in a tremendously friendly manner, with plenty of grunt in the mid-range. The 6-speed transmission shifts smoothly, and the slipper clutch allows aggressive downshifts while cornering. Complimenting all of these characteristics is its firm suspension and sticky MRF rubber that help in finding an undisturbed flow around the twisties – earning it a respectable 7 in terms of ride-and-handling. But the beauty of the Dominar is in its versatility – the bike feels as much at home in the city as out on the highway or up the hills. Keeping all of this in mind, the Bajaj Dominar 400 managed an impressive 8 in terms of comfort and practicality.

As is the norm with most Bajaj offerings, the ace up the Dominar’s sleeve is its affordability. At Rs. 1.55 lakh (ex-showroom) the Dominar 400 offers more value than anything else that went on sale this year. Bajaj requested us not to post a lap time on the Dominar 400, due to which it wasn’t scored in that category – had that not been the case, it would surely have been in amongst our top picks for 2017!