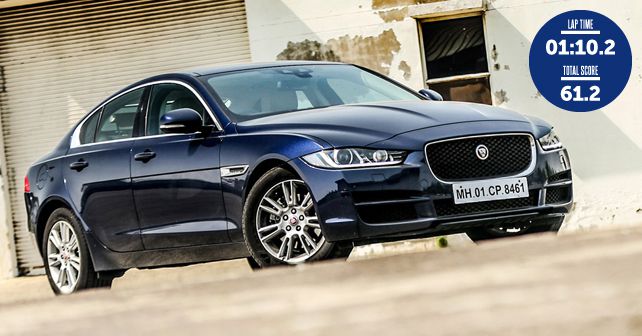 When we drove the petrol-powered Jaguar XE, at our ‘Best of’ shootout last year, we thought it was just the machine that someone looking for a driver-focussed sports sedan would have. In fact, the current resurgence at Jaguar has seen them make some of the best driver’s cars in the industry. Someone even remarked during this test that the current range of Jaguar sedans appear to have the driving dynamics that BMW was once famous for.

The XE that you see here is fitted with Jaguar’s renowned 2.0-litre Ingenium diesel motor. At 177bhp, the XE diesel churns out 11bhp less than its rivals – the Audi A4 and BMW 3 Series – but it’s by no means slow. In fact, from the 39 cars that we had on test this year, the XE not only clocked the fourth fastest time but also proved to be faster than the Skoda Octavia RS and the BMW 530d. Before you scratch your head to figure out how that’s even possible, let me explain. 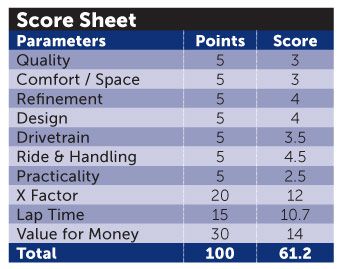 You see, due to work at the track, we could only use the short-loop of the Buddh International Circuit – with just the twisty back section, and minus the long straights. So, the additional horsepower of the Octavia RS and the 530d was nullified somewhat, and the inherent goodness of the Jaguar chassis with its sharp turn-in and quick direction changes helped the XE post an extremely impressive lap time. The steering has a lot of feel, and the chassis is always willing to rotate and resort to grin-inducing oversteer – as a result of which the XE is very much a proper driver’s car.

The trouble with the XE, though, is that it’s quite singular in that focus and provides very little space for the occupants of the back seat. Moreover, for a car that costs north of Rs. 40 lakh, some of the hard plastics in the cabin just aren’t good enough.

But if it’s a Jaguar you want, and one that’ll put a smile on the driver’s face every time, look no further than the XE.