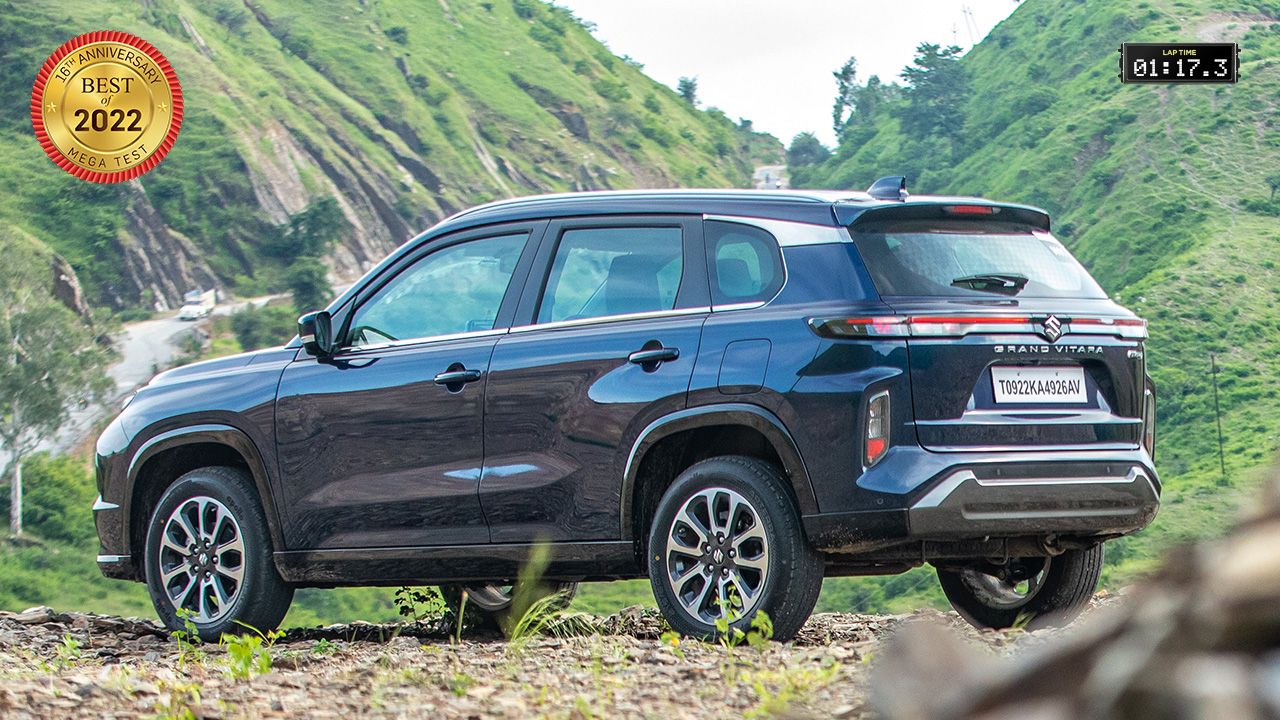 Even before it arrived, we knew the Maruti Suzuki Grand Vitara would be a strong contender for the Best of 2022. It’s loaded with fresh technology and has a new approach to a segment that is fiercely competitive. In short, it’s Maruti Suzuki playing on its strengths, flexing its engineering muscles, and coming out strong.

The Grand Vitara is available in two distinct flavours. First is the mild-hybrid variant, which uses the same 1.5-litre four-cylinder petrol engine as that of the Brezza, with the same 101bhp and 137Nm. It can be had with a 6-speed torque converter AT or a five-speed manual, which also gets the option of AWD. Maruti bringing AWD in a segment controlled by FWD SUVs? I’m on my feet and clapping!

Then there’s the strong-hybrid variant, which is what we tested. It uses a (different) 1.5-litre three-cylinder engine, running on the efficient Atkinson cycle, along with with an e-motor and battery setup to put out a total of 113bhp. Not a very impressive figure, is it? What is impressive is the efficiency you get out of it. Maruti claims 27.97km/l, which translates to a real-world figure of over 20km/l without much effort. The reason is simple – it can run on pure electricity for short distances and under low-load situations, which saves many precious litres of petrol. The e-motor also offers instant torque, resulting in a surge that is very noticeable at city speeds. Once you get on the highway, you will realise that this powertrain is geared toward efficiency and not performance.

This also means that it’s pretty underwhelming on the track. The eCVT makes the 1.5-litre sound strained – it definitely needs an extra 20 to 25bhp (from both engine options) – and the transition from EV to ICE isn’t the smoothest. That said, even though the Grand Vitara has no sporty credentials, which is alright for what is essentially an urban SUV, it handles quite well. Even the steering wheel has a nice heft to it, along with good returnability.

The ride quality of the Grand Vitara is one of its strong points – it soaks up imperfections well, and while the strong hybrid has a firm edge to it primarily due to its weight, it’s still one of the better riding SUVs in its segment.

The Grand Vitara, however, loses some points in terms of space, owing to the fact that its batteries take up a significant amount of the boot space. Even the quality just isn’t up to the mark – most of the switchgear is lifted from lesser Maruti cars, and you won’t find your money’s worth in terms of that premium feel if you’ve splurged on the top-end variant.

That said, the seats are comfortable, and the class-leading efficiency of the strong hybrid and the capability of the mild hybrid with AWD can’t be ignored. Plus, it packs all the right features – wireless CarPlay / Android Auto, a massive panoramic sunroof, ventilated seats, and connected car tech, to name a few. Plus, you get the peace of mind that comes with owning a Maruti Suzuki. The Grand Vitara isn’t perfect, but it does come close to it, which is why it’s one of the Best of 2022.