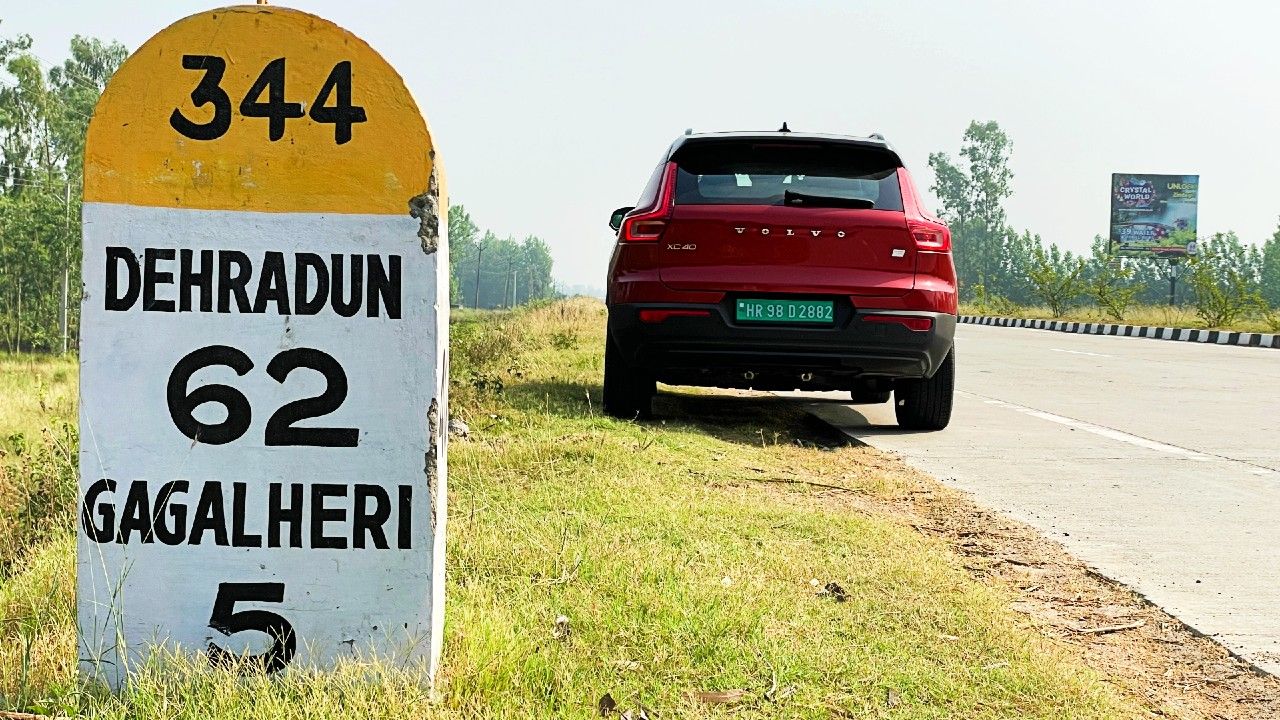 We take the Volvo XC40 Recharge on an 800km journey to put EV road trip myths to rest.

It seems that Electric vehicles indeed are the future of mobility, but what if you own one today and want to use it for more than just intra-city commutes? I took the Volvo XC40 Recharge to Uttarakhand to find out just how easy (or difficult) it is to go for a road trip in an EV in India. Over two days, I covered over 800km through a mix of wide highways, twisty mountain roads, and narrow streets of small towns and learnt a lot about using an EV for a road trip.

When I left Gurugram early in the morning, the car's battery was 91% full, and the integrated Google Maps on the XC40’s infotainment screen showed I would be left with 30% of the range after reaching Dehradun – a distance of about 280km. The highway to Dehradun is fairly popular, which has, thankfully, led to the installation of multiple EV charging stations on the way. 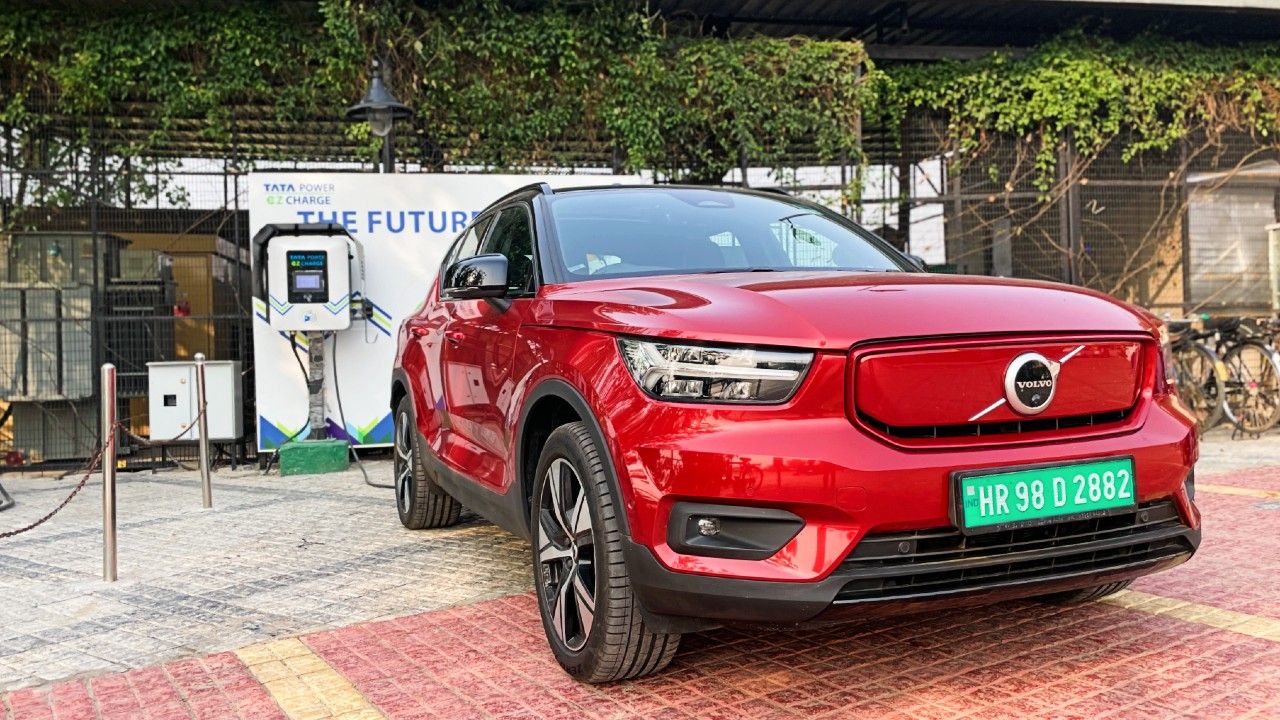 I made my first charging stop at Fun and Food Carnival in Khatauli – the battery had 54% juice left – which has a 30kW and a 7.5kW Tata Power charger installed, along with a 50kW charger by Statiq, but more on that later because it wasn’t functional at the time. I plugged into the 30kW charger and got the car charging with almost no hassle. In the meanwhile, I went inside for a cup of coffee and to catch up on some work. I was on my way again with 65% juice in the battery. Now, Google Maps showed that I would reach Dehradun with a healthy 30% juice still left in the battery.

Once in Dehradun, I docked at a 50kW Tata Power charger outside the MG showroom. There was initially some trouble with getting the charger to work, but I got it started in about 10 minutes. It took about an hour and a half and Rs 900 to go from 30% to 91%. 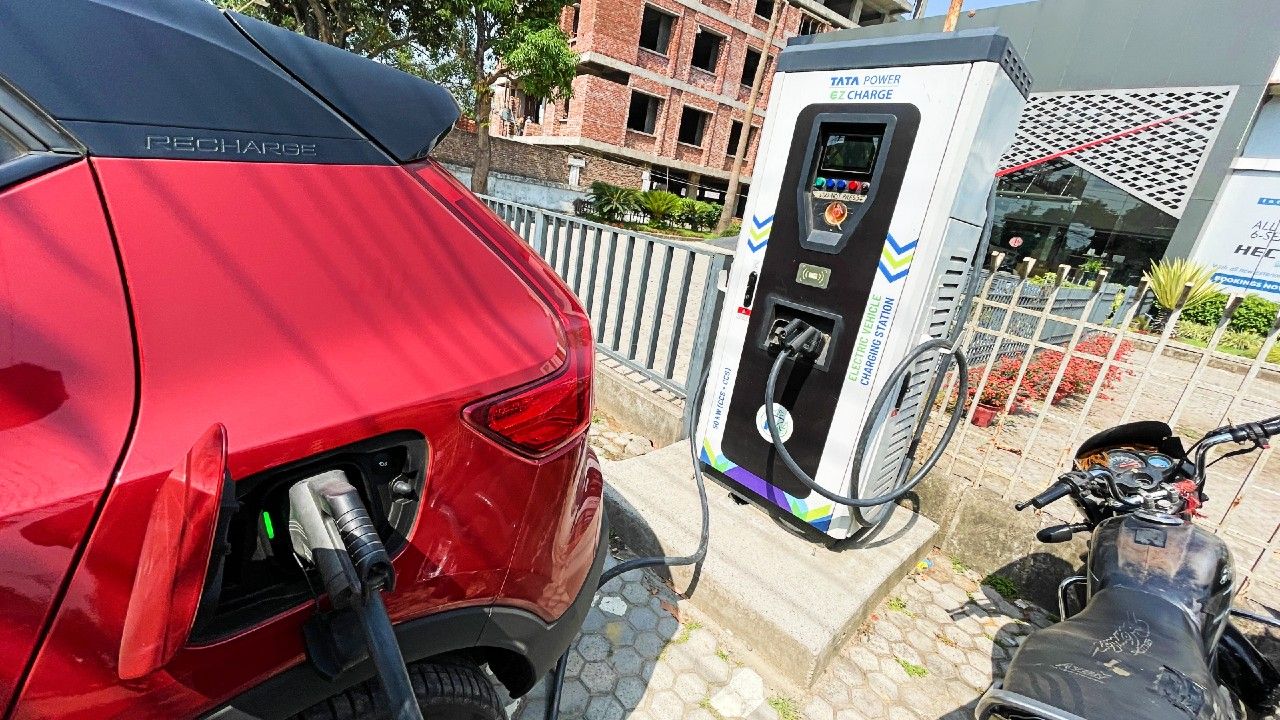 From Dehradun, I headed further past Mussoorie towards Tehri Dam. The XC40 Recharge isn’t the most entertaining car on twisty sections of the road, especially without the added engagement of downshifting for a corner and the noise from the engine, but its turn of speed is so intoxicating that nothing else really matters. You reach corners in the blink of an eye and at a much higher speed than you expect. It takes a bit to recalibrate your driving style to the XC40’s pace. 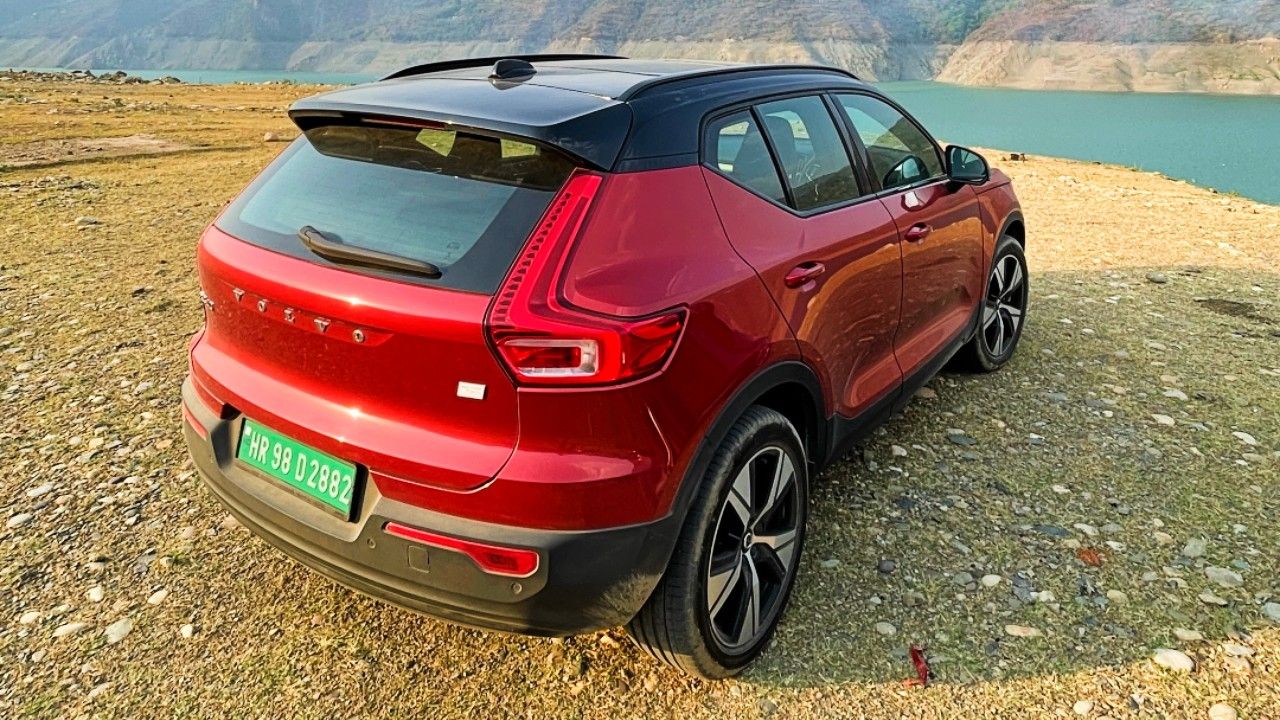 While the car’s performance in the hills is good, its range takes a beating on uphill sections. The predicted range fell from 330km to 220km as soon as the climb started, and while you can use the regen function while going downhill, the way to Tehri is mostly uphill, and I wasn’t driving slowly.

After reaching Tehri, which was also my overnight stop, I did a bit of driving around in the evening. The next day, I had about 45% of the battery left and an indicated range of 170km. It wasn’t much trouble because the nearest charger on the way back was at a distance of just 97km.

Ah, but it couldn’t all be smooth sailing now, could it? After some sightseeing in Tehri, the Maps showed I would reach my charging stop, One Earth hotel, just before the town of Haridwar, with 20% of juice left in the battery. I didn’t drive too cautiously on the way, but I wasn’t reckless either. I reached the hotel with exactly 20% of the battery left. I plugged into the 30kW Tata Power charger – and nope, the Volvo refused to charge.

An error message on the dash and a red light on the charging port persisted, irrespective of the number of times I tried. I managed to contact the technician who had installed the charger there, and he suggested that I restart the charger, which I did, with the help of the hotel staff, but the error message continued. Whoops! 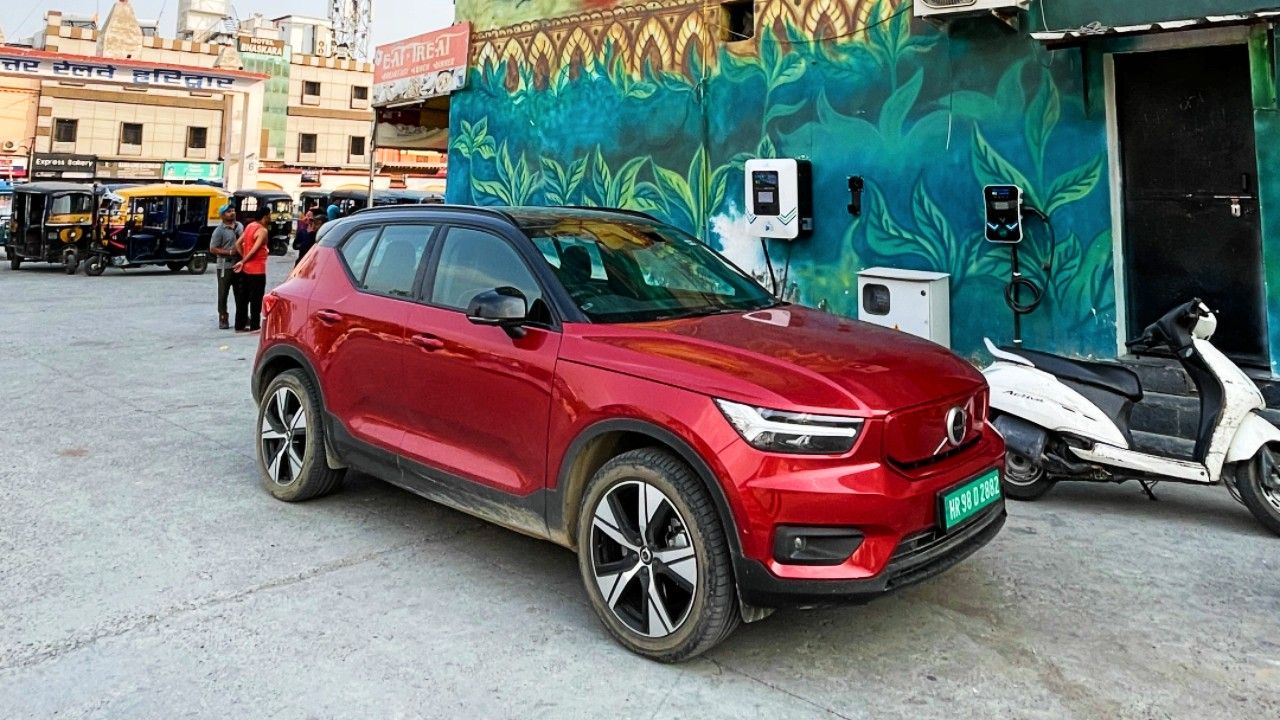 I found another charger about 6km away at Le Roi hotels in the city – once again a 30kW Tata Power charger, and once again the same error. At this point, I was worried – there was no way I could make the 250km journey back home on 19% battery, and if the Tata Power woes continued, I’d be stranded!

Thankfully, with some help from onlookers and some good ol’ unplugging and replugging, I got the charger to work. There is definitely some compatibility issue between the Volvo XC40 Recharge and the Tata Power chargers, but I finally had some mental peace. To avoid any risks up ahead, I charged for almost two hours until the car was at 91%, before heading towards Gurugram.

On the way back, I stopped at the same food court in Khatauli. This time, the Statiq charger was online, so I decided to try it out. The app experience was impressive – it was bug-free and smoother than the Tata Power EZ Charge app, and there was no trouble getting the Volvo to charge too. The charging speed touched 49kW, and the display showed that it was gaining over 200km of range an hour! 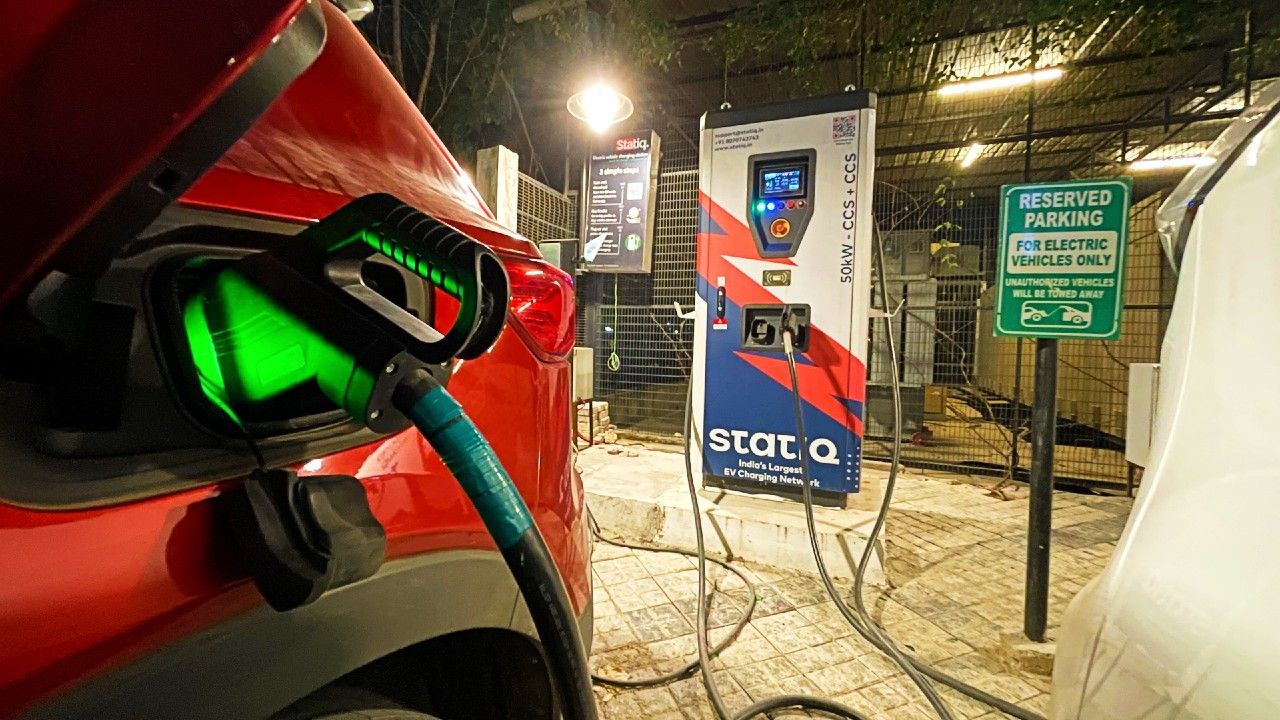 With over 85% battery and not too far to go, I was back on my way home. My mind now free from range anxiety, I began to appreciate just how good the Volvo is as a road trip companion. The sound system is great, the ride is comfortable, and there is very little wind and road noise inside the cabin. A surprising highlight is the wipers – they have integrated water nozzles, which means that even when cleaning the windscreen while driving, your vision is never impeded by a spray of water. The immense power and torque of the car make overtaking a breeze, and it is very easy to cruise at a speed of 120km/h in the XC40 Recharge. It offers a range of about 350km, with mixed driving and mixed road conditions, which is quite good. 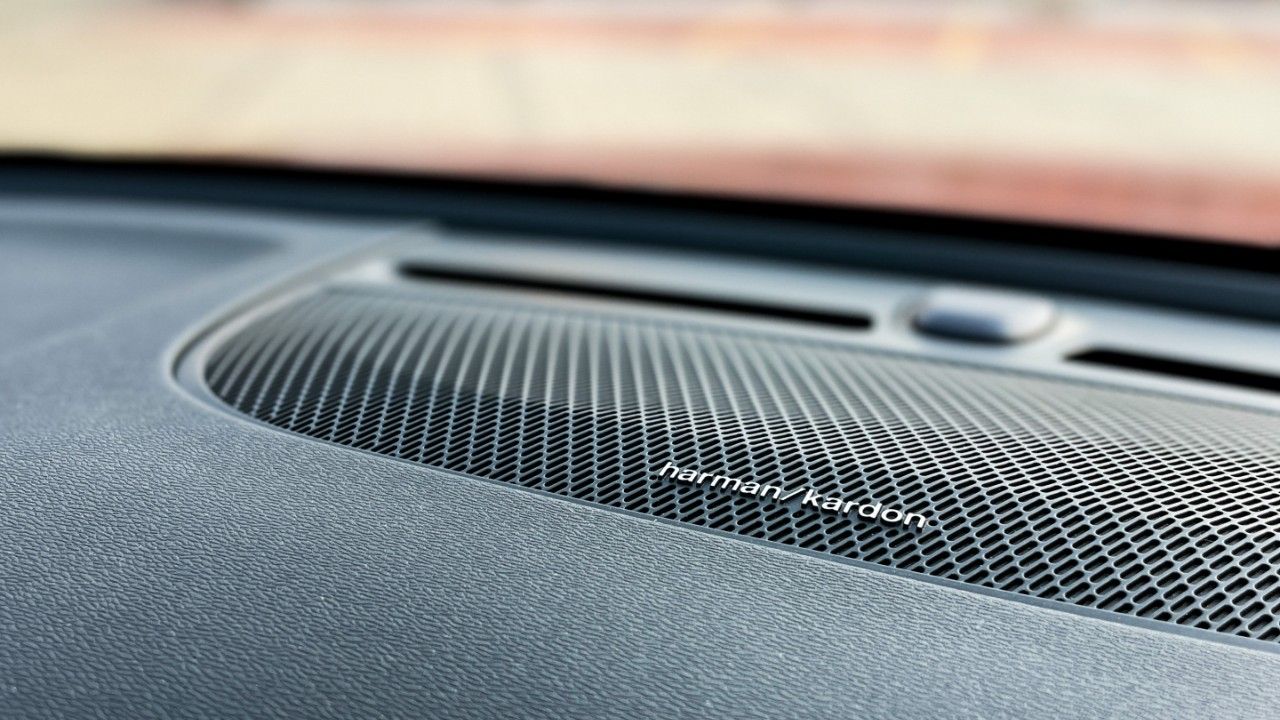 I reached home fairly late, thanks to the charging troubles, with 32% charge still left in the battery. But despite all that, I would say that yes, it is definitely possible to go for a road trip in an EV, even with the current (pun intended) infrastructure. But you will have to plan your destination carefully, based on the number of chargers there are on the way, which means that your destination options would be rather limited. I would suggest choosing a city or a town with a charging station. Additionally, starting your journey with 100% charge makes a big difference in battling range anxiety, for it gives you more options regarding your charging stops on the way. 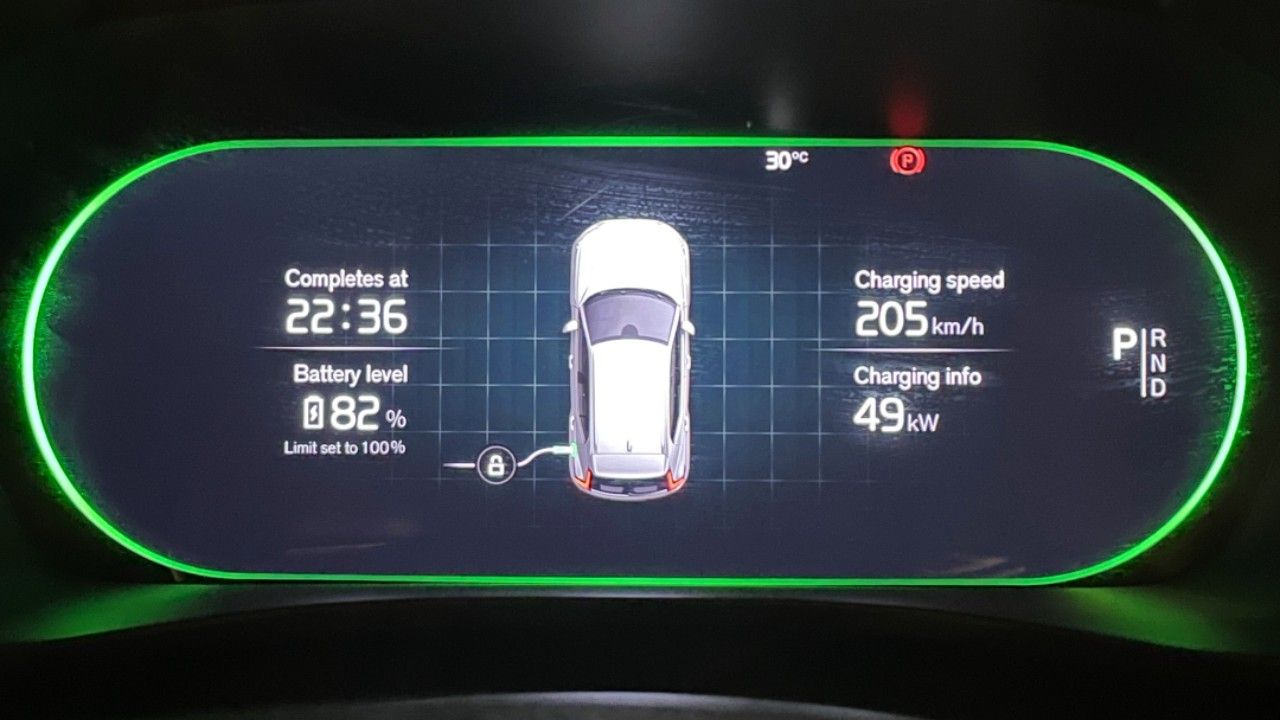 A final word of advice – don’t plan your route around a single charger. Make sure there are multiple options of at least 30kW fast chargers, preferably, of different companies, in case some of them fail to work. Oh, and if you’re travelling alone, carry some munchies and make sure to have some movies to entertain yourself while your vehicle is charging.

In total, I spent close to Rs 2700 on electricity for over 800km in mixed driving conditions. Now, if we consider the initial 91% charge the car had before I started the journey, the total cost would amount to about Rs 3500. The same road trip in a petrol-powered car, which returns 15km/l, would cost approximately Rs 5,600 in fuel bills. That said, charging your vehicle also costs you about an hour or two of your time.