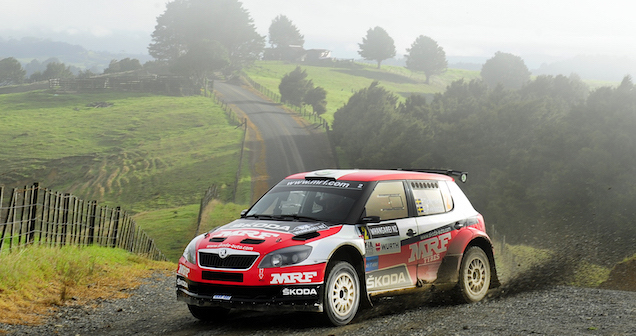 The 2015 FIA Asia-Pacific Rally Championship (APRC) got underway in New Zealand with India’s Gaurav Gill finishing in a well deserved second place at Rally of Whangarei.

The 2013 APRC title winner was always within touching distance of MRF Skoda teammate and the 2013 FIA Junior World Rally Championship title winner Pontus Tidemand but couldn’t overhaul the 24-year-old Swede to defend his win at the event from a year ago owing to problems with his Fabia S2000's differential that essentially left him with a three-wheel drive car and made it seem as if he would end up finishing third or lower.

The 33-year-old from Delhi eventually finished around 6 minutes behind Tidemand and was able overhaul Mike Young to finish second overall along with taking a win on stage 14.

“We had a great battle with Mike [Young] at the end," Gill was quoted after the rally. “He drove really well considering it was his first time around in the four-wheel-drive car, and of course the New Zealand roads are a real pleasure to drive on.”

“We had some dramas but we got it sorted today and I was up to speed. Although in the last stage I was a little nervous because we had a lot of rain and I had no clue whether he [Young] had some rain or not, so I pushed a little harder," he added.

The next round of the APRC - Rallye de Nouvelle-Calédonie - takes place from May 14-15 and Gill has a strong record there, with two wins to his name.