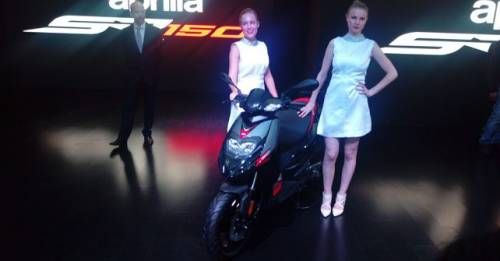 The Piaggio Group put up a massive display at the 2016 Auto Expo with a display of motorcycles and scooters from its Aprilia, Vespa, Moto Guzzi and of course Piaggio brands. Taking centre stage was the unveiling of the Aprilia SR150 scooter which will be its latest offering for the Indian market. The Aprilia SR150 may very well be styled like a scooter, but its origins from an off-road motorcycle are clearly visible.

Other showcases from Aprilia at the Auto Expo include 2016 avatar of the RSV4 superbike that dominated the FIM Superstock Cup in 2015. For 2016, the motorcycle gets a different Superpole graphic, an improved rear suspension and standard equipment will now include the V4-MP multimedia platform. The Tuono V4 1100 which is the latest evolution of Aprilia’s sport naked range was also showcased.

From Moto Guzzi we say the V9 Roamer alongside the Audace and Eldorado.

Piaggio showcased a range of high wheel scooters in the form of the Medley and Liberty. The Piaggio Fly scooter, zero emissions Wi-Bike and MP3 three wheeled scooter was also showcased.

The Vespa stand had the 946 Armani edition scooter that was jointly created with Giorgio Armani to mark the Armani’s 40th anniversary and 130th birthday of the Piaggio Group. Alongside were the Vespa 70, GTS 300 and Vespa 150cc range.