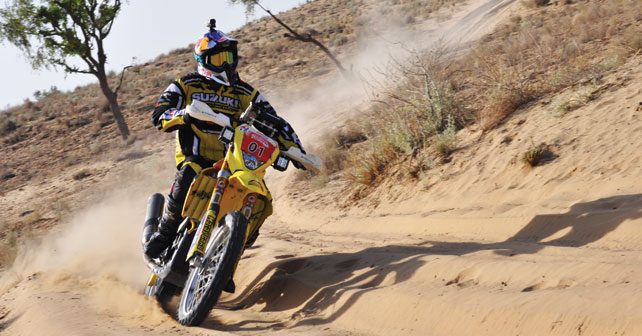 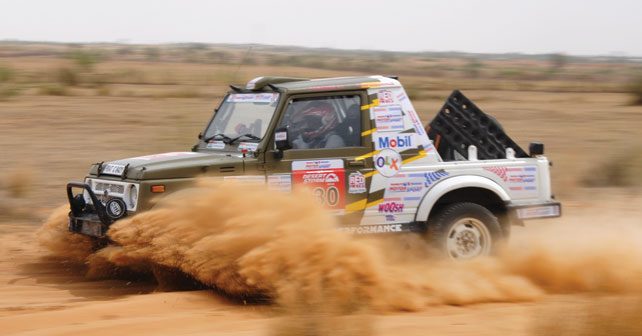 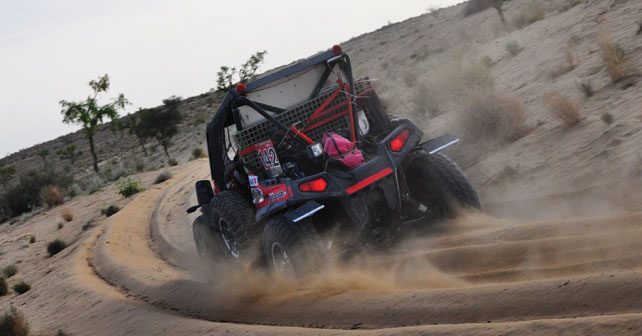 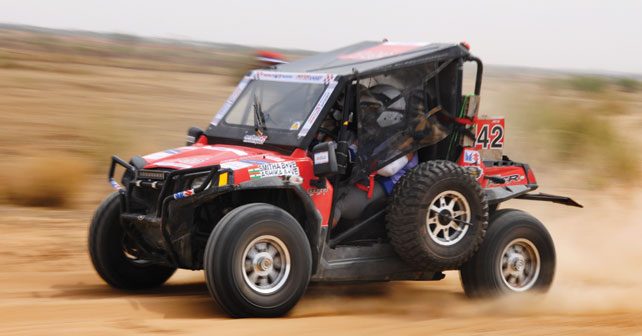 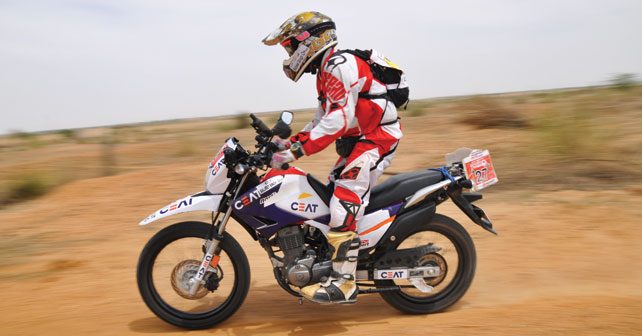 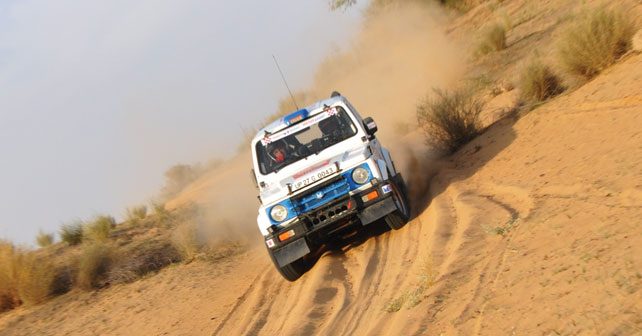 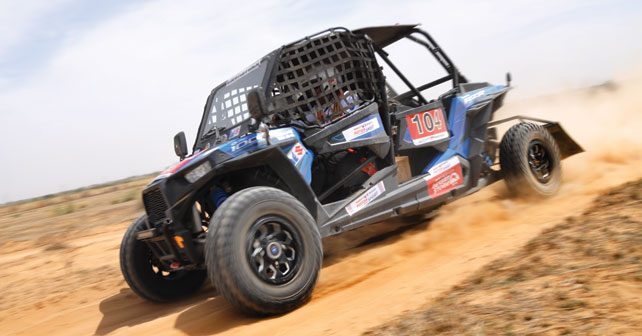 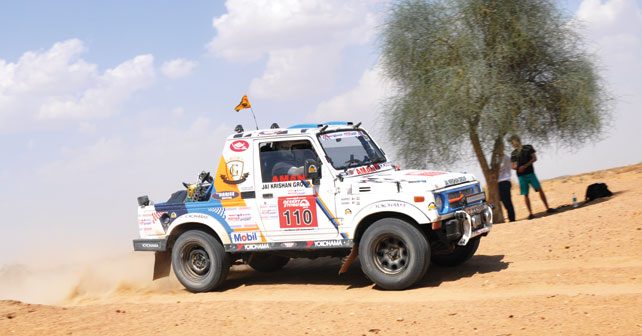 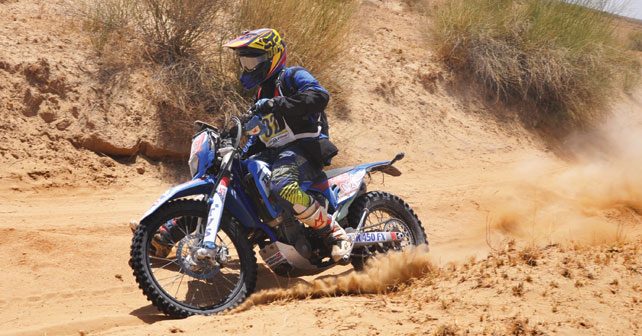 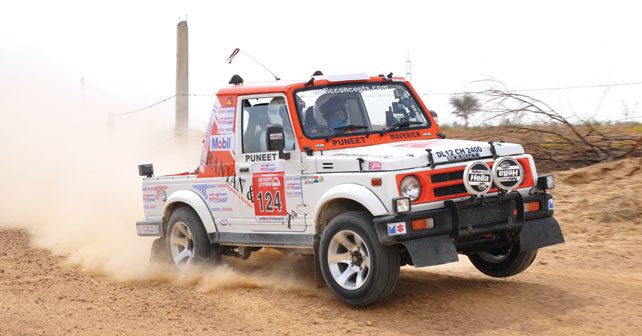 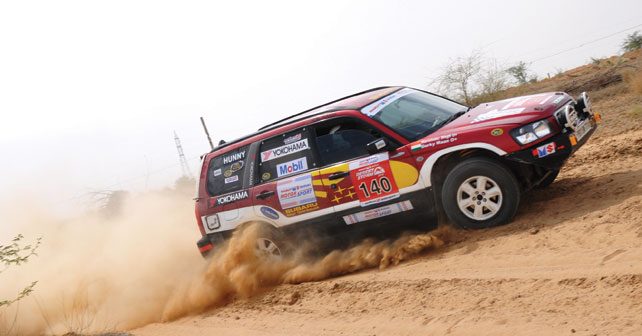 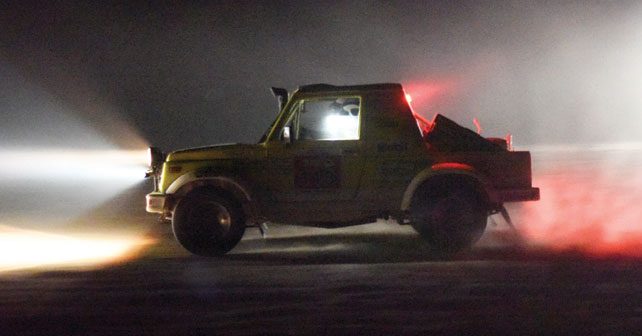 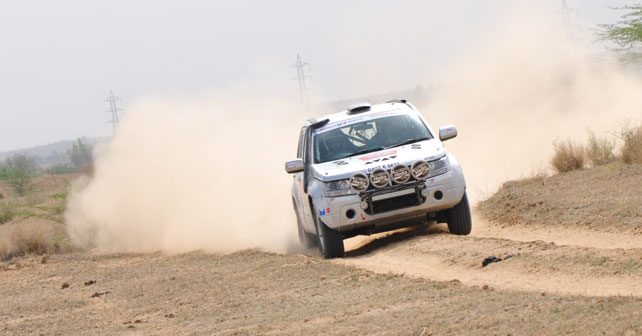 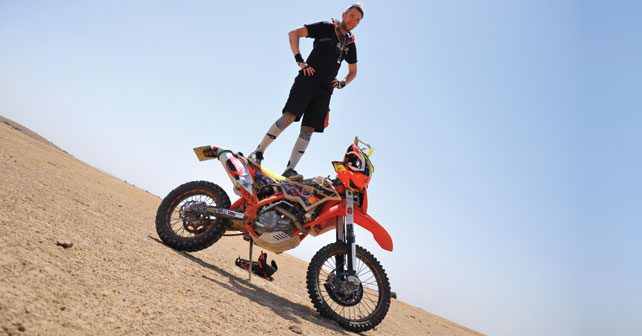 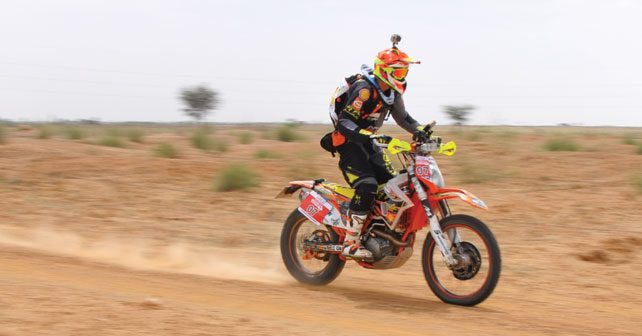 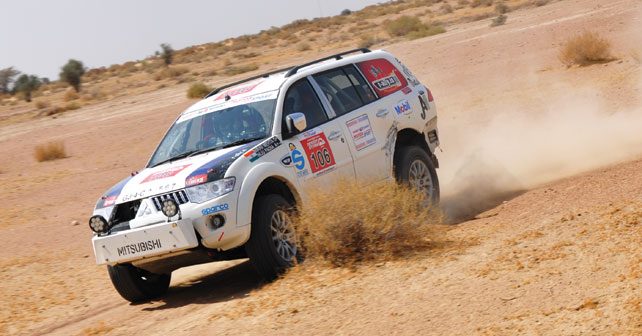 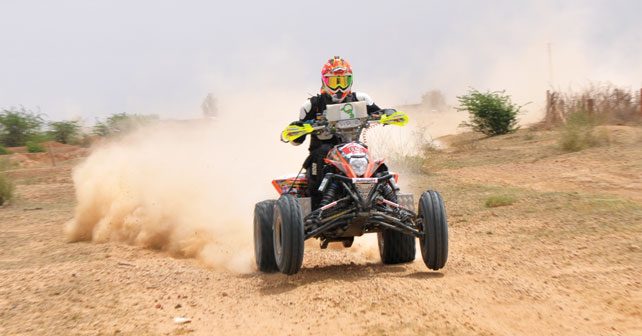 Out of 106 who dared, one man stood out from the rest, and it wasn’t because of his bight yellow jersey. CS Santosh claimed his third Desert Storm as ‘practice’ for the Dakar Rally.

On my visit to Rajasthan, in the midst of all the drivers and riders, who were lining up to take on the Desert Storm rally, there was a different atmosphere from all the rallies that I had witnessed before this one. This time it was a special one for me personally, because of one particular man who goes by the name of CS Santosh.

It was not only a privilege, but an honour to witness the only Indian to have been deemed worthy to ride at the grandest stage of them all – Dakar. CS Santosh is the only man from India to have entered, and completed, this fearsome rally – and that too on his very first outing. While the Bangalorean prepares for his third visit to conquer the (now) South American rally with smaller rallies like Desert Storm, it gives normal mortals like us a chance to witness him in action.

Northern Motorsport had lined up 800 kilometres of special stages that they believed would test each zealous adrenaline junkie (read: participant) to their limit, and humble them. And, during every kilometre of the 11 stages, Santosh showed why he was invited to the Dakar and finished 36th overall in 2015.

Out of 11 stages, spread over six days and nights, Santosh clocked fastest times in eight of them. By the end, he held a lead of a little over an hour over his closest competitor, Aravind KP. Santosh had so much speed that professional photographers, with camera kits worth more than some of the competition machines, struggled to get a decent picture of him riding. Some of us had to mentally and physically prepare ourselves for his arrival, which came and went in a matter of mere seconds.

Yet, a small mistake almost cost him the entire rally. On the morning stage of Leg 5, Santosh forgot to stamp his time card at a checkpoint, which awarded him with a time penalty of an hour. But keeping his composure through the night, Santosh managed to crawl back seven valuable minutes over a chasing Aravind KP, who felt he was within a shot to win. It’s these seven minutes that separated these two riders going into the final leg. With SS13 cancelled, a disappointed Santosh, couldn’t afford to make any mistakes on the final stage. All that stood in his way was 41 kilometres of sandy farmland. With fierce determination, Santosh flew through the stage to victory as Arvind KP made a small mistake and sealed the deal.

The Moto category podium was classified with CS Santosh taking his third win in a row, 9 minutes ahead of Aravind KP, in second place for TVS Racing. The 3rd place trophy also went to TVS Racing’s second rider, R Nataraj, after he won a well fought battle with Jes David for the final spot on the podium.

Also in the Moto category was a four-man team representing Team Austria. They included the father-son duo of Kurt and Rene Steinhart, and Robert Hirt riding modified KTM Enduro R bikes, along with Markus Posendorfer – a differently-abled competitor who was riding a KTM Quad that was heavily modified for him. Unfortunately, Hirt met with an accident on Leg 2 and injured himself, while Posendorfer suffered issues – first with fuel, and then electrical – that led him to retire from multiple stages. But the Austrian didn’t give up. At the start of most legs, Posendorfer went like stink – until his quad would invariably let him down. It was only the Steinhart father and son duo who managed to see the chequered flag, while Hirt and Posendorfer retired from the rally early on. Rene Steinhart finished seventh overall. His father, Kurt Steinhart, managed 15th overall in the Moto class.

In the Xtreme category, all eyes were on Team Maruti and Team Polaris. Lhakpa Tsering, with navigator Venu Ramesh Kumar, the current Raid De Himalaya champions, were the ones expected to be only major threat to the Maruti Suzuki Grand Vitara’s of Abhishek Mishra / P.V. Srinivas Murthy and Suresh Rana / Ashwin Naik.

On Leg 1, Lhakpa / Venu’s Polaris RZR XP4 1000 suffered from a faulty fuel pump and lost a lot of time on SS1. For SS2, the pump was fixed at the allotted service time and the duo were able to gain back some valuable time. On Leg 2, however, everything went south for Lhakpa and Venu as their Polaris caught fire for reasons still unconfirmed and the vehicle was engulfed in flames – leaving only a flaming carcass at the end. Fortunately, both Lhakpa and Venu were unharmed.

Defending Desert Storm champion, Abhishek Mishra, took an early lead over Suresh Rana and both Vitara’s were gaining time with each stage over Amanpreet Ahluwalia / Virender Kashyap in the Gypsy. Before heading into Leg 5, Mishra and Rana had a comfortable lead of around an hour over Ahluwalia.

But, on SS9, as Rana put more pressure on Mishra, the leading Vitara made a small error at high speed – which cost him big. At a speed of around 150km/h, Mishra’s car flipped and barrel rolled multiple times – destroying the SUV.

Rana / Naik and Ahluwalia / Kashyap showed great sportsmanship by stopping mid stage and helping the duo escape from the wreckage before continuing the rally. As last reported, both driver and navigator were recovering from their injuries – Mishra was reportedly suffering from a concussion, while Murthy experienced a dislocated shoulder.

After the unfortunate incident, Rana had a clear lead. The Manali Man added another ten minutes to his already substantial lead in the remaining three stages to finish with a comfortable 70 minute lead. Ahluwalia / Kashyap finished 2nd in the Maruti Suzuki Gypsy. Thus, the Overall Team Trophy went to Team Maruti.

The team of Niju Padia / Nirav Mehta, in their Mitsubishi Pajero Sport, fought till the very end with Ahluwalia / Kashyap. Despite taking on some damage on the car during the course of the rally, Padia / Mehta took the 2nd runner-up spot in the Xtreme category while also claiming the T2 over-1350cc category win.

Rana / Naik also claimed the T1 over-1850cc category victory for Team Maruti. Ahluwalia / Kashyap took the T1 below-1350cc category win over the No. 07 Team Army car that was classified as the first runner up in the category.

And while the competition was intense on the sands of Rajasthan, there was a bit of a hollow feeling afterwards because of rallying veteran Raj Singh Rathore being banned for two years by the Federation of Motor Sports Clubs of India (FMSCI) council due to the fact that the Polaris RZR Turbo in which he won the 2015 Raid de Himalaya was found not to have been officially registered by the Regional Transportation Office. Rathore was stripped off his Raid title as well. There were some rumours of Polaris taking Rathore to the Dakar rally eventually, but with the ban in place that plan has been put on hold till at least 2017. Amber Udasi, who was Rathore’s navigator, didn’t suffer the same fate and was hired by Polaris for the event on contract – and not as an official team member. Currently, Rathore can only participate in the Rain Forest Challenge, as it’s not officially governed by the FMSCI. Whether Rathore will formally contest this unjustified decision remains to be seen.