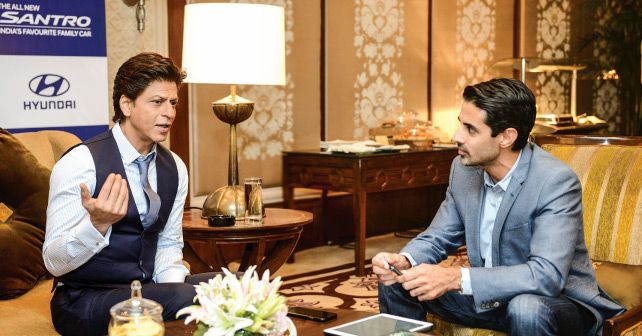 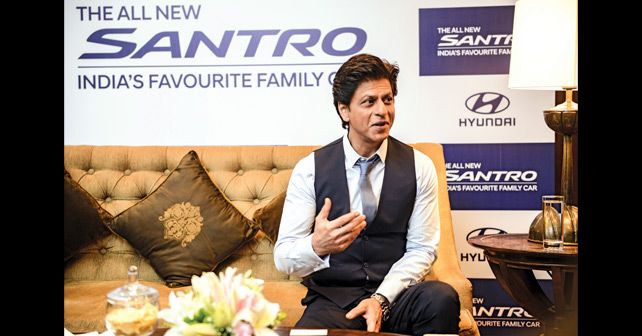 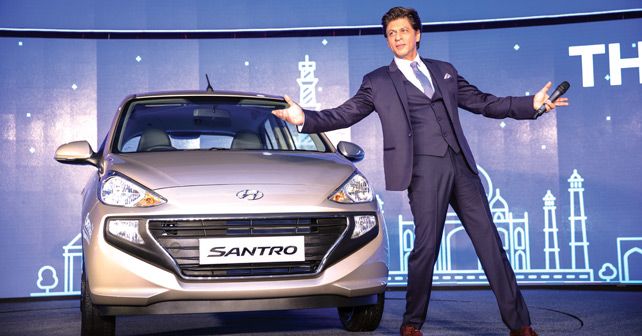 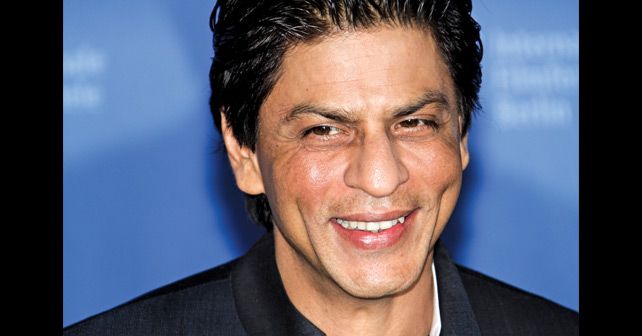 Dhruv sits down with none other than SRK to talk cars in general, the Santro in particular, and what still drives him after 27 years in Bollywood.

Star power doesn’t get much bigger than this, but what comes across more than anything else when you sit down with Shah Rukh Khan is his humility. Here’s an excerpt of a chat that covered cars, racing, road safety and his ability to connect with everyone around him.

You’ve been associated with Hyundai for 20 years. In that time, both yourself and the Santro have become household names. What’s the secret sauce in this relationship?

See Dhruv, I won’t really compare here. I just feel that when you genuinely go out to do something good, whenever you make a film or introduce a product, unless it’s going to touch or change lives for the better, in the smallest way possible, there’s no point doing it. Though I may not be able to pinpoint the exact thing, the Santro must have brought something with it – perhaps the ‘tall boy’ design, a spacious cabin, safety features such as airbags, or whatever, but I think that Hyundai must have given the Santro something that made people connect with it and inevitably the car changed their lives. I also, if I may be presumptuous enough to say so, somewhere in the 27 years, must have brought something that touched people’s lives. Or at least I’d like to believe I have. I normally say that I work so that people can smile watching my work, and there are very many times when I do find people smiling – and sometimes I also find them not smiling at all! But, in the end, it’s the small things that sometimes matter the most. I always ask, ‘Can we change lives with this film?’ I don’t mean a drastic or radical difference, because, let’s face it, nobody’s life changes completely through a film or a book, or a car for that matter. But, yes, simply touching an aspect of someone’s life and making them feel good about it, or even bad about it at times, is the secret sauce.

When we met previously at the Chennai plant, you seemed to connect with everyone present, right from the management to the workers on the factory floor. Is that a skill that you’ve had to work on or are you naturally a people’s person?

I’m a very shy and reticent person. So-much-so that most of the time, I don’t have more than four people of my team with me. However, the work that I’ve done has made me realise that there is a connection with people who I never really get to see or meet. And the connection is certainly not about the sense that, ‘Oh, you’ve made me a big star, I owe it to you.’ It’s just that I can feel that connect from people and I’m glad that everyone, irrespective of how serious they might appear to be, has always smiled at me and been very kind to me. And it can’t be because of me per se, because they don’t know the ‘real’ me. My family knows me, my team knows me, but they don’t. Despite that, I see that look in their eyes, so I feel that there must have been a connection with those people because of which I’ve lasted this long. That’s why I just feel like connecting with people.

You mentioned that you’re not a car enthusiast per se, but do you enjoy getting behind the wheel every now and then?

I used to love driving, to be honest! So-much-so that, until five or six years ago, during my drives back from the studio, and even long-distance drives, I used to drive myself. Also, till the time my kids were young and here in India, about once a week, I used to take them for short drives around the city – on the Sea Link perhaps. Sadly, due to the traffic condition in Mumbai now, you can’t really go for pleasure drives anymore. However, when I’m shooting in the countryside abroad, I do use the opportunity to drive because I still enjoy doing so.

You mentioned that safety is a big priority for you. Do you think that Bollywood, because it has so much influence, and considering the fact that India has the worst road safety record in the world, could do more in terms of spreading the message about better road behaviour?

Well, Bollywood can do a lot of things and, likewise, people expect Bollywood to do a lot. However, I’ve noticed that, just through the use of social media, many Bollywood folks do go out of their way to spread awareness. Most recently, I saw a video of Anushka Sharma reprimanding a person for throwing litter out of a car window. I’ve seen a couple of other such incidents as well. I think it’s based on personal belief. I do tell people around me to stay safe. I won’t praise the fraternity stating that all of us are exceptional in this aspect, but I feel that most of the boys and girls in the film industry today do believe in the concept of safety. It’s fortunate that Bollywood is one of the two industries largely responsible for entertainment in the country, and, in my opinion, all of us are doing quite a bit on a personal level. And since celebrities are always in the limelight, they get picked on quite quickly even if they overlook something. So, by default, everyone is careful.

Going back decades, we’ve seen Hollywood films like Bullitt where both Steve McQueen and the Ford Mustang were stars of the film. How come we don’t see that kind of relationship in more Bollywood films?

Well, Don actually drives a Hyundai. In fact, in the first Don film, they even allowed us to remove the ‘H’ and put in a ‘D’ instead. So, one does it. But we’re not film oriented in that way – where we take a James Bond or Mission Impossible and use the aspirational aspects of a product and put them across in a film to make it look really cool. I do agree that, in this respect, Hollywood has been a little ahead of us. I think Bollywood is still trying to figure out how to use the human aspect of storytelling more, before moving on to the material aspect.

What’s the secret behind your motivation? What is it that still drives you?

The other day I was telling my daughter that, more often than not, if you’re a public figure, if you’re in a profession that exalts you and puts you on a pedestal at times, that profession also puts numerous eyeballs on you – questioning you. What I do is that I ignore most of it, but ignoring it doesn’t mean that you’re  not aware of it. You’re aware of it, and then you ignore it. But, every question asked to me – be it professional or personal – I’m aware of. And every time it’s negative, I take that energy and turn it around. At times, people tell me that why should it matter to you – let people say what they want? But it does matter to me. I remember Sachin said a very nice thing once, he said that when people are throwing bricks or stones at you, it’s up to you to get hurt by it or build a wall, or a staircase to rise above it. And that’s what inspires me. The smallest of aspects which are challenged, I accept it and I want to overcome it. Also, I don’t want to say, ‘See, I did it.’ it’s a personal thing, I do it not to prove it to anyone else, but to prove it to me. I want to be able to say to myself that I did good.