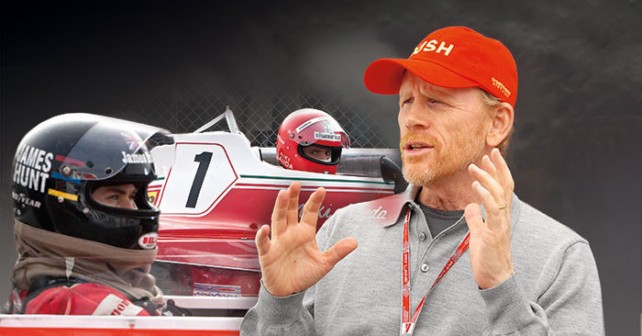 In an exclusive interview, director Ron Howard reveals the secrets behind ‘Rush,’ a movie on the epic rivalry between the two F1 drivers who fought for the 1976 World Championship. In theaters this September.

Ricky Cunningham is all grown up. The skinny, red-headed, and slightly naïve kid from Happy Days,  the cult TV show for countless generations (11 seasons, 255 episodes, to this day the go-to-show for those who deal in TV show scheduling), has become a director capable of transforming any story into a blockbuster. Ron Howard has created astronauts in space (Apollo 13, Oscars for editing and sound), mathematicians obsessed with their personal demons (A Beautiful Mind, Oscars for best film, directing, and screenwriting, and best actress in a non-starting role: Jennifer Connelly), university professors grappling with the mysteries of history (Angels and Demons and The Da Vinci Code, both inspired by Dan Brown’s books) and journalists (The Paper and Frost/Nixon, 5 oscar nominations). He’s now decided to have a go at Formula 1, and he’s done it by narrating an event that, despite being slightly covered up by the dust of time, still contains formidable human content and spectacle. We’re talking about the rivalry between Nikki Lauda and James Hunt, which culminated in the 1976 World Championship. Rush is the name of the film, and it hits theatres in September. But we were able to get an exclusive interview with the director – who explained to us this unexpected choice for an artist whose dabbled in the auto world only once before with the half-forgotten 1986 film Gung Ho.

Does the decision to dedicate a year of your life to the races conceal a hidden passion for racing?
I would like to say so, but the truth is that I’ve never been a fan – neither of Formula 1, nor of cars in general. I’ve never bought an expensive car. Even now I cruise through L.A. in an electric Fiat 500. Once I went to a track day in Silverstone just to live the emotion of racing on a track, but it was horrible. So I have to admit that my only experience with the races is limited to the slot cars of my childhood.

So, then, why exactly did you choose this particular story?
Because I tell stories. This one was suggested to me by my friend George Lucas, and it was enthralling because of both the unique characters and the thrilling drama of motorsports. When I started working with screenwriter Peter Morgan, we immediately understood that there was the opportunity to make a film that was fresh and different. He’s exceptional in unearthing these surprising conflicts in personal relationships, and the fact that Lauda and Hunt were so different allowed us to work on their profiles in an original way. I also simply like to explore challenges between professionals, whether they be firemen, journalists or boxers. I mean, when I did Apollo 13 I knew nothing about astronauts.

Speaking of the Lauda-Hunt duel, who do you feel closer to?
I am not a competitive person like Niki, but I definitely feel closer to him because we are both calm and methodical. During the shooting I had many chances to speak to the Austrian driver, he told me that he never once believed that he’d been born with the gift for driving – but that, with time and consistency, he developed a disposition for it. Hunt, on the other hand, was all adrenaline and he expressed himself through it.

What was Lauda’s role in the creation of Rush?
He didn’t want any formal say in it. He did read the screenplay, partly because Morgan and I needed the testimony of at least one of the protagonists in order to delineate certain particulars, which later, due to script necessities, needed to be simplified to better fit with the plot. Obviously, he gave us permission to use his story and his name, but he never intruded or made demands about the film in any way. He showed a lot of respect for our work.

From the trailer, it seems that besides the human aspects the film is extremely spectacular and realistic. How did you reconstruct everything?
I love saying that the viewer should get the impression of having entered a time machine. So, we tried to be meticulous about the historical details. Many scenes were shot at Brands Hatch, and on the old Nurburgring with cars provided to us by collectors. We also assembled replicas of the vehicles. For the most difficult scenes, we relied on computer graphics – but those were very rare.

Generally speaking, films on racing have never really turned out to be hits.
No doubt, even if John Frankenheimer’s Grand Prix and Lee Katzin’s Le Mans were not all that bad. Maybe the problem is that those works were focused exclusively on the races. With Rush I wanted to analyze the human aspect of the characters, mixing humour with the drama of sports.

Lastly, is your film on fear or courage?
Good question. Thinking about it, the main theme is ambition. The level of ambition that’s necessary to overcome fear. Rush also tries to answer a simple, but terrifying question – what pushes a man to flirt so much with death? 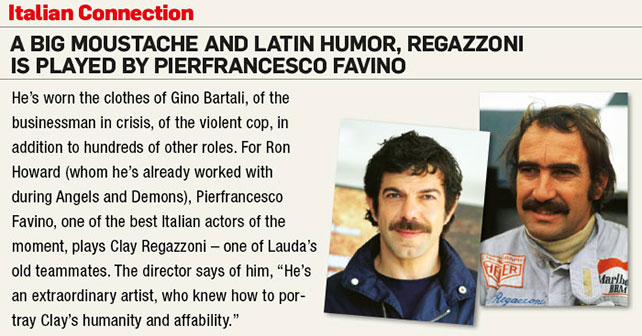 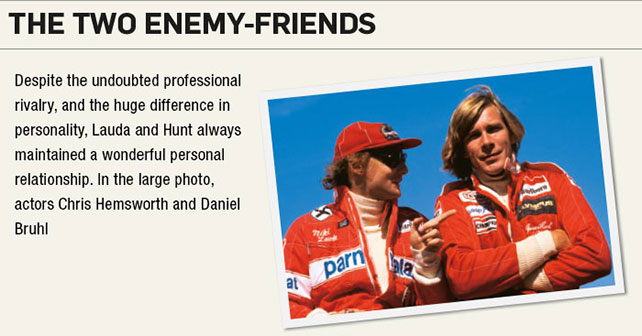 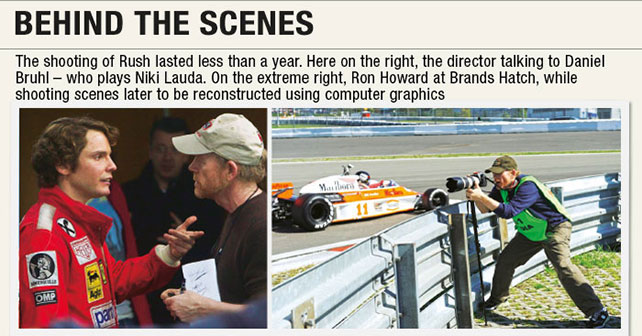 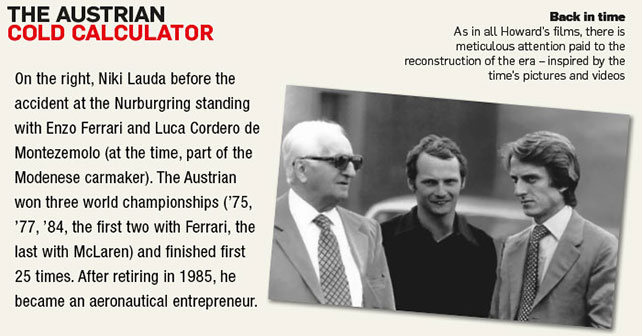 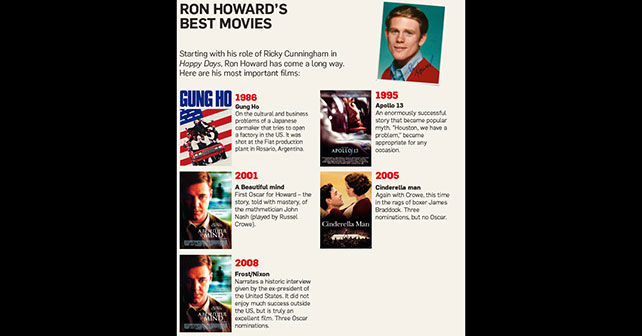