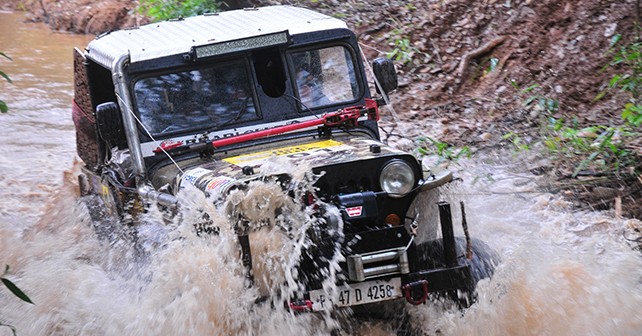 While this year's inaugural edition of the Rainforest Challenge India pleased participants and onlookers alike, the feeling of contentment was tempered by the fact that there are bigger fish to fry, so to speak. Not only is next year's event scheduled to get tougher but the top three finishers of this year's event are set to participate in the 'mother' event - the one that started it all in 1997 - in Malaysia on November 29; including Chandigarh's Kabir Waraich.

Waraich led the charge for the popular off-road group Gerrari Offroaders; who took third, fourth and fifth place behind the factory backed Force Motors team in this year's Rainforest Challenge India in Goa.

The third place finishers means that Waraich and co-driver Gurmit Virdi (Gagan Sachdeva had co-driven for Waraich in Goa but will be unable to make it to Malaysia) will gain automatic entry to the main Rainforest Challenge event.

Gaining entry for the event is one thing, however, getting ready for it is quite another. And the way Waraich sees it, there is one big obstacle for his chances of a good showing in Malaysia as well as next year's event in India; fitness.

"When you look at the top two guys Tang (Eng Joo) and Mervyn (Lim) and their co-drivers it is pretty obvious what the biggest difference is between them and the rest of us," Waraich told autoX. "They are in pretty good physical condition while most of us are pretty soft around the middle!

"You could even see in the high-lift jack pull test on the prologue days of the event how those guys tackled it successfully while the rest of us were all huffing and puffing. That fitness also became apparent on the stages in the forest where they were moving much faster and more efficiently."

Fitness aside, Waraich believes there is little to separate him from Joo and Lim as well as other participants aside from some equipment like specialized boots with spikes to help move around freely in the muddy and slushy conditions.

Even the car he will be driving at the event will not be too much of an issue in Waraich's mind. "We have managed to arrange for someone in Malaysia to prepare a Dihatsu Rocky for us to use in the event," said Waraich. "The preparations have not been easy for us, but we have gotten a fair amount of assistance from Ashish Gupta and Cougar Motorsport who of course put together such a fantastic event in Goa."

Waraich's debut at the Rainforest Challenge event in Malaysia is eagerly anticipated by off road enthusiasts in India who are hoping to also use the Indian event as a platform to make a foray into multiple off-road events around the world and participate more as professionals than just adventurous enthusiasts.