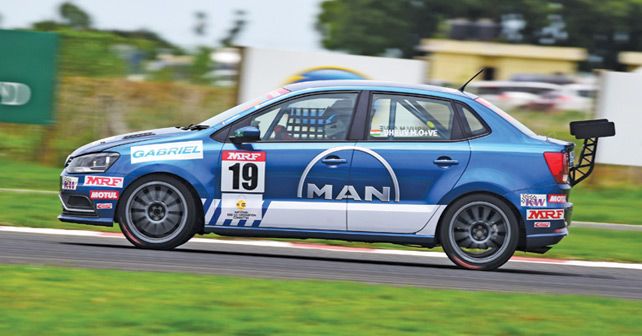 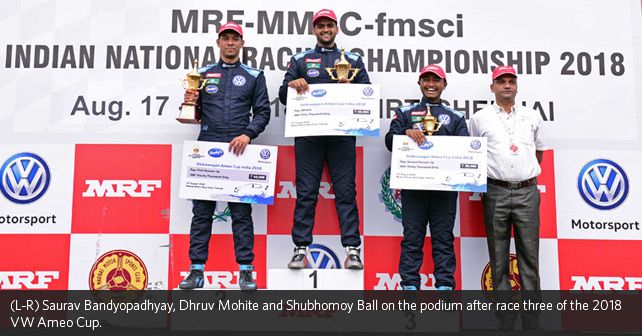 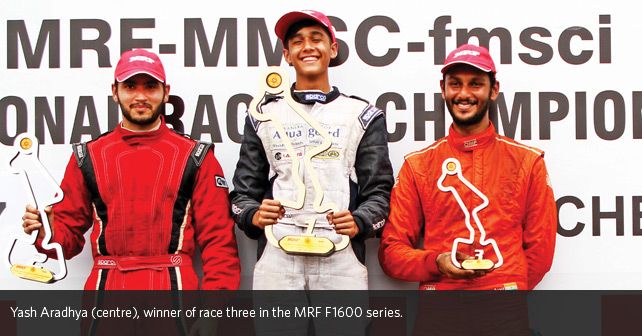 Securing two comfortable wins in round three of the 2018 Volkswagen Ameo Cup, Dhruv Mohite heads into the final round with a 60-point lead.

The Madras Motor Race Track played host to round three of the Volkswagen Ameo Cup and round four of MRF F1600. Despite variable weather conditions and plenty of incidents, the racers remained unperturbed and managed to put their best foot forward.

In the Ameo Cup, Dhruv Mohite bolstered his championship lead after registering a win in two races in the penultimate round. Starting race one from pole position, Mohite took home an unchallenged victory. Behind him, Saurav Bandyopadhyay fought hard to finish second, while Jeet Jhabakh clinched the final position on the podium.

Guest driver Ameya Dandekar started the reverse-grid race two from pole, but it was rookie driver Shubhomoy Ball who took everyone by surprise, as he took the top spot. Meanwhile, Mohite managed to secure the final spot on the podium, while Jhabakh had to settle for fourth. Starting from pole, Mohite once again dominated the final race of the weekend, taking his fifth win of the season.

The first race of the MRF F1600 series was won by Raghul Rangasamy, who finished nearly three seconds ahead of local boy Sandeep Kumar. The second-place battle between Kumar and Nirmal Uma Shanker was won by the former, while Shanker had to settle for third. Seventeen-year-old Yash Aradhya from Bengaluru marked his first season in MRF F1600 with a maiden win in the third race. Goutam Parekh trailed him, securing second place, while Rangasamy finished a close third.

What’s interesting is that Aradhya, who has previously participated in the JK Tyre Euro JK series, is also a competitor in MRF 1600. This is certainly a welcome change, as earlier racers were discouraged from participating in two competing racing series by the two stalwart tyre manufacturers. As racing regulations in India seem to be easing out in favour of talent and skill development, racers now have better opportunities to hone their skills on various racing platforms available in the country.