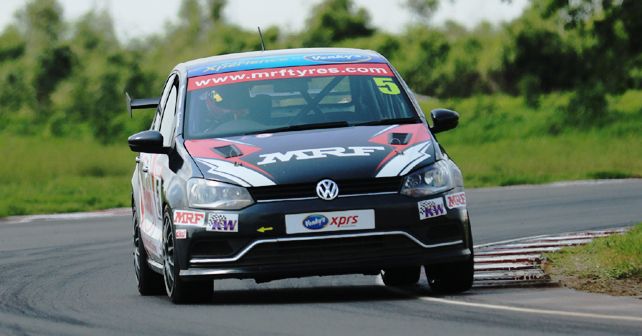 The final day & round of the 2019 MRF Indian National Car Racing Championship (INCRC), which took place at the Madras Motor Race Track (MMRT) in Chennai, could not have witnessed a more cut-throat level of competition, especially in the debut season of the Ameo Class (Volkswagen Championship). The final two races of the Ameo Class (Race #10 & #11 of the season) had been reserved for the final day of the 2019 championship. To give the readers a brief recap of the proceedings of Day 1, Mumbai's Saurav Bandyopadhyay (#4) finished Race 1 in P3. However, as the two drivers who classified ahead of him were both guest drivers from Volkswagen Motorsport South Africa (Jeff Kruger & Tasmin Pepper), they did not qualify for championship and thus, Bandyopadhyay was handed 52 points (50 points for 1st place & +2 for the fastest lap of the race).

Day two began with the Race 2 grid set up in the conventional reverse-grid order (applicable to the top 12 finishers of Race 1). This meant that local hero Harsh Sheth (#15) was on pole, while Bandyopadhyay, Pepper (#21) & Kruger (#22) found themselves on the 10th, 11th & 12th grid positions, respectively. As soon as the race began though, Delhi's Anmol Singh (#6), who started the race from P2, was soon leading the race and would continue to do so till the chequered flag dropped. At the back, the guest drivers made small work of the drivers ahead of them and managed to claim P3 (Pepper) & P4 (Kruger). Jeet Jhabakh (#5) too put up an impressive show, as he started the race from P9 but fought his way up to finish just behind Anmol Singh in P2. Finishing ahead of the more experienced South African guest drivers surely would have been a big boost for Jhabakh.

All the on-track action of Race 2 also translated into some nail-biting off-track action, on the leaderboard. After Race 2, both Jhabakh & Bandyopadhyay were tied for points, sitting on 370 points each (with the N-1 rule in effect). However, as Pune's Pratik Sonawane (#7) ran the fastest lap in Race 2, the two bonus points took him atop the leaderboard to 372. Therefore, heading into the third & final race, each of the top-three contenders was within a hair's breadth of the 2019 Ameo Class title. However, it was Jhabakh who proved his mettle and emerged as the National Champion. For Race 3, guest driver Tasmin Pepper was on pole, while the championship favourites Jhabakh, Saurav & Sonawane started from P7, P4 & P3, respectively. By the end of Lap 2, guest drivers Pepper & Kruger were in a race of their own at the front, and behind them, Sonawane, Saurav & Jhabakh ran in P3, P4 & P5, respectively. It seemed like Sonawane would be successful in defending his position as it would secure his championship victory, but Jhabakh mounted a successful attack in the final few laps and managed to overtake both his rivals. Thus, despite the P3 finish, Jhabakh had scored enough points to win the 2019 title.

In the junior championship category, Bangladesh's Aiman Sadat (#11) converted his debut racing season into a well-deserved junior title victory. Without the N-1 rule, Sadat managed to garner 526 points in the season, which are significantly more than those of his nearest rivals Kaushick Mohan Raja (438) & Viraj Jhala (450).

As part of the winner's deal, Volkswagen Motorsport India will be sending Jeet Jhabakh to South Africa in 2020 to participate in the exchange program with VW Motorsport South Africa.