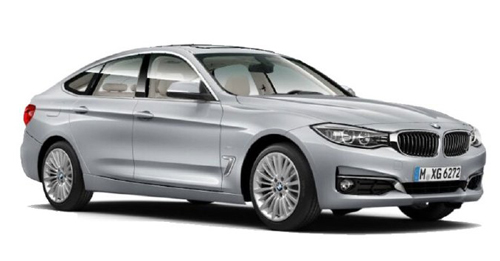 With the 3-Series GT, BMW plugs another gap in its range. It combines the driving characteristics of a 3-Series and the space and practicality of a bigger car. Also, it's based on the 3-Series, but has much more room on the inside, thanks to the raised roofline and longer wheelbase. The BMW 3 Series GT price is not much higher than the regular sedan, and it gets increased ride height as well. What's left to be seen though, is whether customers will take to the lift-back shape or not.

The 3-Series GT is quite an attractive car. From the front, you'll notice that the stylish adaptive full-LED headlamps merge with the large kidney grille. The shapely front bumper looks good with chrome inserts, and the bonnet has a few creases on it, giving it a muscular definition. Alongside the car, there's a solid shoulder line that runs from the front wheel arch to the edges of the tail lights. And the multi-spoke alloys look classy. The sloping roofline towards the rear looks unique, and the re-profiled LED tail lamps light up beautifully.

There are lots of details on the inside that resemble other saloons in the BMW range. The i-Drive screen is a bit small, but it gets BMW's latest iDrive system. There are also nice, big door pockets to store some stuff. The front seats are well bolstered and the driving position, as expected, is spot-on. Fit and finish, and quality of materials are hard to find fault with. The additional bump in BMW 3 Series GT on-road price (over the 3) ensures the occupants sit a little higher than in the saloon, and the huge panoramic sunroof and windows give the cabin a very airy feel. The seats at the rear provide ample thigh support, and headroom and legroom are never a problem, thanks to the longer wheelbase. Boot space has been increased to 500 litres, and the tailgate has an electric closing function.

The BMW 3-Series GT is powered by a 2.0-litre, petrol engine that produces 248bhp and 350Nm of torque, and a 2.0-litre diesel engine that makes 188bhp and 400Nm of torque. Both engines are paired to a ZF 8-speed automatic gearbox. We drove the petrol-engined car of the two. The engine is so refined, you can barely tell if it's working or not at idle. It gets four driving modes: Eco Pro, Comfort, Sport and Sport+. Eco Pro is best used in traffic, while Comfort makes the engine sprightlier without the sacrifice of fuel economy. In Sport and Sport+, the engine and transmission are much more responsive, while the steering gets a bit heavier too. Even the exhaust sounds a bit sporty if you floor the throttle. Thanks to the perfectly tuned springs, the BMW 3 Series GT new model rides over bad roads really well. Handling can't be compared to the 3-Series sedan, but it does feel well controlled around corners.

The BMW 3-Series GT's ARAI-certified fuel efficiency figure is rated at 21.76kmpl for the diesel model and 15.34kpl for the petrol model.

BMW has launched a new Shadow Edition variant of the 3 Series Gran Turismo in M Sport spec to lend a differentiated appeal to the standard version of the car. As its name suggests, the BMW 3 Series....

What is the current on-road price of BMW 3 Series GT?

Currently, the BMW 3 Series GT is priced at Rs. 42.5 Lakh for the base 330i M Sport Shadow Edition trim.

What is the price of the top variant of BMW 3 Series GT?

Which year did BMW introduce the 3 Series GT in India?

What are the top competitors of BMW 3 Series GT?

The BMW 3 Series GT goes up against the Jaguar XE and Volvo S60 in the Indian market.