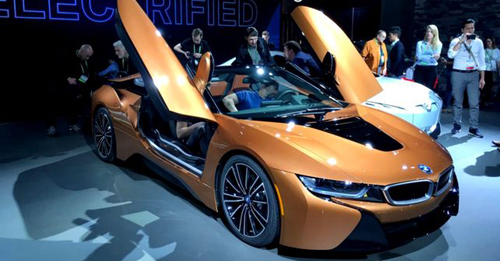 BMW had a huge line-up of upcoming cars on display at the Auto Expo 2018, but the showstopper was undoubtedly the new i8 Roadster. Although this was the first time that the car was showcased in India, it has made its global debut previously at the 2017 Los Angeles Motor Show.

The i8 Roadster shares a lot of features with its coupe sibling. Except for the open top, both the i8 models look essentially identical. The body has been constructed using Carbon Fibre Reinforced Polymer (CFRP) to keep the weight in check. Thanks to that, the i8 Roadster is just 60kgs heavier than the coupe version. If you want to experience the wind in the hair feeling, the roof can be dropped in just 15 seconds at speeds of up to 50kmh/h. To ensure adequate safety, BMW has strengthened the front windscreen frame.

The cabin of the i8 Roadster too is similar to the coupe but there are a few differences unique to the drop-top version. While the rear seat of the coupe version isn’t quite usable, BMW has smartly given it a miss and replaced it with some luggage space. There is also the small rear windscreen for better wind deflection.

The heart of the i8 Roadster is the same as the Coupe – a 1.5-litre three-cylinder petrol motor that develops 228bhp. This engine works in union with an electric motor that adds 143bhp to the i8 Roadster, giving the car a combined output of 371bhp.

At the Auto Expo 2018, BMW announced that they will bring in the i8 Roadster to India this year. Expect the German luxury car maker to launch the car towards the end of the year. While the i8 Roadster doesn’t quite have a direct competitor, in terms of price it will hold its own against the Jaguar F-Type Convertible, Porsche 911 Turbo and the Mercedes-AMG GT Roadster. 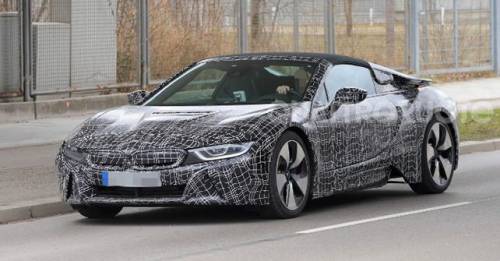 BMW’s electric ‘i’ division have been working on removing the roof of the BMW i8 plug-in hybrid sports car. The convertible will be called the BMW i8 Roadster and will go into production in....