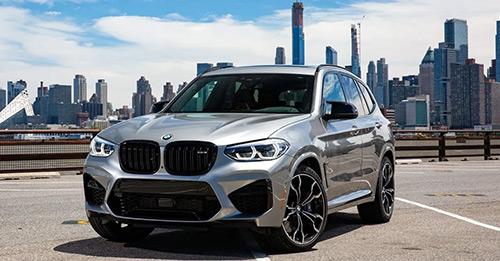 BMW, for the first time, has introduced a high-performance version – straight from the brand’s M division – for the X3 SUV, and, thankfully, it has made its way to the Indian market. It is, of course, largely based on the standard X3, which was first unveiled at the Auto Expo 2018 and is underpinned by the maker’s CLAR platform. The BMW X3 M price, however, is too exorbitant in comparison to its standard derivative. Here’s what it brings to the table.

As is a norm with BMW’s M division models, the X3 M gets a more aggressive design on the outside compared to the standard X3. It now gets 20-inch M light-alloy wheels as standard, however, you can also opt for 21-inch wheels, which, of course, would further spruce up the BMW X3 M on-road price. The SUV now also features black kidney grilles with double slats, aggressively revised bumpers, and a rear spoiler.

The BMW X3 M variants are as follows: Petrol. As for the tech onboard, you get electrically-adjustable sport seats with memory, leather upholstery, ambient lighting, and an M-specific instrument cluster. The X3 M also gets a panoramic sunroof and split-folding rear seats. LED headlights, rain-sensing wipers, anti-dazzle interior and exterior mirrors, a head-up display, park assist, wireless charging, wireless Apple Carplay, and a powered tailgate are also part of the package.

The interior layout and overall styling of the X3 M are largely identical to the standard X3. It does, however, distinguish itself with a number of M-specific changes. It now gets sports seats, which are electrically adjustable, along with ambient lighting, leather upholstery, and, of course, an M-specific instrument cluster.

The BMW X3 M new model comes powered by a 3.0-litre M TwinPower Turbo unit, which is capable of churning out 473bhp and 600Nm of torque. This also happens to be one of the most powerful six-cylinder units in BMW’s M division line-up, as of late-2020. The power is sent to all four wheels via an 8-speed M Steptronic transmission. Lastly, the high-performance SUV clocks the 0-100km/h time in just 4.2 seconds.

This is the first instance that BMW India has launched an M model from the brand's mid-size SAV segment. The X3 M, like all M models, will be brought here as a CBU and is priced at ₹99.90 lakh....

What is the current on-road price of BMW X3 M?

What is the price of the top variant of BMW X3 M?

Which year did BMW introduce the X3 M in India?

What are the top competitors of BMW X3 M?