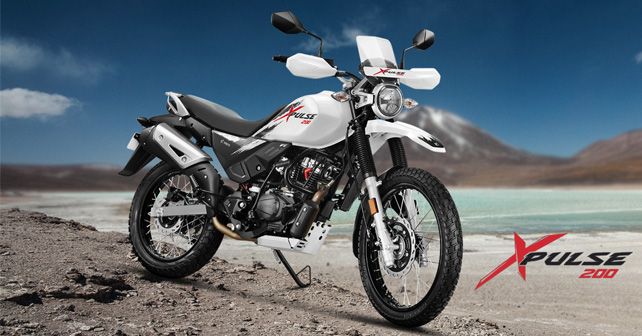 The XPulse 200 BS6 version is powered by the same 199.6cc engine that powers the BS4 trim, but now due to the new emission norms, its power output has dipped from 18.1bhp of the previous model to 17.8bhp.

Hero MotoCorp unveiled the BS6 version of the XPulse 200 at the Hero World Event 2020 in February just after the Auto Expo, but now the world’s largest manufacturer of motorcycles and scooters has revealed the technical specifications of this light adventure motorcycle on its website. Initially, the plan was to launch the bike in March, but due to the Coronavirus outbreak, it will make its official debut once the lockdown's lifted.

The BS6 avatar is powered by the same 199.6cc engine that powered the BS4 version, but now it gets a new oil cooler to control the powerplant’s temperature and, as expected, is available only in the fuel-injected version. Due to the new strict emission norms, the XPulse’s power output has slightly dipped from 18.1bhp to 17.8bhp and the torque figure is now 16.45Nm at 6,500rpm as compared to the previous model’s 17.1Nm at 6,500rpm. Hero MotorCorp has retained the same 5-speed gearbox.

The BS6 XPulse gets a more traditional exhaust design, as the pipe now is underneath the engine, unlike the BS4 version where it ran parallel to the powerplant. Now, the good news here is that according to Hero MotoCorp, this new setup in no way has hampered the XPulse’s ground clearance – it still remains 220mm. In terms of dimensions, it remains identical, but the wheelbase is now a fraction shorter –  it's 1,410mm instead of the earlier 1,412mm. The kerb weight of the motorcycle has also increased slightly from 154kgs to 157kgs.

Apart from the few changes, the BS6 XPulse continues to be based on the same diamond type frame and comes with 37mm front forks with 190mm travel, with a 10-step adjustable mono-shock at the rear. It continues to sport dual-sport tyres with 21-inch 90 section at the front and 18-inch wheel with a 120 section at the rear. The XPulse is also equipped with single-channel ABS and 276mm front disc and 220mm rear disc brakes.

The Xpulse continues to be fairly loaded with features, as it retains the Bluetooth-enabled all-digital instrument cluster with a turn-by-turn navigation system and full LED headlamp.

At the moment Hero MotoCorp hasn’t revealed the price of the new XPulse, but going by the prices of the BS4-compliant XPulse – Rs 99,500 for the carburettor model and Rs 107,500 for the fuel-injected one, the XPulse 200 will continue to be the most affordable adventure motorcycle in the Indian market.

When Xpulse 200 will come to the market