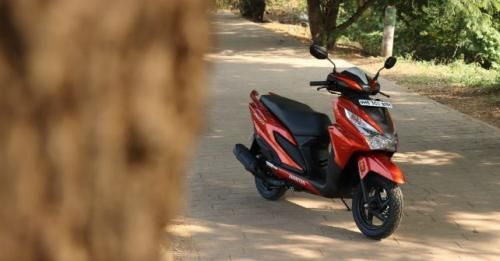 The financial year ending March 2018 has been a good one for Honda Motorcycle and Scooter India (HMSI). Aside from impressive month-on-month sales, they achieved a few great milestones in the year. In December 2017, the company led two-wheeler sales in 15 states across the country. This benchmark was soon followed up with the production of their 35 millionth vehicle – just after 17 years since they set up shop in India. And more recently, the Honda Grazia has registered sales of over 1 lakh units – just after five months into its launch. In fact, the company sold more than 6.1 million units in FY2017-18 and registered a growth of 22 percent.

Despite such great success, it seems that HMSI doesn’t intend to slow down any soon and is aiming for the title of the highest-selling motorcycle manufacturer in India. Taking steps to get closer to the goal, the company will bring in one new product and 18 updates by March 2019. To help achieve this feat, Honda is looking at an investment of Rs. 800 crores. During the official announcement, Honda also mentioned that they will update their entire lineup. Honda has already unveiled updated versions of some of their motorcycles at the Auto Expo 2018, including the Activa 5G, CB Hornet and CBR 250R.

Speaking at the announcement, Minoru Kato President and CEO of HMSI, said, ‘Our record sales have set a solid foundation in 2017-18, and Honda 2wheelers India will further consolidate its position in 2018-19 as we get ready to lead the biggest paradigm shift of 2020. Moving ahead with the same momentum on the back of customer demand, we will invest close to Rs. 800 crores as we aim for double-digit growth for the third consecutive year in a row as well.’

Besides working on their product strategy, the company will also focus its energies on updating their vehicles to comply with the upcoming ABS regulations in 2019 and BS VI emission norms in 2020. In the interim, Honda will also work on further expanding its dealer network. The big H also aims at expanding to 6,000 touch points pan-India and establish a stronger pre-owned two-wheeler business too. Meanwhile, Honda will continue to educate motorists with their Road Safety Campaign.