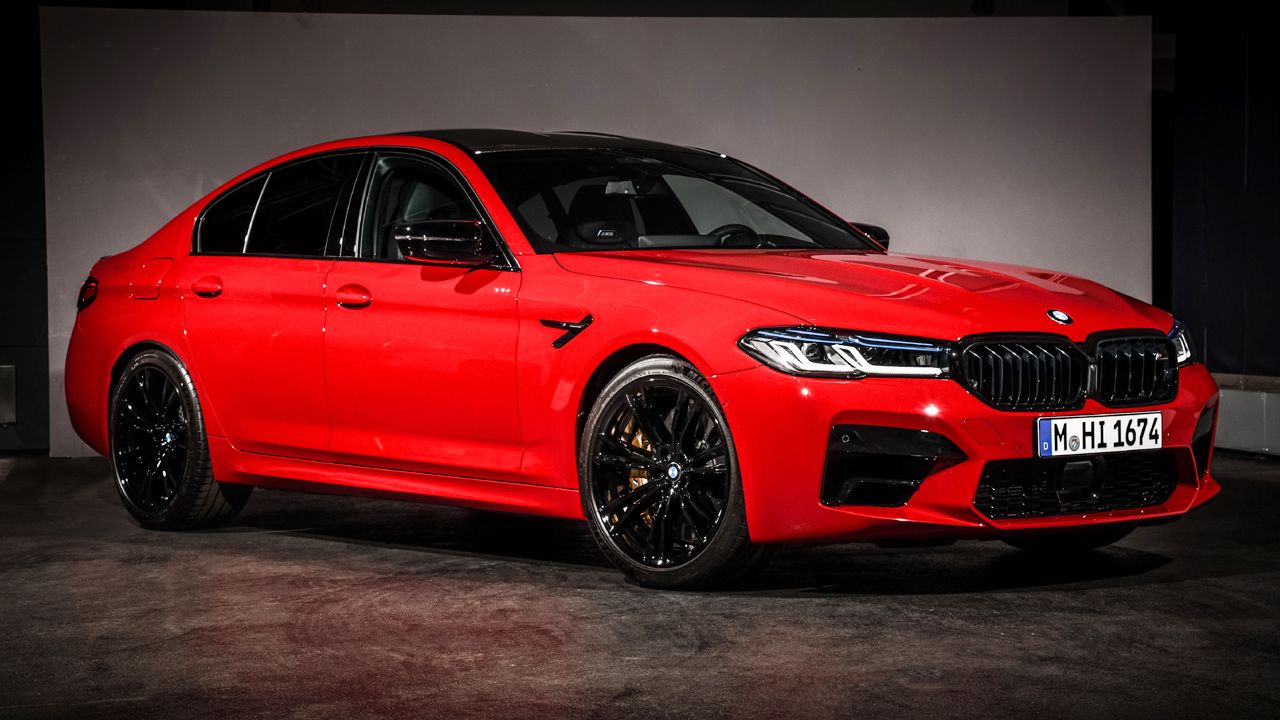 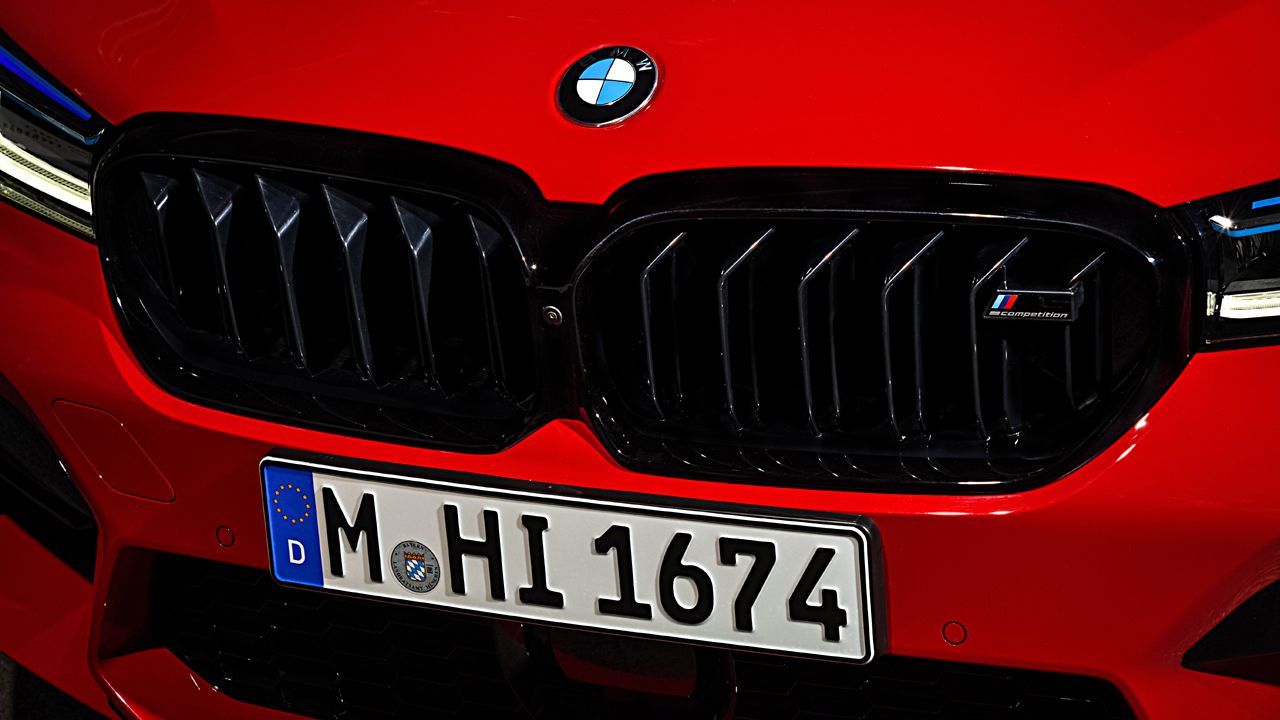 The 2021 BMW M5 & M5 Competition have arrived with refreshed styling, the same 4.4-litre twin-turbo V8, and some new & advanced features.

Around three weeks ago, BMW pulled the wraps off the new 2021 5 Series. So, we knew that the updated M5 wasn't too far away from its global debut either. Today, we get the first look at the 2021 BMW M5 & M5 Competition. Technically though, BMW has only released images of the M5 Competition spec, so you'll need a bit of imagination to visualise the less hardcore M5. As for changes, apart from a few new visual elements and uprated kit, not much has changed about the 2021 M5 & M5 Competition. Straight off the bat, the basic updates applied to the new 5 Series have made their way to the new M5, such as the new Dynamic Laser Beam Matrix LED headlamps with the new L-shaped tube-style LED DRLs. The new Singleframe kidney grille extends further down into the apron and gets the signature M-specific dual-slat design. The bumper design also gets a nip & tuck job, with more aggressive air intakes and a hexagonal centre air dam. 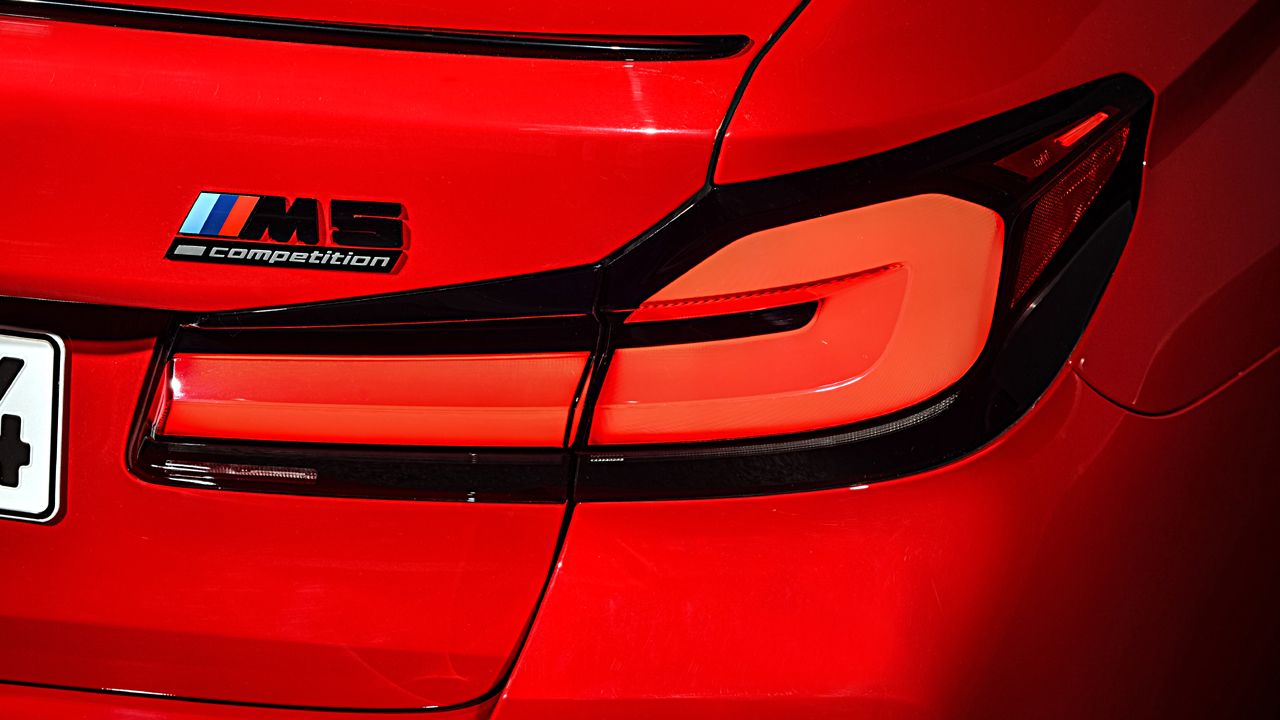 At the back, the new 3D LED taillights are housed in black surround accents for a more pronounced look. The new rear apron integrated into the rear bumper has been carried over from the new 5 Series, although on the M5 & M5 Competition, it gets a revised air splitter and the quad-exhaust tips continue with the circular design instead of the new trapezoidal look. If you opt for the M5 Competition, most of the chrome bits will be replaced by gloss black counterparts, as seen in the image, and a few M5 Competition badges will be added to a couple of body panels. 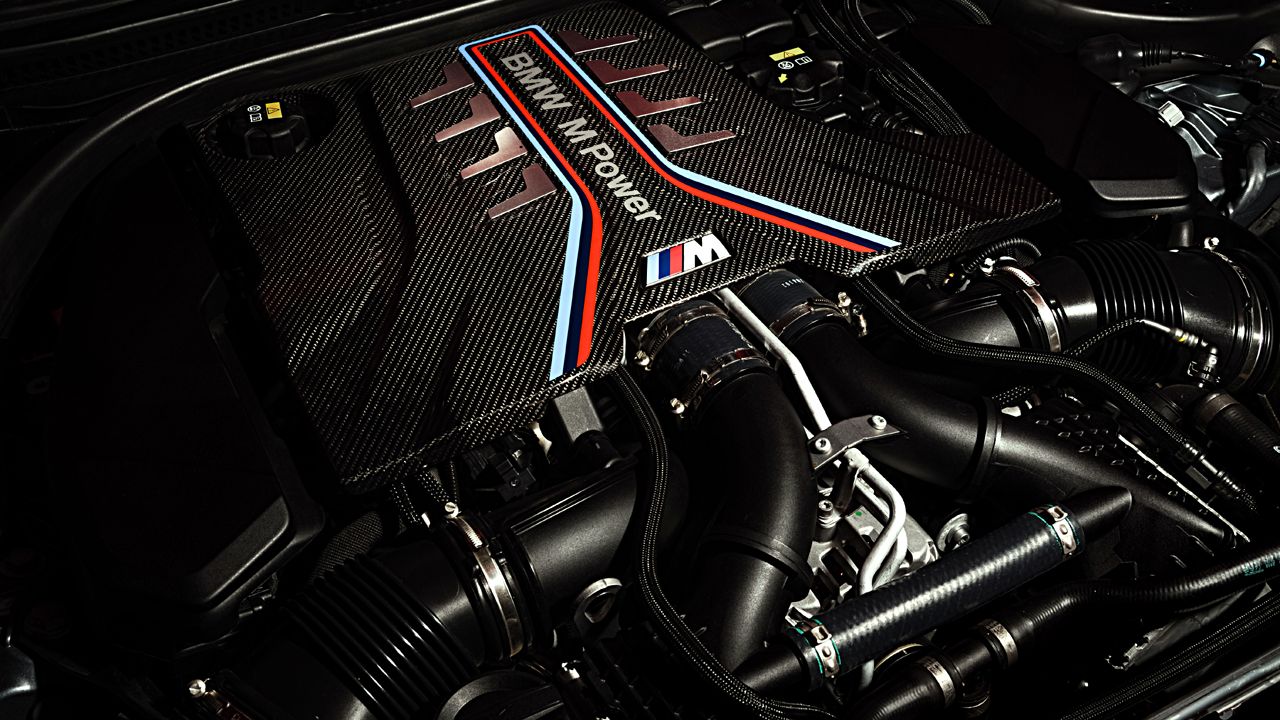 Mechanically, the 2021 BMW M5 & M5 Competition remain largely unchanged, probably since there wasn't much scope of improving the predecessor's gem of a V8 motor. Like before, the 4.4-litre M TwinPower Turbo V8 offers 591bhp & 750Nm of torque in the M5 (0 – 100km/h in 3.4 seconds) and 617bhp/750Nm in the M5 Competition (0 – 100km/h in 3.3 seconds). The eight‑speed M Steptronic transmission with Drivelogic comes as standard, as does the M xDrive All-Wheel-Drive with a '2WD' mode setting for pure rear-wheel drive. The M5 Competition though does get some mechanical tweaks, in the form of a retuned chassis & suspension, new shock absorbers from the BMW M8 Gran Coupé, and a 7mm lower ride height than the M5. 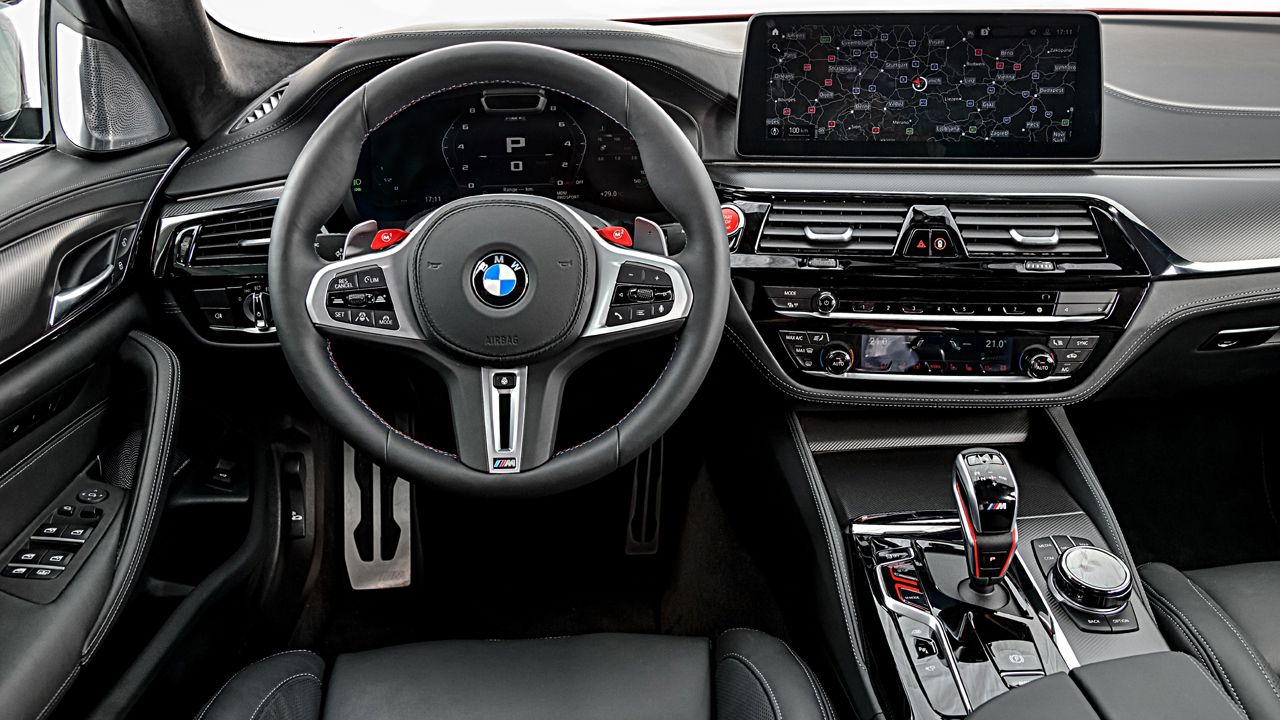 Inside, one of the biggest updates is the addition of BMW Live Cockpit (with BMW OS 7) as standard fitment. Thanks to this, both the central infotainment system & the instrument cluster get 12.3-inch screens. The other new addition is that of the two-button operating concept on the centre console (SETUP/M MODE), again borrowed from the M8. The M MODE button allows you to toggle between ROAD and SPORT modes, while the SETUP button allows you to toggle between Comfort, Sport, and Sport+ drive modes. The M5 Competition, in addition, also gets a fourth Track drive mode. 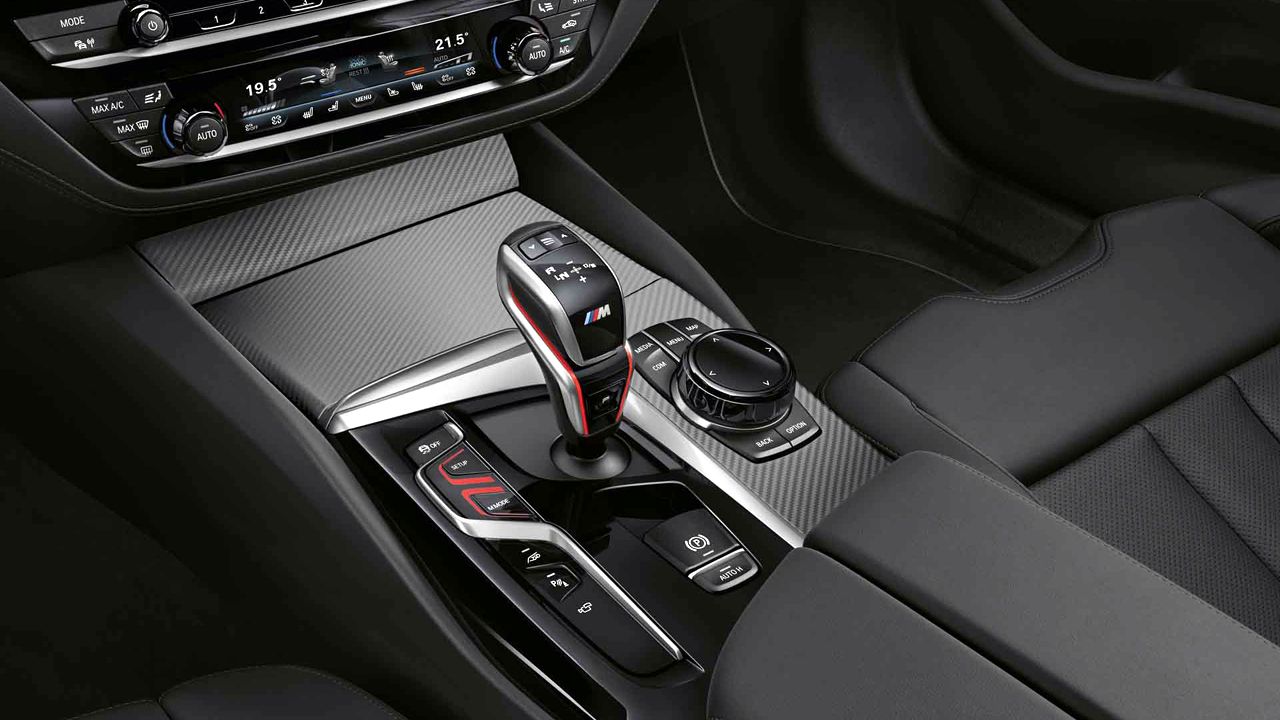