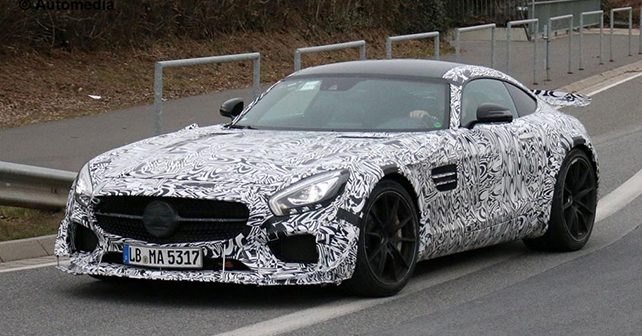 A more powerful and track focused Mercedes-AMG GT R has been spied ahead of the car’s debut at the Goodwood Festival of Speed.

Mercedes has been reportedly working on a more track focused version of the Mercedes-AMG GT supercar called the GT R. The car is scheduled to make its public debut at the Goodwood Festival of Speed.

Though Mercedes has not revealed any information yet on the development of the GT R. However, Auto Express UK has spotted the car in its camouflaged exterior testing stage in Europe.

Michelin, the title sponsor of the Supercar Paddock at the Goodwood Festival of speed has stated that the car will make make an appearance at the event in a list released by the sponsor. Full details have not been revealed, but the car is expected to have the same 4-litre Twin-Turbo V8 engine but producing around 570bhp, 67bhp more than the standard car. The trans-axle 7-speed dual-clutch gearbox will also be retuned which will probably help improve the 0-100km/h time of 3.7 seconds from the standard car. The GT R will run on Michelin Pilot Sport Cup 2 R-compound tyres.

The Mercedes-AMG GT R is likely to compete with the Porsche 911 GT3 and the Aston Martin V8 Vantage GT12. Which hints at the fact that the car will also get similar exterior and performance enhancements like the competition. This includes weight reduction, upgraded chassis, brakes and suspension in addition to the enhancements to the engine. Though the images from Auto Express UK suggest the car will not be styled as hardcore as the GT3 racecar.

The car will be more track oriented, but will also adhere to laws and regulations for customers to be able to rive them on public roads. Mercedes is expected to price the GT R at a premium of around around £135,000 (Rs. 1,33,42,957) reportedly over the price of the standard car.