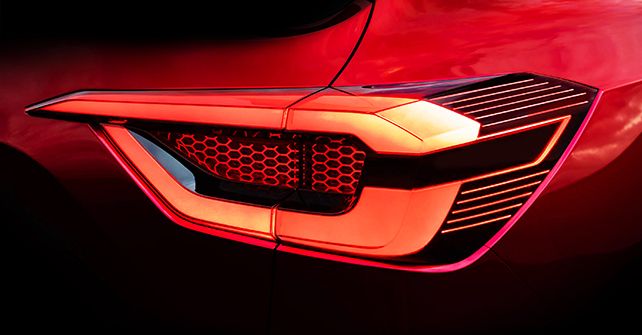 After releasing the first render of the compact SUV late last month, Nissan has released yet another teaser image, this time of the taillamp design. Nissan’s compact SUV is expected to go on sale around mid-2020

Late last month, Nissan released the first teaser of their upcoming compact SUV. The rendering of the side profile that Nissan shared revealed a raked out rear windscreen, chrome surrounds to the glasshouse and bulging wheel arches. Now, the Japanese carmaker has released another teaser image, this time revealing the taillight of the upcoming sub-4 metre SUV. As is the norm, Nissan’s unnamed compact SUV will sport LED taillamps. But what we loved the most was the incredible detailing in the taillamp profile. With intricate lines that run along the sides and the honeycomb pattern filling out the centre, the taillight unit looks stylish.

Other details of sub-4 metre SUV aren’t out yet but it is safe to assume that it will be based on the Nissan-Renault’s CMF-A platform that also underpins the Renault Kwid and the Triber. Nissan promises that this upcoming SUV will be feature-rich and stylish. The new product has been designed in Japan with significant inputs provided by the Indian division basis customer feedback.

Nissan hasn’t quite been performing as well on the sales charts as they would like and they are hoping that this compact SUV should give them the push. That being said, to make a strong impact, it will need to make an impression against some trusted and capable offerings like the Maruti Suzuki Vitara Brezza, Hyundai Venue, Tata Nexon and the likes. Expect the upcoming Nissan offering to be priced in the Rs 6.5-10 lakh price range when it gets launched around mid-2020.