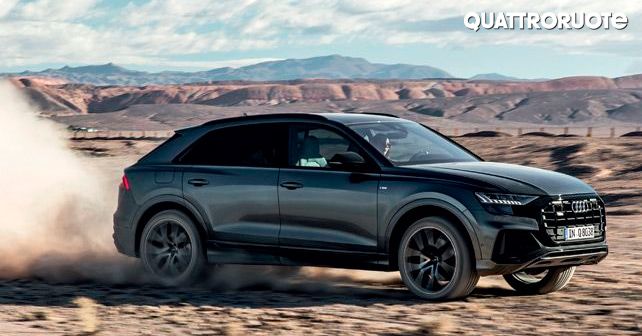 Distinctive style, taut proportions and a bullish attitude – the Audi Q8 is a sport utility unlike anything that’s ever been seen from Ingolstadt. And we drove it across a terrain that’s no less exceptional – the Atacama Desert in Chile.

The road from the airport of the mining town of Camala in Northern Chile to San Pedro, a Chilean town in the heart of Atacama Desert, is a long stretch of asphalt characterised by various colourful altars or shrines of different shapes. These are mostly small chapels to commemorate accidents that occurred on this road. Surrounded by an expanse of a moon-like landscape, full of barren land and gravel, we journeyed towards our destination in an old Chevrolet van – constantly jolting and lurching. As we went further, the Andes rose on the horizon in all their majesty, making the entire experience unbelievably surreal.

The next day, when I came back to retrace my steps in the Audi Q8 – the very reason for my presence there – I felt as if I was driving through a completely different road, for the earlier rough and bumpy ride was now perfectly smooth, thanks to the air suspension of the German SUV-coupé, which appears perfectly capable of filtering everything that comes its way. Soon the ascent began, and in a hundred kilometres I was to reach an altitude of 4,000 metres. I was now driving on winding roads, through gravel hills and breath-taking pink and orange rock spikes. They say that this dry and uninhabited land is as close to Mars as it’s possible to find on our planet. Those at Audi, however, argue that it’s an ideal place to bring out the defining characteristics of a car. 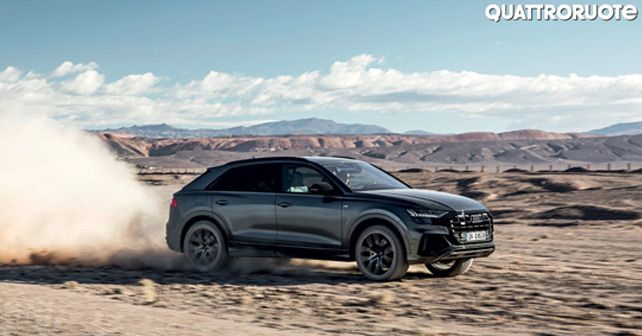 A massive beast of five meters, the Q8 gives you an impression of being even bigger. Compared to the imposing Q7, by which it’s inspired and with which it shares its platform and three-meter wheelbase, the Q8 is four centimetres lower and six centimetres shorter – mostly at the rear. With a slanted tailgate, an A7 style spoiler and a massive C-pillar, the Q8 gives you the impression of a sports sedan that sits slightly taller – something that gets confirmed once you’re behind the wheel. It has a 3.0-litre TDI engine that produces 286 horsepower and 600Nm of torque.

Agile & sporty
The Q8 surprised us from the very beginning, with its easy handling and agility. When looked at from the rear, it doesn’t seem massive at all, thanks to its aesthetic choices – like the black band that joins the rear lights, a tribute to the historic Audi Quattro. Driving this car is simply enthralling – the V6 pushes forward with massive power. Even at altitudes where oxygen levels begin to decline, causing an inevitable drop in engine output, accelerating to the full will keep you glued to your seat. The declared time for a 0 to 100km/h sprint is 6.3 seconds, which is decent considering its immense weight of 2,145kgs, despite the extensive use of aluminium in the body. As the ride continued, the ascent of the plateau became steep – without me realising it, as the car was climbing with impressive ease. It was only after reaching an altitude of 3,000 metres that the first patches of snow appeared at the edges of the road – a refreshing change in scenery.

In Dynamic mode, the Q8 is lowered by four centimetres to reduce roll, as well as its aerodynamic impact, which consequently improves the overall driving experience. Being a mild hybrid, this German SUV uses regenerative braking to recharge its batteries. Well, it’s always good to save energy anytime we can, isn’t it? Speaking of energy saving, in favourable speed ranges – between 50 and 160km/h – the internal combustion engine of the car automatically switches off. But that’s not the case in Dynamic mode – just in case you’re wondering. 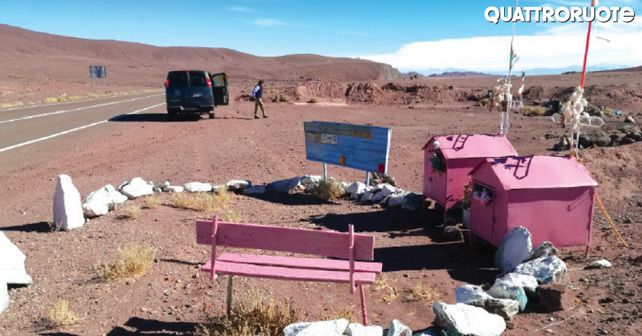 Along the road there are small and large votive chapels, often very colourful and decorative, and a cross at the foot of the climb that leads to the Andean stretch, which, with all its might, dominates the Atacama Desert.

Among the mines
After a while, in the distance, I saw a long que of trucks, moving mechanically on seemingly lost tracks, which reminded me of the country’s great mining wealth. Atacama is known for its rich deposits of various minerals, especially copper. And with the race for lithium – a key element in the electrification of the automobile industry – already in motion in the further south, Chile is sitting on deposits that could transform it into the Emirate of this century. But that’s not all! Chile is also a world class destination for renewable energies, especially wind, thanks to the wind that blows between the Andes and the Pacific Ocean.

The winding roads, with fast turns, as well as ups and downs like a ‘corkscrew,’ put my stomach to a very trying test, but hardly had any effect on the suspension of the Q8. The scenery, although brilliant and calming, lacked even the slightest trace of life. No sooner had I thought this than a herd of goats abruptly appeared on the road, shortly followed by three alpacas – making us realise that we were, after all, not alone in that part of the world. Coming back to the car – when cornering, the Q8 is excellent with well-contained body roll and mid-corner stability. The all-wheel steering is precise and quite effective, even on difficult roads. 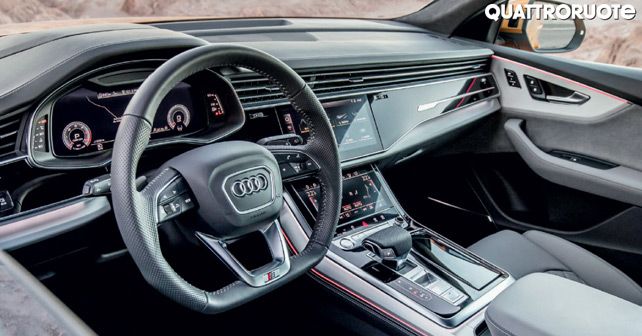 The dashboard is essentially the same as that of the A8. The two large overlapping touchscreens eliminate almost all of its physical buttons. Through the windows, one notices the details of the outside mirrors, which are clearly inherited from the Lamborghini Urus.

Soon, we arrived at the base camp, near the crater of the Inca Lagoon, which was created by a meteorite millions of years ago. It was now time to abandon the asphalt for an off-road adventure, which was moderately difficult. A push of a button activated off-road mode, raising the suspension by 50mm (the maximum range of adjustable height is 90mm) to offer a ground clearance of 250mm. Despite not being an obvious off-roader, the Q8 glided over difficult slopes, and a steep sand hill that reminded us of the Sahara, quite easily.

It was time to go back to San Pedro – a town with dirt roads and small houses with thatched roofs, which has become a hikers’ paradise over the last few years. Our route back to the town gave us a long stretch of monotonous straight road, allowing us to engage with, and test, the infotainment system of the car. The dashboard is almost identical to that of the A8 and comprises two 10- and 9-inch overlapping touchscreens and what Audi calls its virtual cockpit. There are no gesture controls though. Interestingly, the lower screen also acts as a touchpad. With the more sculpted and massive sides, compared to those of the Q7, the designers should also have redesigned the outside rear-view mirrors, but instead they decided to adopt those of its cousin, the Lamborghini Urus, which is one of the many things that they have in common – including the platform and various hidden parts. 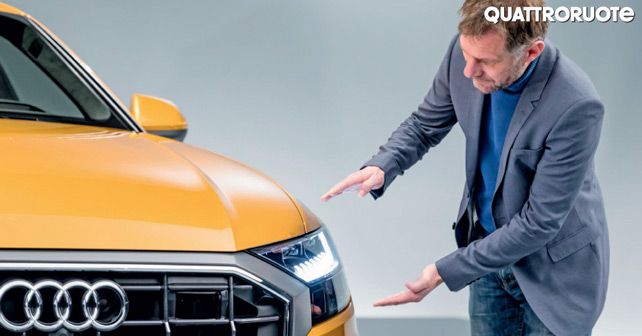 A brief conversation with Frank Lamberty, exterior designer at Audi

Hurling Audi’s Quattro into the future...

The Q8’s tail lights are developed as a single horizontal component. Is this a new trend for the Audi?
It’s a full-width light housing that distinguishes the top models, such as A7 Sportback and the A8 – a luminous signature that enhances the prestige of the vehicle and gives it a more ‘planted’ look.

What was the main goal from a styling standpoint for the Q8?
We wanted to design a car that didn’t look like a one-off, but at the same time we also didn’t want to create a coupe variant of the Q7. That’s why we gave it a special identity. Hence, the references to the Quattro, that iconic Audi model, and styling elements that we’ll see on future Qs – like the octagonal front grille.

Speaking of the grille, how difficult is it to design such a large and impactful element?
It’s very complicated, for the simple reason that it’s a component that must comply with safety standards for pedestrians, ensure efficient engine cooling and incorporate various sensors. On the new single frame of the Q8, we worked on three-dimensional shapes, a variety of finishes and had to incorporate this signature design.

It seems that there’s a kind of commitment to renew the shape of that single frame...
The single frame grille is a distinctive element of the brand, and its design is evolving. It varies in style and dimensions to suit different models, making every Audi unique and more personal.

What’s the philosophy behind the new interior architecture?
The on-board displays subdivide the control bridge in an innovative way. The idea is to make the digital user experience much simpler than before. There are only a few buttons, and even though the number of functions has grown, they’re divided pragmatically into menus and sub-menus, like on a smartphone.