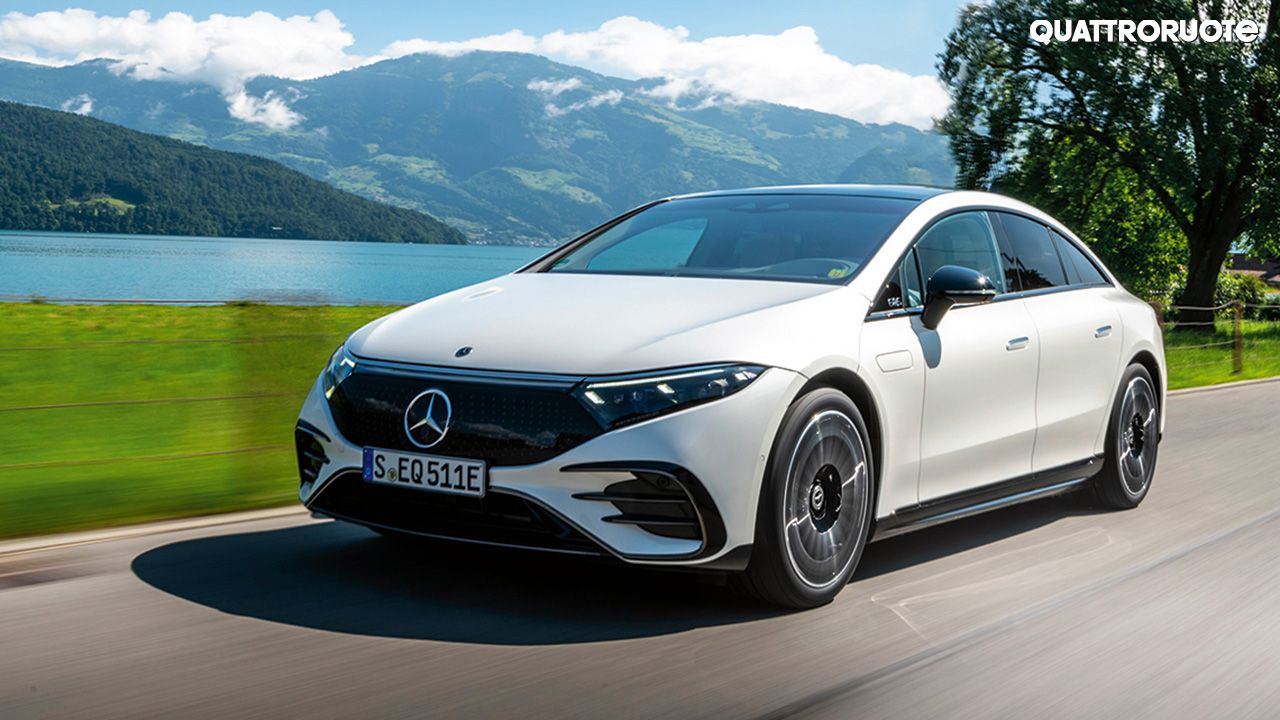 Developed from the ground up, the EQS anticipates the styling and technologies of the brand’s future. Its main highlight, however, is the class-leading range of 780kms!

The ‘S’ in its name refers to the idea of luxury, comfort, and technology, an incessant quest for innovation, which, for over sixty years, has been the fil rouge of all the Sonderklasse or the ‘Special Classes’ – the flagships of the brand with the three-pointed star. And the EQS is truly worthy of this title. Not only because it introduces a number of industry-first features – from the Hyperscreen to the EVA modular platform – but also because never before has a production car managed to achieve such high levels of efficiency. For instance, its 0.20 Cd makes it the world’s most aerodynamic car ever.

Now, it’s an achievement that speaks volumes about the care and dedication Merc engineers have put into designing it. The platform that underpins the EQS will, in fact, also spawn two SUVs and a smaller saloon, the EQE, which will be launched in the market in the near future.

Aiming for the Maximum

Let’s begin with a few numbers to get a better picture of the car in question here. With a length of over five metres, its dimensions are comparable with those of the new S Class – the EQS is just 10mm taller than the new S-Class. The presence of a 107.8kWh battery under the floor of the car, however, has modified the driving position to an extent, raising it by a few centimetres. Thanks to the adaptive set-up, the EQS is very composed around bends; however, you do feel the weight when you hustle it around. That said, owing to its rear-wheel steering, it almost feels like you’re behind the wheel of a C-Class.

The power-assisted steering makes the car easy to drive at any speed, regardless of whether you’re on the motorway or navigating the bends of an Alpine pass. Now, during the test, it was around the hairpin bends of the Furka Pass – where Sean Connery’s James Bond chased Tania Mallet’s Tilly Masterson in Goldfinger – that I first appreciated how confident this Mercedes is and the ease with which it can handle tight bends, despite its wheelbase of over three metres.

In terms of performance, the two electric motors are more than satisfactory. Floor the accelerator pedal, and you’ll find yourself pressed against the sumptuous leather seats, which also come with an extra neck cushion. Like all models in the S family, the EQS has a comfortable interior, especially the rear, which offers plenty of legroom for rear passengers and electrically reclined backrests for travelling in utter luxury.

The setup, which excellently filters out most imperfections of the road, also contributes to the comfort of occupants, and so does the excellent soundproofing of the cabin. Even at high speeds, you will find yourself travelling in silence – you will only hear hushed noises from the mirror area, and that’s about it.

For safety reasons, the mirrors are traditional – the German engineers explained to us that in the case of digital rear-view mirrors, the screens are on a different visual plane, which can reduce the driver’s reaction time in the event of danger. Safety, after all, was a priority during the development of the EQS. It already has various ADAS features, but in the coming months, it will come equipped with the Drive Pilot ­— a Level 3 assisted driving system, which controls steering, brakes, and accelerator on certain motorways – in some markets. European laws so far limit its operation to a maximum speed of 60km/h and do not allow automatic lane changes.

One of the crucial points of an electric car is, of course, its range. And with its 107.8kWh battery, the dual-motor version promises more than 670kms in the WLTP cycle, which will increase to over 780km in case of the less powerful rear-wheel-drive 450+.

Thanks to over-the-air updates, these numbers are set to increase, periodically. Mercedes will release a series of upgrades to improve the efficiency of the powertrain, along with the car’s various functions over time. Charging systems of up to 22kW are available for domestic charging, while at DC stations, the EQS can be charged using quick chargers of up to 200kW.

According to Mercedes, a quarter of an hour is enough for a fast charger to restore 300kms of range, and going from 10% to 80% of its capacity would take over half an hour – just enough time for a quick lunch in the cafeteria of a motorway service station. 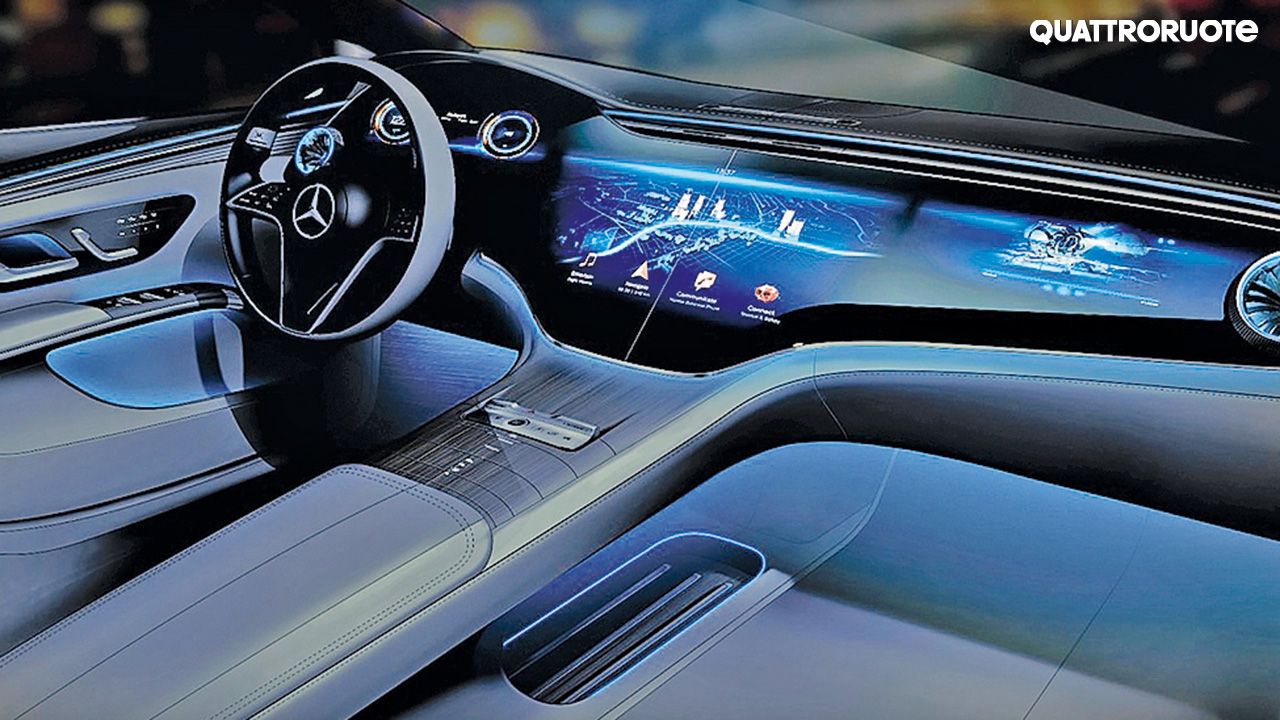 One of the most striking innovations to debut with Stuttgart’s new electric car is the MBUX Hyperscreen – a multimedia system featuring three ultra-high-definition displays under a single 55.5-inch long glazed glass surface. Apart from the digital instrument panel, the dashboard of the electric Sonderklasse features a 12.3-inch screen on the passenger side, which can be used to control numerous infotainment functions. It’s the central touchscreen, however, that steals the show – with a diagonal length of 17.7-inch, it’s the largest screen to have ever featured in a production Mercedes. It can be used to manage all the car’s functions, including climate controls, which remains visible at all times. You can also use voice commands for many functions of the car. For a better user experience, the management software incorporates what’s called the ‘zero layer’ concept, which displays the most important information at the top of the driver’s visual field, so as to reduce distractions while driving. The crispness of the system is guaranteed by high-end hardware, which includes an octa-core processor and 24GB of RAM. In short, the MBUX is more powerful than a mid-range laptop. 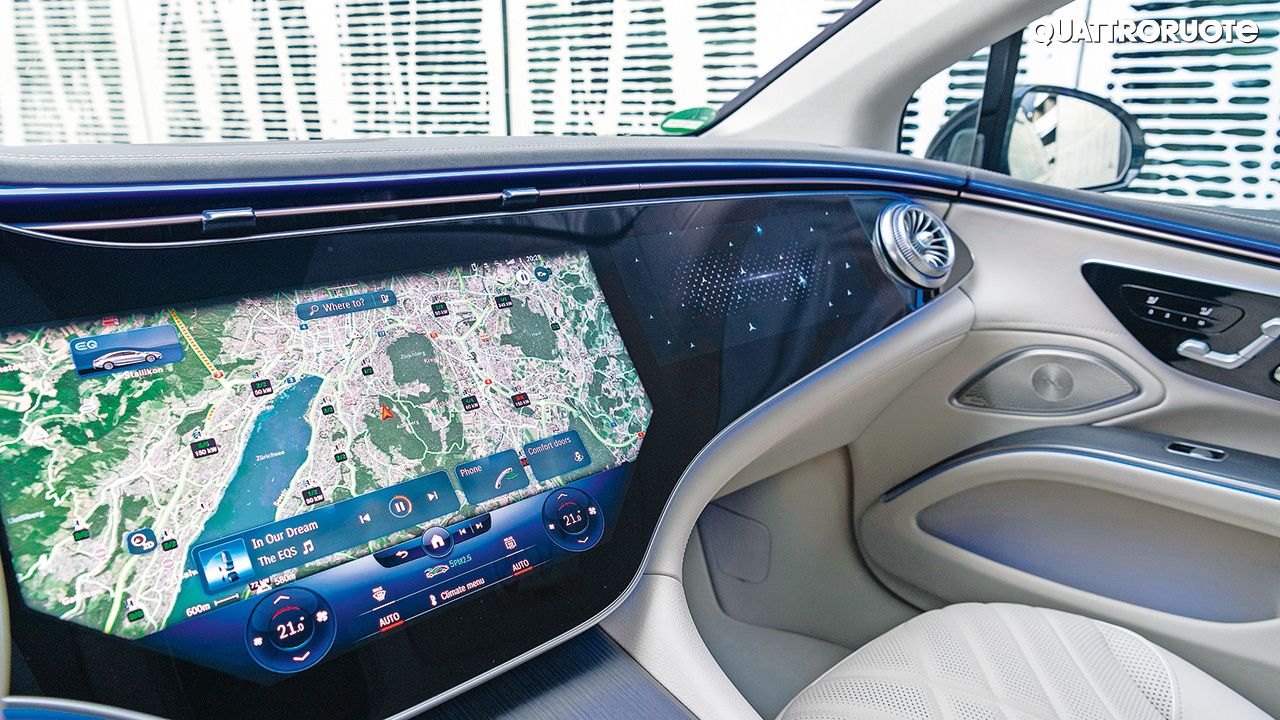 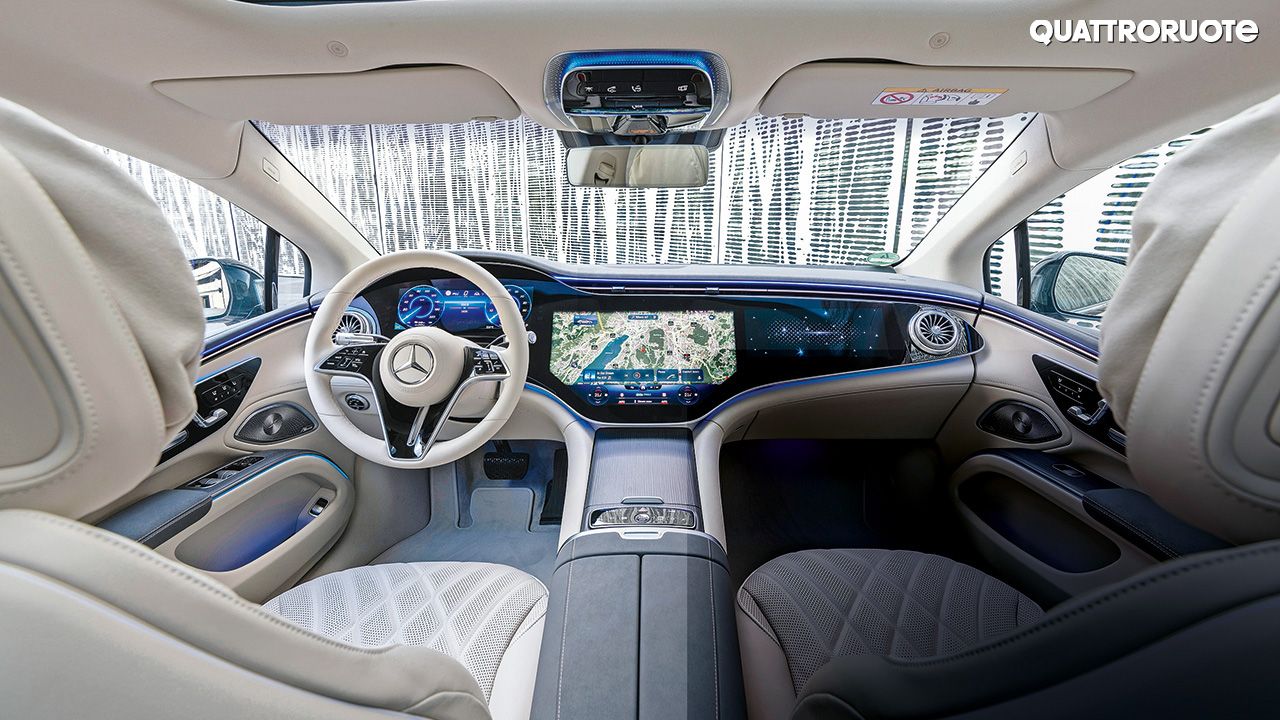 The presence of the large screens of the multimedia system adds to the overall elegance of the interior. The air vents follow the course of the dashboard, merging with the soft upholstery, which characterises the dashboard and doors. 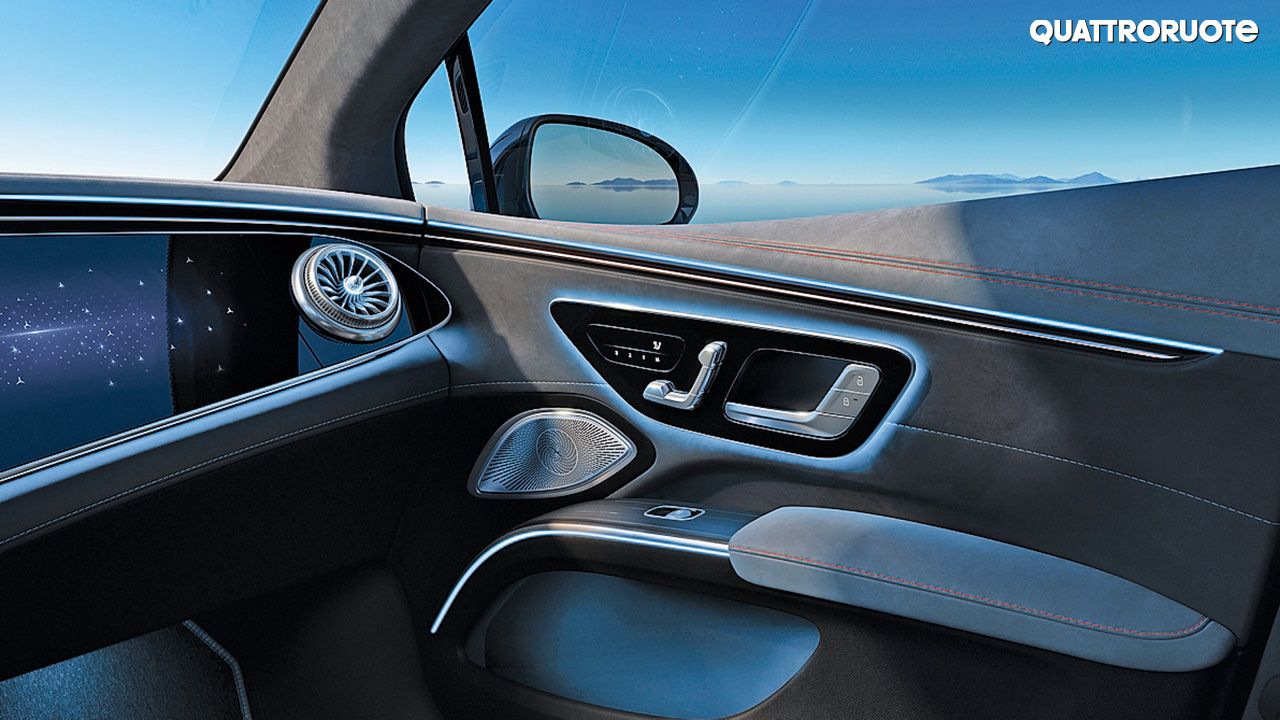 The interior lighting of the EQS is an integral part of the interior design. The LED strips emphasise the contours of the dashboard and highlight other details, such as the door handles and pockets.

Every aspect of the EQS has been designed to maximise efficiency. Its form, sculpted by the wind, offers a record aerodynamic coefficient of 0.20 Cd – the lowest figure in the world for a production car. This has been made possible by the refinement of all bodywork components, which feature additional seals in their joints to improve air flows and reduce drag resistance. The bonnet, for example, is fixed and can only be opened in a workshop – for washer fluid, a flap has been cut in the left.

Apart from aerodynamically improving the EQS, these features also make it quieter – travelling at highway speeds, the rustling is almost imperceptible. The bottom of this German automotive wonder is almost completely flat – there are only a few small openings for the cooling of the batteries. Even the wheels have been designed to reduce turbulence.

At the front, the classic grille with chrome trim has been replaced by a new black panel – a plastic shield that conceals radars and sensors, which are used for assisted driving. To combine styling and aerodynamic requirements, the designers have integrated small spoilers into the taillight clusters and added a plastic profile to the front pillars to better connect them with the windscreen. True, they are almost invisible details, but when added together, they can make a hell of a lot of a difference. Finally, the doors have retractable handles, which on some versions open by themselves when the driver approaches the car. To activate the opening system, all you have to do is to touch – a real coup de theatre. 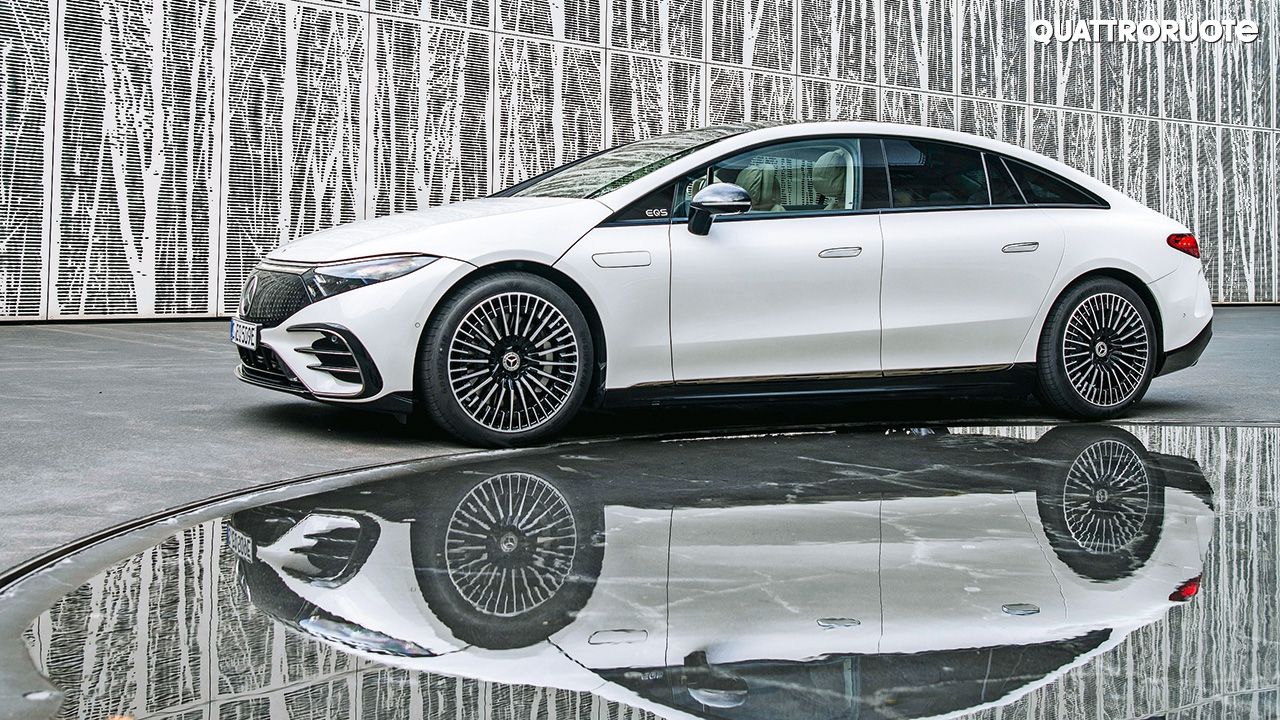 One of the reasons the EQS has a stellar range is its ability to cut through the air efficiently – the shapes have been studied in the wind tunnel, thanks to a joint endeavour of the style centre and aerodynamics experts. For this reason, too, the EQS resembles the concept in terms of appearance.