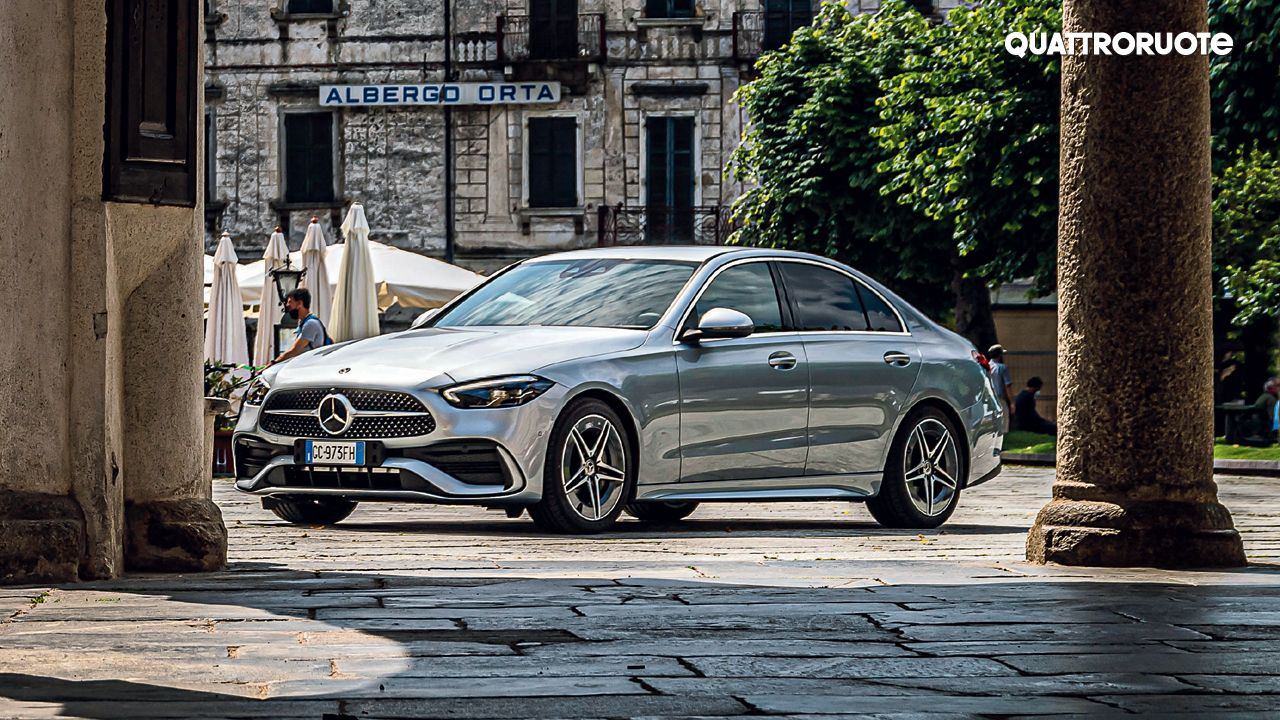 The 5th generation of the C-Class is here. Equipped with the latest technology – borrowed from the S-Class – state-of-the-art active safety features and a frugal diesel engine, the new ‘C’ is all set to change the game.

As you place yourself firmly behind the wheel – the 66-litre fuel tank filled to the brim – you notice that the indicated range is over 1,300kms. You look through the windshield at the empty stretch of the highway that lies ahead, and you can’t stop yourself from being glad that you’re in a sedan – and not, what is now the norm, an SUV!

You’re now ready to fire the turbo-diesel under the hood – another choice that’s not exactly mainstream these days. You set the cruise control to 130km/h, and, as the revs stabilise at 1,600rpm, courtesy of the magic of the nine-speed automatic transmission, you know in your heart that you never want to get out of this sedan. 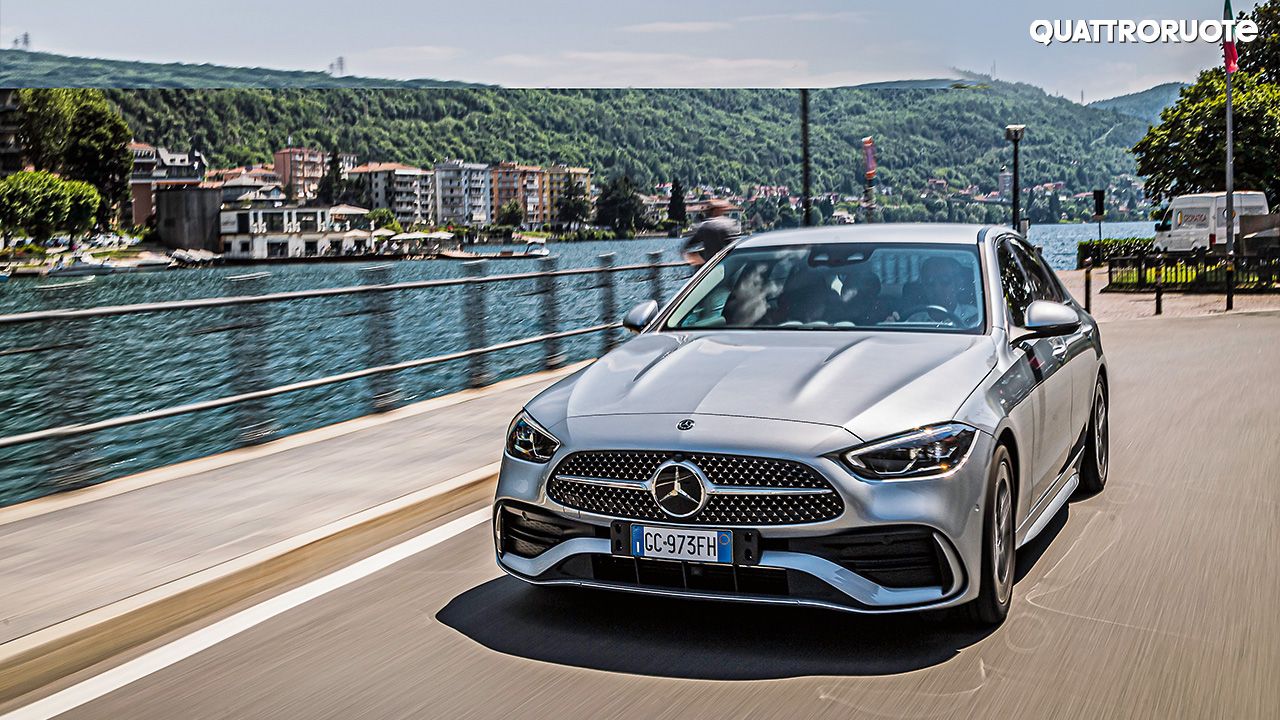 The absence of any wind noise pleasantly surprises you, and so does the absence of tyre noise – at this speed, only 67 decibels can force their way into the cabin. This means that you won’t have to raise your voice to talk to someone inside the cabin and that the most annoying sounds, try as they may, won’t reach your ears.

Thanks to a longer wheelbase (up from 2,840mm to 2,870mm), there are a few extra millimetres of legroom in the back. The transmission tunnel is always problematic in low-slung sedans, and that hasn’t changed even now, but, as long as only four of you are travelling, you won’t have any reason to complain about the levels of comfort. Even on long journeys, you’ll find yourself falling in love with this C-Class.

And comfort is not its only highlight – in fact, those who have to drive long distances on a daily basis will be happy to know that the new C-Class simply nails the fuel economy aspect. Thanks to its 197bhp 2.0-litre turbodiesel, coupled with a mild-hybrid system, and carefully crafted aerodynamics, it can cover a lot of distance without using too much fuel.

From tollbooth to tollbooth, we recorded a fuel economy of 20.6km/l, which increases to 20.8km/l during out-of-town trips. These figures are really impressive, given that they are unattainable even for certain small cars, but this C-Class achieves them quite nonchalantly. In the city, however, the economy levels drop to a more real-world 15.1km/l – but that’s to be expected, and in line with its main rivals. 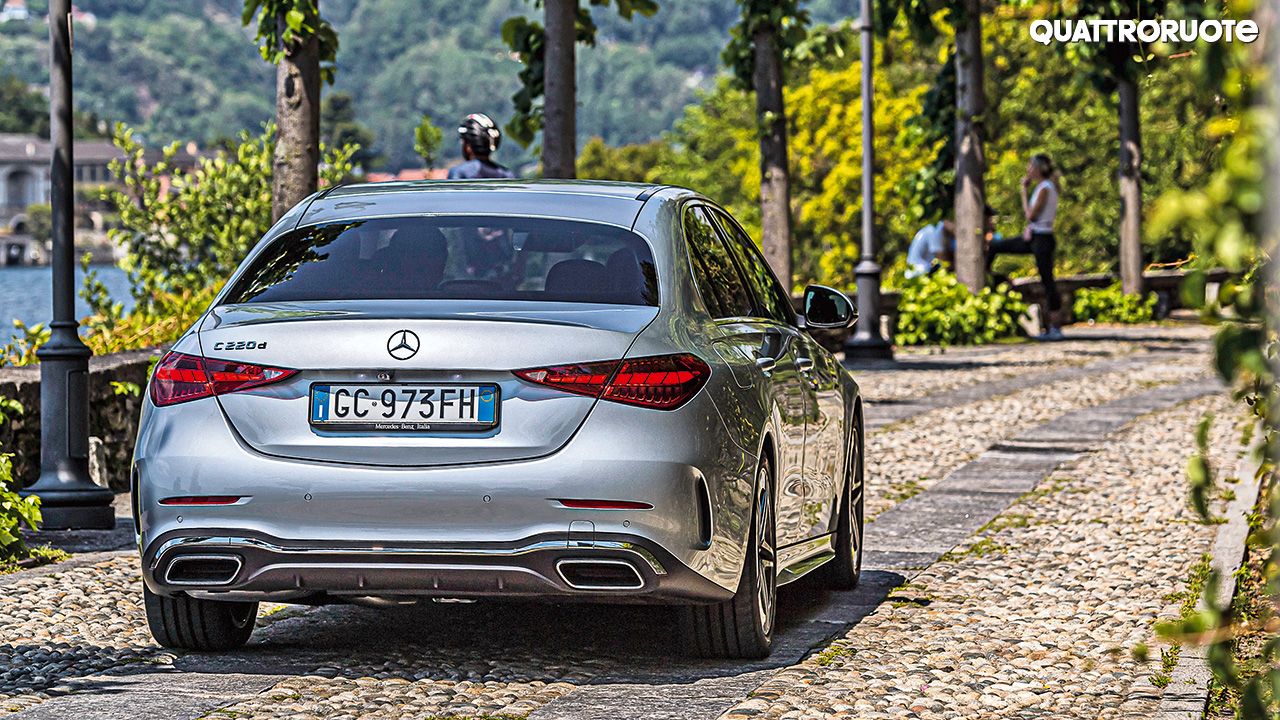 Among other things, its low thirst for diesel goes hand-in-hand with its performance, which, however, is not exactly extraordinary – the BMW 320d, for instance, is a bit faster than the C-Class in the classic sprint to the traffic lights. This, however, doesn’t mean that this Mercedes is clumsy. Far from it! The right pedal offers you all the grunt you’ll need, and should you need to regain some lost pace, you’ll find the nine-speed automatic transmission to be an excellent ally.

Inspired by the ‘S’

So far so, so good. You’re enjoying the drive. The asphalt is flowing under the wheels like a river determined to lose itself in the open expanse of the sea, but the journey is still long. So, let’s use the time to appreciate the new dashboard, which follows the elegant style heralded by the S-Class, with an emphasis on multimedia. At the centre, as if resting on the console vertically, is the 11.8-inch MBUX touchscreen, which is accompanied by a 12.3-inch configurable instrument cluster behind the steering wheel.

We’ve said it before, and we’ll say it again – it’s one of the best infotainment systems available in the automotive world. And one that can actually be managed by voice – with a voice assistant that understands complex phrases and different accents quite well. However, it doesn’t have the touchpad found on other Mercedes models. This means that finding the right button on the screen while driving can be distracting. So, if you are one of those who spend many hours behind the wheel, make sure you opt for the optional (in Europe) Driving Assistance Plus package, for it includes a series of features that exponentially increase active safety. To get a better idea, just look at the box on the right – an extraordinary string of five stars, the likes of which have never been recorded before. 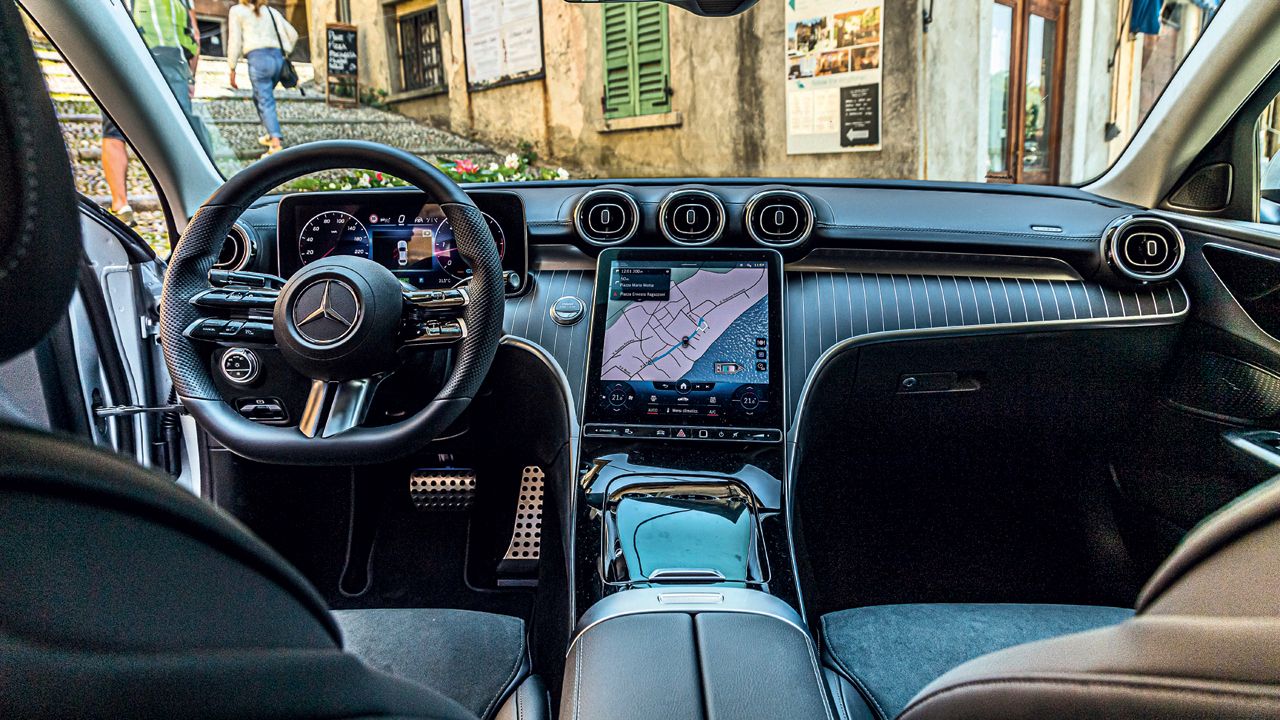 During the test, the automatic braking of the C-Class worked in an exemplary manner, avoiding any kind of contact with both the dummies of an adult pushing a stroller and a child with a backpack, as well as with the dummy of a vehicle that we used in our tests. Compared to some recent Mercedes models, the response of the lane-keeping assistant has also been softened – when the wheels end up on the white line, the system simply corrects the trajectory by acting on the steering, without intervening, rather annoyingly, through the brakes.

Now, the brakes do not have any particular problems in dry conditions. However, on slippery surfaces, the stopping distance increases considerably – almost 127 metres were needed to come to a dead stop at the speed of 100km/h when one-side wheels were on a wet surface, while the other-side wheels on a surface with even lower grip levels. How can this be explained? Let’s turn to the tyres for a moment – they sacrifice a conspicuous amount of grip in favour of low rolling resistance, which is necessary to contain fuel consumption. Incidentally, this feature of the tyres, to an extent, is also responsible for rather low lateral acceleration figures and double lane change speeds on wet roads. Mind you, the ESP works well, and you get a feeling of being in a very safe car that does not suffer from any unpredictable reactions. However, at the limit, you do feel a certain lack of grip.

The suspension setup of our test car performed unexpectedly well, even where the road surface was anything but perfect – it didn’t feel too stiff even while driving over bumps and other obstacles. Having said that, the C-Class is a proper machine to enjoy a nice twisty section of the road.

While we wait for a direct comparison between the C-Class and its rivals, let’s see if it can play alongside the BMW 3 Series in terms of driving pleasure. There’s a nice precision in the way it follows trajectories, and the body movements are quite controlled. The steering impresses more in terms of precision and progressiveness than readiness – it communicates in a fairly detailed manner and, overall, adheres to the character of this Mercedes. You get to a quick pace effortlessly – at least that much is undeniable. However, despite the changes to the front suspension – there's a wishbone in place of the previous MacPherson layout – and fine-tuning, the BMW remains the benchmark. 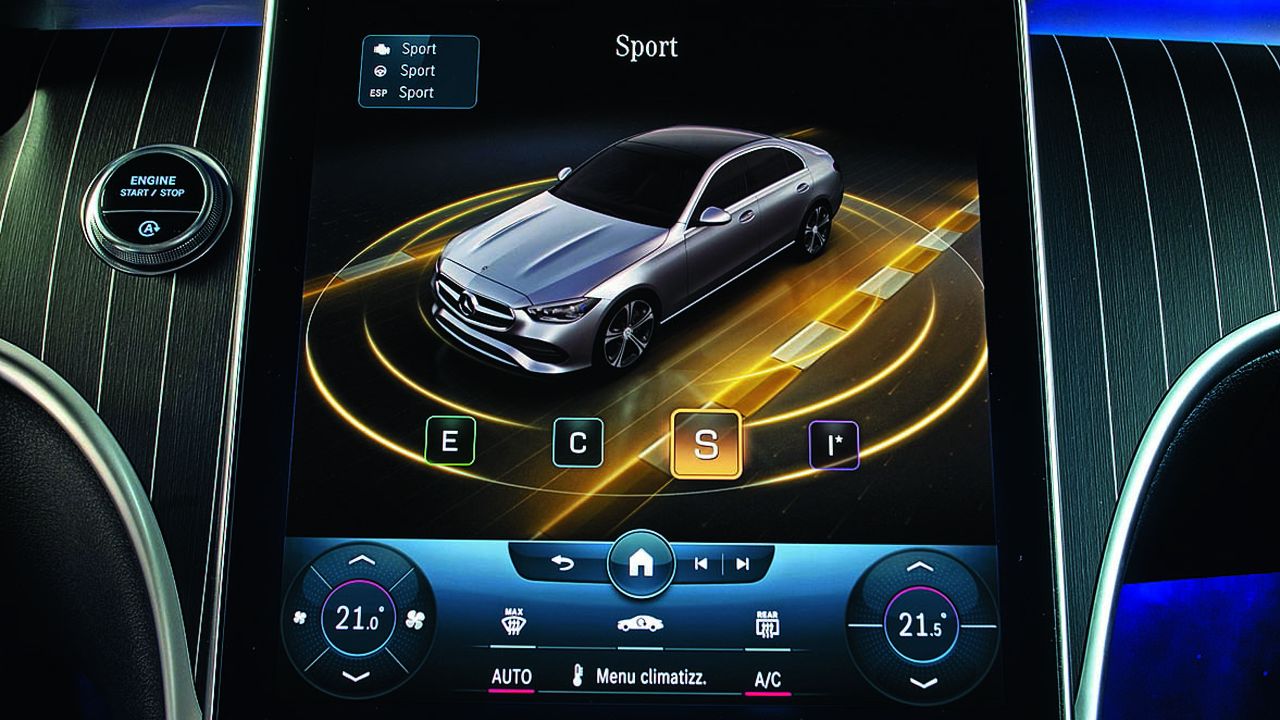 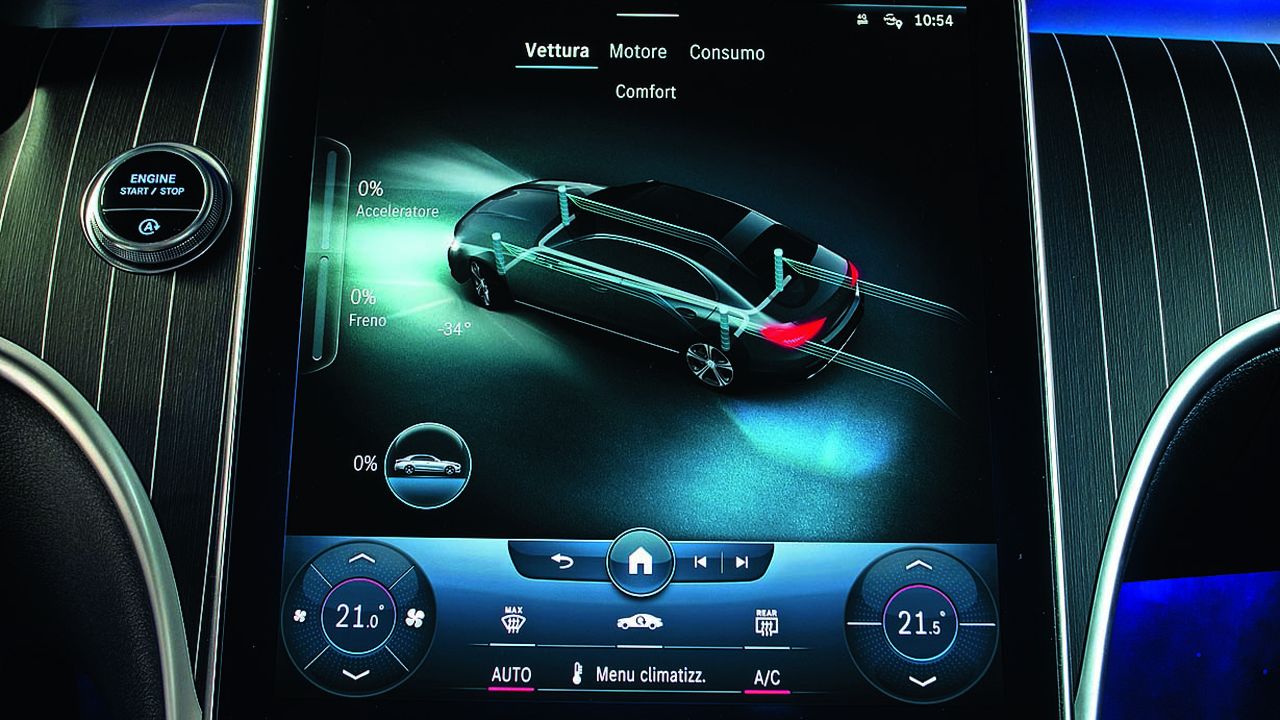 Almost suspended on the dashboard, in an upright position and slightly oriented towards the driver, the 11.8-inch diagonal screen of the MBUX multimedia system catches your attention immediately. The resolution of the screen is simply excellent, even for maps – monuments of historical importance stand out in 3D and bodies of water move, a bit like in reality. Moving through various menus is quite simple, but while driving it’s advisable to rely on the excellent voice assistant – it responds to the phrase ‘Hey, Mercedes’ and effortlessly performs most functions, from setting the temperature in the cabin to choosing a radio station. The MBUX can also help you remotely control air conditioning, lighting, blinds, and electrical appliances in your home, provided that your home is equipped with a home automation system, which, for now, is provided only by Bosch and Samsung. Finally, the tablet on the dashboard can be used for finding information regarding consumption averages and weather forecast, web browsing, finding restaurants, bars, and hotels in the vicinity, and managing the four driving modes – Eco, Comfort, Sport, and Individual, the latter of which adapts the car to the driver’s taste and preferences. 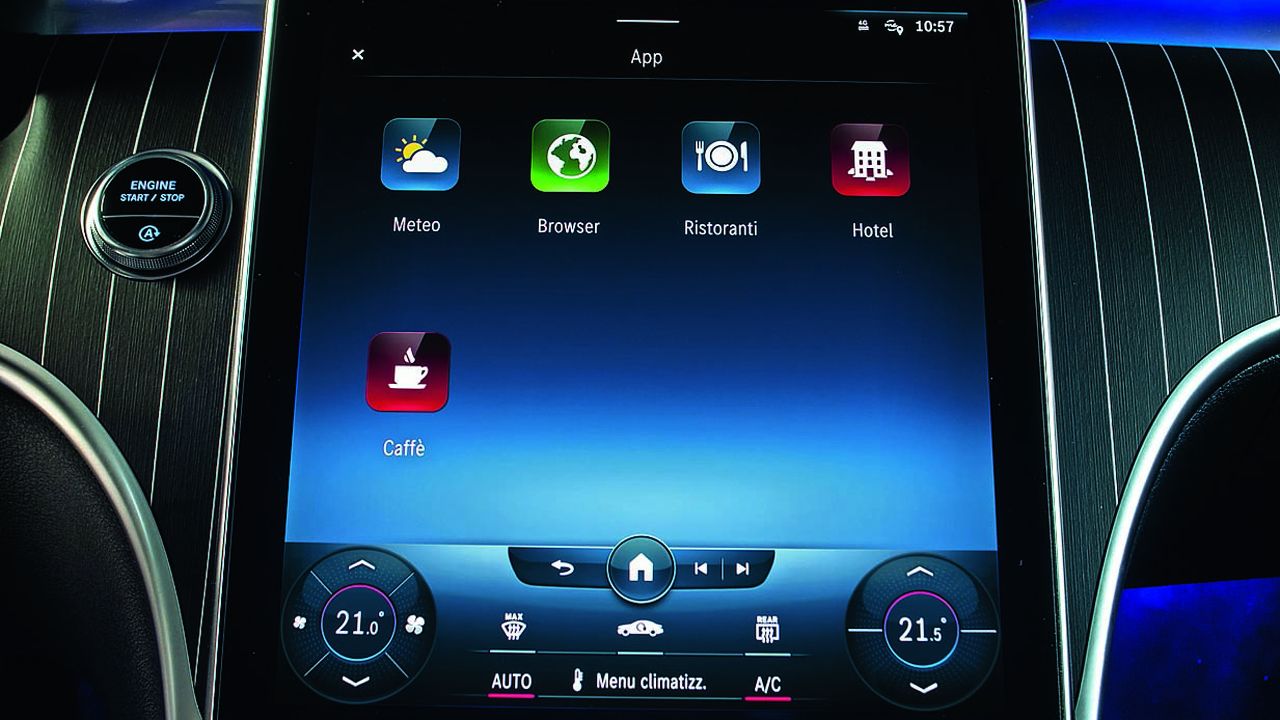 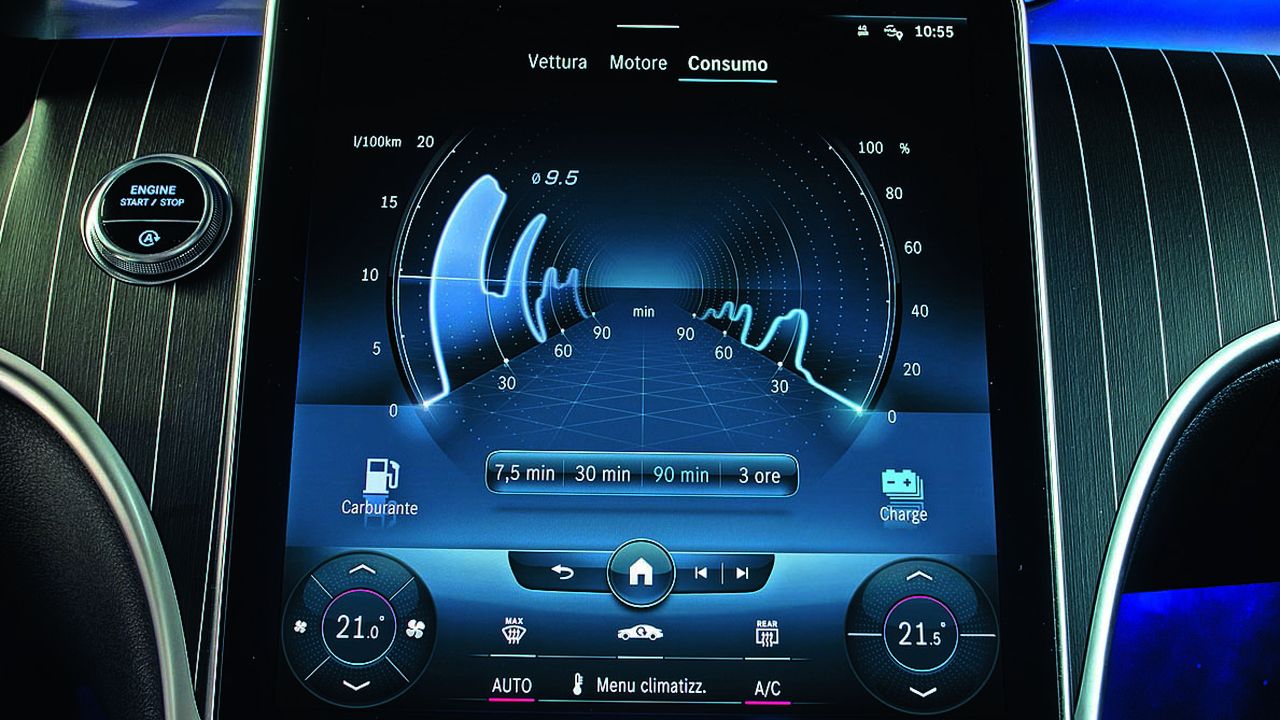 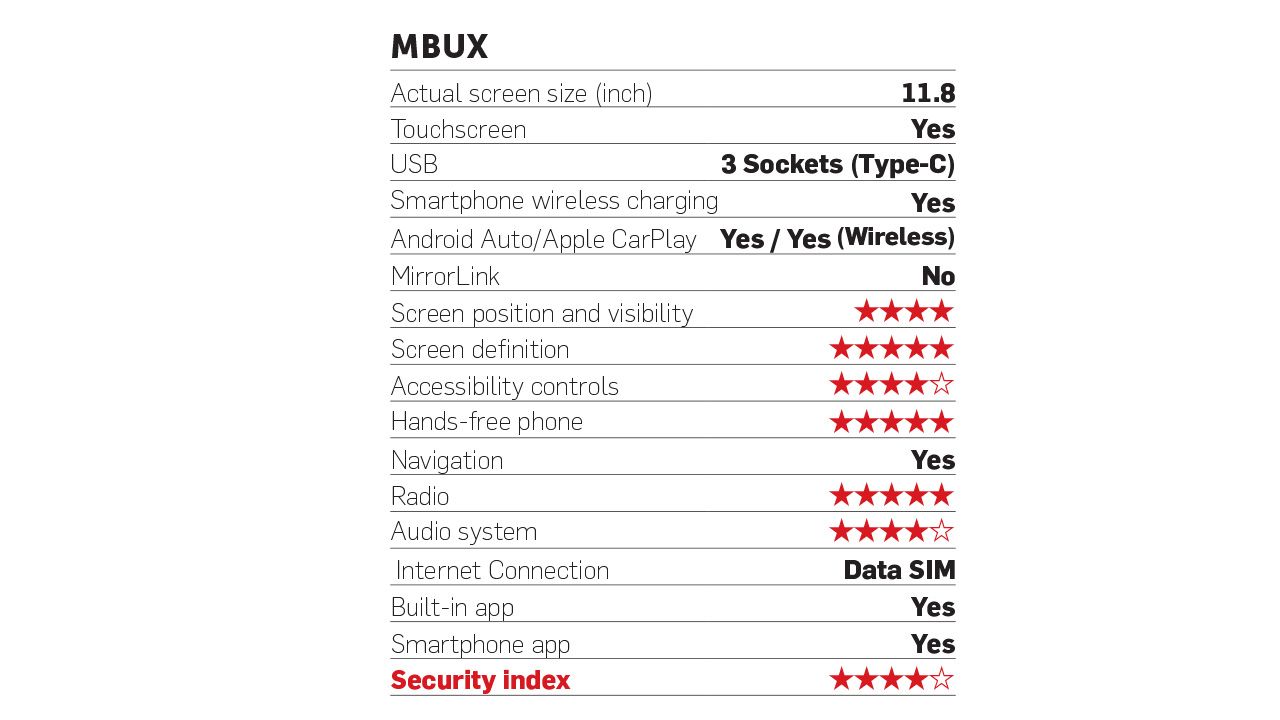 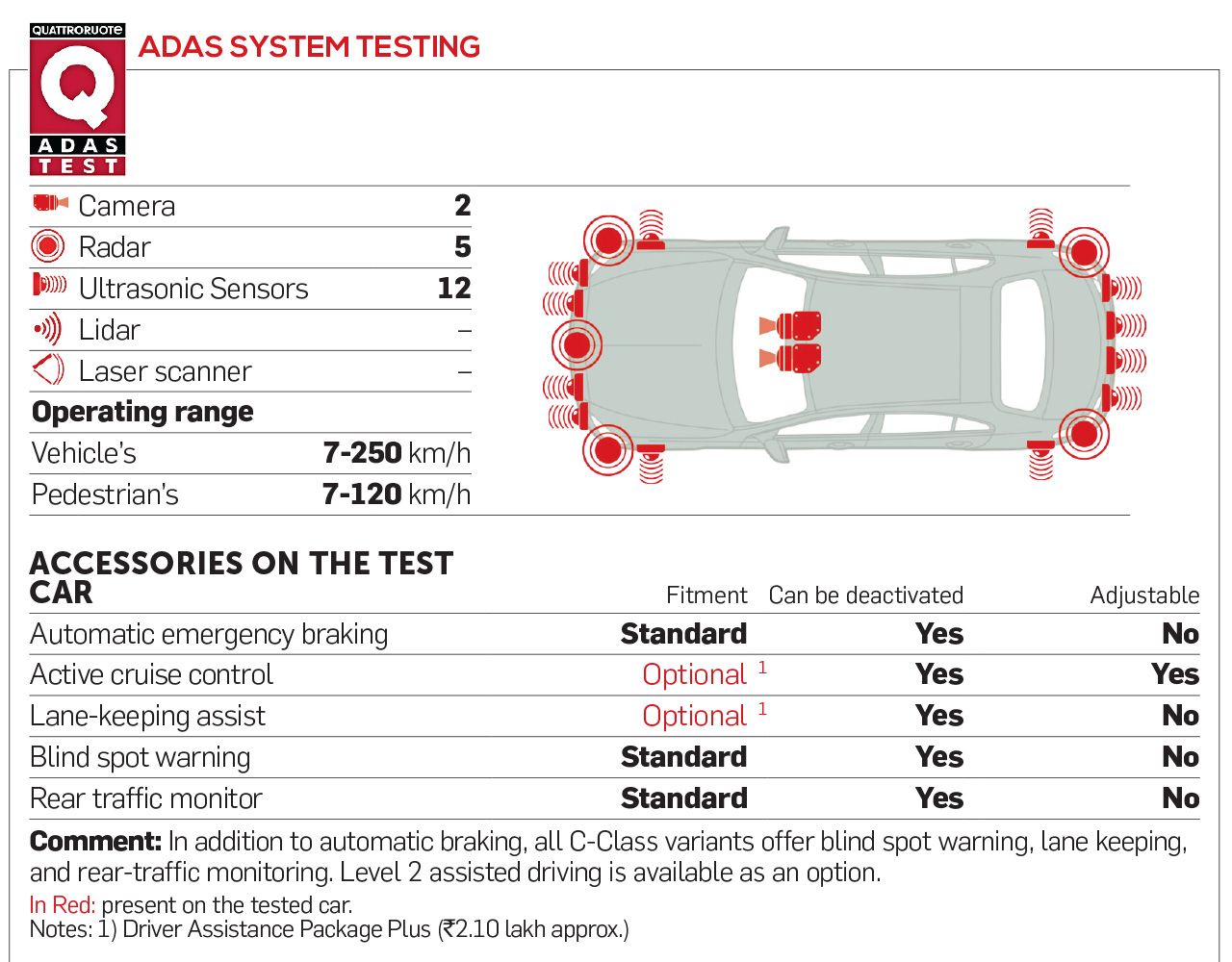 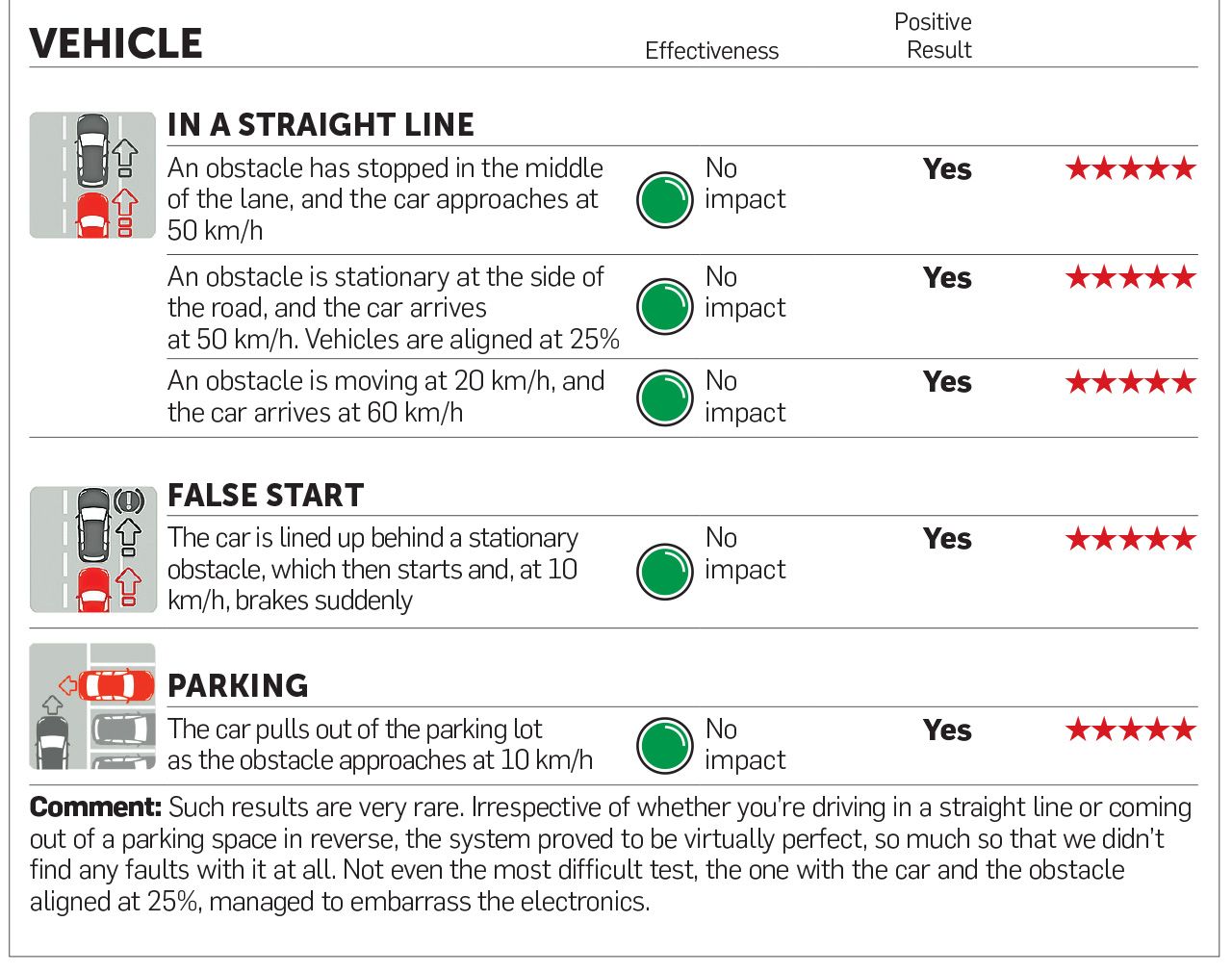 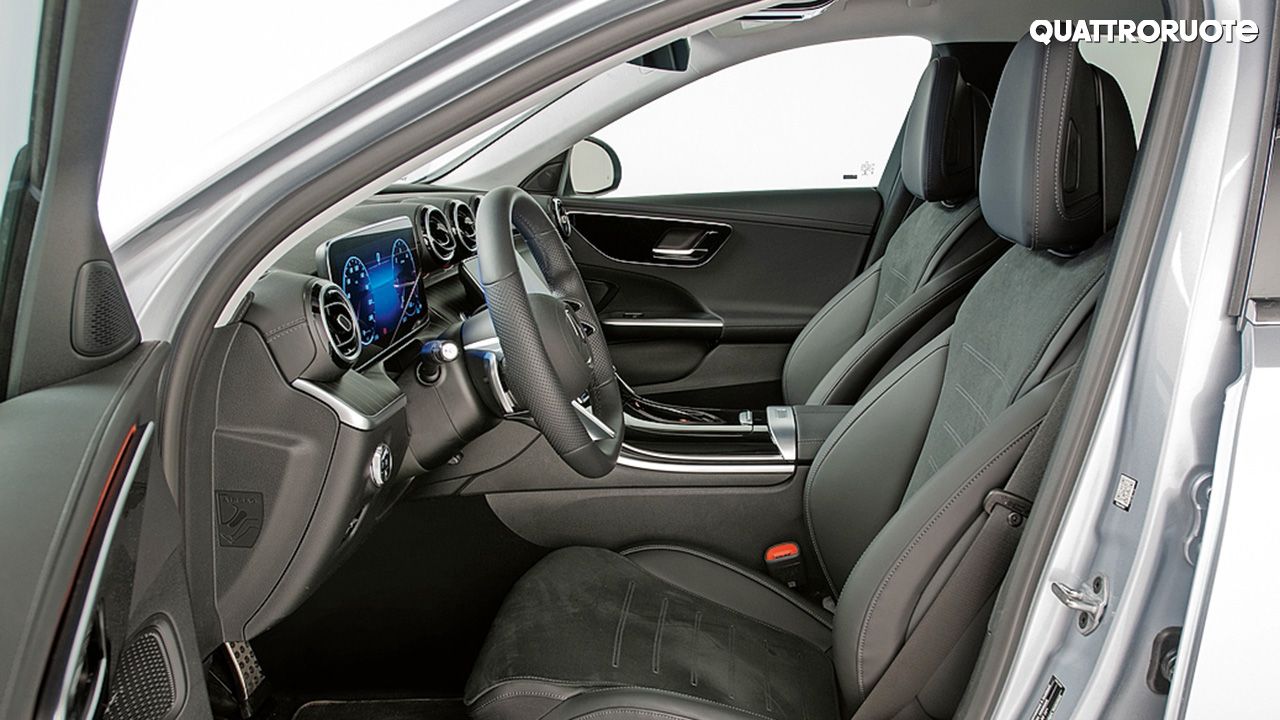 The front seats offer electrically adjustable lumbar support. Below: the rear seat is for two passengers. The accessibility, due to a sloping roofline, is not the best. 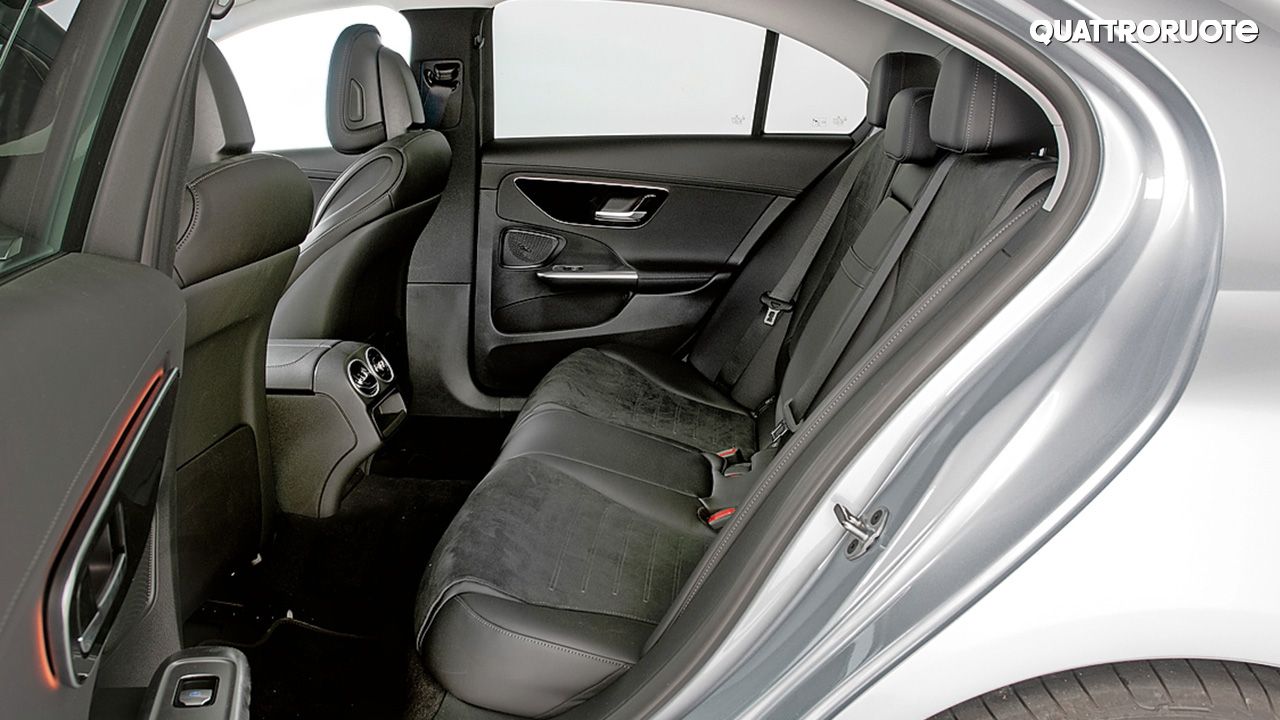 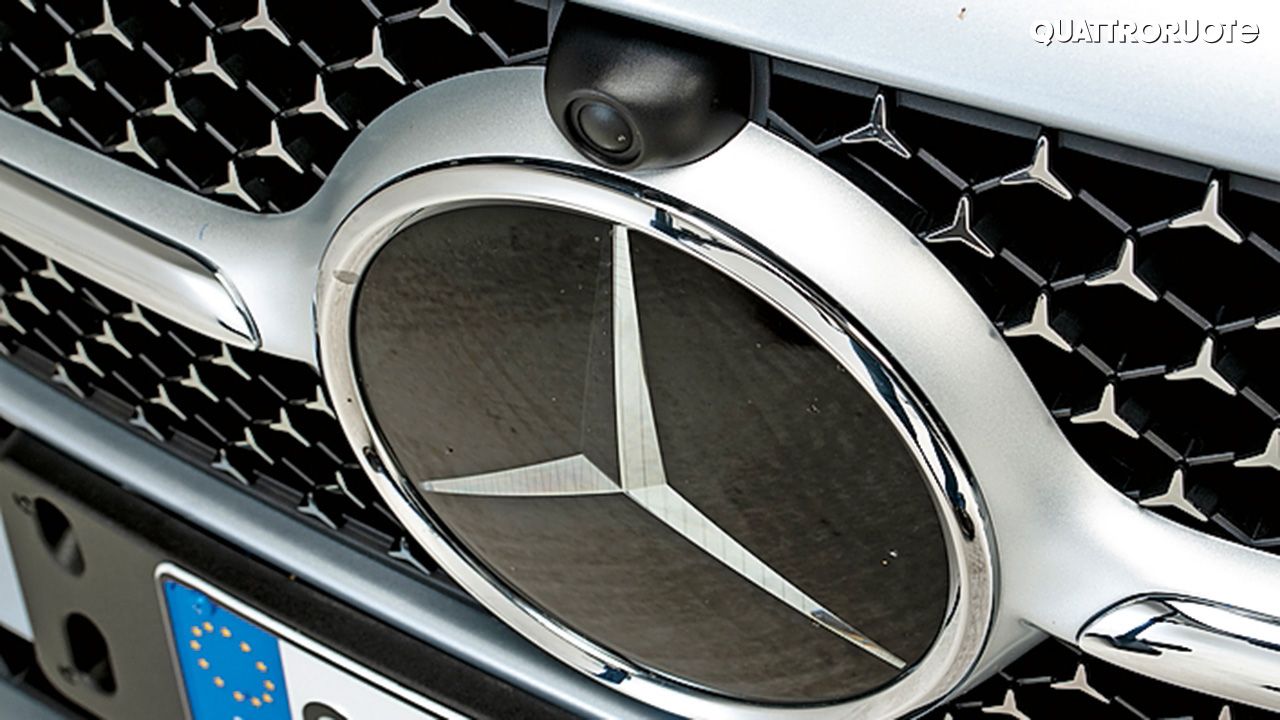 For some time now, the three-pointed star has disappeared from the hood and moved to the grille. The LED light clusters are standard, and so are the 18-inch alloy wheels with this AMG styling kit. 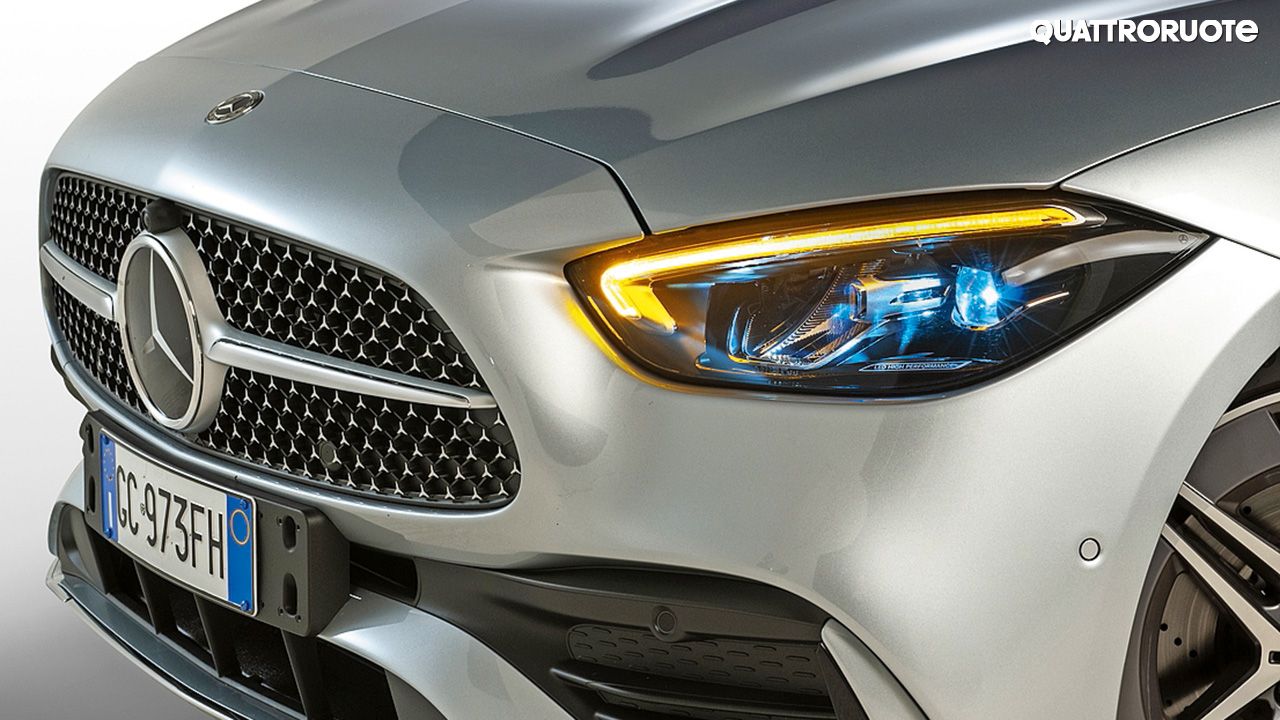 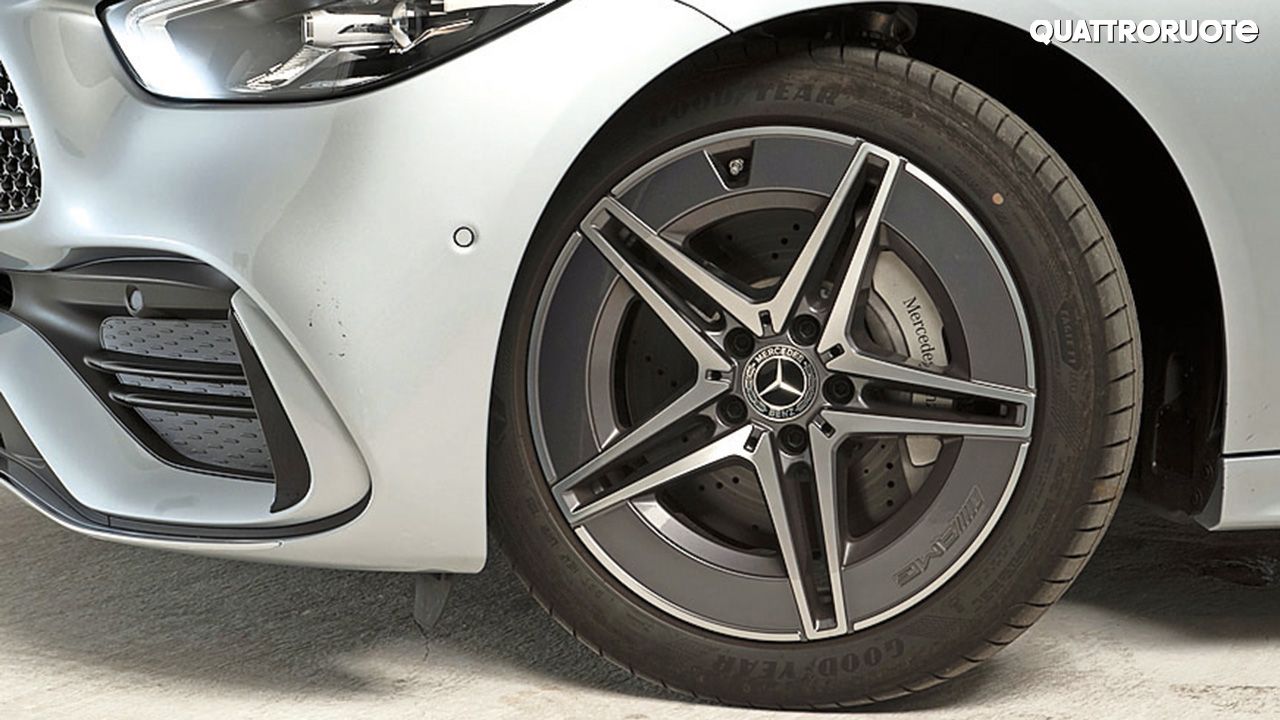 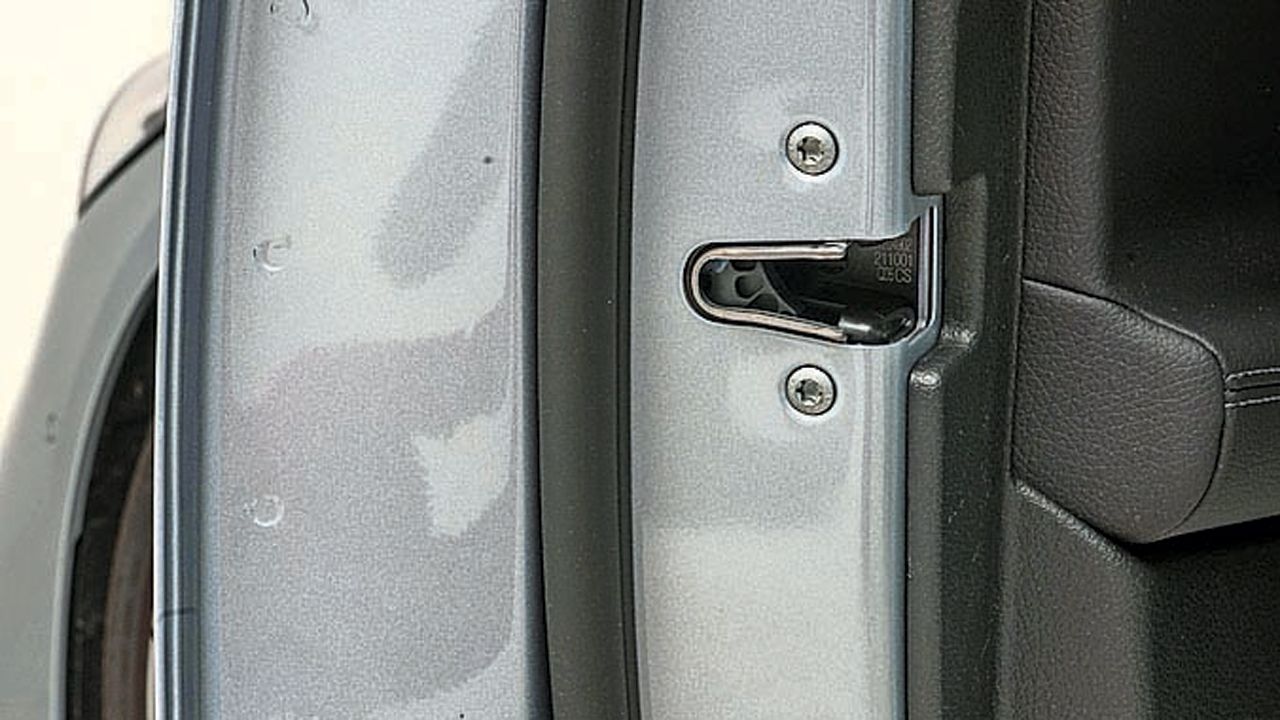 For many years, Mercedes has maintained the level of quality appropriate to its status in the automotive world, and the new C-Class is no exception. In fact, it’s really difficult to find any real constructive defects, since everything is precise and to the point. The paintwork and the bodywork assembly are flawless, without any lack of fine details, such as the plastic cover, which conceals the sheet metal in the area around the luggage compartment, visible only when the boot is open. The cabin satisfies, with its attention to detail and top-notch quality. However, if you want to nit-pick, you’ll notice a few oversights, such as welding points visible on the front doors when they are open and a rear seat that could be finished a little better. 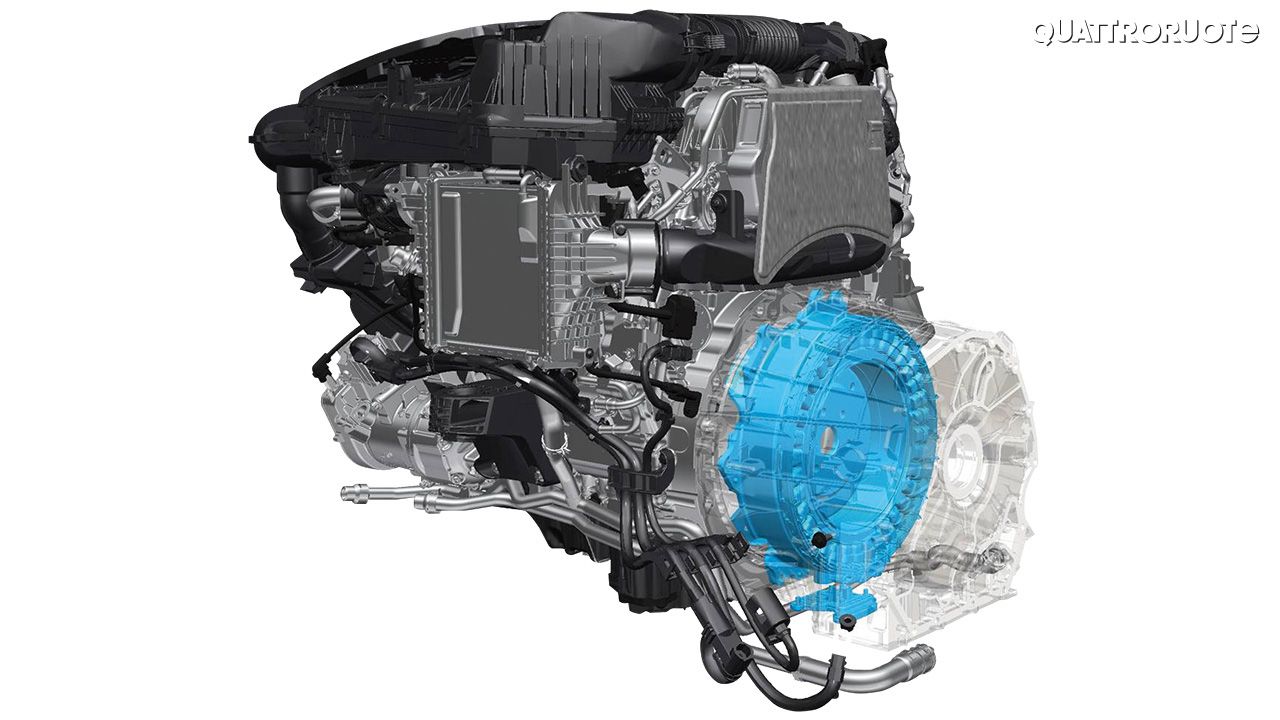 Twenty-eight years after its birth, the fifth-gen C-Class evolves by offering some features that were previously reserved for larger models. Let’s look at two examples. The double-wishbone front axle – which replaces the MacPherson strut, outclassing it in terms of driving performance and comfort – and the automatic steering of the rear axle (optional), which improves handling at low speeds and stability at higher speeds. At high speeds, the C-Class has always behaved well, thanks to the independent multi-link rear suspension, designed by Mercedes for the 190 in 1982. Moreover, in terms of passive safety, the German automaker has equipped the C-Class with a central airbag for the front seats, which, in the event of a violent side impact, deploys between the driver and the front passenger, reducing the risk of contact between their heads. In terms of active safety, it gets Digital Light headlamps, based on the light generated by just three LEDs, which is modulated and distributed extremely precisely on the road by means of 1.3 million micro-mirrors. The hybrid diesel engine is the evolution of the well-known OM 654 – thanks to the 48-volt, 15 kW, 200Nm ISG motor-generator, which replaces the flywheel (in blue in the image on the right), it makes it possible, among other things, to do without a traditional starter motor. The engine’s displacement has gone up from 1,950 to 1,992cc, thanks to a new crankshaft, which increases the stroke by 2mm, while forced induction is obtained with two turbos, both with variable geometry. Injection pressure has increased from 2,500 to 2,700 bar, and this helps to contain raw pollutant emissions, which are then drastically reduced by a sophisticated exhaust gas purification system. Like the original engine, this one, too, includes an oxidation catalyst, combined with an LNT accumulator purifier for nitrogen oxide, a particulate filter and an SCR, again for NOx. Everything is located close to the turbocharger for maximum activation speed after starting up. Specific to the new C-Class is the adoption of a second SCR (with its own AdBlue dispenser) located under the floor, which targets exhaust gases after they have cooled. In this way, the reduction of nitrogen oxide is maintained at a high level even in the most challenging operating conditions. 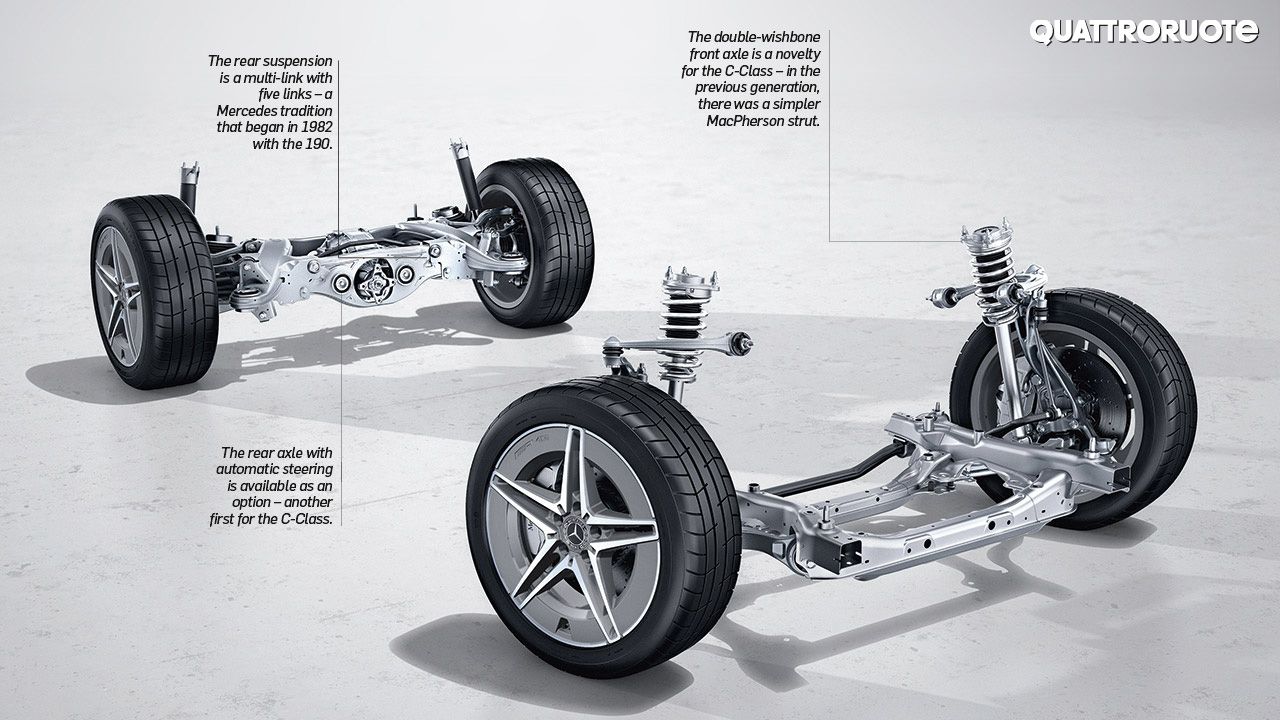 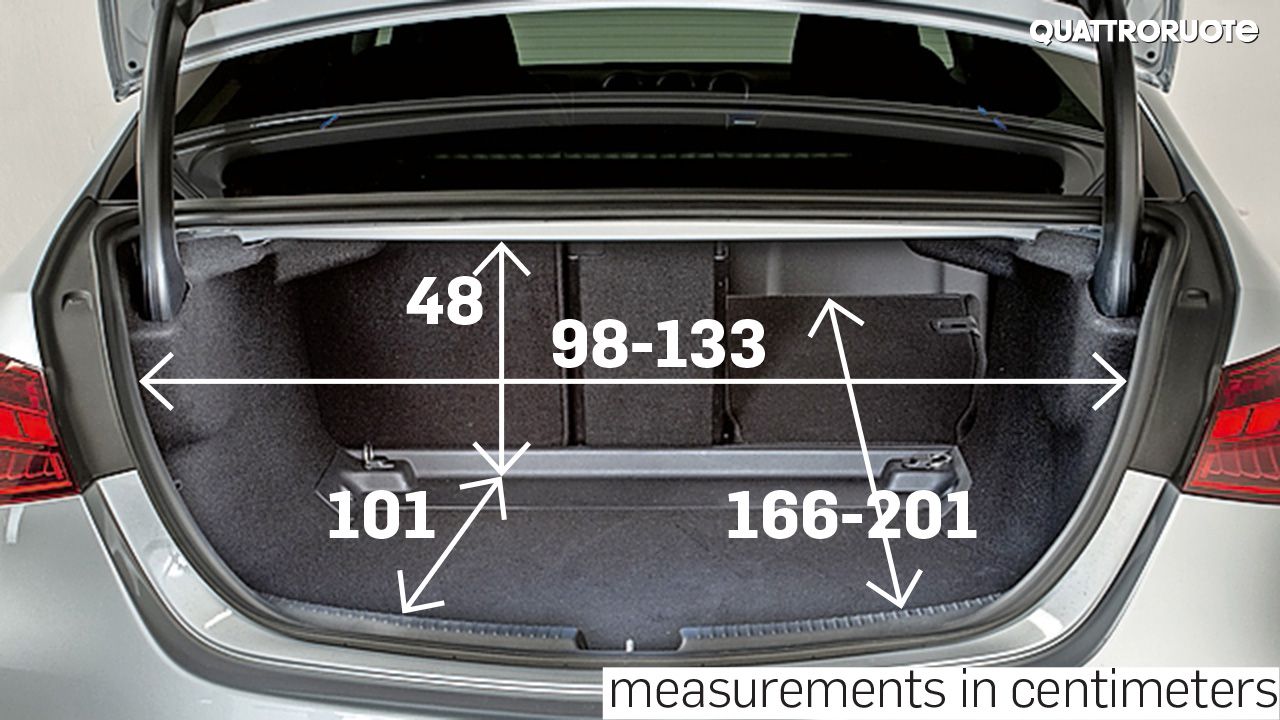