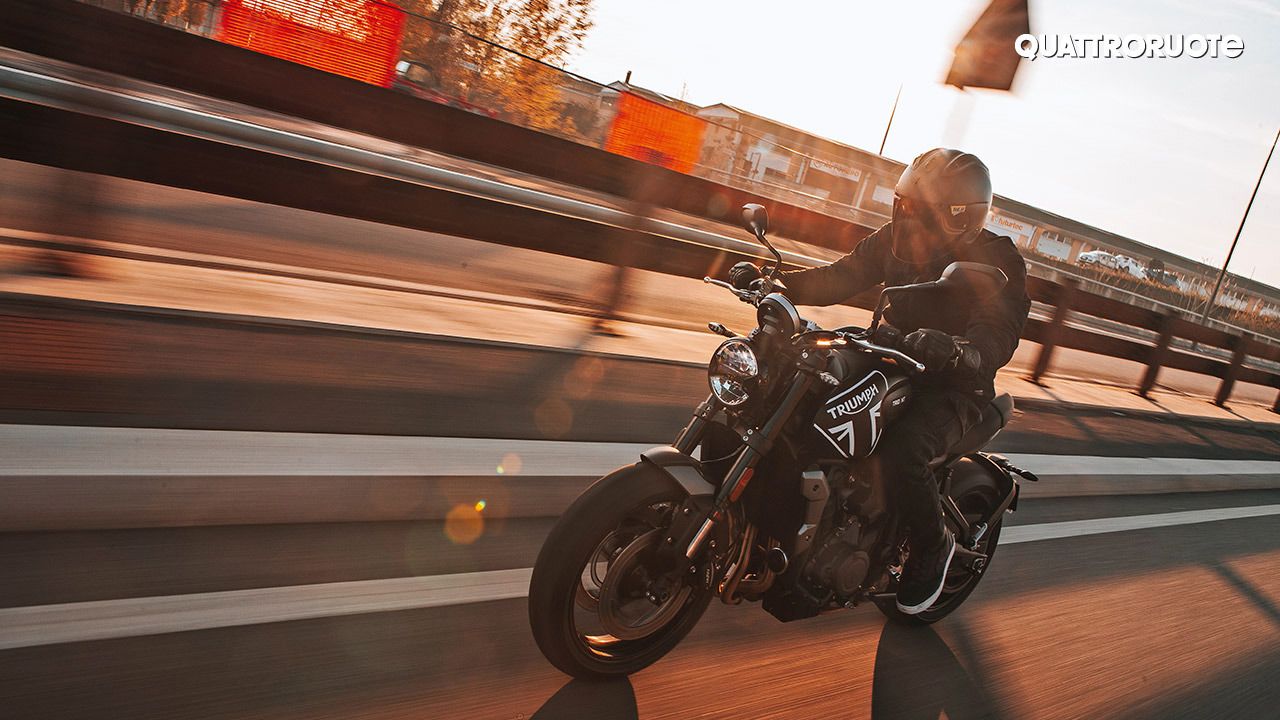 The most affordable ‘Triple’ from the house of Triumph is all set for its arrival in India. But before it hits our shores here, we managed to taste its subdued goodness.

Those entry-level big bikes of the past no longer exist. Basically, bikes with medium displacements, good for taking the first step into the world of powerful two wheels, were not only often unattractive but also didn’t offer much in terms of performance. So, after testing the new Triumph Trident 660, we realised that it’s time to find a new definition of an entry-level ‘big’ bike.

Times Change (for the better)

Triumph has repeatedly reiterated that its new offering is not a compromise of any sort but a real motorcycle not only for those who want to get back on the saddle after a while but also for those avid motorcyclists who want a relaxed and affordable ride. Now, the Trident 660 is undoubtedly much more than an entry-level bike – a fact that is effectively evident from its captivating design, which also reflects the taste of the Italian designer Rodolfo Frascoli.

The design of this roadster is basically an amalgamation of classic and sporty shapes, which looks really nice and gritty. With a round headlight and a single instrument cluster, comprising an LCD and a colour TFT display, it looks modern and retro all the same. And the optional package allows you to pair the bike with your smartphone for a whole lot of functions – from music and calls to turn-by-turn navigation, all of which can be accessed via handy controls. 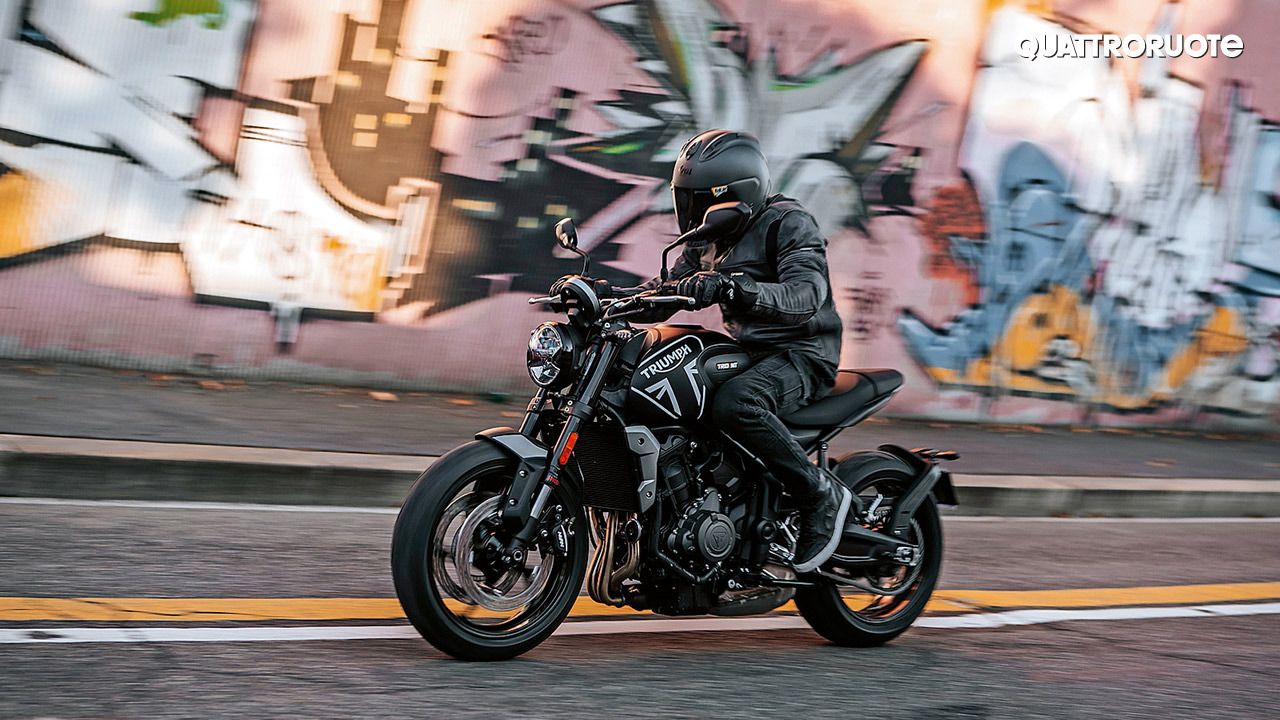 And the perfect ‘English-Style’ tank and a short tail, along with a wide and comfortable seat at only 805mm of height, completes the picture in a way that couldn’t have been better. Wide handlebars and foot-pegs are properly spaced for a comfortable riding position, which allow you to ride the bike at ease.

But the real test of a bike is in the way it rides, so let’s fire up its ‘triple’ and find out how this British roadster behaves on the road. The 660cc engine is the same as the one in the Street Triple, but it has been heavily revised (67 components have been changed) to deliver 80bhp at 10,250rpm and 64Nm at 6,250rpm, which is available for over 90% of the rev-range.

In fact, it’s precisely this extraordinarily flat torque curve that is the secret of the Trident’s extremely pleasant ride. Just a few kilometres on this brilliant machine are enough to realise that this English roadster is easy and intuitive, with an engine response to the ‘ride by wire’ throttle that is always quick and precise. 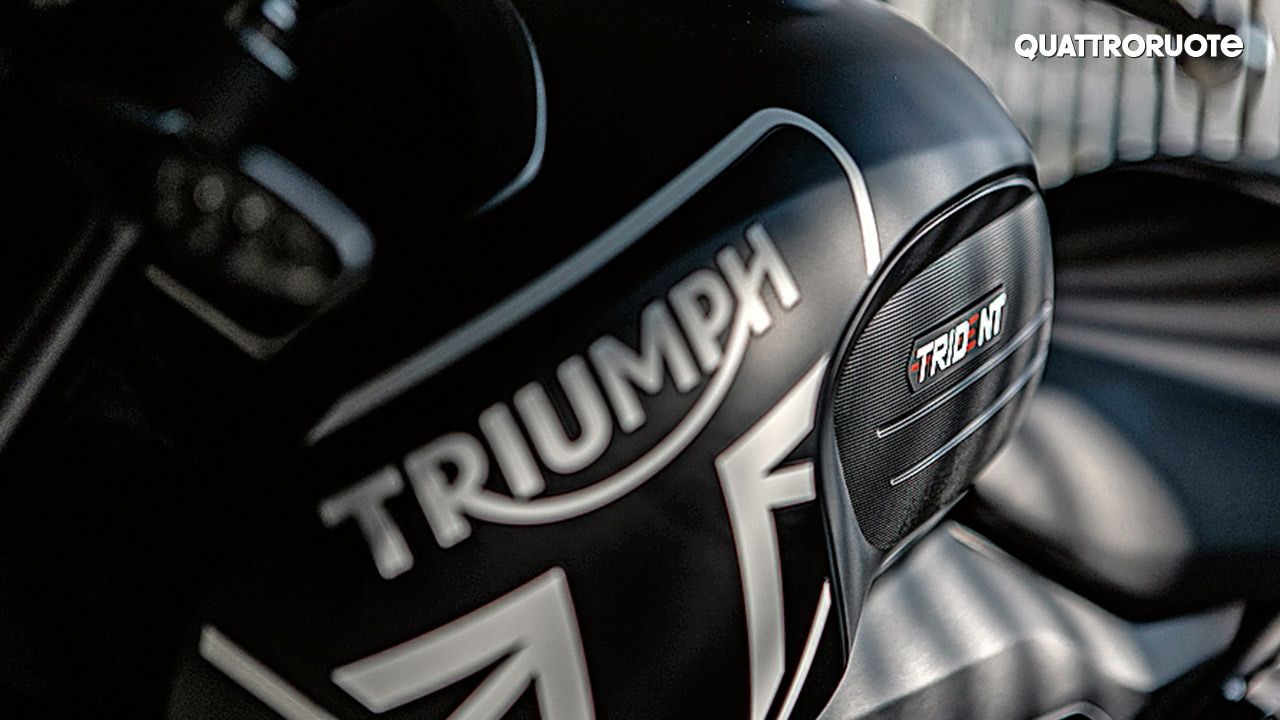 In higher gears, the Trident picks up without any hesitation, even at low revs, with a very wide rev-range – from just over 3,000rpm to 9,000rpm. Post that, it’s better to engage the next gear, since the top-end is not that juicy like that of the Street Triple. What’s interesting here is that the English three-cylinder reaches the limiter without ever showing shortness of breath, which hints towards its kinship with the triples of the sportier versions of the Triumph brand. The only problem is that you can feel some vibrations through the handlebars at high revs.

The gearbox and ratios are perfect. It’s really a pity that the quick-shifter is offered only as an option because it’s one of the most pleasant things to use in a Triumph bike.

The chassis of the Trident 660 features a Showa suspension package, which does its best to make the Trident effective between bends. The turn-in is quick and precise, and it follows the intended line diligently. It’s quick but never nervous in changing directions. Perfectly in line with the characteristics of the Trident is the original Michelin Pilot Road 5 rubber, which proved to be at ease in the various weather conditions and temperatures during our test. 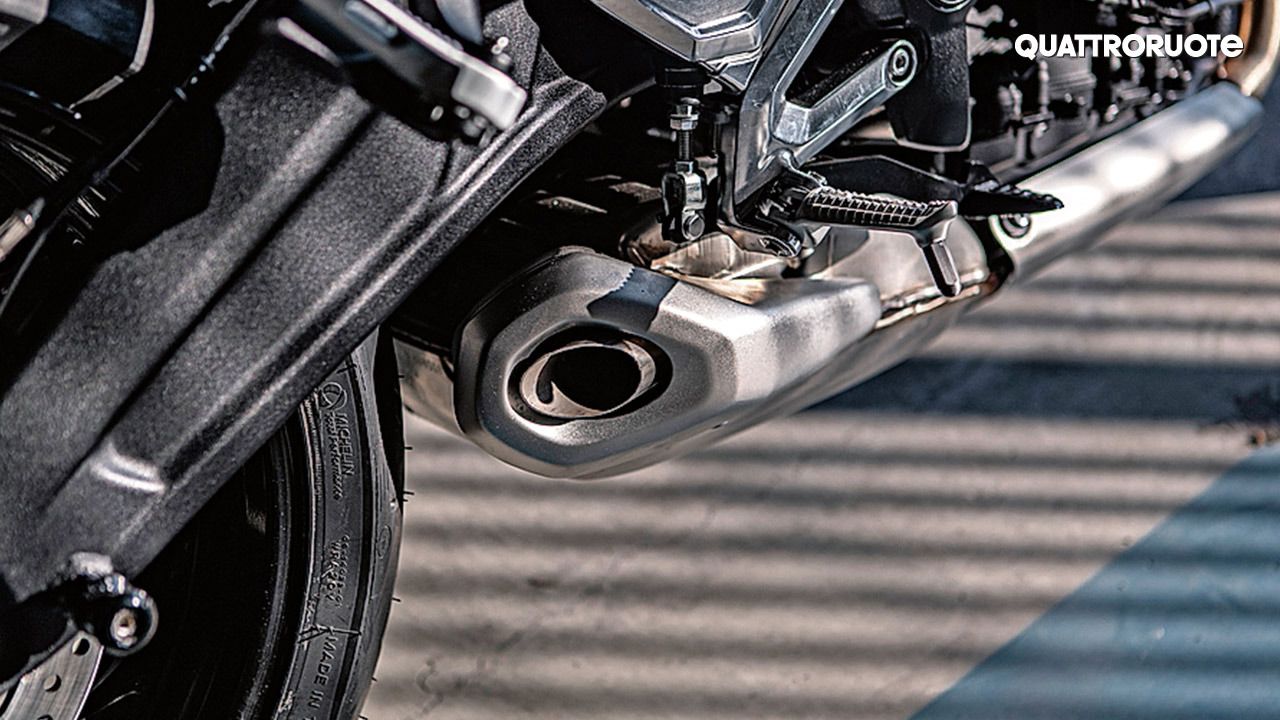 This roadster, then, is perfect for long rides on curvy roads, maybe even with a passenger on board, since the pillion comfort is more than decent. Add to that the fascinating soundtrack of the short under-swept exhaust, which preserves the unmistakable sound of the English triple, and what you have is a perfect English roadster.

The electronics, which are less sophisticated than the Street Triple but better than what the competition offers, is not something that invites criticism. The traction control, which can be disengaged, has intervention thresholds, which are automatically set according to the mode you select – Road and Rain. And the ABS never unexpectedly intervenes, or at least it didn’t during our test. 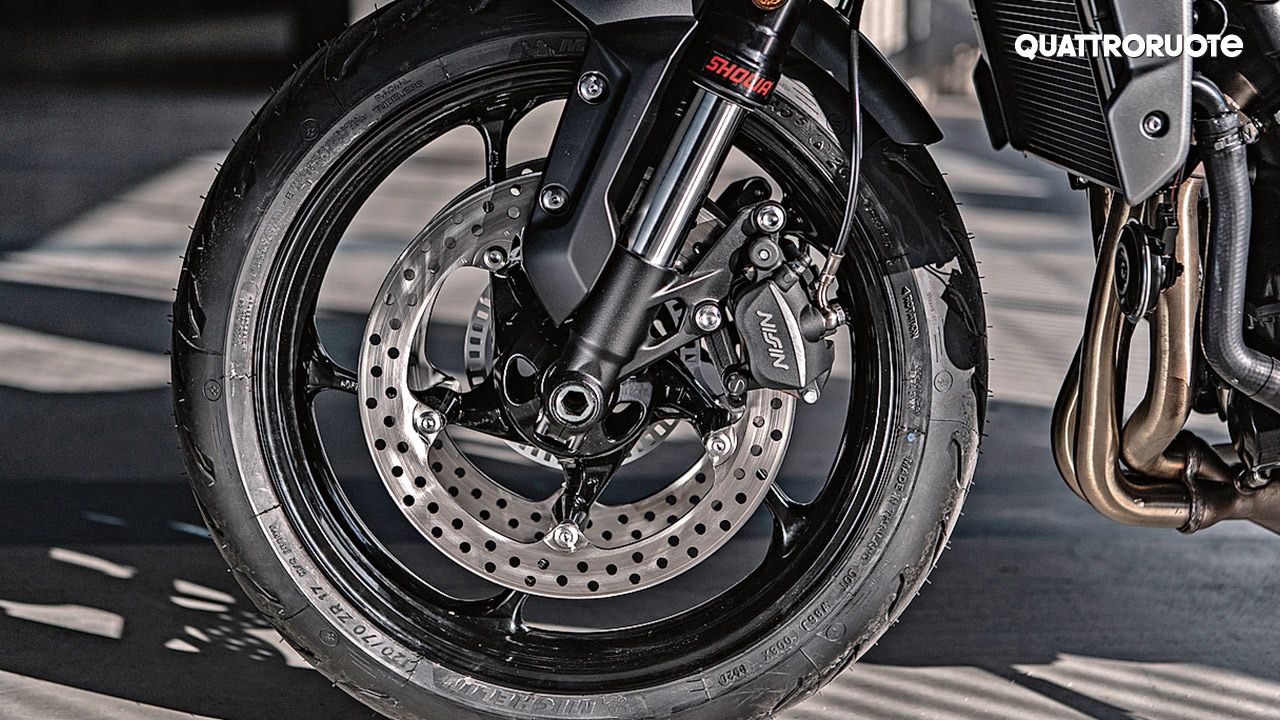 Now, I think, it is as good a time as any other to tell you that if you get too carried away with aggressive riding, the response of the bike becomes a bit vague, with the non-adjustable fork showing signs of fatigue under hard braking. Triumph’s decision to adopt traditional axial callipers seems to be in line with the nature of the Trident. And even though they offer good performance, they don’t have the same bite of radially-mounted callipers. 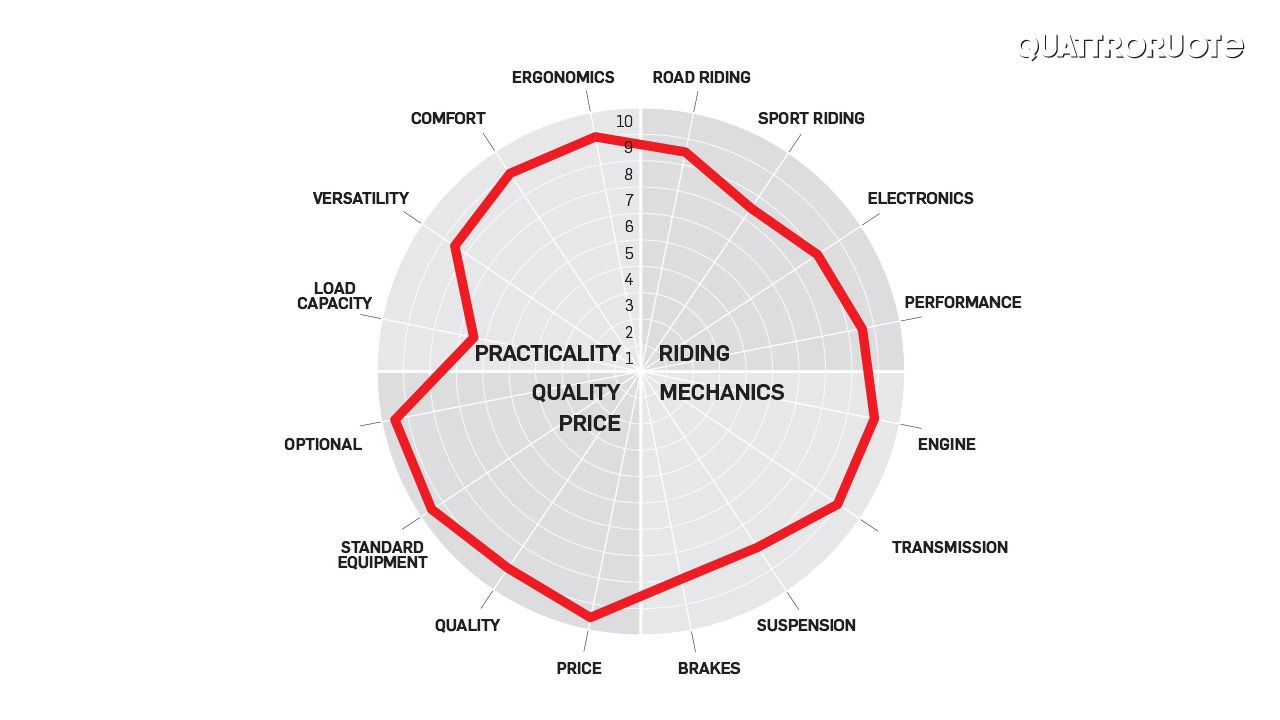 The Trident 660 is a new and eagerly awaited model, which will satisfy a very wide range of customers, thanks to its dynamic qualities, fascinating look, subdued performance, and high levels of finish and build quality. The mechanical parts and equipment are as good as motorcycles from higher segments. And with a price of 8,125 euros and running costs that are amongst the lowest in its category, this Triumph knows how to speak to both the heart and the head at the same time. 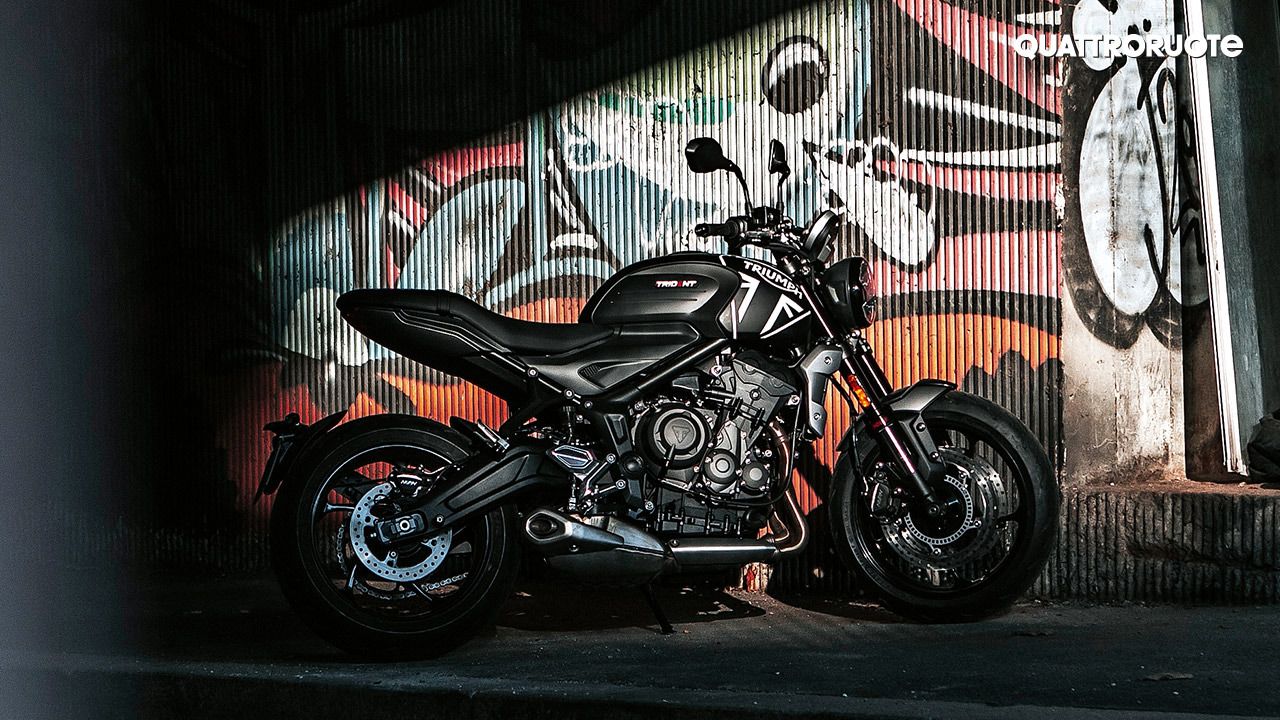 Attention to detail
Above: the Trident 660 in profile. Below: the practical push-button panel that controls the dual LCD (upper) and TFT (lower) display, the latter can be connected to a smartphone. 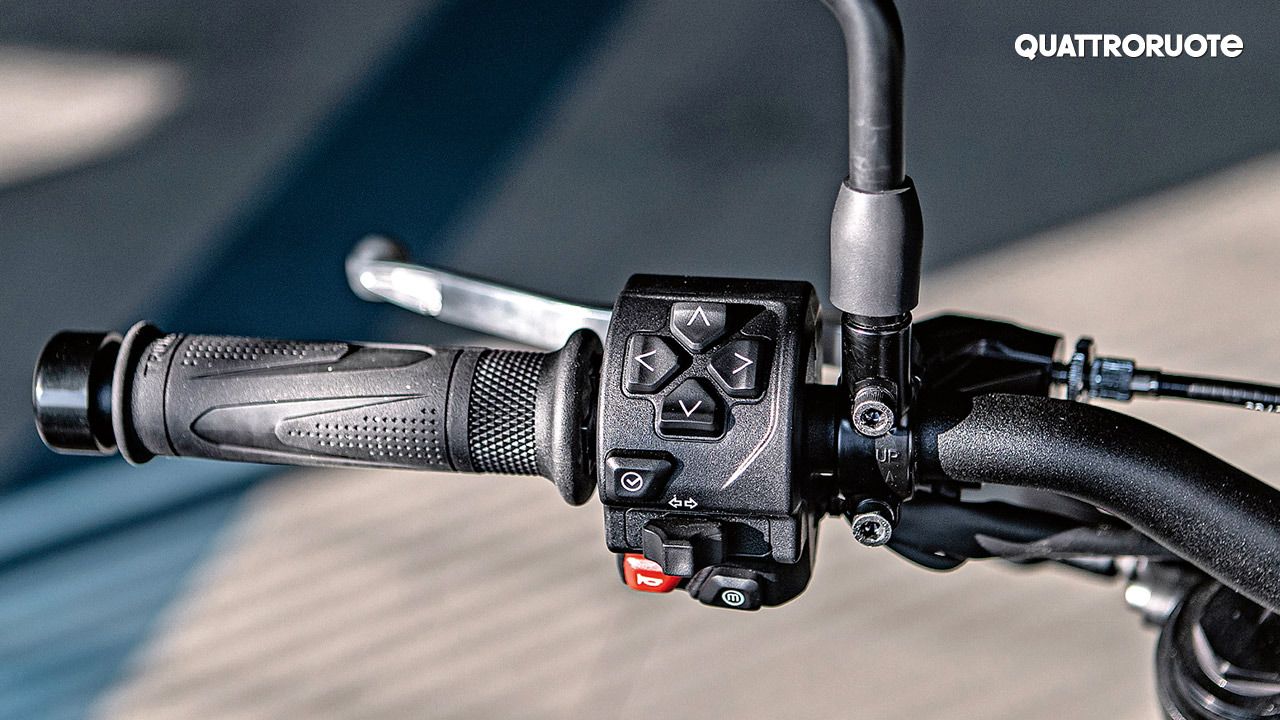 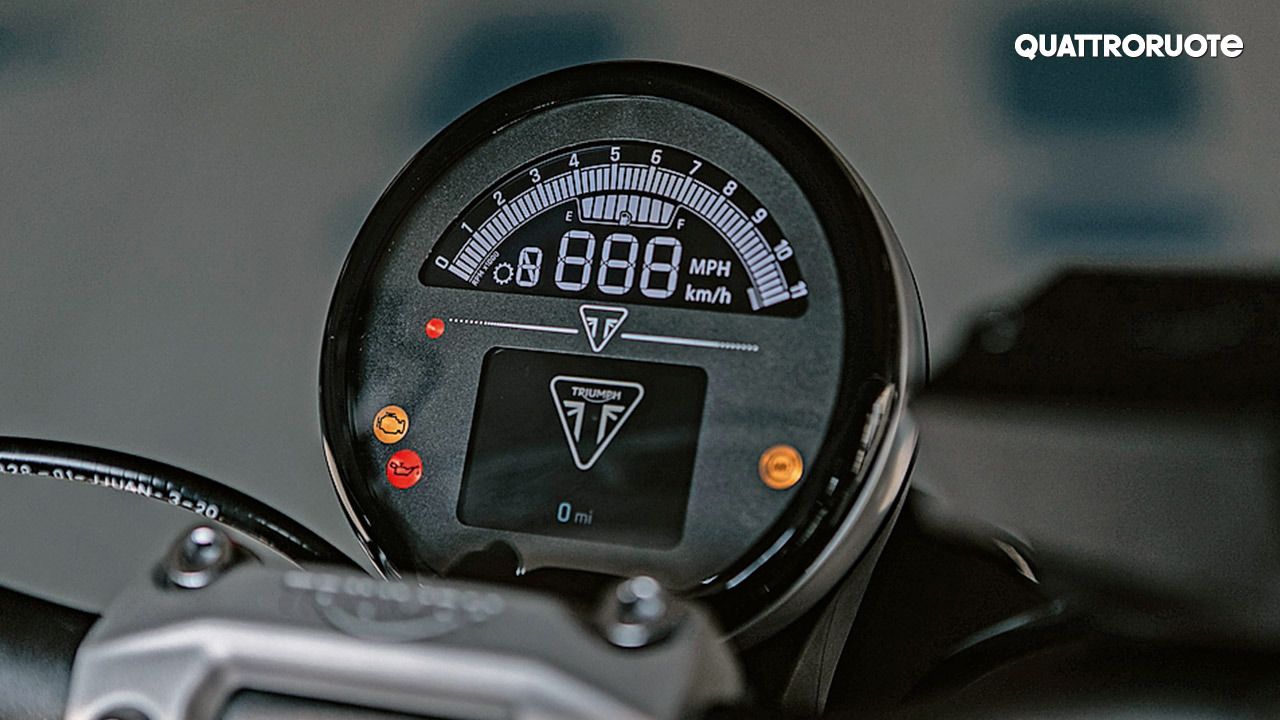 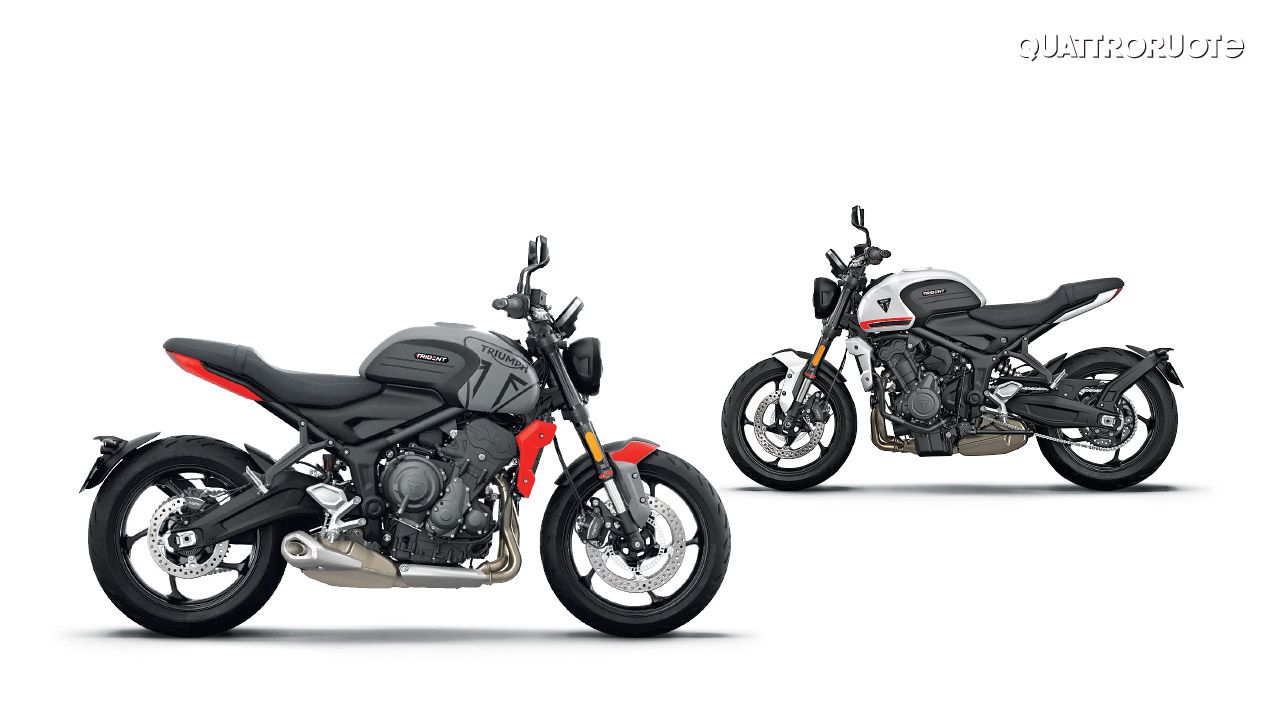 The touch of...
The four colour options which the Trident will be launched with are also understated yet original.