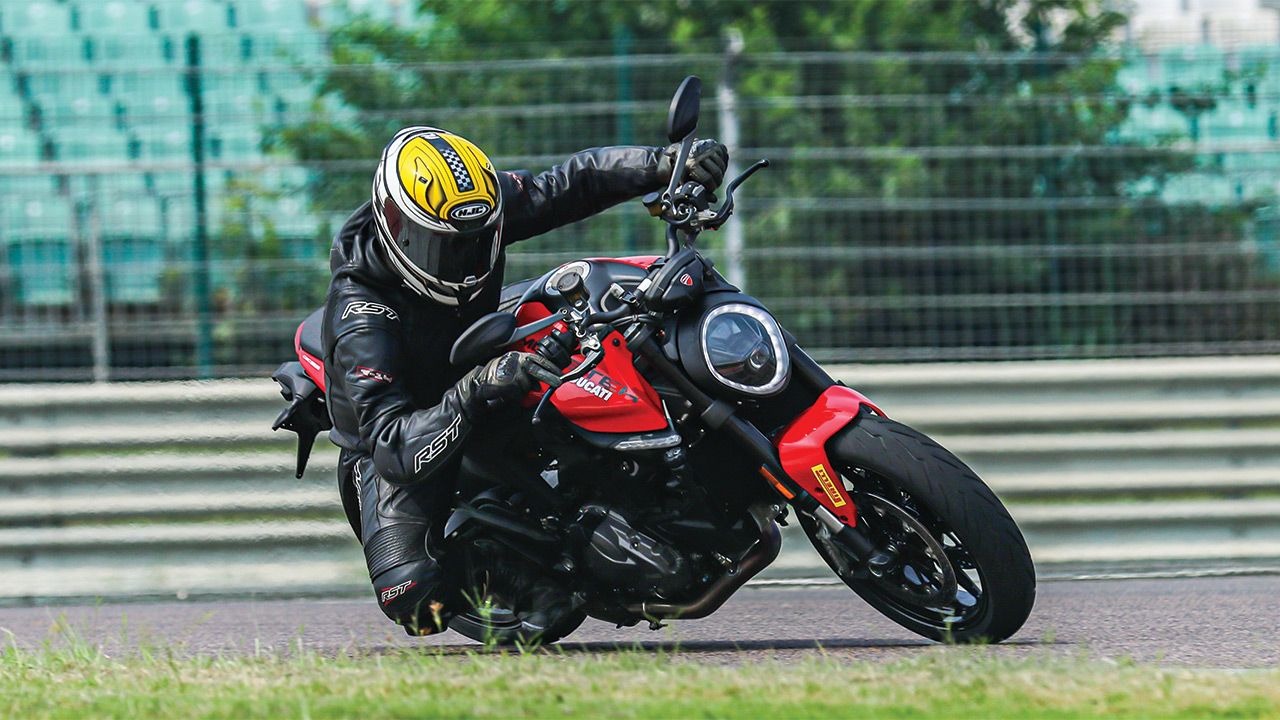 The all-new Ducati Monster is a bit of a rebel. And this devil-may-care attitude is causing it to break with tradition. Here’s why you should care.

When Ducati dropped the veil on the all-new Monster late in 2020, it had the Ducatisti all riled up. Why? Because the latest version does away with the iconic trellis frame – a tradition that had been kept alive by every iteration of the Monster since the original in 1992. This, of course, had the critics and Monster aficionados up in arms and caused quite the hue-and-cry. The cynics say that the fourth-gen model no longer has the Monster DNA and that Ducati has lost its marbles.

You can’t blame the fans – or critics – for having an opinion. See, the thing that you’ve got to understand is that the Monster is Ducati’s biggest cash cow in history. In the last three decades, they’ve shipped over 350,000 units around the globe. So, if there’s one product that the company couldn’t mess about with, it was always going to be the Monster. That being said, I don’t think anyone should make the mistake of forming an opinion on the new Monster without experiencing the changes. The reason I say this is because I’ve had the opportunity to test the all-new Il Mostro at the Buddh International Circuit, and I believe it’s a… – wait – why not read the full story to find out? 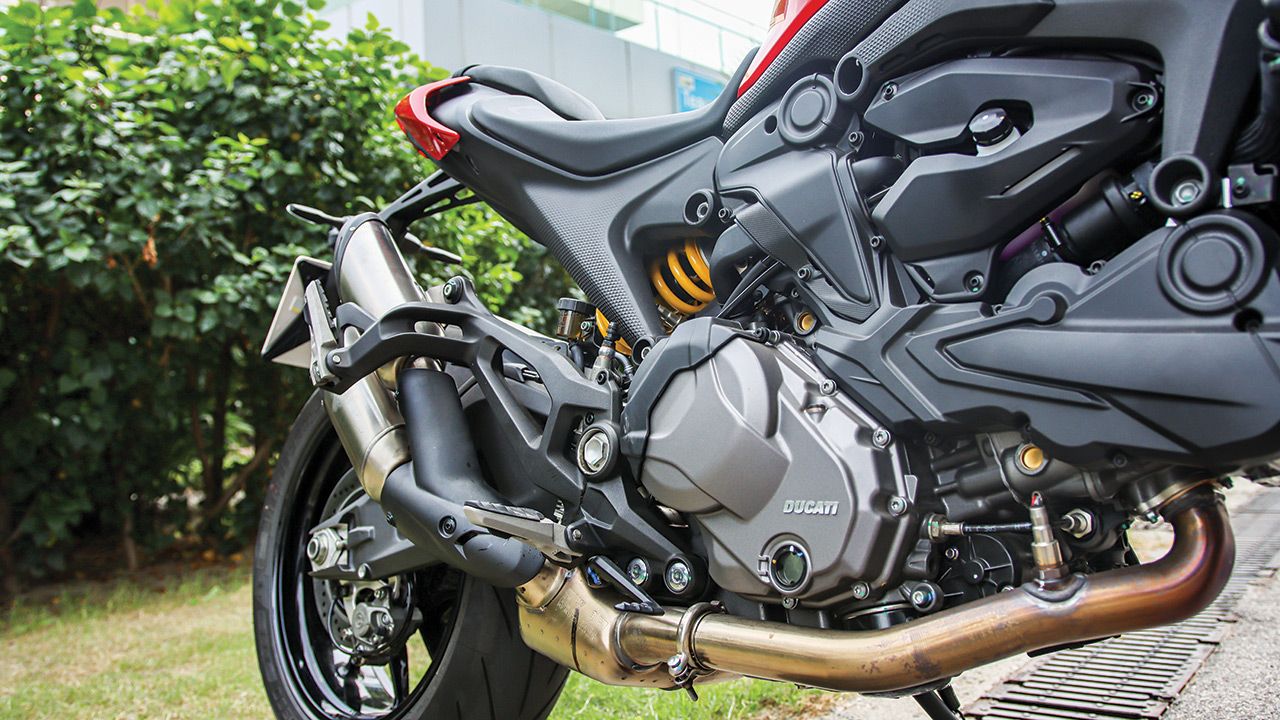 Necessary Evil
The outgoing Monster 821 was old, heavy and outdated. It was a lovely motorcycle, but in the face of fresher competition – Triumph Street Triple R, BMW F900R, et al – it felt a bit last week. With the all-new Monster, Ducati had a two-fold task. First, make it as exciting and modern as its rivals. Second, don’t lose the Monster DNA. So, have they done what they set out to do? Well, quite simply, the answer is a big and resounding YES!

The biggest change is that it’s ditched the iconic trellis frame of its forefathers. In place of it, the Monster now gets a Panigale V4-inspired aluminium front frame. Of course, with no exposed trellis frame, there’s a bit of an identity crisis going on here, as the bike also looks leaner and not as unique as its predecessors. It doesn’t look ‘big’ or imposing, but if you stop comparing it with its old self, you’ll find that the new Monster is quite sexy in its own right.

Be it the chiselled ‘bison back’ shaped fuel tank with integrated indicators, the LED headlamp, the stubby twin-exhaust pipes, or its petite dimensions, the Monster cuts a sharp and sensuous figure. Not only that, thanks to the new frame, the Monster has achieved some serious weight savings. The whole frame weighs just 3kgs, making it 4.5 kilos lighter than the 821’s trellis frame. If that’s not enough, the new Monster weighs 18kgs less than the outgoing Monster 821 and tips the scales at just 166kgs (dry). You do also get a Panigale-like 4.3-inch full-colour TFT display, which definitely bumps up the premium quotient of the motorcycle. Not to mention that the switchgear and paint quality are as impressive as you’d expect from an exotic bike maker.

All in all, the new Monster isn’t a bad or boring looking machine, but then it doesn’t have the same unique or charismatic elements as its predecessors. However, you’ve got to understand that losing the iconic trellis frame was a necessary evil to take the fight to its mighty rivals. And if you think Ducati should have stuck to its old identity, well, then you’re missing the forest for the trees. 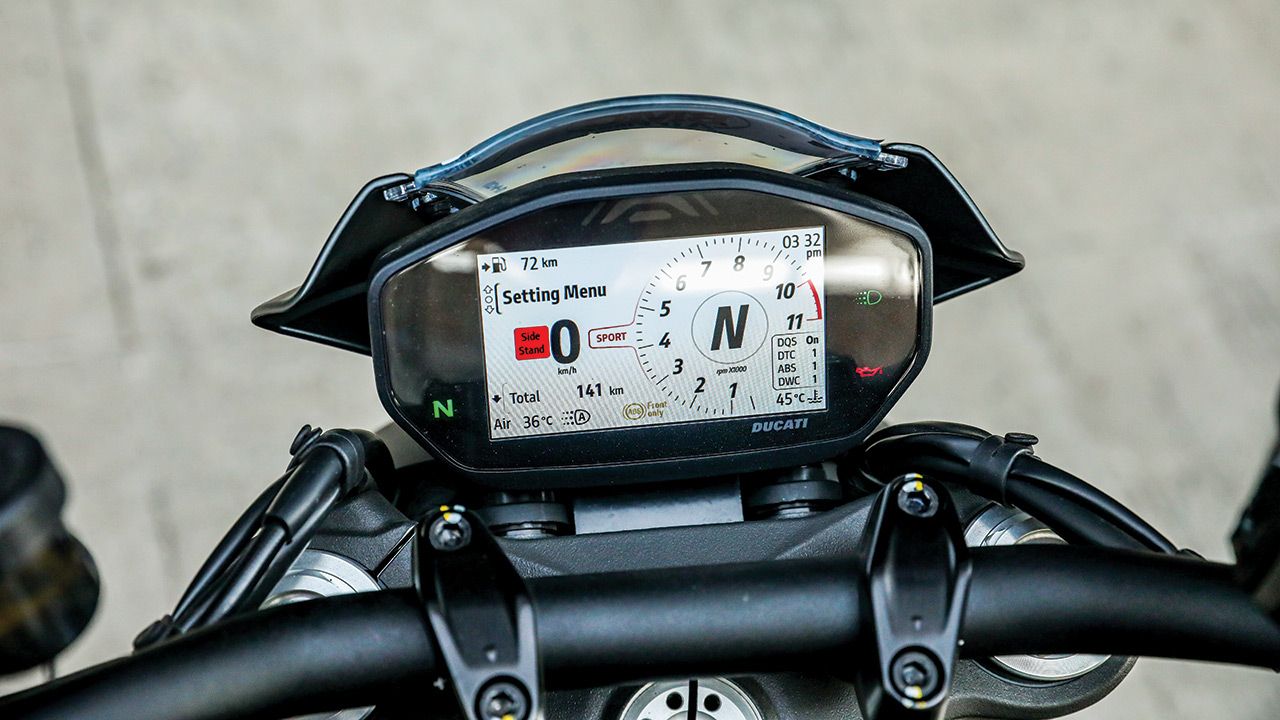 Blood & Thunder
Apart from a new frame, the other big change is the change of heart – and this is something that the naysayers should appreciate. The Monster is now propelled by the same 937cc Testastretta 11° L-twin engine that does duty in the Supersport 950. The motor pumps out 109.4bhp at 9,250rpm and a twisting force of 93Nm at 6,500rpm – these numbers mark an improvement of 2bhp and 7Nm over the 821’s engine. But do also remember that it’s a much, much lighter motorcycle – something that’s quickly evident when you take it out for a spin.

Right off the bat, the Monster’s powertrain feels naughty and more willing to play along than before – it produces a deep rumble and has a unique and distinctive firing order. On the go, it’s simply vicious. The engine pulls like a locomotive, and since the Monster has shed so much of its fat, it’s much, much quicker than its predecessor. Even the fuelling is smooth, and it no longer feels jerky or abrupt at mid-revs – which was something that was quite apparent in the old motorcycle as soon as you would hit 4,000rpm. This one in comparison feels smooth all the way to the redline. There’s a sense of fluidity in the way it delivers the grunt as you open the throttle, thereby, making it tractable and ever-ready to shoot forward as soon as you unleash its horses. I couldn’t really find any flaw with the motor – but if I had to nit-pick, I’d say that it’s a bit gruff at low rpms. Mind you, this criticism can be dismissed by simply saying it’s the ‘character’ of the V-twin engine. 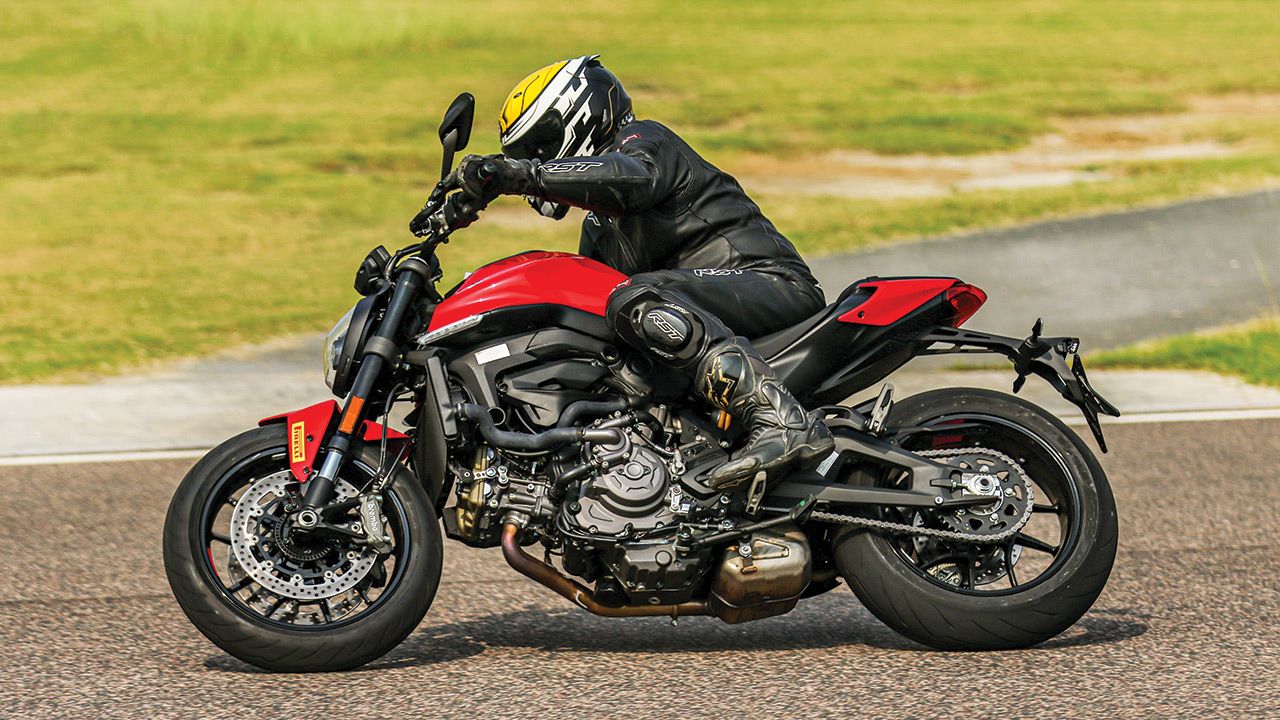 The other thing that left me mighty impressed was the Monster’s electronics. We know Ducati has a knack for pushing the boundaries in this department, so, with the Monster, they haven’t left any stone unturned. You’ve got three riding modes – Sport, Urban, and Touring – while you also get cornering ABS, traction control, launch control, and wheelie control. All of these can be configured to different levels of intervention. No matter what mode or settings you chose, you can trust the electronics to allow you to save face every time you do something stupid. And it does this in the most cossetting manner. The quick-shifter is also well worth a mention – it makes life so easy and effortless when you’re chasing a hot lap time.

If I had to pick one thing that I loved about the Monster, it’s got to be the handling. Gone are the days when the Monster would feel heavy, cumbersome, and slow around corners. This new one, thanks to the new frame and suspension (non-adjustable 43mm upside-down front forks and a pre-load adjustable rear mono-shock), turns and changes direction like a superbike! It no longer feels top-heavy like the Monster of yore. There’s a newfound eagerness from the chassis and suspension that makes it silly fun to throw around the twisty stuff. What restricts you from going all out is perhaps its road-focused ergonomics and ultra-quick steering (tighter rake, shorter wheelbase) that makes it feel twitchy during quick direction changes. Thanks to its dual 320mm front discs, coupled with radially mounted Brembo M4.32 4-piston callipers, shedding speed is another area where the Monster excels. The grip from Pirelli Diablo Rosso III tyres is also phenomenal.

On the dynamic front, especially at a racetrack, the Monster feels light years ahead of the old 821. It’s just so much more engaging and alive between your legs that you can’t appreciate the changes enough. The Monster is truly transformed, and for the better. 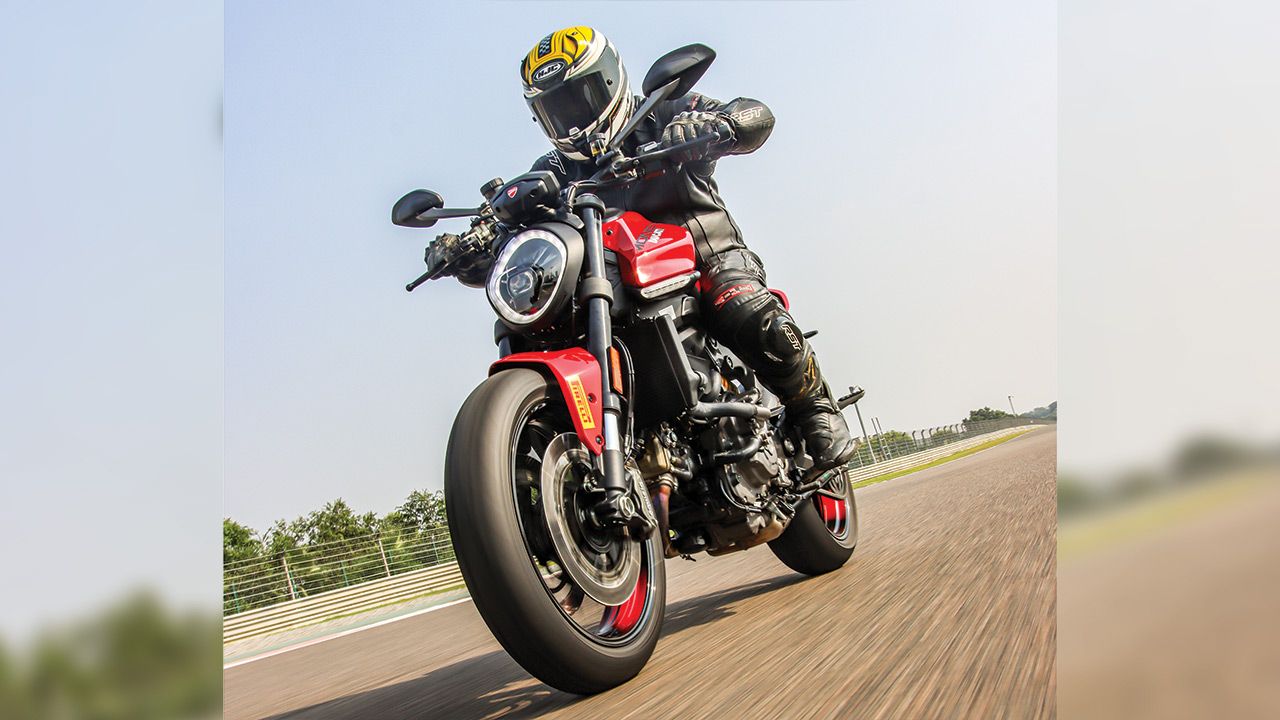 Verdict
Even though the Monster has a storied past, I’ve never really enjoyed the old versions. They looked phenomenal, yes, and they came with that novelty factor, but they never spoke to me in the same way that other Ducatis did. Now, though, all that has changed. Ducati has brought the Monster in line with the rest of the range – it’s sharp, modern, exciting, and desirable. Sure, it’s a bit expensive compared to its rivals, but then it is a Ducati, and that means it’s just that little bit more evocative than its contemporaries. And if you’re still discounting the new Monster because of the demise of its trellis frame, well, the loss is truly yours.

X-Factor:  The new Monster is light, agile, and quick as a wink!