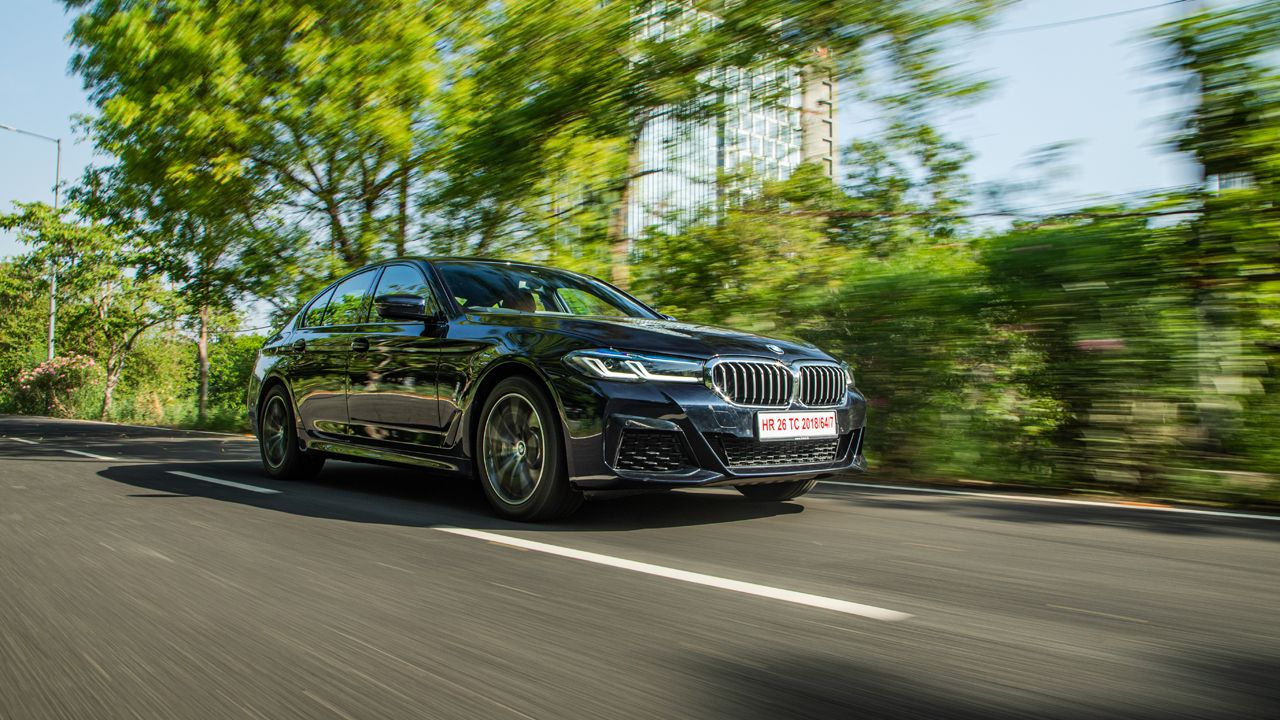 In the face of growing competition, BMW has given the 5 Series a nip-and-tuck job. But how could you better something that’s already perfect?

'If it ain't broke, don’t fix it' springs immediately to mind the moment you lay your eyes on the 2021 BMW 5 Series. You see, the current-gen 5er is one of the best-selling models for BMW in India and around the globe, which means that there obviously was no need to do anything revolutionary in terms of updating the outgoing version. So, it makes sense, then, that the new model sports only a bare minimum changes.  And that's exactly what BMW has done - they've retained and refined the good bits of the 5 Series with this update. Plus, it's also been given a nip-and-tuck job in order to enhance its aesthetic appeal.

That’s all well and good. But the important question is whether the 5 Series does anything that’s remarkably different from the outgoing model, or is it the same old fine wine in a new bottle?

As mentioned before, the 2021 5 Series is nothing but a mid-life update; so, it's not an all-new model. In BMW-speak, the new version is called G30 LCI – you will almost certainly see BMW nerds throw around these jargons on the internet very soon. In simpler words, G30 means that it’s the same seventh-gen model of the 5 Series that was launched in India in 2017. LCI stands for ‘Life Cycle Impulse’, which is BMW’s fancy term for a face-lift model. 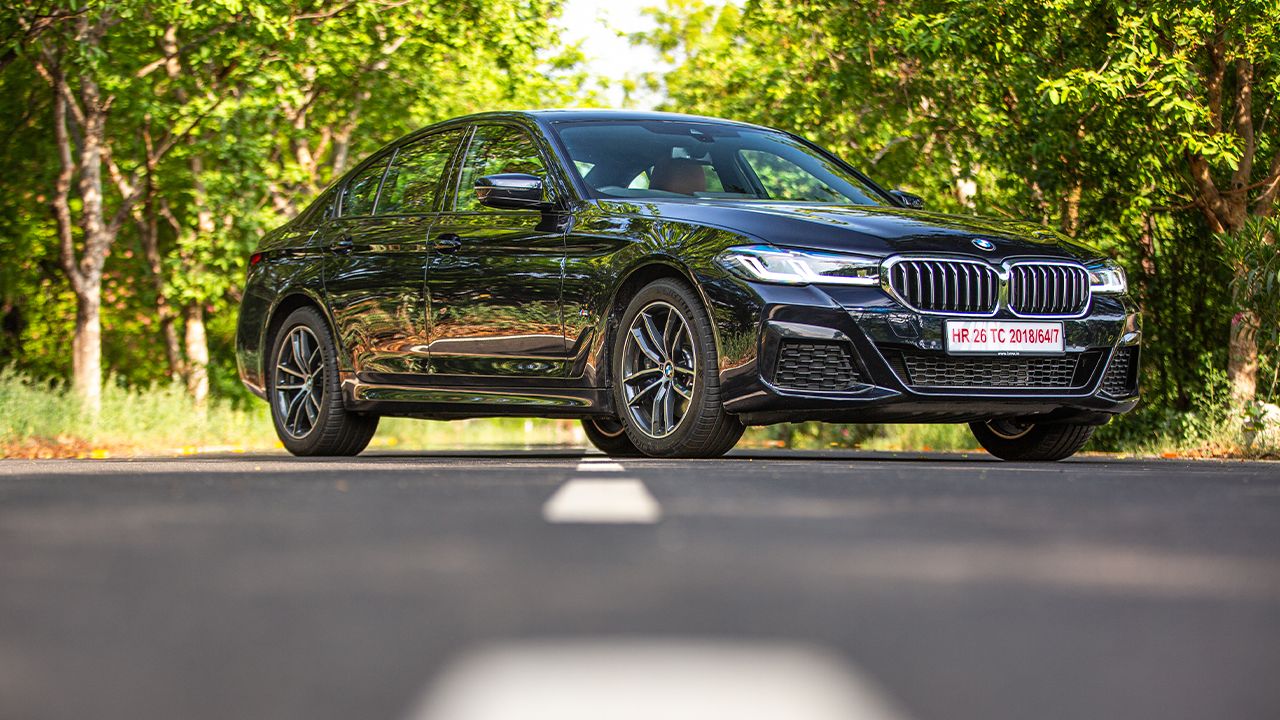 Right from its inception in 1972, the 5 Series, across generations, has always been a handsome looking car; some, however, may argue that the fifth-gen model (E60) was a bit of an oddball. That said, the current 5 Series is probably one of the best-looking BMWs on the market today. And that’s saying something because the styling of recent BMWs is a bit of an acquired taste.

With the update, the 5 Series, says BMW, has been given a focused look. And that’s quite apparent, for the LCI has sharper eyes and comes with Laserlight tech as well as new J-shaped LED DRLs. I, however, still haven’t made up my mind whether I prefer it over the ‘Angel Eyes’ of the outgoing car or not. Moreover, it also gives the front of the car a bit of a Skoda-like appearance.

Overall, the sleek pair of headlights makes the nose appear longer and wider. Apart from that, there’s, of course, a new single-unit kidney grille, which is taller, wider, and much brighter. Thankfully, here it doesn’t look out of place or obnoxious like it does, say, on the new 4 Series. 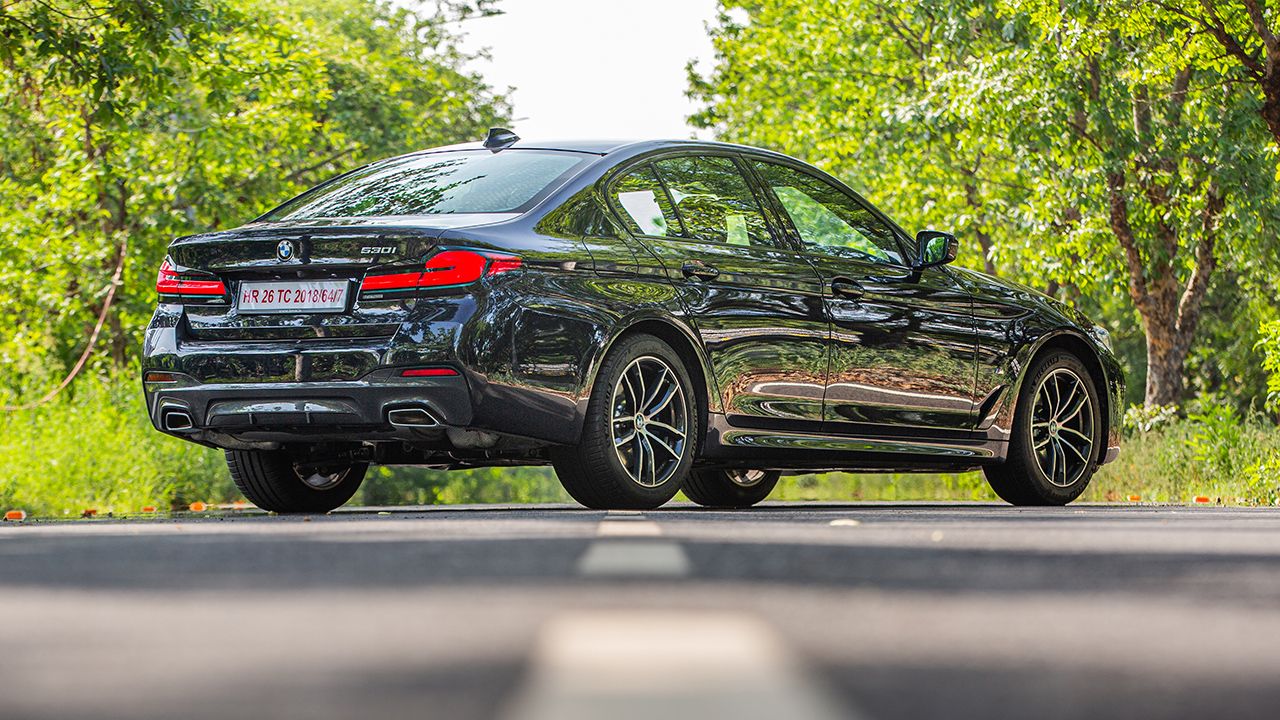 At the back, the lamps have been stretched out and reprofiled. The model on test here is the M Sport variant, equipped with 18-inch M-wheels, M-brakes, M-side sills, and so on. On the whole, the new 5 Series looks sporty and corporate at the same time. It’s like a CEO on Casual Fridays – neat, athletic, and attractive.

Inside, the dashboard design and layout haven’t changed that much. All controls are driver-focused, and everything is a little too familiar to the 3 Series. This also means that it now gets a bigger 12.3-inch touchscreen infotainment system, with BMW’s seventh-gen iDrive system. As always, it’s quite intuitive, crisp, and easy to navigate. The upgraded iDrive system also brings wireless Android Auto connectivity in addition to Apple CarPlay. There’s also gesture control, which I personally find of no real use. And yes, the iDrive system can now receive OTA updates.

Other than that, the temperature controls have been updated, and the centre console now comes with a piano black finish. In the 530i M Sport variant, you get Sports seats at the front with ‘Sensatec’ perforated trim. Like always, the seats are supremely comfortable and sporty – you can set it really low. The rear seat space is decent too – in fact, it’s quite spacious. However, I found it to be more or less similar to that of the 3 Series Gran Limousine (although the 5 gets four-zone air-conditioning instead of the 3’s three-zone). Also, the seating is quite low, albeit the seats are plush and supportive. 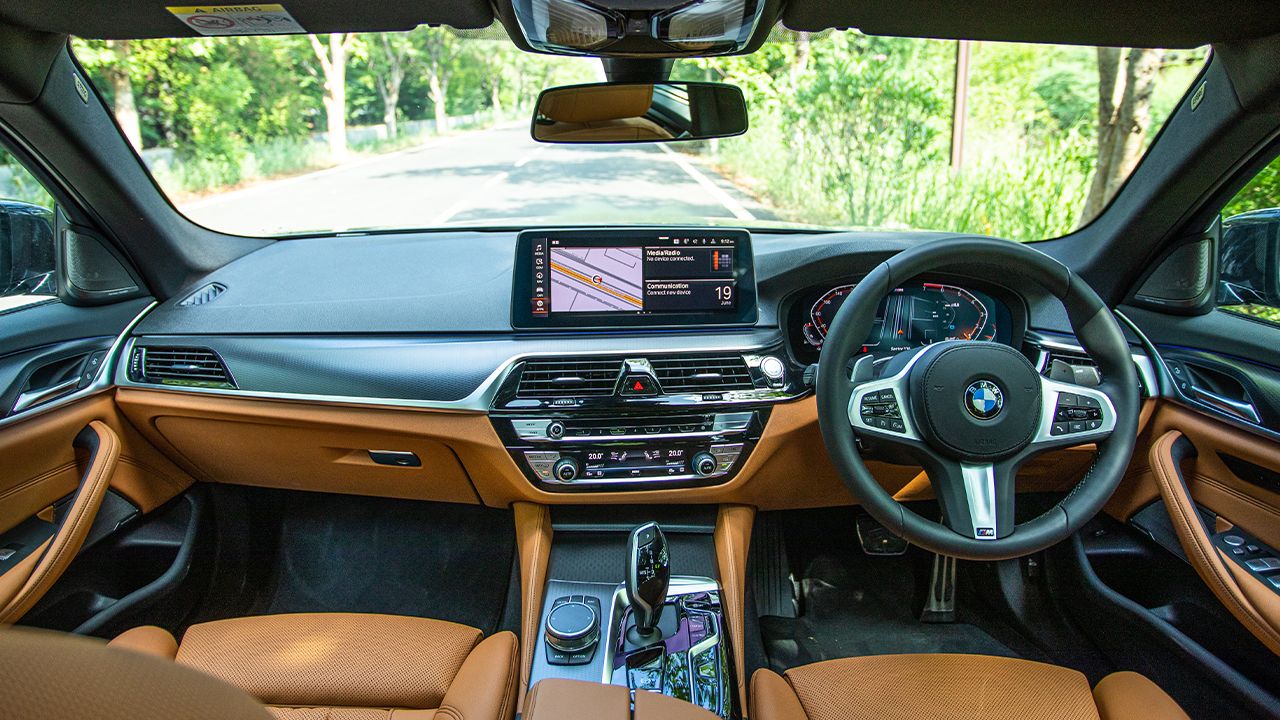 However, don’t expect it to have the Mercedes E-Class’s level of luxury or space inside. With its long wheelbase, reclining seats, and gadgets (Android Tab), the Merc is hands down a more superior car for rear-seat passengers. However, BMW argues that if its customers want even more rear-seat space and comfort, they've already got them covered with the 6 GT. The 5 is supposed to be more driver-focussed.

In the G30 LCI, BMW has introduced a 48-volt mild-hybrid system as standard in all four- and six-cylinder models in global markets. However, it seems that the Indian market has missed out on the tech. This means that we get the same engine options as before – the 520d, 530i, and 530d. The 520d and 530i are 2.0-litre diesel and petrol versions, respectively. The 530d is the range-topping version and features a 3.0-litre six-cylinder diesel. The car that we tested was the 530i.

In terms of performance, there’s nothing surprising in store here. The 530i has the same tried-and-tested 249bhp / 350Nm B48 twin-scroll turbo petrol engine that we’ve already experienced many times before. It’s the same engine that does duty in the 330i, X3, and X4. 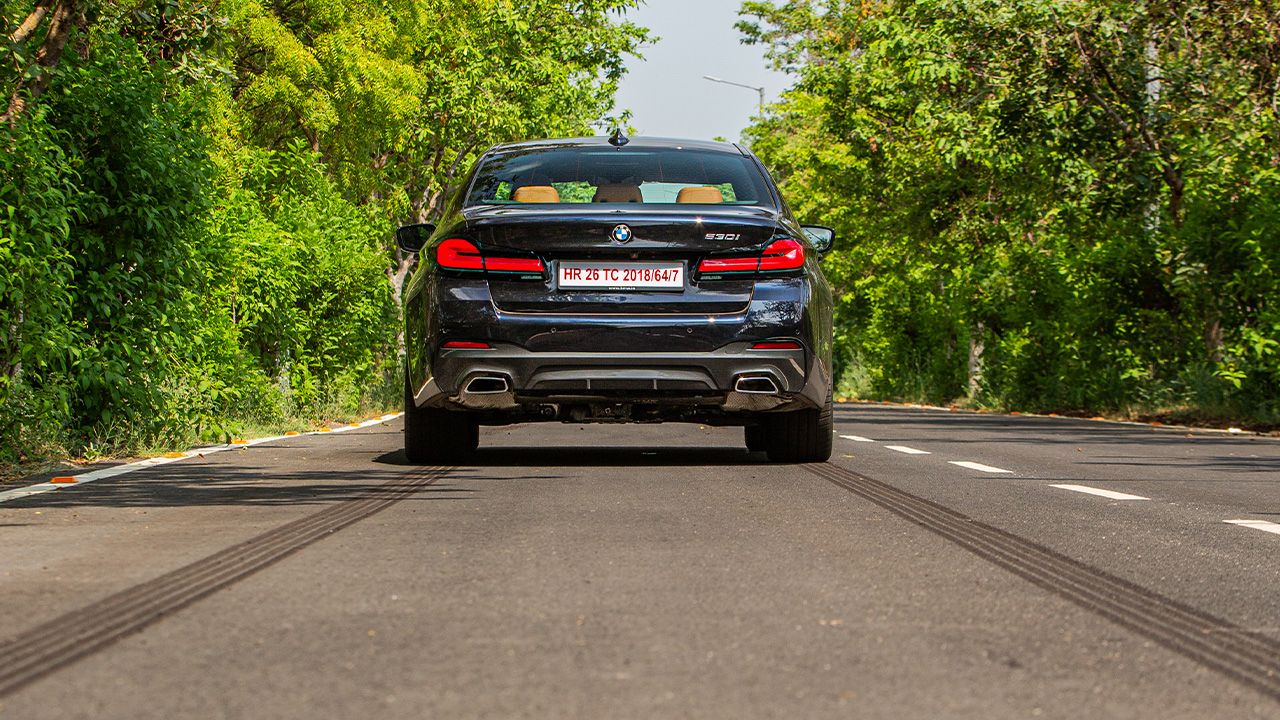 Acceleration is quick but not daunting. The engine seems a bit hesitant below 1,500rpm but post that, there’s a strong surge all the way to the redline. What’s really remarkable about this engine, especially in the 5 Series, is its refinement. At idle or below the speeds of 60km/h, you can’t even hear it hum – it feels as quiet as an electric car! Then there’s the eight-speed automatic gearbox. Frankly, I can’t sing enough praises of this transmission – with its seamless, precise, and telepathic shifts, it’s the best automatic gearbox in the business, period.

The absolute best part of the 5 Series is its ride quality. Bumps and undulations are gobbled up in a very hushed manner. And this is what, I believe, separates it from the 3 Series Gran Limousine. The 5’s ride quality is more mature, more refined, and more comfort-oriented. Of course, it’s also due to the fact that it comes with adaptive dampers, which has two modes – Comfort and Sport. In the former setting, it’s cushy and absorbent, while in the latter, the dampers firm up and allow for tighter body controls. The handling is pretty sharp – the 5 is quite fun from behind the wheel. The steering is direct but doesn’t have much in terms of feedback. All told, if you are looking for a mid-size luxury sedan with a perfect balance between driving dynamics and comfort, I think the 5 Series is still the king of the hill. 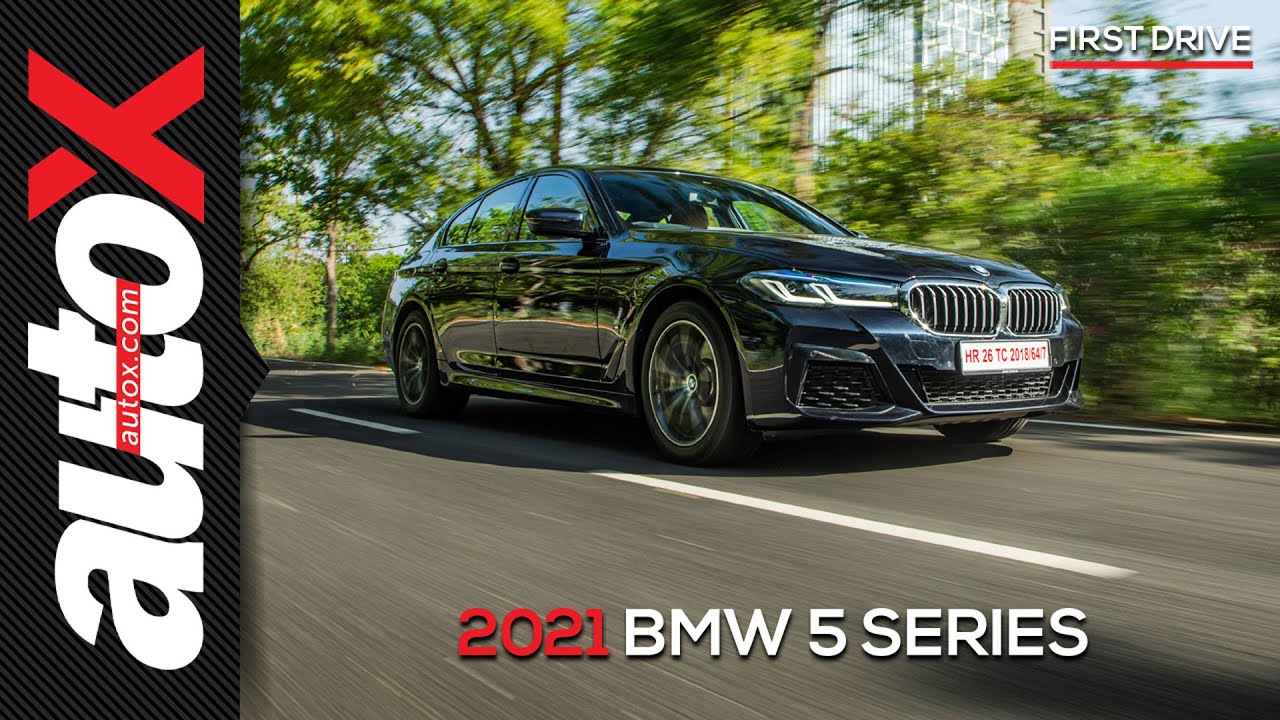 Even though there isn’t anything remarkably new or different about the G30 LCI in comparison to the outgoing car, it is still a solid package. That’s because the old car didn’t have much room for improvement – it was already kind of perfect! That said, BMW has still done a good job by giving the 5 Series a new lease of life in the face of growing competition from its main rivals, especially the E-Class LWB. And while the Mercedes is still the default choice for someone looking for a purely chauffeur-driven luxury sedan, the BMW will continue to attract those high-ranking executives who like to be in control of all the things, all the time.

X-Factor: If you like juggling between the driver’s seat and rear bench in your luxury sedan, the BMW 5 Series is your ideal car.