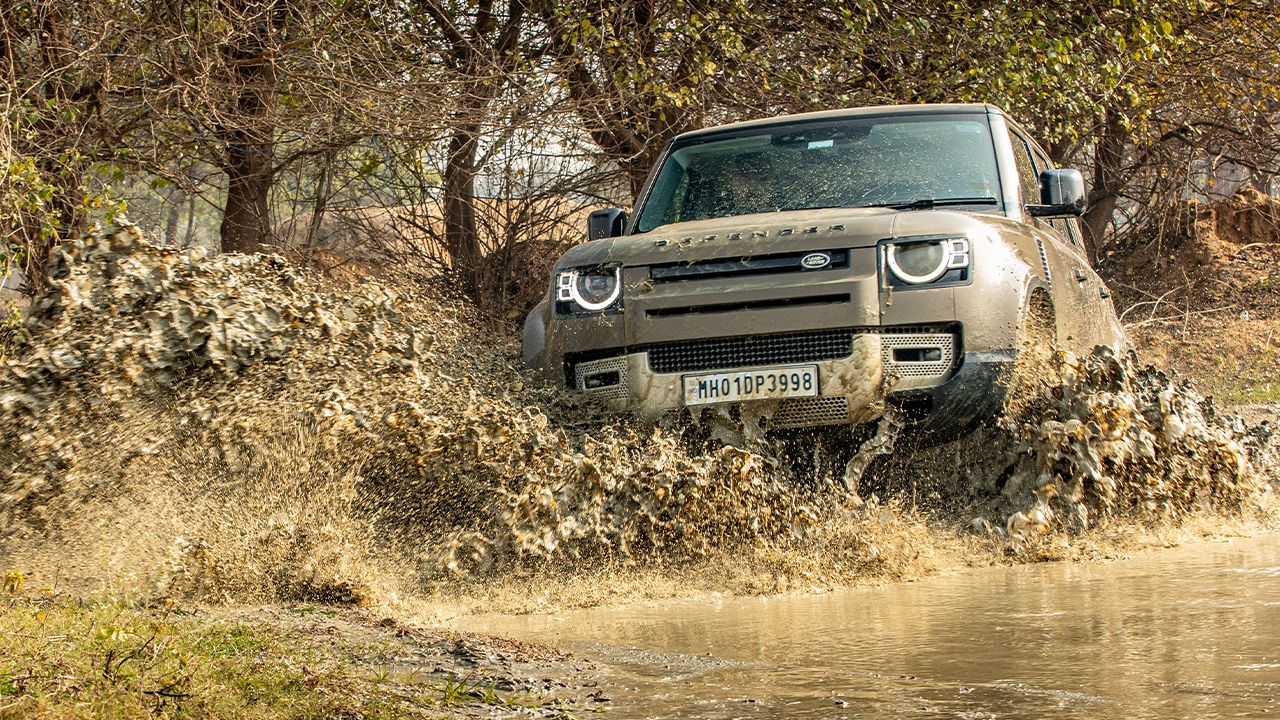 The new Defender has a daunting task of doing justice to the legacy of the old one while establishing itself as a unique and distinct product. Jared spends a day with it to see if it manages to accomplish what it sets out to do.

The new Defender undoubtedly has big shoes to fill, for it aims to replace the older version, which was one of the most adored off-road machines in the world. The only problem is that the very utilitarian reason that made the old Defender so loved and famous also made it difficult to justify buying one. Why? Well, it was like a tank that could do anything, which made it impractical on so many levels.

The new Defender, however, is a lot more functional on the road and, certainly, a lot more comfortable. I spent an entire day with the new Defender to test it from every possible aspect. There are so many things to say about this iconic car, but before we begin, let me just say that this is the most awesome SUV I have ever driven.  The new Defender is the culmination of 70 years of legacy, representing utility and solidity, which truly makes it an advanced SUV of the 21st century. 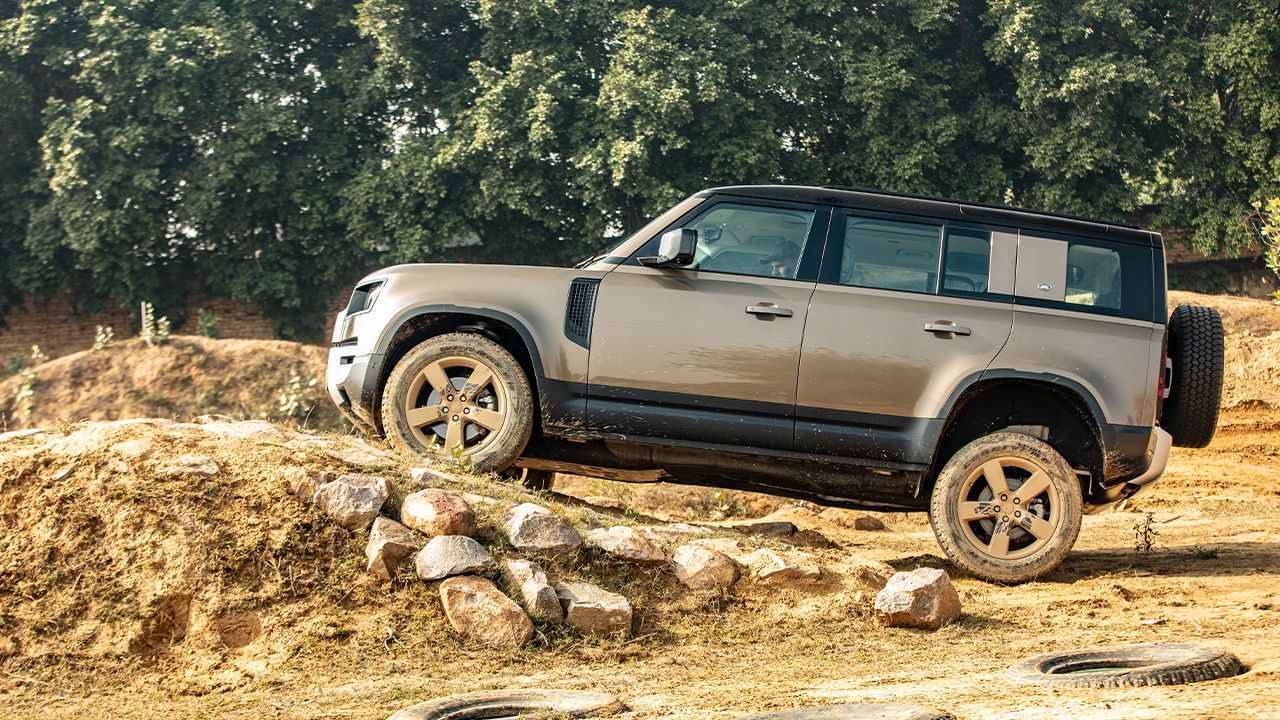 The new Defender is massive. The one we tested was the long-wheelbase five-door version. The three-door version, with a shorter wheelbase, will make its way to India in a few months, but you can book one now. With over five metres of length and a ground clearance of 219mm, which can be raised up to 290mm, the new Defender is a mammoth of an SUV. You literally have to climb up into the driver’s seat when the car is in Off-Road mode, with increased ground clearance.

Now, while the design of the new Defender is not a tribute to the older model, it certainly is inspired by the past. The boxy design and straight lines articulate its purposeful intent, and the new age headlights and funky square tail lights hint towards its modern approach. Its flared wheel arches, with massive 20-inch wheels, make it look muscular, and the dual-tone paint scheme compliments and adds to the overall design and appeal of the car.

It looks big, strong, and rugged – in fact, it is the most intimidating SUV you will see on Indian roads. Land Rover has claimed that the new Defender is the strongest and most capable car it has ever produced, and by the look of it, the claim seems to be true. 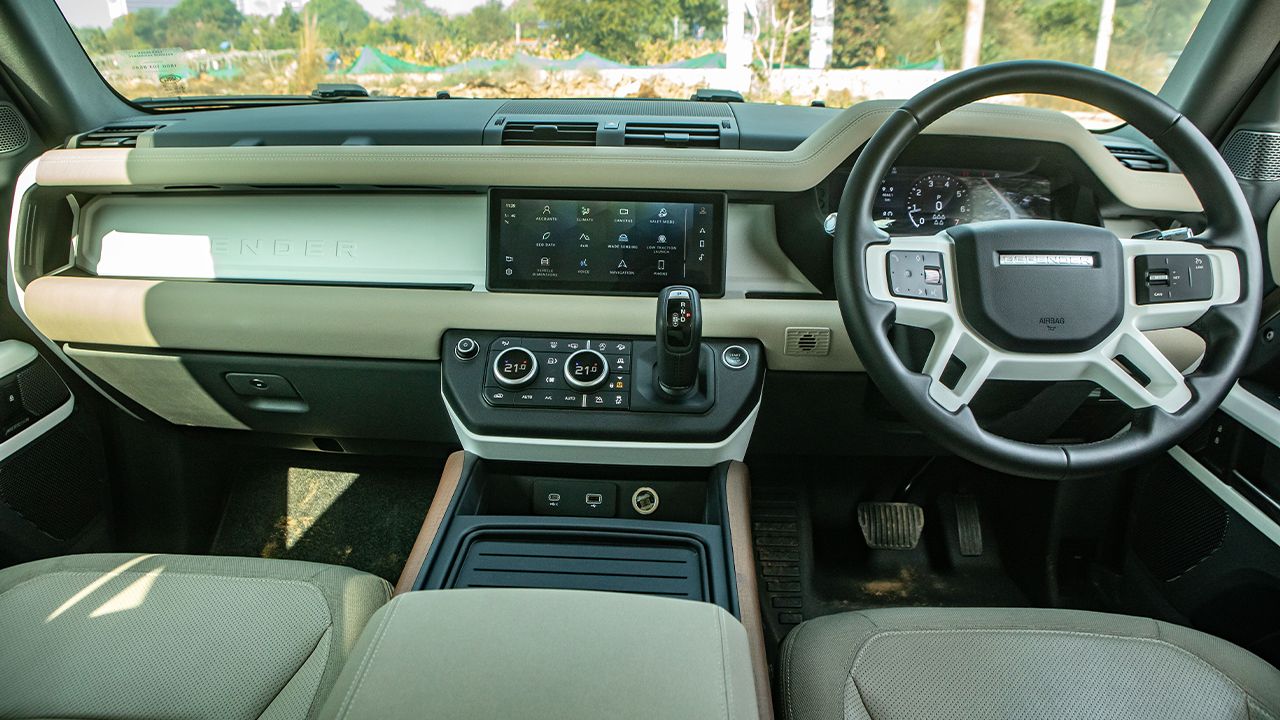 As you enter the cockpit, you’re greeted by a very simple dash layout. There is nothing over the top and futuristic about the cabin – everything is neatly laid out, with functionality being the key point. Its boxy shape renders the entire cabin quite spacious and airy, meaning that there is plenty of space for passengers of all shapes and sizes.

The seats are very comfortable, and the floor has rubber on it, which makes it quite easy to wash and clean it after an intense off-roading session.

It features a 10-inch infotainment system and a 12.3-inch digital instrument cluster, which displays every information about the car. The steering wheel is big and pays tribute to that of the original model. And while the cabin quality isn’t comparable to that of a proper luxury SUV, it’s nevertheless premium in every sense of the word.

The interior of the new Defender is packed with all kinds of new-age tech features, like wireless charging, climate control, and a Meridian sound system. And did I mention that there are more charging ports in this car than any other vehicle that I’ve ever seen? 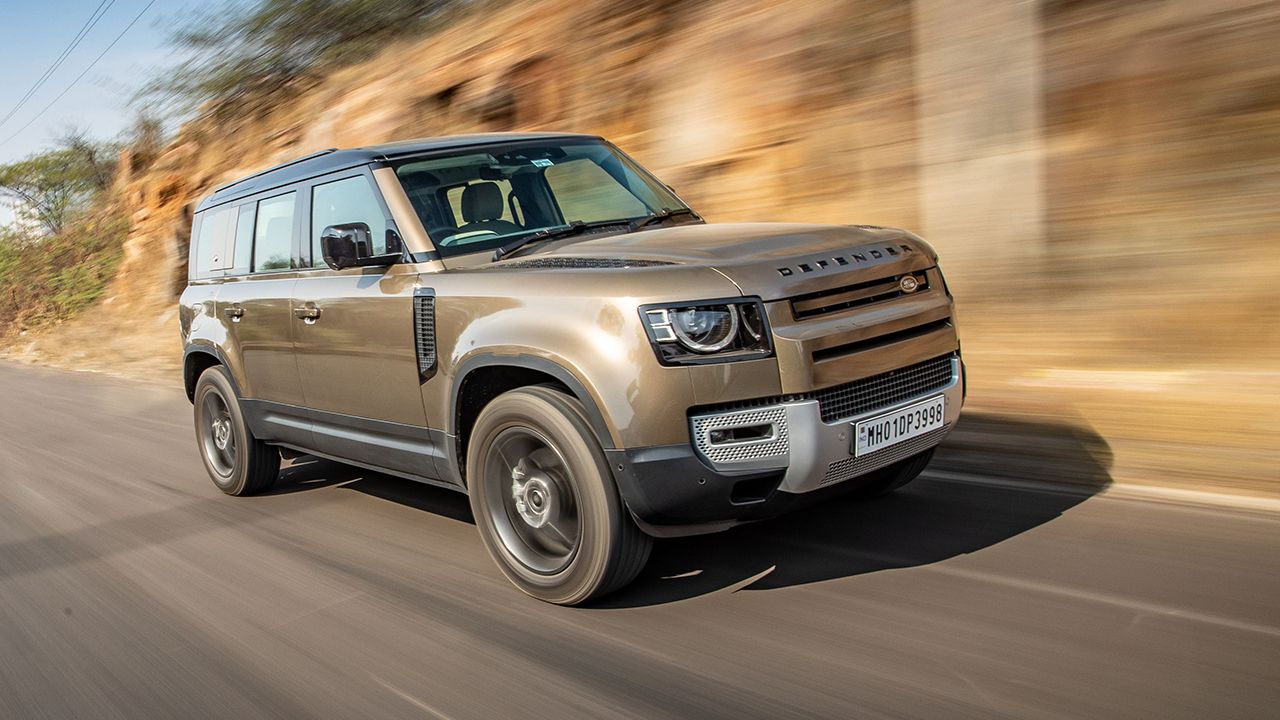 The Defender is currently available in the Indian market, with a 2.0-litre four-cylinder turbo-petrol engine from JLR’s Ingenium line. The engine is good for 296bhp and 400Nm of torque. It’s a very refined and powerful unit, and even for a car of this size and weight (2,261kgs), it works wonderfully well and provides quick and powerful acceleration. It can do the 0 – 100km/h sprint in 8.1 seconds, which is quite respectable.

The 8-speed transmission also works well, although I did feel that it was a little slow at times, even in manual mode. The overall ride quality is really good, and I must say that the suspension setting of this car is great for Indian road conditions. Inside the cabin, you hardly feel any bumps in the road. Even though the car is designed to be a proper off-road machine, it doesn’t feel like one. There is no unruliness, and it drives very well.

The car also handles itself very well for a big and long machine that it is. The chassis is very strong, which allows you to push the car hard. You do however feel the heaviness of the car, but the light steering really helps to make the overall driving experience easy and fun at the same time.

In traffic, its big and bulky size seems more pronounced than it really is, which means that a bit of care is needed to navigate through tight situations. Luckily, though, the new camera systems in the Defender works very well to give you a full view of your surroundings.

The back seat is very comfortable, and if you're one of those who like to be chauffeured around, this car won’t disappoint you. The new Defender is packed with a bunch of tech features to assist the driver. It comes with permanent all-wheel drive, different driving modes, an air-suspension, and a 360-degree surround camera. Safety features on the car include ABS, traction control, six airbags, blind-spot assist, a driver condition monitor, and parking sensors all around.

Although the new Defender has been built to be a well-behaved and comfortable car on the road, its legacy has always been its ability to cross all sorts of terrain. To this end, the new Defender gets a terrain control management system, which allows you to adjust the car’s settings to suit the type of terrain you are driving on. The power output, suspension, and steering can all be adjusted for better and easier drivability.

The new Defender also comes with a lot of new tech features to make the life of the driver easier. For instance, cameras under the side-view mirrors allow you to see the placement and direction of your front wheels. Also, you can see the path of the car on the infotainment screen, which also allows you to see the approach and departure angles, wading depth, and ground clearance.

We tested the Defender at the Off-road Adventure Zone in Gurgaon, and it really left me impressed. The ease with which this car can tackle almost any kind of terrain is simply remarkable. The designers and engineers at Land Rover have done justice to the legacy of the older model. I didn’t have to do much to get the car to steamroll through obstacle courses. Frankly, all I did was to give some minor steering and braking inputs to avoid overturning the car. 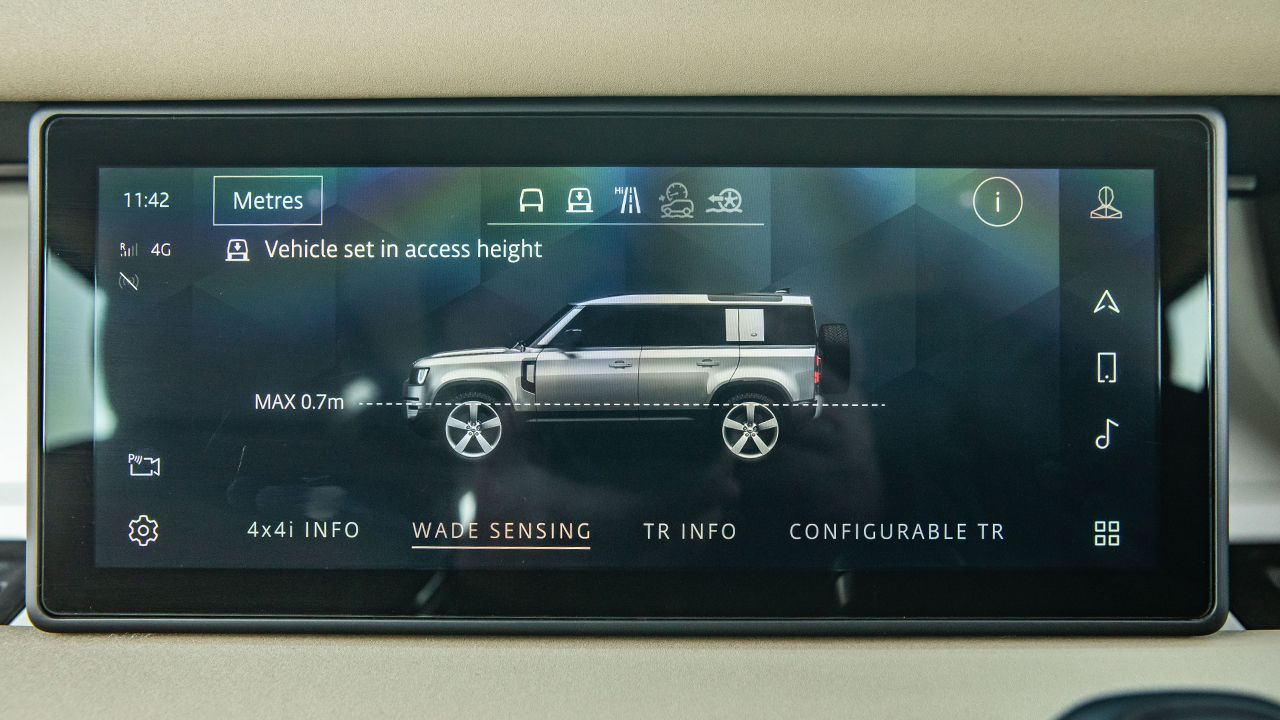 It can really climb steep inclines with ease. The massive ground clearance in Off-Road mode and the high wading depth of 900mm make you feel like you are driving a tank while sitting comfortably in a premium cabin. Land Rover’s Terrain Response system is brilliant, which, along with the locking centre differential and active rear-locking differential, makes it a proper off-road vehicle.

Once you decide to take this tank on the rough stuff, it becomes a completely different machine. It literally dismisses everything that comes in its way. While I do like to be a little more engaged with the controls of a car, I must say that the amount of confidence the new Defender inspires in you when approaching obstacles makes you feel like a professional off-roader. Every aspect and feature of this brilliant machine come together to make it the most amazing SUV I have ever driven. 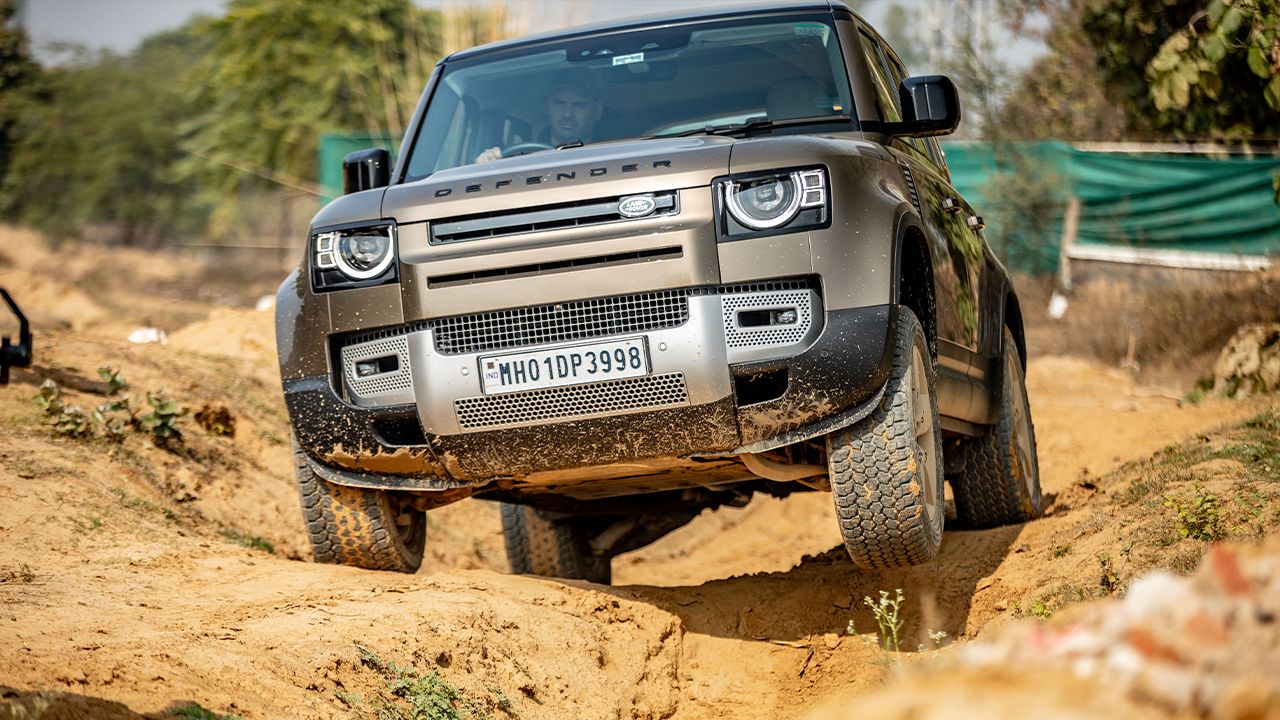 Believe me, I am not exaggerating when I say that it’s truly the most amazing SUV available today. It has great road manners, and it can do almost anything. Its brilliant design and wonderful premium cabin, along with an insane amount of technology, make it an unmatched proposition in today’s market.

There is no doubt that it’s a niche product, and none of the German SUVs can compete with it. Perhaps the Jeep Wrangler is a close contender in terms of capability, but the overall quality, technology features, and road presence of the Defender put it in a league of its own. It’s also not brazenly expensive, which means that it could be a big hit in our price-sensitive market. True, it still isn’t the most practical vehicle out there, but it directly speaks to the adventurer in you.

X-factor: The most capable luxury SUV on the planet!