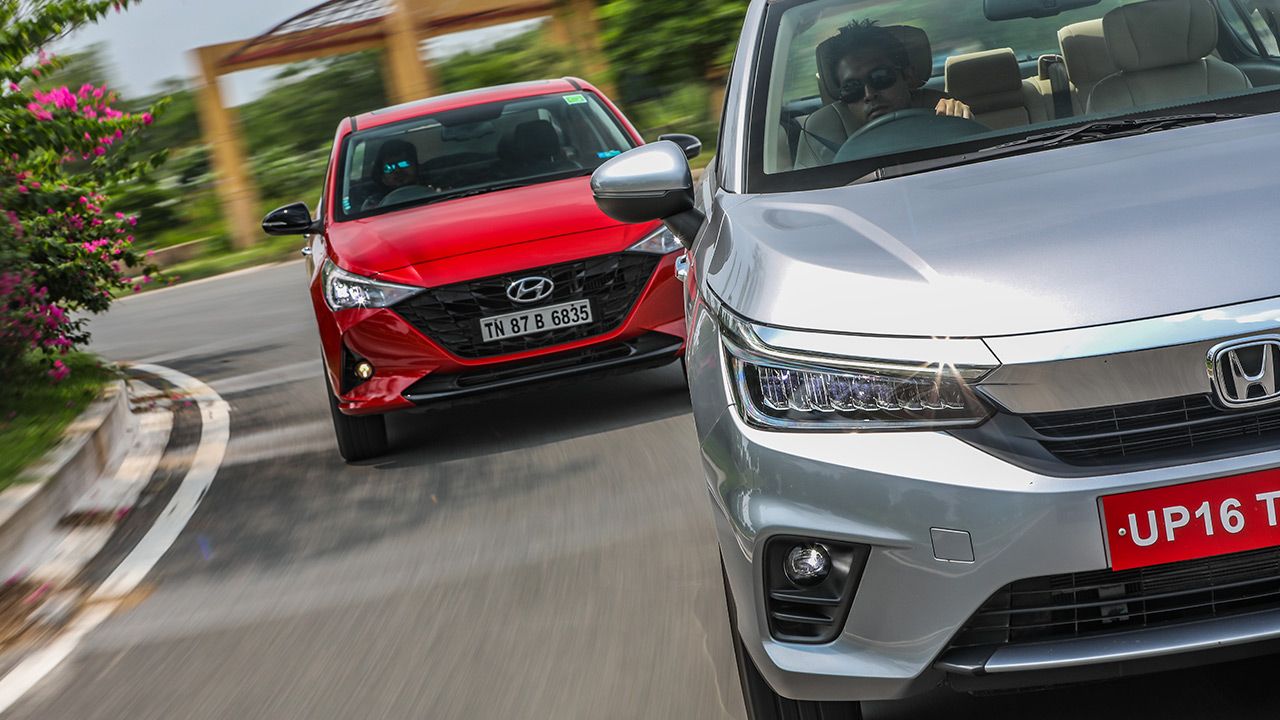 Small capacity turbo-petrols are gradually taking over the mid-size sedan segment, but can they truly take on the best naturally aspirated units? To answer this question, we bring you an epic shoot-out between the Verna turbo and City i-VTEC!

In the early 2000s, there was a lot of buzz amongst petrolheads in the country. Why? Well, because there was a range of exciting mid-size sedans on the market – all of them with strong petrol engines, designed to excite and enthral the family man. There was the Ford Ikon, with its 1.6-litre ROCAM motor, which allowed it to rev like a maniac. Maruti Suzuki’s 1.6-litre G Series petrol engine had a wide powerband and an addictive top-end punch. Hyundai’s top-of-the-line Accent came with more badges than an army general – Hyundai, Accent, Tornado, GTX, 1.6 DOHC, and ABS! It was also the only car in its class to have 100 horsepower, ABS, and an automatic radio aerial that protruded from the rear apron.

All these cars were very impressive in their own ways, and, aside from their engines, they all had one thing in common – a rear spoiler! Then there was the big daddy of them all – the Honda City VTEC. With its twin tailpipes, snazzy alloy wheels, and a big rear spoiler, the City had the looks to match its engine’s brilliant performance. 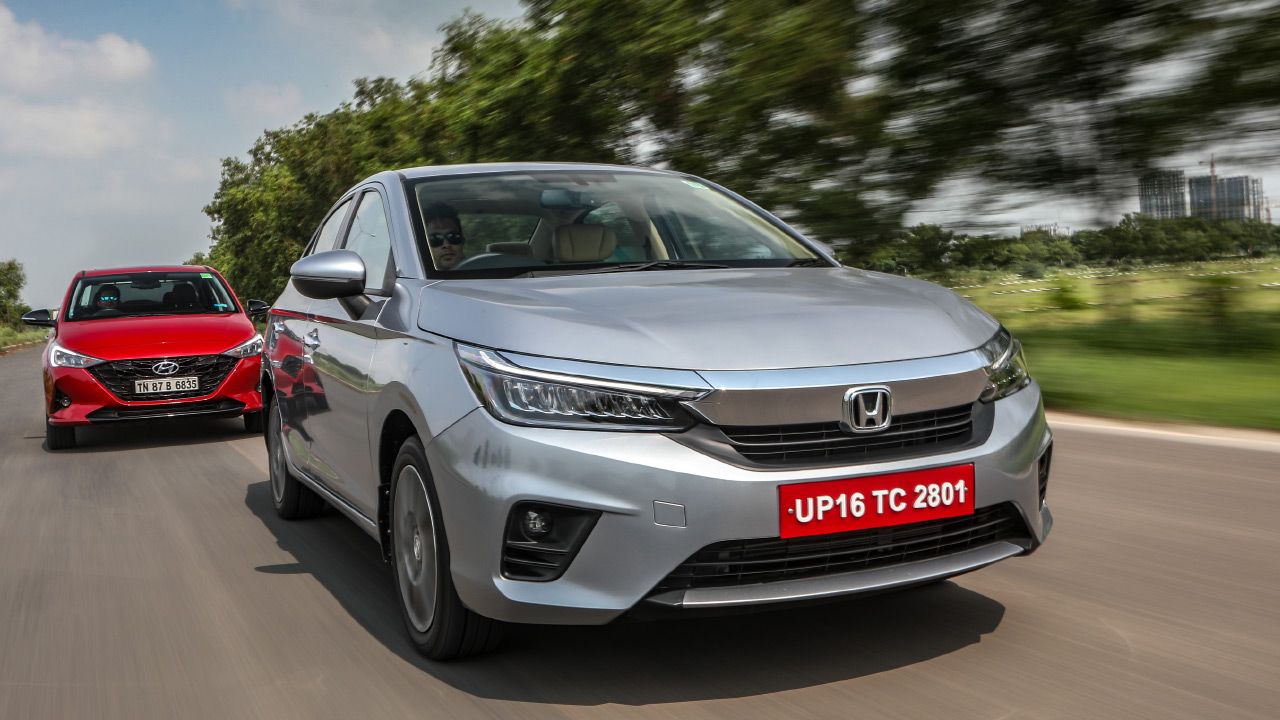 And then, just like that, all of these cars simply vanished into thin air. The reason? Well, the sudden and relentless rise in fuel prices, which made people re-think their choice of automobile. In retrospect, it’s safe to say that one of the direct consequences of the incessant increase in fuel prices was the disappearance of sporty engines and rear spoilers from mid-size sedans.

Once the first-gen City went out of production, the VTEC engine was mellowed down. Ford’s smaller and more economical 1.3-litre engine for the Ikon became its mainstay, and Hyundai’s standard 1.5-litre engine did the job for the Accent. In fact, it was during this time, family car buyers moved towards diesel cars – a move that was further aided by the introduction of cars such as the Accent CRDi and the large capacity Ford Ikon and Fiat Palio diesels. 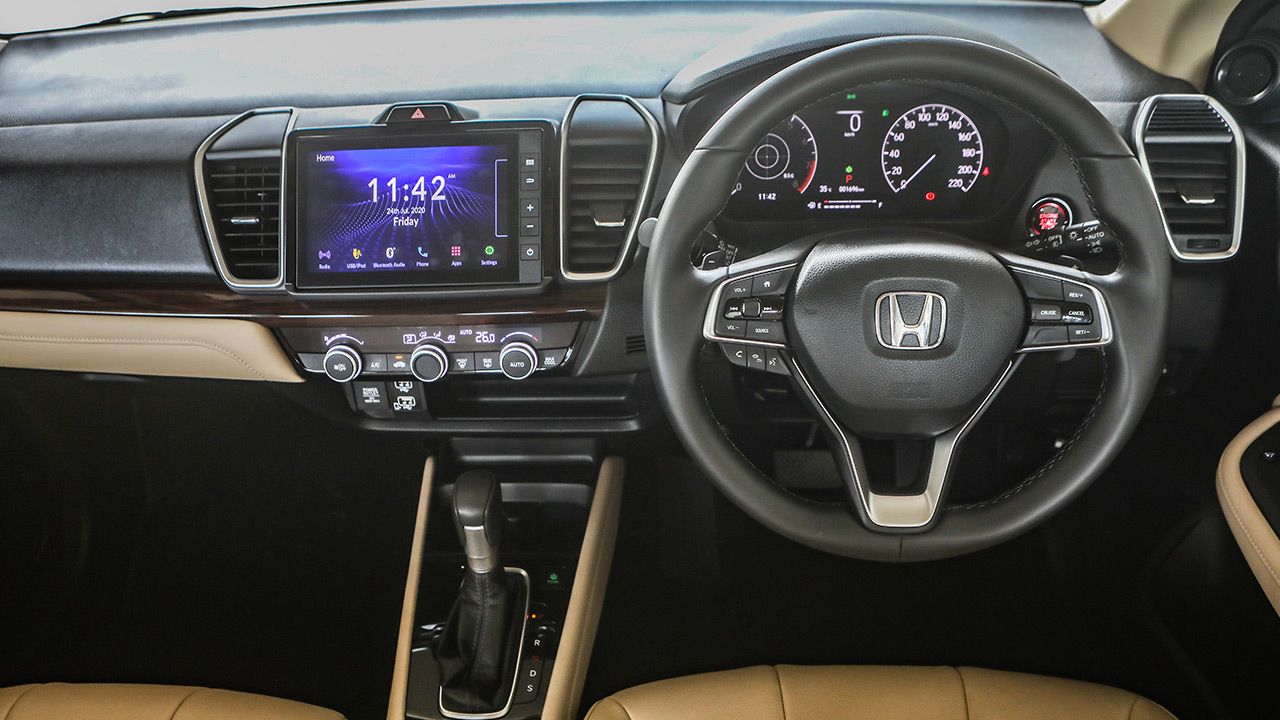 20 years later…
Two decades later, I’m very happy and excited to tell you that the famed VTEC magic is back! Yes, Honda’s new 1.5-litre petrol engine, with dual overhead camshafts, VTC and iVTEC, is a true revelation. This new engine performs well under most circumstances. And, as you go higher in the rev-band, the engine transforms into a different animal – the VTEC scream kicks in and the engine urges you to push it to the rev limiter. The entire experience is addictive, and if you’re someone with a penchant for driving, you’re going to love redlining this car between gear changes.

A new era for petrolheads
At the same time, the whole segment seems to be moving in a different direction right now. Given the new BS6 emissions regulations, players such as VW and Skoda have replaced their naturally aspirated petrol engines with downsized turbo petrol engines in the segment. Maruti Suzuki, however, has decided to continue with its tried and tested mild-hybrid powertrain, which has made a smooth transition to the BS6 era. And Hyundai has brought in a whole new set of downsized engines. At this point, enthusiasts can’t help but expect these new turbo petrol engines to bring with them some much-needed zing in the segment. 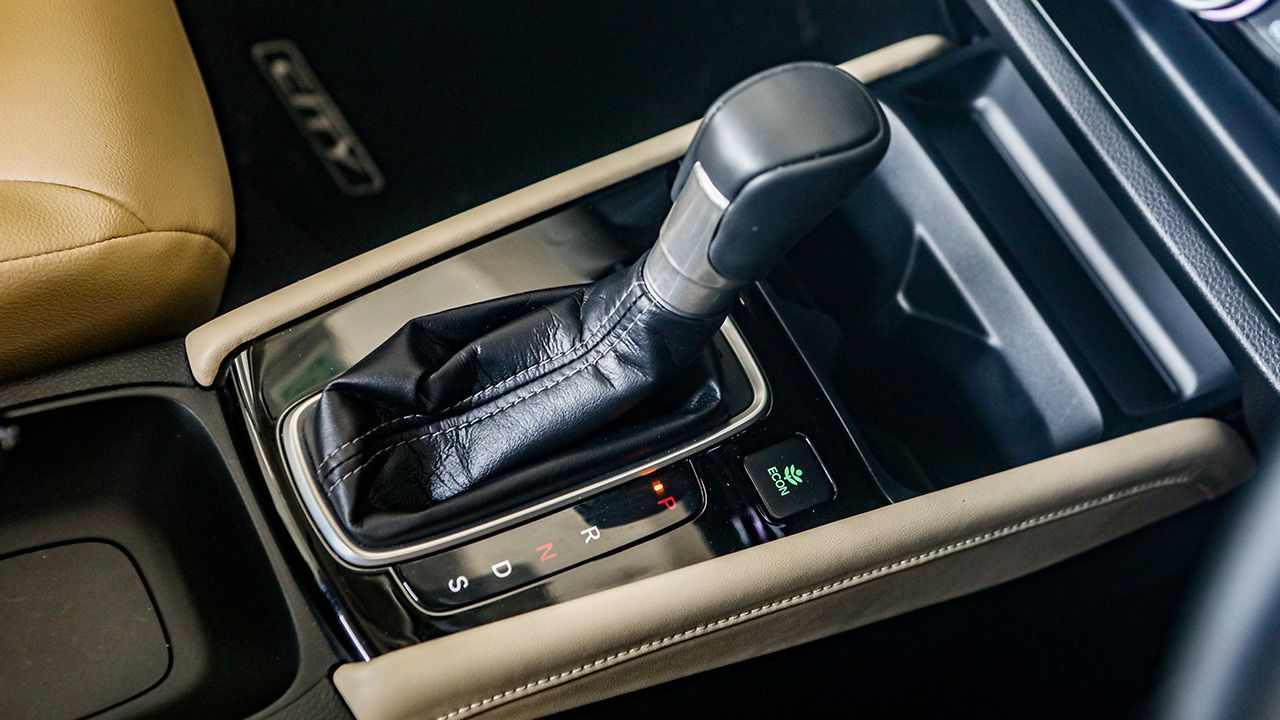 Caution: Turbocharging ahead
For this comparison, we decided to pick the most performance-oriented mid-size sedan to challenge the might of the new Honda iVTEC engine. Enter the new Verna turbo petrol, with a modern double-clutch automatic gearbox. And to dispel any ambiguity regarding its sporty nature, this Verna model abandons the standard model’s chrome bits for gloss black trim elements, a red turbo badge, and twin tailpipes.

Under the bonnet of the Verna lies a 998cc three-cylinder direct-injection petrol engine, which is good for 118bhp and 171Nm, which is mated to a 7-speed DCT. The Verna turbo petrol feels very quiet and refined from the get-go. The powertrain setup is very impressive in urban conditions and offers linear acceleration in the initial stages. The engine is quiet, and the transmission feels smooth and responsive. Couple this with the light steering and the Verna appears to be an ideal city car.

The trouble with the powertrain becomes apparent when you drive faster, as the gearshifts are not as immediate and responsive as VW’s DSG gearbox – which remains the industry benchmark. And while the mid-range, thanks to the turbocharged torque output, feels meaty – typical of a small-capacity turbo engine – it doesn’t feel as free-revving higher up in the rev band. But the gearing is well matched. Pushing it to the limit means that the gearbox upshifts between 6,200 to 6,400rpm, which lands the engine right back at 4,000rpm – readying the motor for another surge of power. 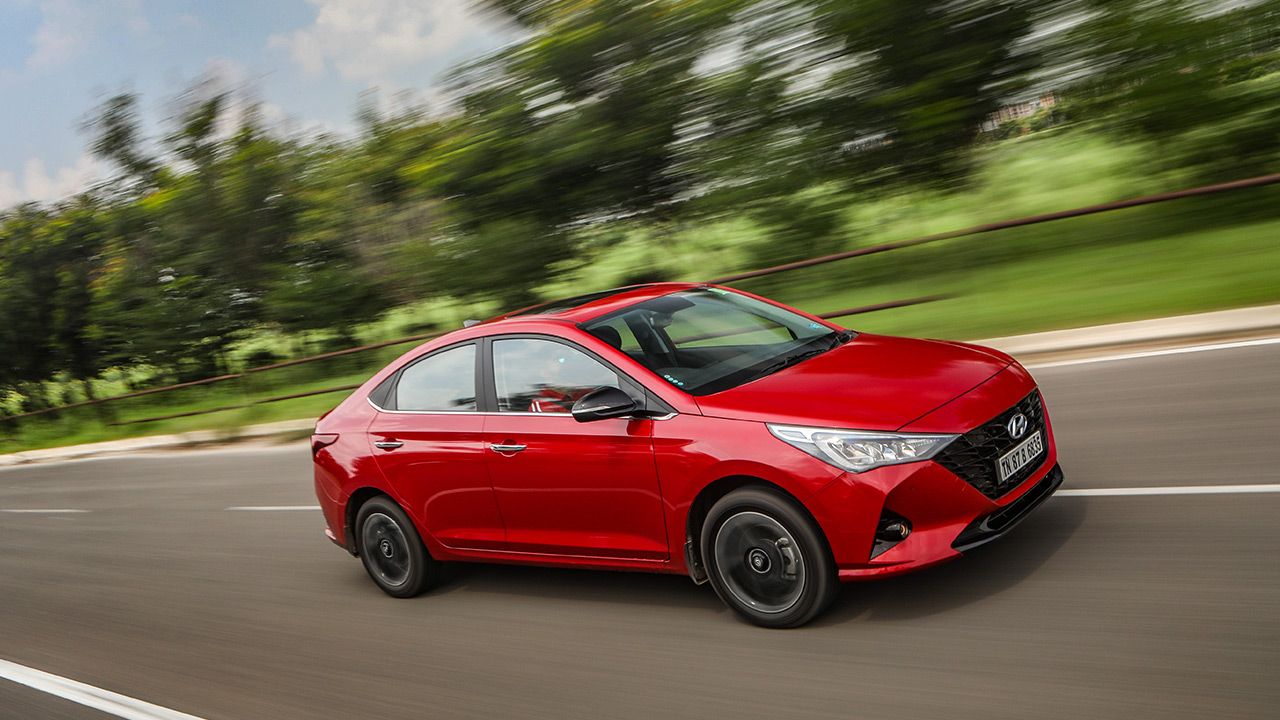 During our performance runs, the Verna turbo DCT couldn’t achieve the desired performance results, as it’s simply impossible to launch the car from a standstill. While the gearbox enables quick-shifting on the move, it doesn’t allow launch starts from a standstill – instead, it sets off gently. And so it’s only after the initial turbo lag is surpassed that you can exploit the meaty mid-range. As a result, we got a modest 0 to 100km/h time of 13.56 seconds.

VTEC for the win
In order to ensure a fair fight, we called in the petrol automatic version of the new City for this test. And straight off the bat, I must say, things are very different in the Honda. You can hold revs before launching the car, which allows it to achieve faster off-the-line acceleration. The low rpm response builds speed like a typical naturally aspirated engine, with a somewhat mellow mid-range – since it's missing that turbo punch! But the engine becomes very responsive as you cross 4,500rpm, after which you can feel the motor’s willingness to be pushed all the way to the 6,500rpm redline. The gearbox delivers a quick upshift at this stage and pushes the car onward, landing the engine in the 5,000 to 5,500rpm range – and here it gets another burst of acceleration. As a result, the City AT is 1.65 seconds quicker to 100km/h from the standstill – with a 0 to 100km/h time of 11.91 seconds. 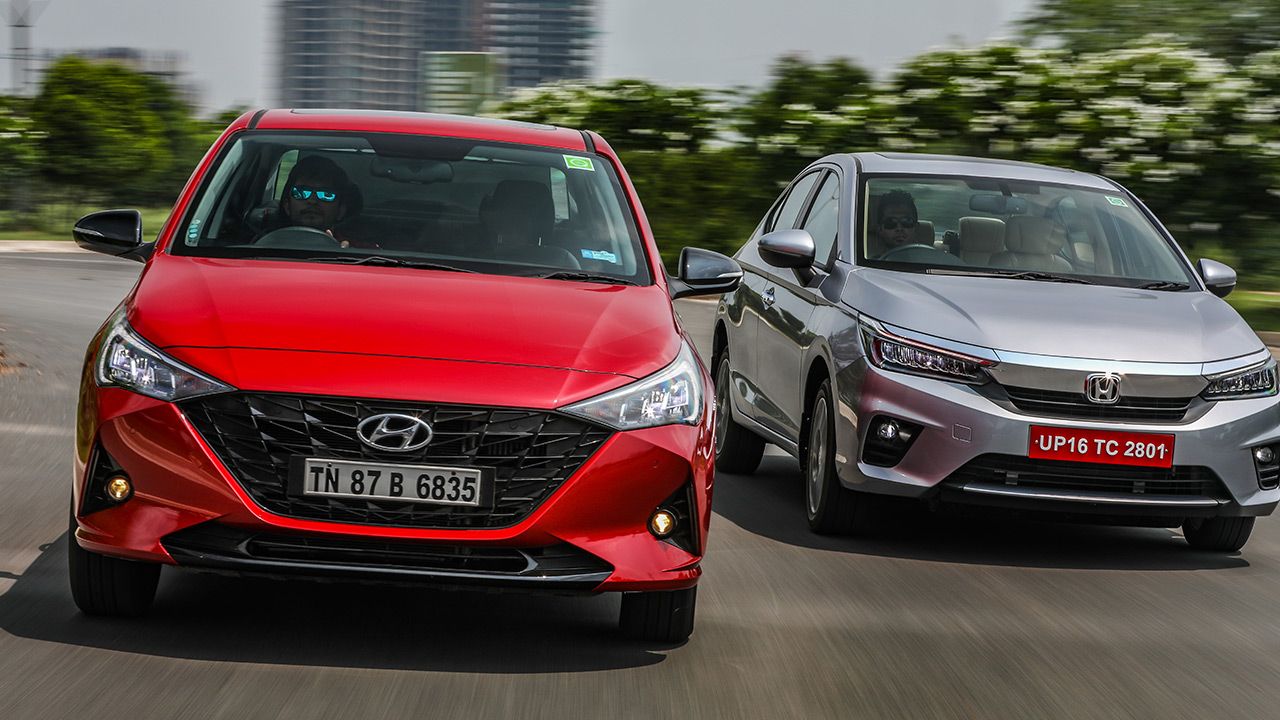 Honda deserves special mention for its quick-shifting CVT transmission, with stepped ratios. The gearbox is very responsive, which is quite surprising when it comes to CVTs. My only complaint is that, at initial speeds, the CVT’s inherent rubber band effect is very evident, which gives the powertrain very high NVH levels. And for this reason, the Verna DCT‘s powertrain, which is far smoother at real-world speeds, is better suited for everyday driving. But if you are an enthusiast, there is no doubt that the City’s powertrain is more responsive when pushed to the limit.

Which is a better sedan?
Performance and driveability are only one side of the story – these are, after all, family sedans. The Verna’s cabin feels fairly tight in terms of space at the back. Now, with its all-black interior, this car feels even more confined for rear seat occupants, even though the bench itself provides plenty of under-thigh support – and there is enough legroom for a 5’8” passenger. If you’re any taller, though, the lack of legroom will be evident. 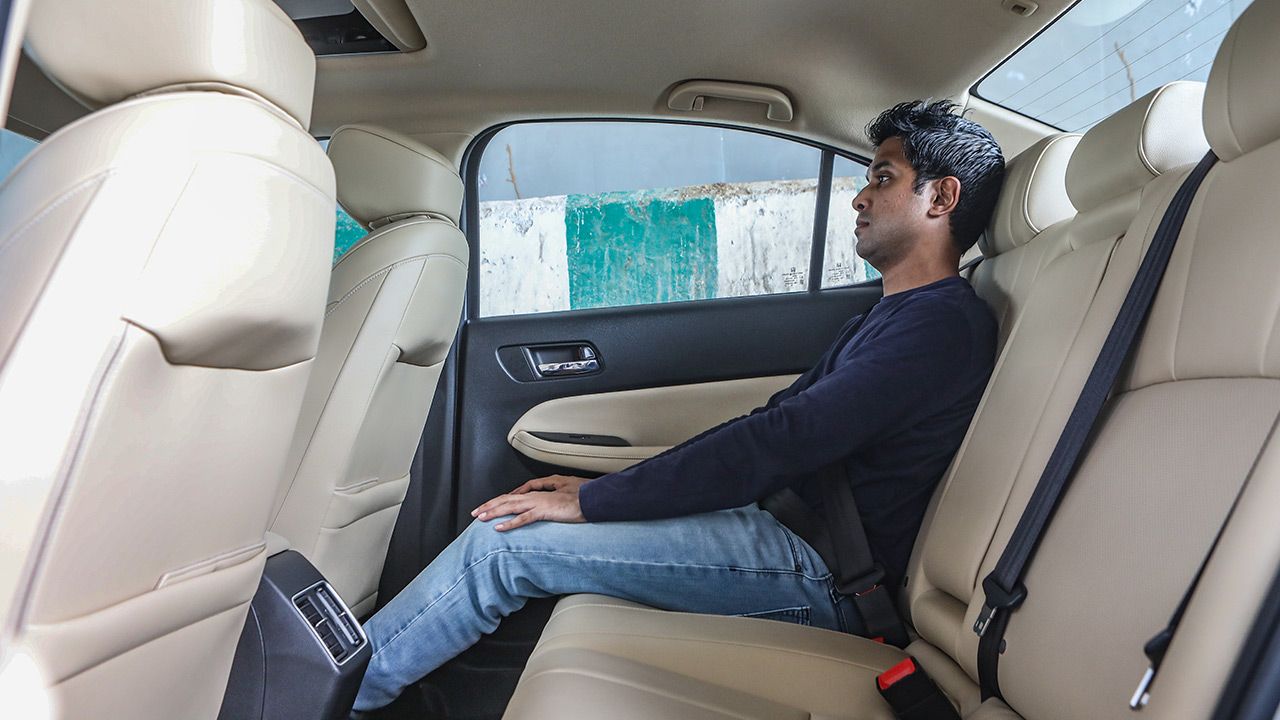 The City, like its predecessor, excels in terms of space. Its dual-tone cabin, with beige upholstery and large windows, feels much airier. Also, it has a lot more space for front-seat occupants. Rear seat occupants, too, will be much better off in the City, thanks to its legroom and cabin space. Ingress and egress are far better in the Honda too, thanks to the wider doors and flatter seat design.

In terms of comfort, both cars offer a comfortable ride. The Verna’s suspension setup feels stiffer over sharper bumps, while the City’s suspension rebound seems better damped. Both cars suffer from body roll around tight bends – the City more than the Verna. But things are better for the Honda driver, as its steering feels better weighed and is more predictable than the Hyundai’s light and quick unit – which is great in traffic but feels twitchy around tight corners at higher speeds. 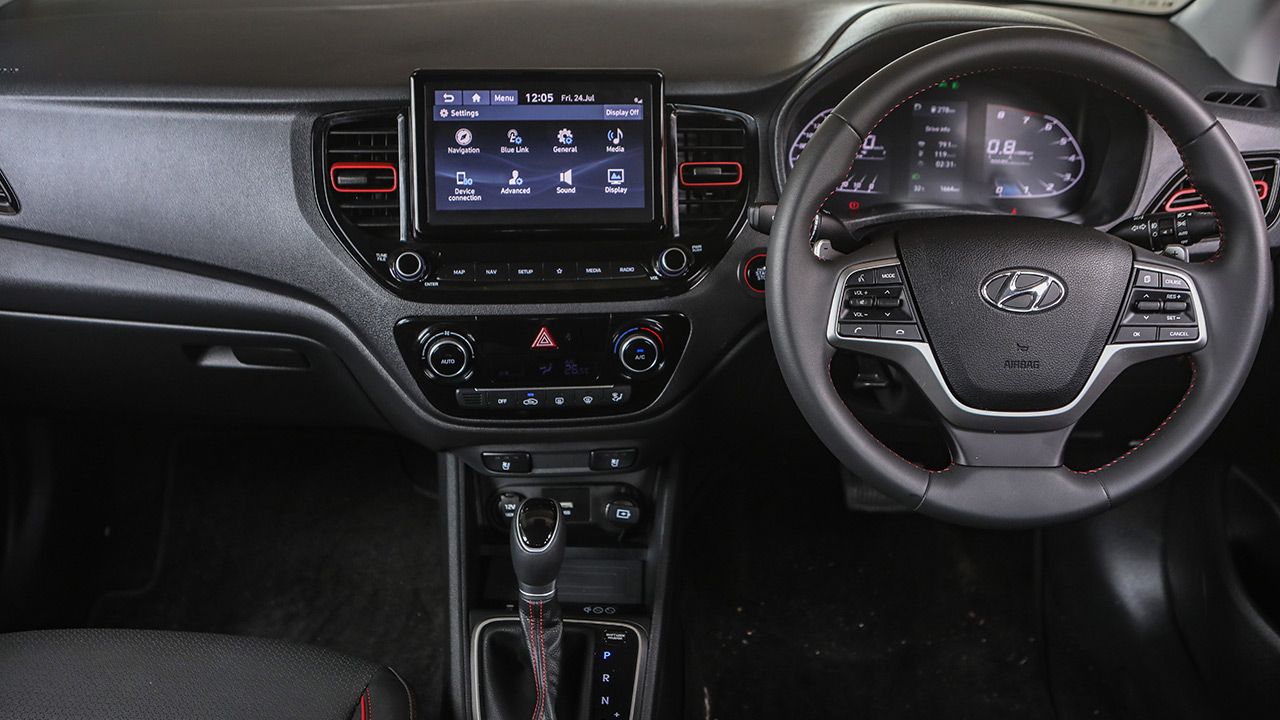 Which is a better buy?
Honda’s conservative exterior design philosophy seeps into its interior as well. While its sculpted dashboard is designed to maximise space and storage, the quality of plastic and switchgear in the Hyundai is better overall. Some soft-touch plastics and new switchgear, such as on the steering wheel and HVAC controls, makes the City feel quite premium in some respects. In terms of equipment, the Verna has wireless phone charging, ventilated front seats, and more, while the City has a blind spot camera for the passenger side, auto up and down functionality for all the windows, and so on. 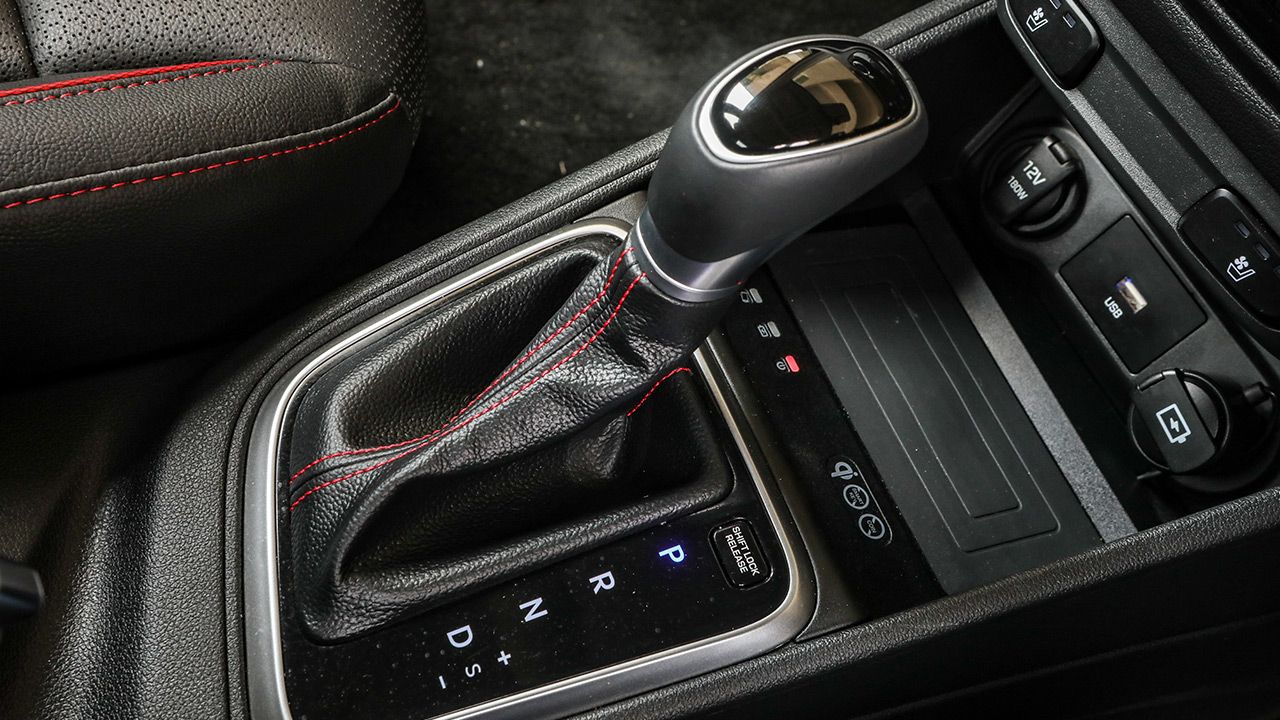 Both cars also have connected car tech, but the Verna wins the equipment battle because of its superior split-screen infotainment system, which looks and operates much better than that of the City, which already feels dated and has a display that appears dim even at full brightness. Not to mention the poor rear-view camera quality and display, which is barely visible in broad daylight. 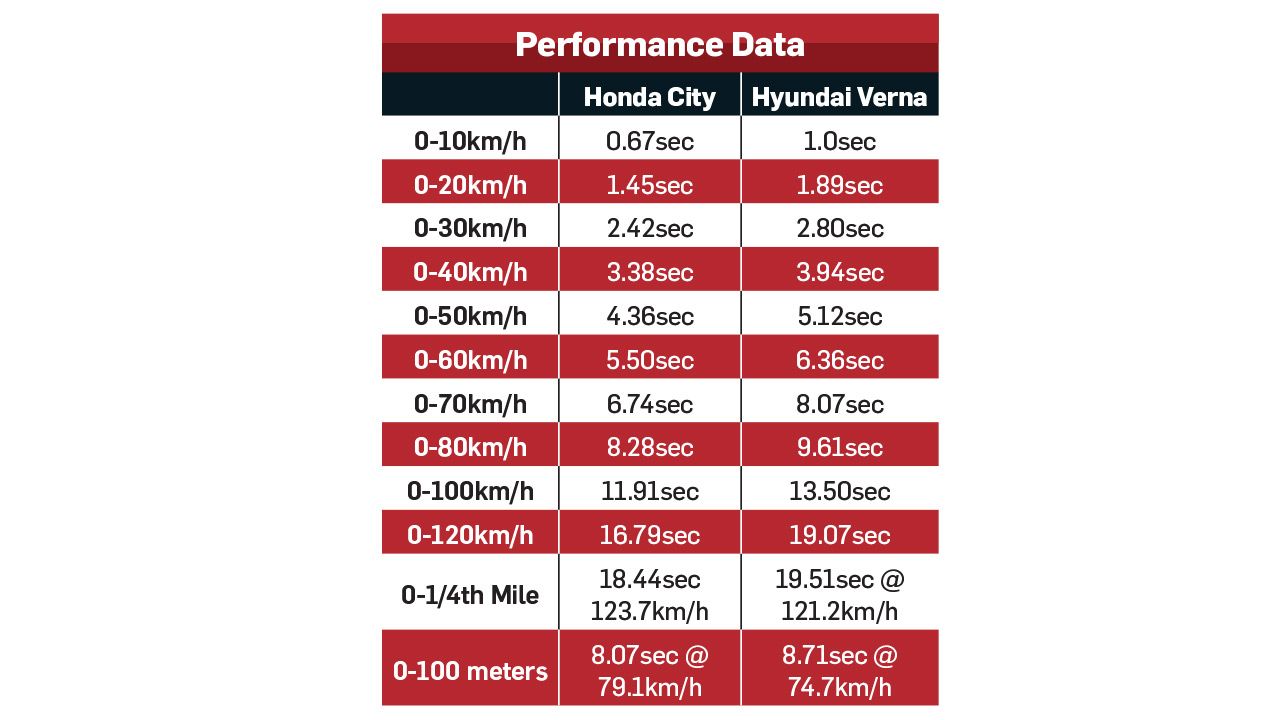 It’s quite evident that both these cars have their share of pros and cons. But the City is the better all-rounder. While the Verna is more comfortable to drive in traffic, the City’s powertrain offers better driveability under all conditions. And it offers more space and comfort too. Plus, you can always enjoy that VTEC soundtrack! 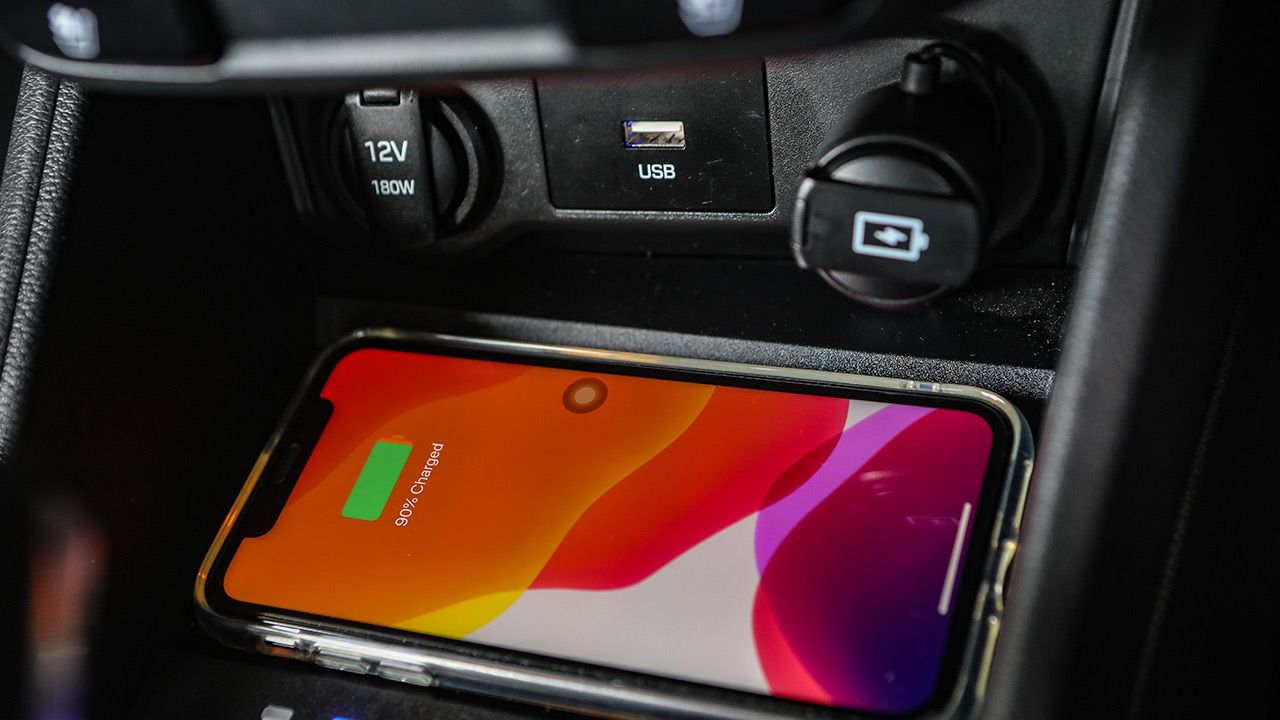 X-factor: The City brings back the magic and moves the goalposts for its rivals once again. 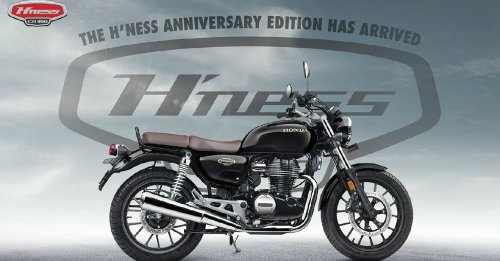 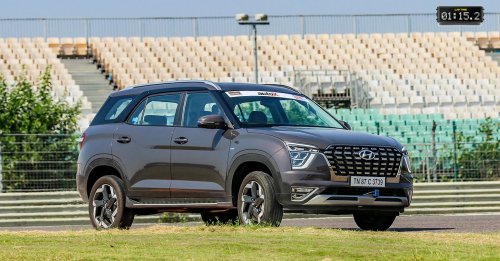 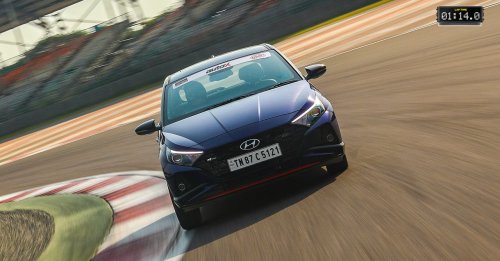