Home » Travel » Let your Nose be your Guide: Hyundai i20 Travelogue

Let your Nose be your Guide: Hyundai i20 Travelogue 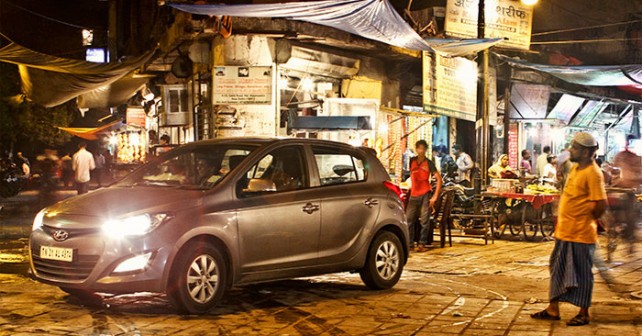 If you’re in Delhi during the month of Ramadan, then let your nose be your guide. Ramadan is a holy month for Muslims, but I’ll leave the spirituality part out here.

This is also a month of gastronomic delight. Go past a mosque or a Dargah in the evening, and you’ll realise that your nose has a mind of its own. Delicious smells waft up your nose from the small lanes and eateries that invariably spring up near even the smallest mosque. And if you happen to be around places like Jama Masjid or Nizamuddin, your nose will likely overload your brain as it transmits all those fantastic gastronomic fragrances. The only way you can save your brain from a grid collapse is to let you nose lead the way to these hotspots.

I couldn’t afford a grid collapse, and so I made my way in the brilliant Hyundai i20 to the narrow lanes of Jama Masjid. This majestic structure needs no introduction. It’s a jewel among the innumerable historic structures that dot Delhi. But the approach road to Jama Masjid is another story. The ongoing Metro construction has left the road in shambles. So, I’m certainly glad that I was driving the i20, as the capable suspension made quick work of the rough roads, while the car manoeuvred easily through the narrow, crowded lanes.

But the bad roads and chaotic traffic was forgotten as soon as I hit ‘food street.’ It was 7:30 in the evening, and it was time for Iftar – the time to break the traditional dawn-to-dusk fast. The courtyard of the grand mosque was lined with men, women, and children, and each had a plate of fruits, nuts, grams, sweets, and a glass of flavoured milk. It was a rather filling serving, but it just didn’t smell delicious enough, so I made my way towards the numerous food stalls that face the main entrance of the mosque.

A hundred varieties of chicken and mutton dishes welcome you, and you’ll be spoilt silly for choice. Other than the famous eateries like Karims where you’ll be hard pressed to find even half an empty chair, there are numerous other eating joints – and a few of them date back to the Mughal era. In this age of all conquering pizzas and fast food, it’s amazing that so many of the traditional dishes still survive – and, by the look of it, aren’t going out of fashion anytime soon.

If your hunger for rich food is still unsatiated, head straight for Nizamuddin – the other hotspot. Nizamuddin has its share of kebabs, roasts, deserts, rotis, different type of naans, and a wide variety of rice. I thought I’d had enough food in me to last me a few days, but a long drive meant that I had reasonable space in my stomach once again. The climate control, bluetooth connectivity, and steering mounted controls in the i20 must have lulled me into a sense of wellbeing – of which good food is an essential ingredient.

The 700 year old Nizamuddin Dargah was lit up, and there were people from all walks of life. I saw a Pandit distributing tea – something he’s been doing here for the past 40 years! And you cant miss the bearded man in a black robe with a trident. The famed Qawali singers of the Dargah were in their element, and the crowd joined in as well. The crowd kept coming deep into the night, and the food stalls had their stoves burning till about half an hour before the muezzin called for dawn prayers.

Over the course of a few days, I had taken the i20 to places like the Matka Peer Dargha, near the Old Fort, and some other mosques in Karbala, Mehrauli, and Sheikh Sarai in Delhi.

If you take the time, you can discover many more places to enjoy proper Mughalai food. And somehow the food tastes much better during the Ramadan, even though most of these dishes are made every single day. I guess the festive atmosphere makes all the difference.

Ramadan is on till the second week of August, so there’s still time to savour the delights. Let your nose be your guide. But don’t forget to carry a digestive tablet along for the ride!