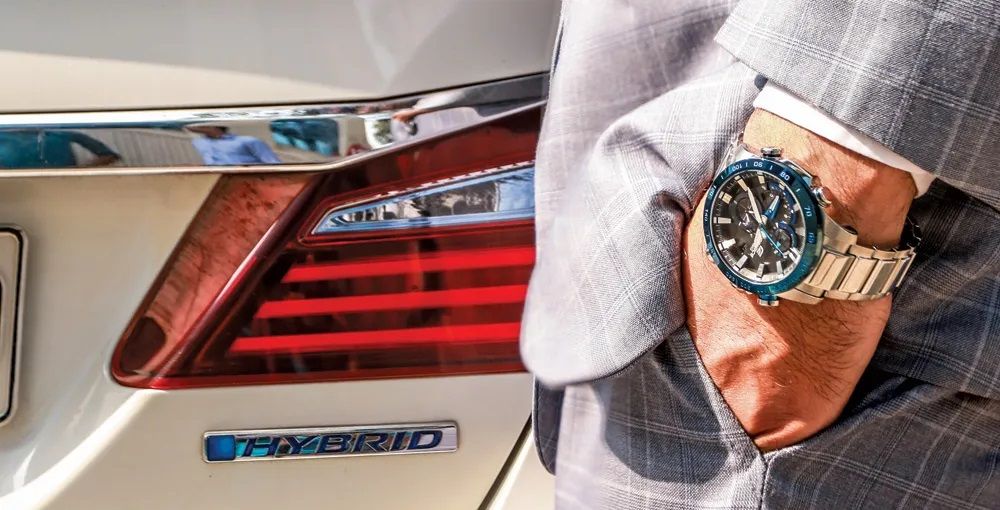 With a number of smart functions, solar charging and a perfect blend of modern Japanese technology, the Casio Edifice EQB-800 aims to be the perfect companion to the tech-savvy traveller of the day. We try one out to see how good a Jeeves it is to the Mr. Wooster of today.

Modern technology plays a huge role in our lives in this day and age, given how thoroughly and effectively it entwines our lives with the world around us. And, interestingly, it’s ever evolving. For instance, look at the humble telephone from half a century ago and its modern counterpart. A telephone was an instrument fixed to a certain spot in your home. Then came the cordless phone, allowing you the freedom to walk around in your house while talking on the phone. And now, we have smart phones – a palm-sized device capable of doing things that previously required a telephone, a computer, a camera, a video camera, a music player, and a few other devices that I can’t immediately think of. It basically makes the entire world accessible from the palm of your hand. That’s technology today, folks! 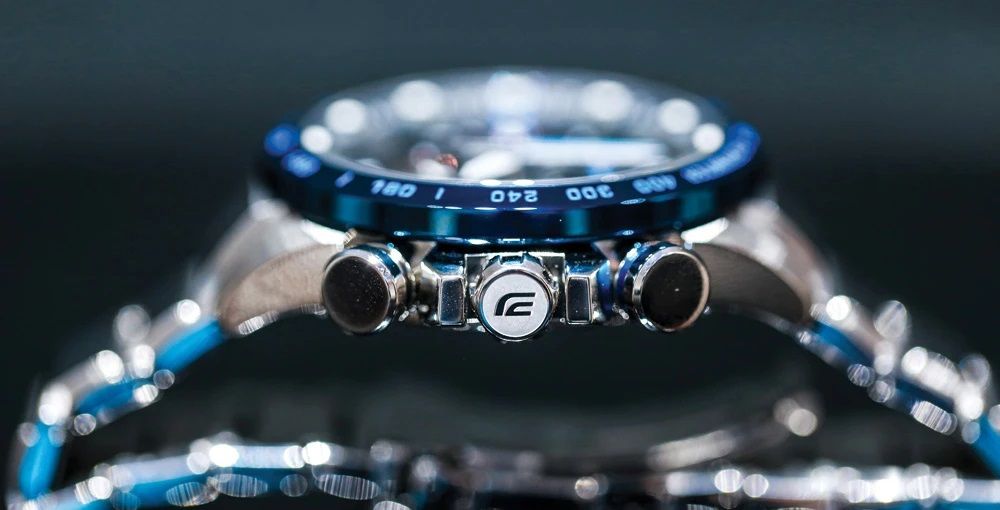 And what about the cars that we drive today? Modern hybrid technology in cars like the Honda Accord allows us to indulge in luxury while still being efficient and eco-friendly. The hybrid powertrain in the Accord can power the vehicle solely through electricity or in tandem with the engine. In a sense, you’re actually making electricity as you drive down the road.

The watch industry, however, hasn’t quite kept pace to the same extent. Traditionally, mechanical watches are to men what jewellery is to women. They’re desirable, stylish and the mark of a connoisseur. I mean, can you imagine James Bond without his watches?

But a watch can still provide a great deal of utility, other than just being a style accessory as you go over to a bar to order a martini… ahem… ‘shaken, not stirred!’ For one, even on the best smartphones, viewing the time in two time zones simultaneously is something that takes much more than just a glance at the screen. But, for a watch like the Edifice EQB-800, it’s a breeze – it’s two dials allow you to do so simultaneously and with ease. 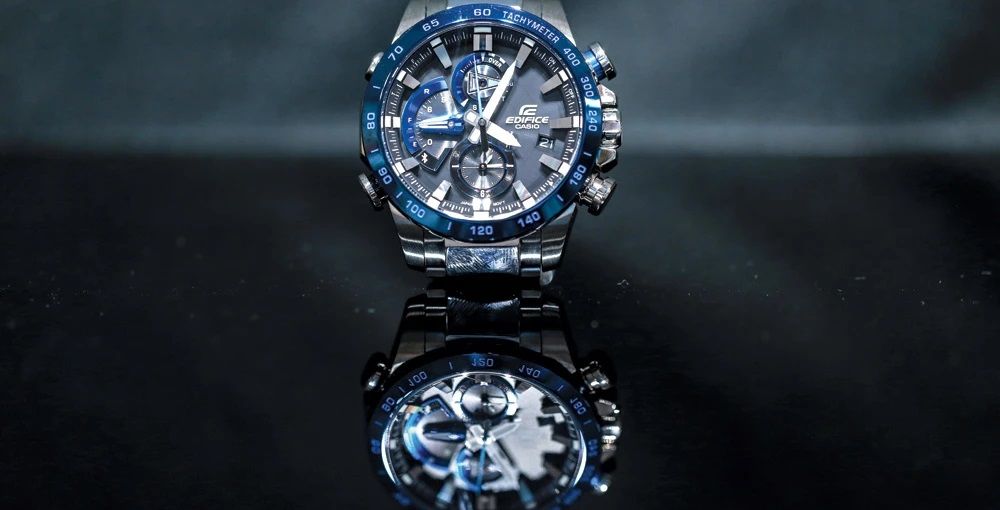 The Edifice seamlessly blends modernity with a traditional approach, and so the EQB-800 enables you to easily adjust the time on your watch to match the time of over 300 cities across the world with just a touch of the button in a smartphone app. At the same time, as a result of the app and its constant connectivity to servers globally, the watch adjusts its time four times every day to be as accurate as possible. Now, that’s quite a feat! But it’s not the end of it. It’s also solar powered – making it eco-friendlier than perhaps a smartphone or a traditional smart watch would ever be.

Also, given that the watch syncs seamlessly with your smartphone app, it also offers the option of finding your phone – should you ever misplace it – by pressing a button on the watch that activates an alarm on your phone. The EQB-800 has been designed in collaboration with the Honda-powered Scuderia Torro Rosso Formula 1 team. As a result of which this chronograph not only provides you accurate lap times but also race lap data, which provides information about the lap to help you go faster. Now, that quite something for a mere wristwatch! Of course, for that, you may need a racier machine than the Accord Hybrid.

From a design standpoint, the blue detailing on the bezel is quite well done and the pushers feel quite good to use. Meanwhile, the large battery reserve indicator, as well as the second time sub-dial, is clear, legible and easy to read. 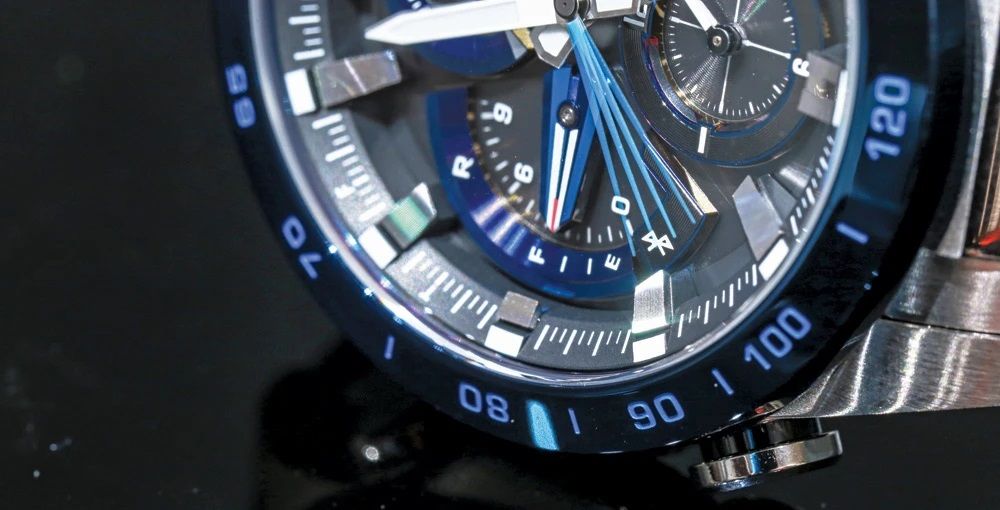 The real value of the Edifice EBQ-800, though, lies in the hands of an avid traveller. It offers a myriad of functions for people who need to keep track of different time zones at the same time, while also reducing their carbon footprint. And, in that respect, in terms of usability and reliability, the EQB-800 ticks boxes that most other watches don’t.

Like a true Jeeves to Mr. Wooster, it’s full of tricks and is loaded with features and capabilities that one would otherwise struggle to find in a single mechanical entity. And, at `23,995, it provides a great deal of value too.