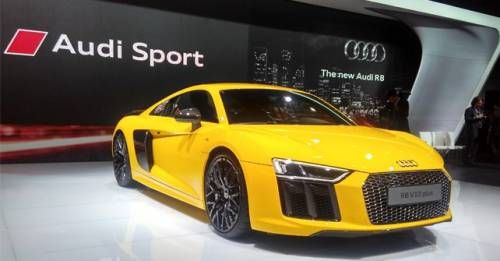 Second-gen Audi R8 launched at the auto expo; new A4 to arrive later in 2016.

There’s no denying the fact that the original Audi R8 is a hugely famous car – not just in global markets, but also in India. Roughly a year ago, Audi unveiled, and subsequently launched, the successor of the R8 in international markets. Now, the German luxury car maker has brought the second-generation model of its flagship sportscar in India. And there couldn’t be a better time, or venue, to launch the new R8 other than the 2016 Delhi Auto Expo.

Priced at a whopping Rs 2.47 crore (ex-showroom, Mumbai & Delhi), the second-generation R8 is now on sale in the country. Internationally, the new R8 is offered in two trims- Standard and Plus. The latter is of course more hardcore of the two, and thankfully, that’s the one which’s been brought to our shores.

In the V10 Plus guise, the new R8 comes with a mid-mounted, naturally aspirated, 5.2-litre V10 petrol engine (same as the Lamborghini Huracan) developing 602bhp of maximum power and 560Nm of peak-torque. The engine is mated to a seven-speed S-Tronic dual-clutch transmission, sending power to all four-wheels via quattro. Audi claims 0-100km/h will be covered in 3.2 seconds aboard the new R8. Top speed (claimed) is 330km/h.

Other highlights of the newly launched Audi supercar include an all- new Audi Space Frame architecture, making the car lighter by close to 50 kilograms while also improving the torsional rigidity by 40 per cent.  Inside, the Audi R8 V10 Plus gets a completely revamped cabin; the 12.3-inch Audi Virtual Cockpit is one of the key highlights of the new interior.

Apart from the newly launched R8, Audi has also revealed that it will launch 9 more products in 2016, including the all-new A4, RS7 Performance and the A8 L Security. All the models are being showcased at the expo.