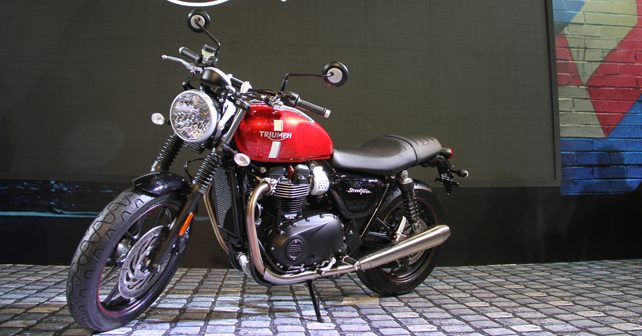 Triumph launches the new Bonneville range including the Street Twin, T120 and Thruxton R at the auto expo.

Triumph Motorcycles has launched the new Bonneville range in the Indian market. The company announced the arrival of three of its latest models in the Bonneville series - Street Twin, T120 and the Thruxton R - at the 2016 Delhi Auto Expo.

The Street Twin is the most affordable motorcycle in the Bonneville range. It’s priced at Rs 6.90 lakh (ex-showroom, Delhi) and will go on sale in March 2016. The entry-level Bonneville is powered by a liquid-cooled 900 cc four-stroke, parallel-twin engine that develops 80Nm of torque @ 3,200 rpm – an increase of 18 per cent over the outgoing model. The engine comes mated to a five-speed gearbox.

Next on offer is the T120 that replaces the old T100. The T120 features an all-new liquid-cooled 1200c parallel- twin engine that develops 105Nm of peak torque @ 3,100rpm – an improvement of about 54 per cent over its predecessor. The T120 comes with a 6-speed gearbox. In addition to the Street Twin, it comes with LED daytime running lamps and tail-light. The T120 carries a price tag of Rs 8.70 lakh (ex-showroom, Delhi); sales will begin in April 2016.

The Thruxton R is also powered by a liquid-cooled 1200cc parallel-twin engine, although it’s been tuned for high power, claims Triumph. In the Thruxton R, the parallel-twin develops 112Nm of peak-torque at 4950 rpm - an impressive increase of 62 per cent. Power transmission duties are carried out by a 6-speed gearbox. Triumph is yet to announce the price of the Thruxton R in India, although it's been confirmed that it will go on sale July 2016 onwards.

Triumph says the new Bonneville range of motorcycles has an all-new chassis and uprated suspension components. The manufacturer also claims the power/torque is more usable in the new models, while special attention has been paid so as to tune the exhaust to produce a richer soundtrack.