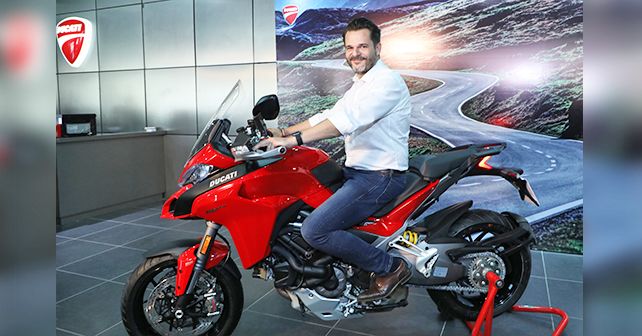 We sit down with Ducati India's head honcho, Sergi Canovas, to talk about the firm's motorcycles, customer programmes, and future prospects.

Let’s start with a simple question – what’s the best-selling Ducati model in India?

It’s a difficult question, actually . . . Let me just say that when people look at Ducati, the first thing they imagine is a sportbike like Panigale. But when you look at the range we have here, there are 27 models across 7 segments. So, it’s difficult to tell which one’s number 1. But still, I’d say the Multistrada and Monster models are more popular in India than others in the range. Also, the Scrambler and Panigale are selling really well.

Between the Multistrada 1260 and 950, do you think customers have a tendency to buy the former, since it’s bigger and more powerful and doesn’t command a huge premium over the smaller model?

Yes, that’s true. Normally, our customers look for really, really sophisticated motorcycles. Forget the 950, even if you take the Multistrada 1260 or the old 1200, most of the customers go for the S variant instead of the standard version because it’s more capable. It’s not about the price but the fact that the S version has virtually every feature and electronics that you’ll ever want in an adventure tourer. As for the Multistrada 950, it’s for buyers who are new to the ADV segment. For first-timers, it’s not as intimidating as the 1260. Although I’ve to say that the 1260 is really an easy bike to ride, the 950 is more accessible in terms of power and electronics. And therefore, an ideal choice for beginners in the ADV category.

Ducati recently introduced DRE in India. Could you tell us more about it?

We started Ducati Riding Experience (DRE) in India this year. The first one was Dream Tour in Himachal, which was a four day trip in the hills. The second edition – Dream Tour Ladakh – will be even longer and will run for over two weeks. It’ll begin in July this year.

Any plans to introduce a similar riding experience or a training school for superbike owners?

You know the DRE doesn’t just include experiential rides like the Dream Tour but also a racing school. It’s a part of the programme, where you learn stuff. It starts with the ‘safety’ session, which we normally do with our customers in Thailand. And that’s followed by sessions on the racetrack in Sepang, Malaysia. We’re planning to bring it here in India as well. Initially, we faced some problems with shipping temporary bikes for track experience, but now that issue is more or less resolved. So, you’ll soon see us organise track days here as well. It’s really very important to have DRE Racing academy here, and we definitely want our customers to experience it in India.

Speaking of sportbikes, how’s the response been for the Panigale V4 in India?

The response for the Panigale V4 has been amazing, to say the least. I mean, we already knew that the feedback from the rest of the world was overwhelming, and as soon as we commenced its pre-bookings in India in January this year, there were lots inquiries for the bike. Within a week, all 20 units were sold! We’ve been asking the headquarters to allot us more bikes since, and, as a result, we got 20 more bikes in April. The deliveries of the Panigale V4 will begin in July, but we’re also hoping to bring in more units because the interest for the bike is really high at the moment.

We think the Diavel is one of the most exotic bikes in the world. How’s it performing in the Indian market?

The Diavel is undoubtedly one of the successful models in our range. For a brief moment in 2017, the sales were halted, owing to the BS-IV norms, but luckily, we had the XDiavel fielding in its place. Again, the XDiavel is also a power cruiser, and the response for that bike has been really encouraging. And now we’re offering both the XDiavel and Diavel in India, so customers have more options. I also have to add that the positioning of these two motorcycles is really interesting. Most of the customers buying these come from the cruiser segment, and what they appreciate is that it retains the typical cruiser experience, while adding sophisticated electronics and more features in the mix.

So, which one is your favourite Ducati motorcycle?

Look, the XDiavel is definitively one of my favourites. It’s a beautiful bike, and every time you look at it, you fall in love with its design. But then you take the Scrambler Desert Sled for a ride and realise that it’s the most fun bike in the range. It’s light and easy to ride, allowing you to do anything and go anywhere. And it’s a very cool looking bike, too. Other than these, I really love riding the Multistrada. You can ride it for hours and never feel tired. The riding experience with the electronic suspension along with the torque that this motorcycle produces makes it really special.

How do you plan to expand your dealer network in other cities?

We’re analysing that for sure, but even now our current dealers are able to cover a lot of the surrounding areas – their services aren’t just limited to a city. This is why you’ll find they've got a bigger sales team than usual, as they take care of our clients in other cities as well. Similarly, we follow the same strategy for servicing. This way we cover all the major cities and our customers also appreciate this.

One last question, will we see a sub-500cc Ducati anytime soon? A small ADV like the BMW G 310 GS or the upcoming KTM 390 Adventure, perhaps?

The sub-500cc is very interesting, but in our case, we design and manufacture our motorcycles all by ourselves. We don’t tie up with any other brand. So, it’s very important to maintain the brand’s consistency. But I look at this segment as an opportunity for the customers to grow. They get into a new segment and eventually they’d want more from a bike. Which is also when they’d try and upgrade to a bigger and more feature-laden motorcycle. And that’s where they’ll find Ducati motorcycles. So, at the moment, that is where we want to be.