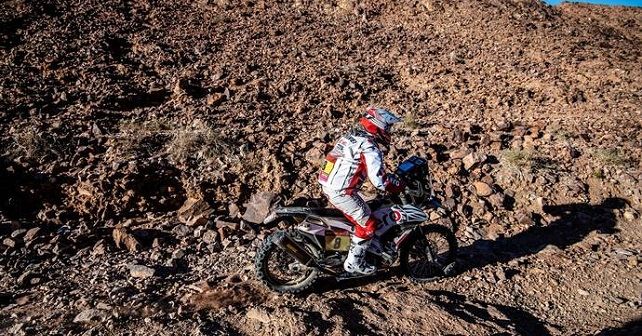 Hero MotoSports and Sherco-TVS finished the second stage of Dakar 2020 successfully, showing steady progress and without any rider retirements. Representing the Indian contingent, both the teams sit firmly in top 20, with Hero’s Paulo Goncalves finishing in 14th overall, followed by Sherco-TVS’ riders, Adrien Metge in 16th and Johnny Aubert in 18th.

Indian riders CS Santosh (Hero) and debutant Harith Noah (Sherco-TVS), too, impressed with their performances today. While Santosh ranks 48th overall, Noah is placed 65th after the end of day 2. Noah's performance is particularly remarkable, considering that he suffered an eye injury on day 1 owing to a nasty crash. Noah was placed 111th on day 1.

As for the other riders representing the Indian racing outfits, Sherco-TVS’ Lorenzo Santolino finished day 2 in 22nd position overall, while Hero’s Sebastian Bühler isn’t too far as he ended the day in 25th spot.

In the overall rankings in the two-wheel category, KTM Racing’s Sam Sunderland sits at the top, followed by Pablo Quintanilla of Rockstar Energy Husqvarna in 2nd and Kevin Benavides of Monster Energy Honda in third.

In the car category, X-raid Mini driver Orlando Terranova is leading the proceedings after the second stage. Drivers chasing him are Carlos Sainz in a Mini buggy and last year’s winner Nasser Al-Attiyah in a Toyota Hilux. Two-time Formula 1 champion Fernando Alonso kicked off the second day of his maiden Dakar Rally in a fine manner, as he was the fourth fastest driver during the first 100km of stage 2. However, as often happens to Alonso, he was unlucky again, for he damaged the suspension of his Toyota Hilux. Owing to this, Alonso lost over two hours and has now dropped down to 48th position from 11th on day 1.

The second stage of the Dakar Rally took off from Al Wajh to Neom for a special stage of 367km. The course was basically a dusty, rocky terrain. In stage 3 of the Rally, riders will cover 404kms as a part of the special stage, which also includes the highest section of the Dakar 2020 at an altitude of 1,400m.