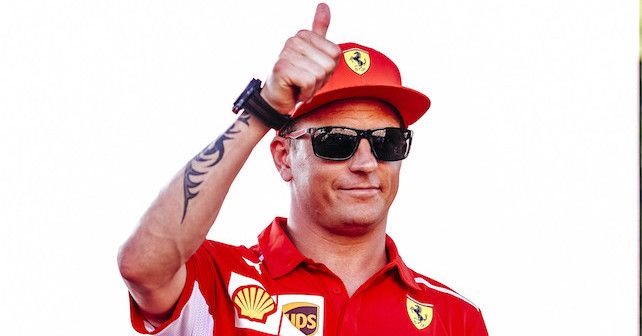 Kimi Raikkonen will leave Ferrari at the end of the 2018 F1 season. (PHOTO: Ferrari)

Kimi Raikkonen, the last driver to win a drivers' championship for Ferrari, will leave the team at the end of the current season to join Alfa Romeo Sauber F1, the team with which he made his Formula 1 debut in 2001. He has signed to race for Sauber for the 2019 and 2020 seasons.

While Raikkonen's departure from Ferrari does not come as a surprise, his move to Sauber does, as many expected him to retire at the end of this season. The move to Sauber from Ferrari, which supplies the Switzerland based team with engines, is seen as both a way to allow Raikkonen to retire within the Ferrari family as well as to make way for the precocious Charles Leclerc.

Leclerc, who will turn 21 in October, has impressed one and all in the F1 community and has often dragged the Sauber C37 to results that are beyond the car's capabilities.

Raikkonen's career with Ferrari has spanned eight seasons, starting with his debut season when he won the 2007 drivers' championship by beating the McLaren pair of Lewis Hamilton and Fernando Alonso to the title by just one point.

Alonso comprehensively out-qualified and out-raced the popular Finn, and since Sebastian Vettel replaced Alonso in 2015, he has not fared much better than his illustrious German teammate who, despite unforced errors last year and this season, has been challenging Lewis Hamilton and Mercedes AMG F1's stranglehold on Formula 1.