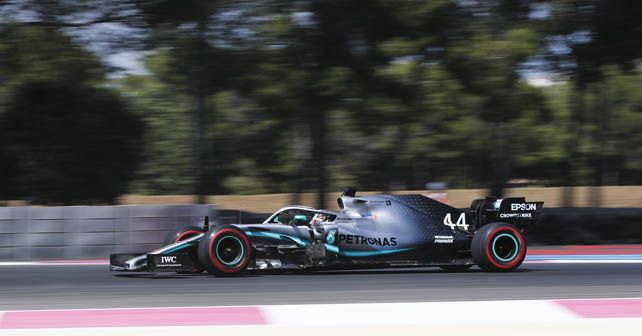 Another Grand Prix. Another dominating performance by Mercedes-AMG F1. The 2019 Formula 1 season is looking like an already done deal since Mercedes-AMG cruised to yet another 1-2 finish this year in the French Grand Prix. Lewis Hamilton led teammate Valtteri Bottas to take the win, while Ferrari’s Charles Leclerc finished in third.

The French Grand Prix turned out to be a procession, rather than a race. As the lights went out, Hamilton rocketed off the line to take the lead from pole, while Bottas followed suit. Leclerc tried to challenge the silver arrows but had to be content with third position in the opening lap. Behind him was Red Bull Racing’s Max Verstappen in fifth, followed by the McLarens of Carlos Sainz and Lando Norris. Sebastian Vettel, who had qualified seventh, made quick progress to overtake the McLarens to take the fifth spot, but couldn’t get anywhere close to challenging Verstappen. For the remainder of the race, the order remained exactly the same, with the exception of Norris losing a couple of places in the final lap, owing to a hydraulic issue in his car.

While Hamilton won the race, Vettel and Ferrari managed to snatch the fastest lap of the race in the very last lap as he pitted for fresh soft tyres. On the other hand, Leclerc came within a second of Bottas in the final lap, but couldn’t manage to overtake the Mercedes. Verstappen finished fourth, ahead of Vettel, while Sainz finished in a lonely sixth position. Norris was running very close to his teammate before his car suffered a hydraulic issue. That also meant he lost the seventh place to Renault’s Daniel Ricciardo. Amidst all of this, he was also passed by Alfa Romeo’s Kimi Raikkonen and Renault’s Nico Hulkenberg, meaning the McLaren driver crossed the line in 10th position.

Hamilton (187) now leads the championship by 36 points from teammate Bottas (151), while Vettel is quite far and down in third with 111 points.